Theft-deterrence of Activation Lock lower than expected in some cities, shows police data 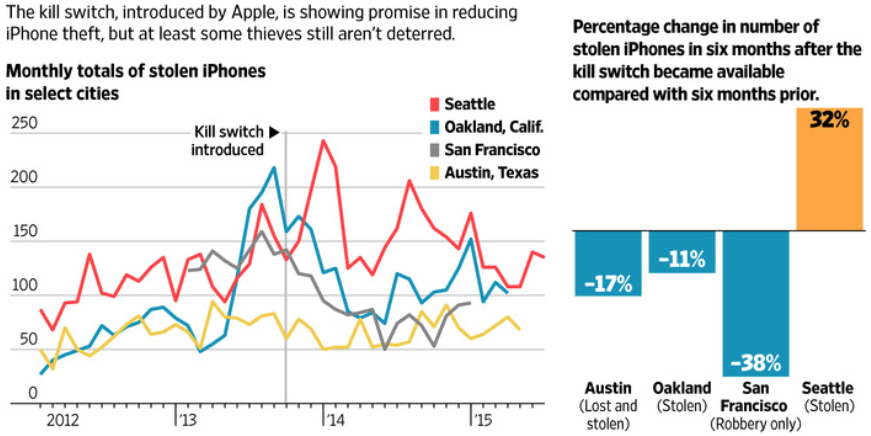 While Activation Lock has dramatically reduced iPhone thefts in some cities, with reductions as high as 50%, police data collated by the WSJ shows that the effect isn’t as great as expected in others. iPhone thefts fell by only 11% in Oakland, by 17% in Austin and actually increased by 32% in Seattle …  END_OF_DOCUMENT_TOKEN_TO_BE_REPLACED

More than 7 months after its official release, iOS 8 has now passed 80% adoption as a version of Apple’s latest mobile operating system is running on 81% of active devices, according to Apple’s App Store Distribution data. The new data puts iOS 8 up two points since this time two weeks ago. The remaining devices include 17% running a version of iOS 7, which is where the upgrades came from, while 2% of devices measured have iOS 6 or earlier.

END_OF_DOCUMENT_TOKEN_TO_BE_REPLACED

Samsung has updated these phones to Android 11

Some things are blindingly obvious in hindsight, and Iconfactory principal Craig Hockenberry and Daring Fireball’s John Gruber made one of these points about the flattening of iOS.

“The flattening of Apple’s user interface that began in iOS 7 was as much a strategic move as an aesthetic one,” says Hockenberry, with Gruber adding that “iOS 6-style skeuomorphism would’ve felt downright gauche on the watch.”

Not just gauche, but also hard to read on such a small display. I think both are right: while Ive may have preferred the minimalism of iOS 7 and 8 on the larger devices, what was a preference for the iPhone and iPad was a necessity for the Apple Watch.

While the information does show the steady climb of active devices upgrading to iOS 8 at a steady, gradual rate, it does not reveal how many users are running the very latest version, iOS 8.2, which is required for iPhone users to pair with the upcoming Apple Watch, which will be released on April 24th… END_OF_DOCUMENT_TOKEN_TO_BE_REPLACED

A user experience expert has put together a video showing that the longer animations introduced in iOS 7 and continued in iOS 8 have a small usability cost: user input is ignored while the animation is running, making the user interface seem slower. The video compares it to iOS 3 running on the original iPhone.

While William Van Hecke believed that the issue was that animations used to be interruptible, this isn’t actually the case except for Springboard. In other cases, iOS has always ignored input until animations are complete, it’s just that they used to be shorter. If you’re fast with your fingers, there will now be times when you’re trying to do something while the animation is still doing its thing.

Do you see this as an issue in real-life use? Let us know in the comments.