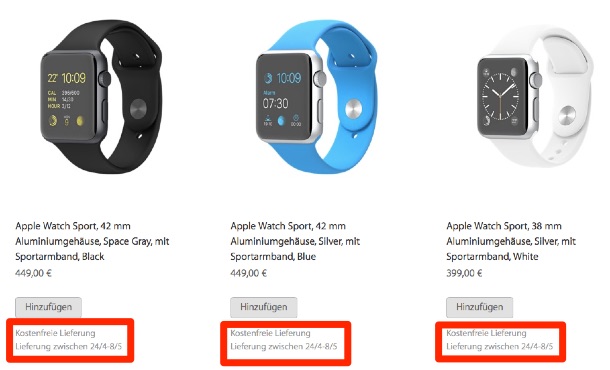 <a href="http://9to5mac.com/2015/04/08/apple-watch-ship-times-4-to-6-weeks-may-for-edition/">Leaked delivery details</a> from Apple.com indicated supply would be constrained.

Update: A reader got a reply from Apple CEO Tim Cook about the situation. See below.

Angela Ahrendts says that Apple expects demand to outstrip supply at launch on the back of tremendous interest from customers viewing watches online and in the Apple Store app. As such, this has forced the company to limit orders to online only for the time being.

“We are excited to welcome customers tomorrow and introduce them to Apple Watch, our most personal device yet. Based on the tremendous interest from people visiting our stores, as well as the number of customers who have gone to the Apple Online Store to mark their favorite Apple Watch ahead of availability, we expect that strong customer demand will exceed our supply at launch,” said Angela Ahrendts, Apple’s senior vice president of Retail and Online Stores. “To provide the best experience and selection to as many customers as we can, we will be taking orders for Apple Watch exclusively online during the initial launch period.”

Apple Watch will be available in the US, UK, Australia, Canada, China, France, Germany, Hong Kong and Japan in Apple Stores for try-on sessions from tomorrow. The Watch will also be featured at the Galeries Lafayette in Paris, Isetan in Tokyo, London’s Selfridges, and some resellers in Japan and China. From April 24th, the Apple Watch will also be on display in ’boutiques’, such as Colette in Paris, Dover Street Market in London and Tokyo, Mayfield in Los Angeles and The Corner in Berlin.

As 9to5Mac has previously reported, all customers visiting the Apple Store in the launch countries will be able to see all three models, although try-on sessions for the Apple Watch Edition are limited to only a select number of locations. Apple Watch demo stands will let walk-in customers play with watch faces and other features, no appointment necessary.

Update: Tim Cook replied to a reader, which helps to clarify the situation a bit. Cook says ‘This isn’t different from other new products’.

A number of units will be delivered on the 24th but it is unlikely every unit ordered tomorrow will be delivered on the 24th. This depends on how many units are ordered for a specific SKU compared to the supply we have of that specific SKU. This isn’t different from other new products. Sometimes demand exceed supply for a period of time. I can assure you we are working around the clock to get as many units to customers as fast as possible.

There will be an order limit of 2.

The Badger fans and team were very classy. Of course, I loved the outcome but it was one of those games either team could have won.