Tumblr is out today with a brand new version of its blogging and community app for iPhone and iPad. Version 4 adds several new features like the ability to create new blogs from your iPhone or iPad and create video posts quickly by pasting YouTube or Vimeo URLs into a new post. The update adds a new widget for the Today section of Notification Center on iOS 8 for quickly seeing which tags are trending on Tumblr when you’re not using the app and much more.

Previously, blog creation was only available through the web interface while the iOS app served as a way to manage a blog you already created or follow other blogs. Now Tumblr says you can “make it, name it, give it an avatar, give it a header image, title it, describe it, post your first post to it” right from the iPhone and iPad app. No web browser or computer required.

Tumblr says its new video embedding feature was the most popular request among its mobile app users. Similar to other blogging platforms, the Tumblr app on iPhone and iPad can now translate URLs for videos on YouTube, Vimeo, and similar sites automatically into video embeds for new posts without requiring any coding.

Search is also more capable in the new version. Tumblr for iPhone and iPad now offers filters when searching the platform for content including photos and chats. Great way to quickly find the GIF you’re looking for… and Tumblr says GIFs now “load in a much more pleasing fashion.” 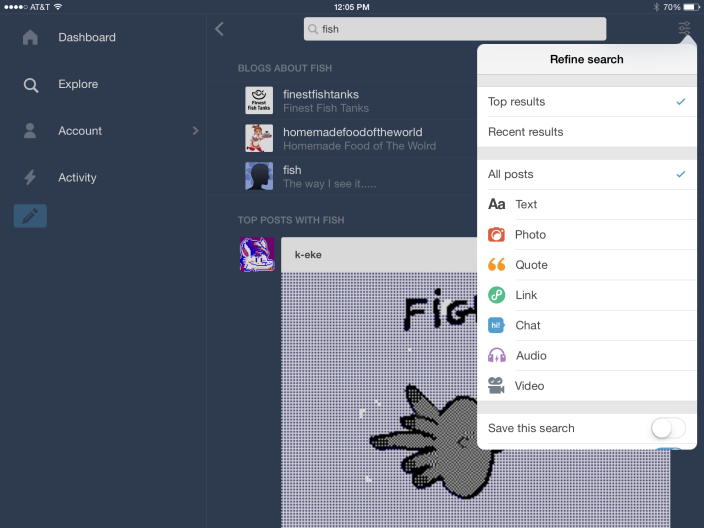 Tumblr 4.0 for iPhone and iPad offers several other features and changes in addition the those highlighted above right down to a new icon, blog submission support, blog deletion, a sticky search bar and sticky avatars, and a redesigned iPad app. Grab the latest version for free on the App Store and check it out.