Pixelmator for the iPhone launching tomorrow, we go hands on (update: now available!) 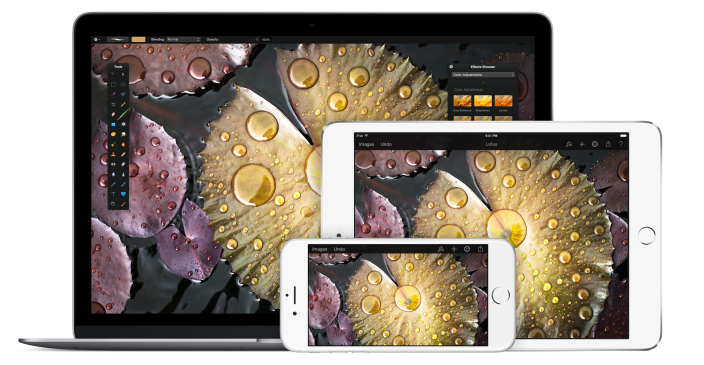 Update: Pixelmator for iPhone is now available. Download it here.

Pixelmator is releasing an update to its iOS app tomorrow, making the app available on the iPhone for the first time ($4.99). The universal app means you can buy once and download Pixelmator on both iPad and iPhone. Existing iOS users of the app naturally get the iPhone version for free as an update. The new version also brings the Distort tools, like warp brushes, to the iOS app for the first time.

Pixelmator for iPhone works very similarly to the iPad version but scaled down for the smaller canvas. You can read our full review of the iPad app from last year. Rather than popover panels, selecting an action opens full-width menus encapsulating options. This is a necessary concession for the size of the display.

Even on an iPhone 6, there just isn’t the room to have the same freedom as with an iPad or Mac. Although the Pixelmator team has done a good job of porting the app, I still find it painful to get anything done due to the lack of screen real estate. There are too many taps and too many contextual menus required to get anything done. Although every feature of the iPad app is present here, it’s generally a lot more frustrating to use.

In landscape, the experience is a bit better due to the improved aspect ratio. You can drag out a view of the current layers in the image by swiping from the left edge. In landscape, Pixelmator for iPhone feels very similar to Keynote, but obviously its a layer stack and image preview rather than a slide deck. In landscape, tools windows use the elongated width to reflow controls into a long toolbar which helps with usability.

However, you still suffer the same modality problems brought about by the lack of screen space. It takes too many taps to do anything and it’s prone to misclicks on toolbar buttons. During my testing, I had to use the Undo feature on several occasions to remedy these inadvertent scribbles.

If you are downloading Pixelmator for iPhone as a standalone image-editor, then you should reconsider. Although it is possible to do some more serious editing (such as using the Retouch tool to eliminate small objects from a scene), you’ll get annoyed with the experience.

The best way to use Pixelmator for iPhone is as an accessory to the iPad and Mac apps, using iCloud to sync documents and apply final/quick adjustments to projects on-the-go with the phone. It is akin to the utility of Apple’s iWork apps on the iPhone. They serve as nice conveniences to continue working on documents created on the Mac or iPad.

The distort tools work as you would expect — and to be clear — appear on both the iPhone and iPad versions. The Mac app has had these features for some time. Pick a warp, bump or twirl and then just trace over the image with your finger to apply the effects. Pixelmator uses a Metal rendering stack for optimum performance.