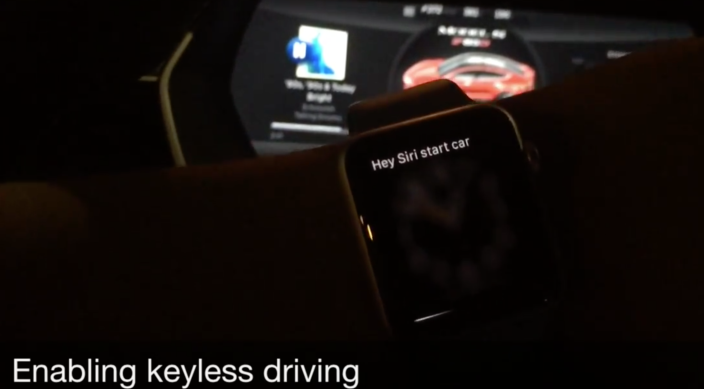 Last month we saw a rather glorious video demonstration of how the Apple Watch can remotely control the Tesla Model S with the right software, and now that app’s developer has gone a step further by adding voice commands like remotely starting the car to the demo using Siri. Check out the video below: The previous demo was impressive enough with features like remotely locking and unlocking the car and monitoring speed from the watch, and now the developer has added voice commands that can be enabled by using “Hey Siri” commands.

In the video demo, developer Allen Wong shows off a few key examples including starting the Tesla Model S with a voice command, enabling climate control inside, and even opening the sunroof all hands-free using the watch. The software is currently in development and the overall performance seems a bit slower than other methods might be, but the prospect of not only controlling the Model S from the Apple Watch but also using voice commands on the watch seems really futuristic.

Apple’s Jeff Williams did call the car the “ultimate mobile device” when speaking at a conference last month and there is that whole Project Titan electric car project underway at Apple. Maybe one day we’ll see CarPlay get a little more serious in this space and see the Apple Watch play a key role there. One can dream. Until then, you’ll need a Tesla Model S and the upcoming Remote S app to make living in the future a 2015 experience.