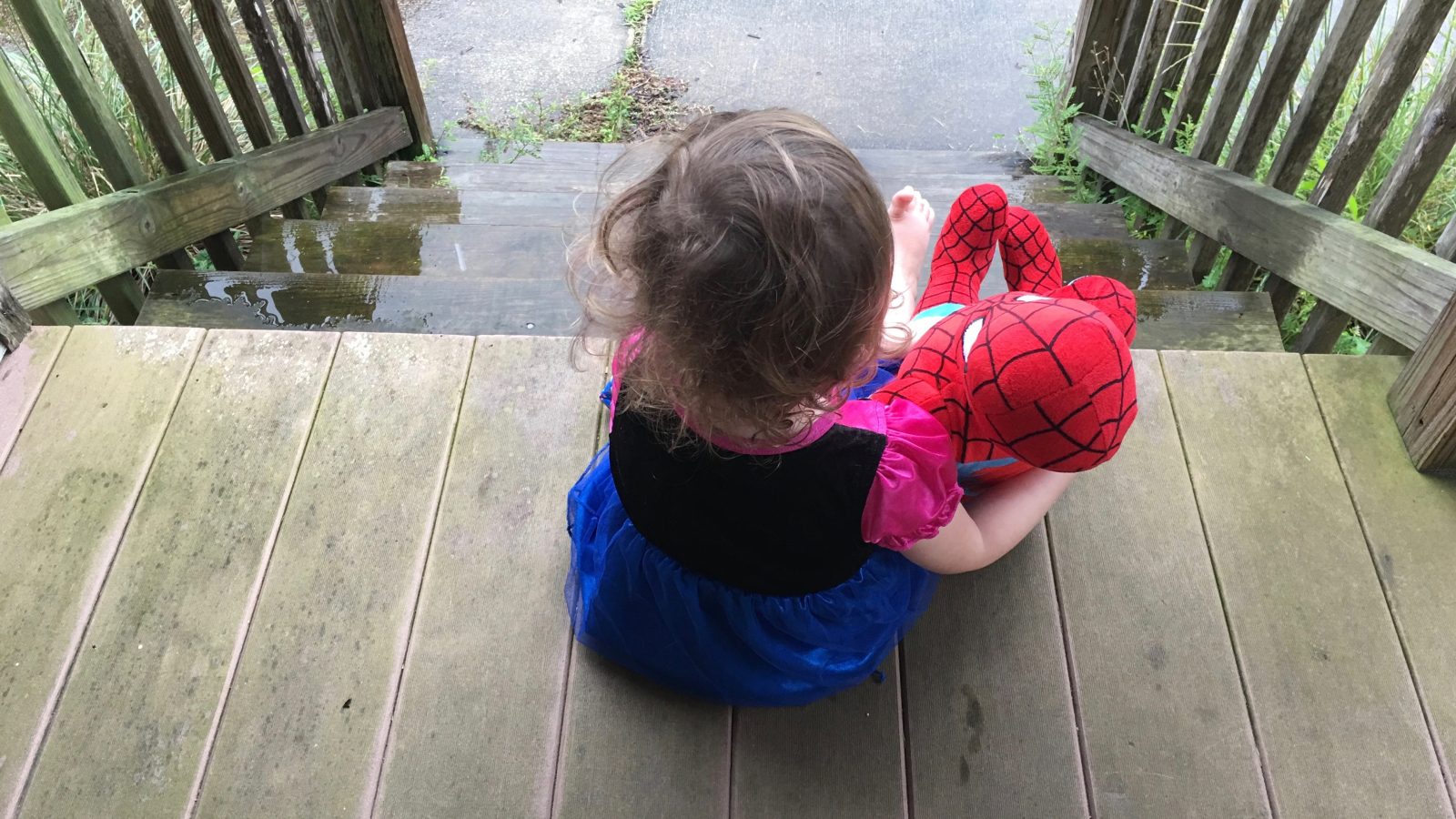 But despite obvious day one omissions in the Live Photo experience, I’m honestly quite surprised at just how much I appreciate the new iPhone 6s/6s Plus feature. Using my iPhone 6s Plus for a full week now, my take on Live Photos has evolved from “curious but confused” to “I get it but when should I use it?” to wishing I had Live Photos years ago. Read on for how I believe Apple can improve the Live Photos experience and how the new iPhone 6s feature has changed my approach to shooting photos and videos… 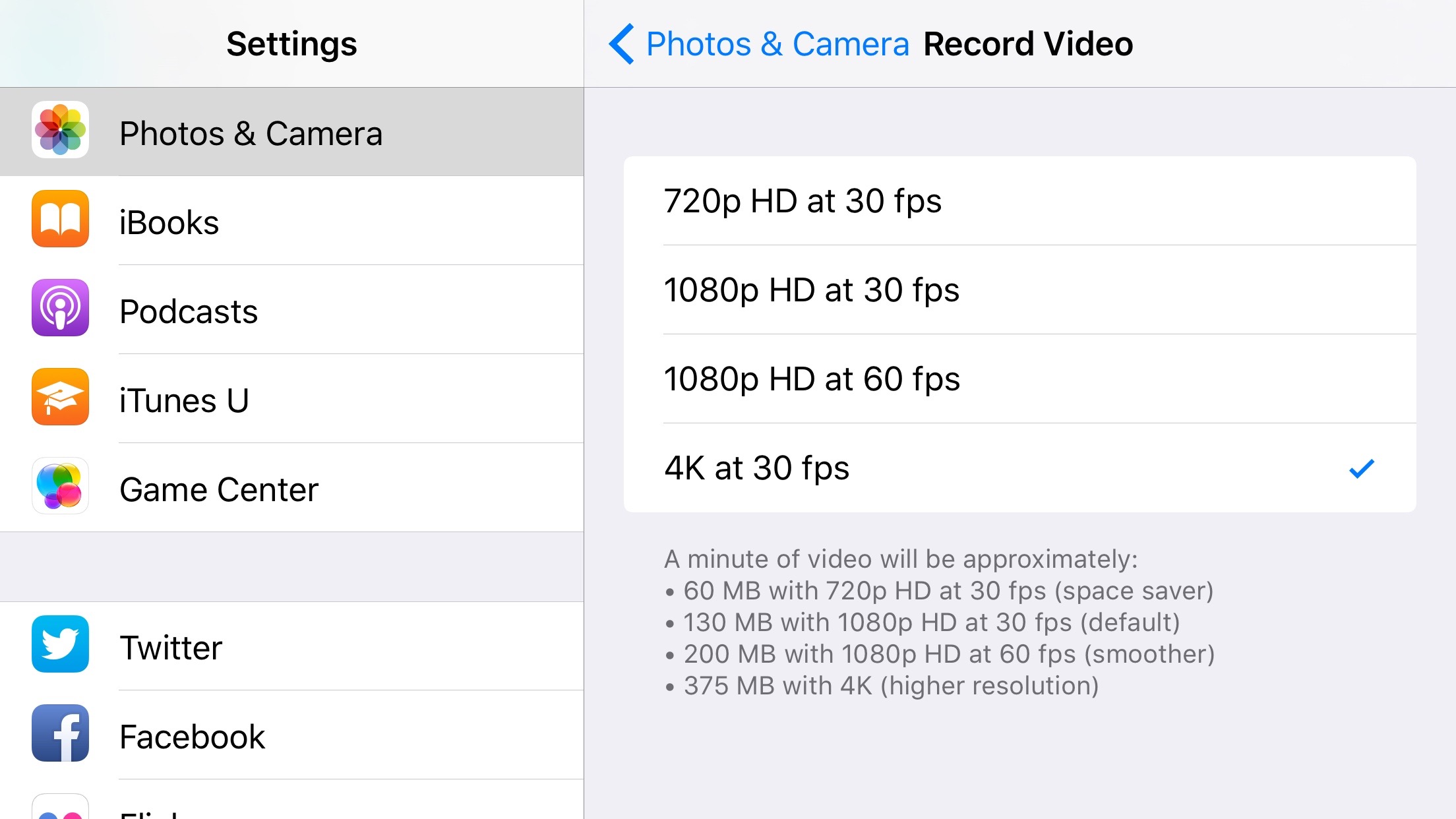 The video captured during a Live Photo is both low-resolution and low in frame rate (12fps), so the footage plays back with a murky but somewhat dreamy look. It’s noticeable on 4.7-inch and 5.5-inch screens, and it’s just not pretty on even larger displays like iPads and Macs. The 12MP still photo dramatically contrasts with the dated, stuttering video footage wrapped around it. It’s like pairing an iPhone 6s photo with an iPhone 3GS video. I would love to see the 12fps frame rate increase, or at least provide an option if storage is the issue.

Live Photos can be used as lock screen wallpapers on the new iPhones, but the motion is so stuttery that it isn’t as compelling as I’d hoped after Apple’s presentation. You also need to deep press the lock screen for it to animate, likely to keep battery life in control, but would anyone regularly do that? For now I’m using a Live Photo as my wallpaper, but only because I like the way the still photo looks.

Once you grasp what a Live Photo is for yourself, the first time you share one with someone else necessarily requires teaching them how to engage it. My experience with both power-user friends and less-savvy family members when sharing a Live Photo to other iPhone users is this: 1) send Live Photo 2) include instructions to open image full-screen, press and hold 3) just hope that makes sense. And that’s just from iPhone to iPhone. (There is a Live Photos icon in the photo’s corner, but it’s not a play button.) 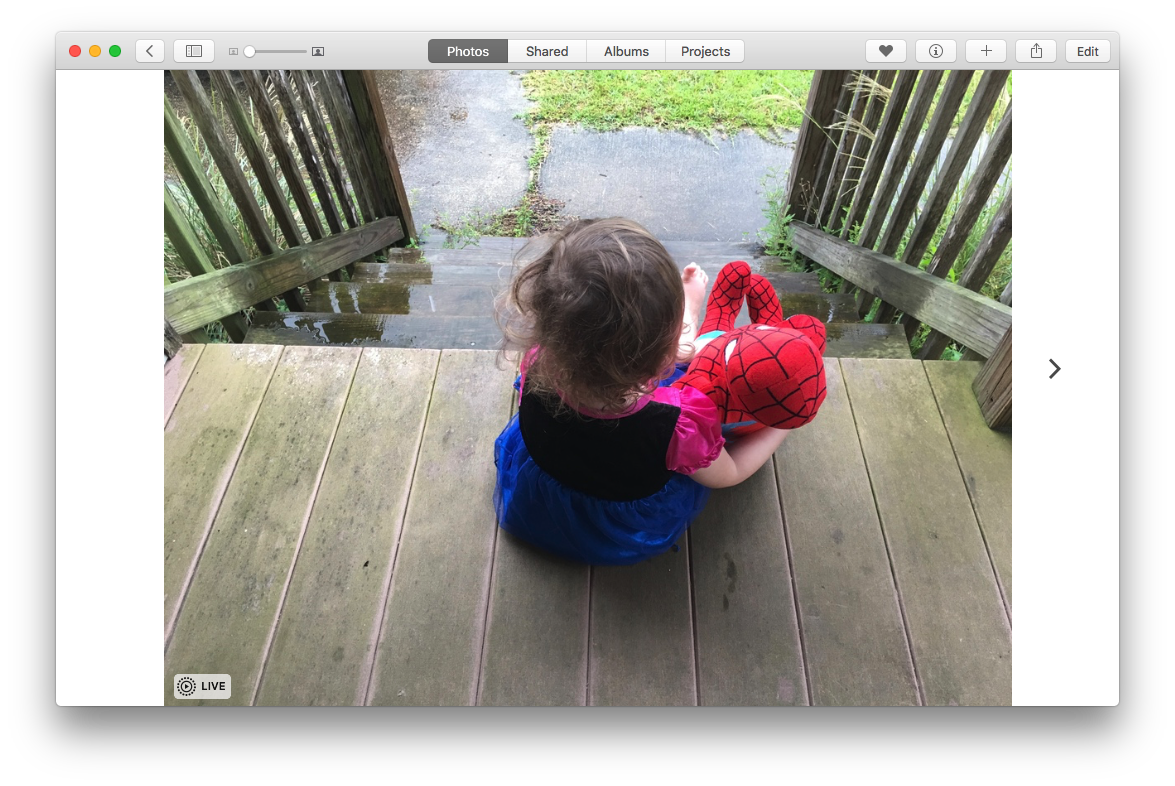 There’s a software component to making Live Photos work, too, and not even Apple has caught all of its platforms up. This is what you can expect when sharing Live Photos across Apple’s apps and platforms. iCloud Photo Library can sync Live Photos to the Mac, and Photos allows you to play them back within the app. A button labeled LIVE in the lower right hand corner lets you click and play the Live Photo. 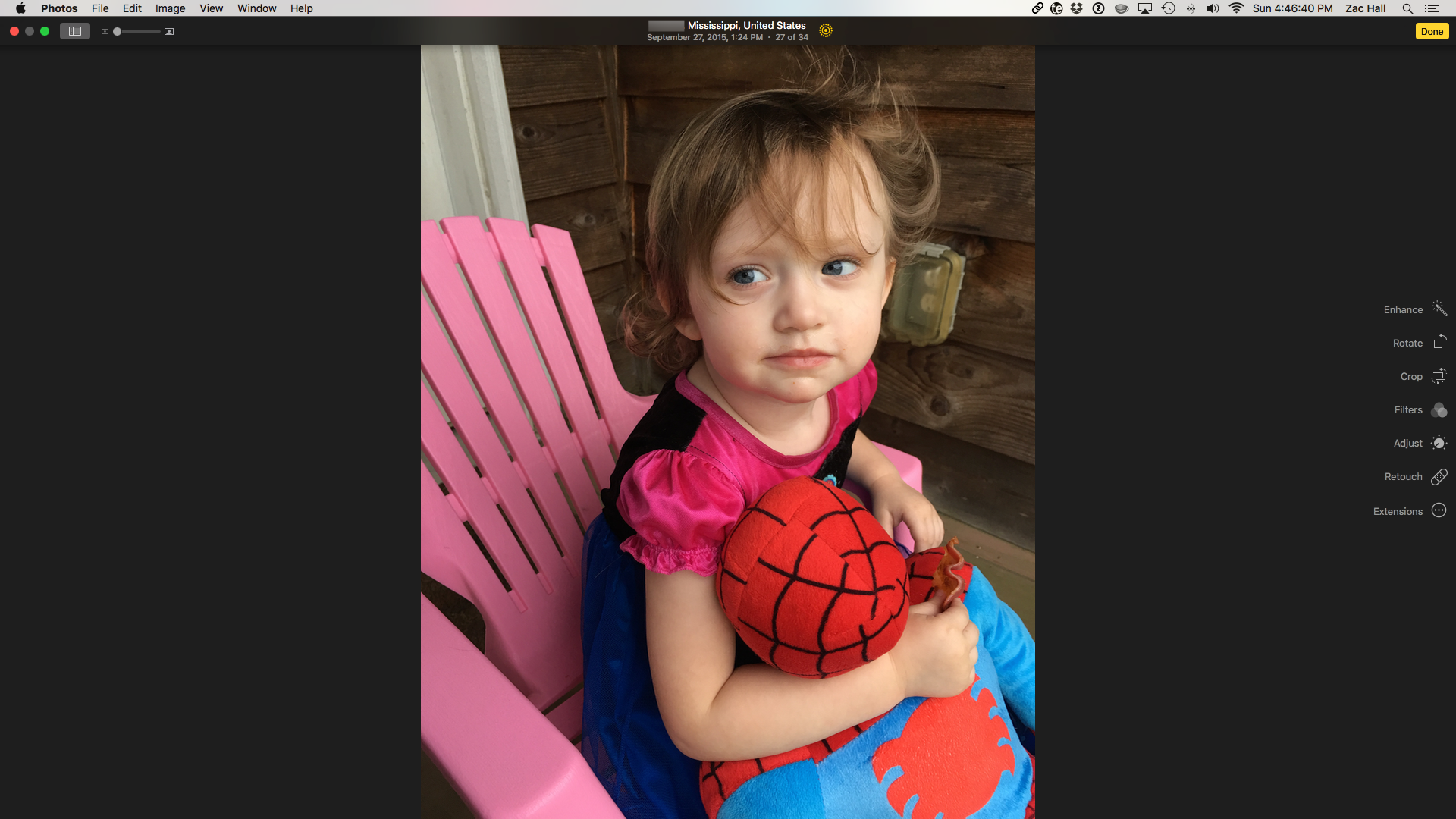 Just like on the iPhone, Photos for Mac lets you edit a Live Photo and enable or disable the live part of it. Click edit then toggle the yellow or white Live Photos icon in the top center: yellow is on and white is off. Similarly to iOS, auto-enhancing a Live Photo preserves the motion and sound, but rotating, cropping, applying filters, or adjusting light and color will revert it to a non-Live Photo. 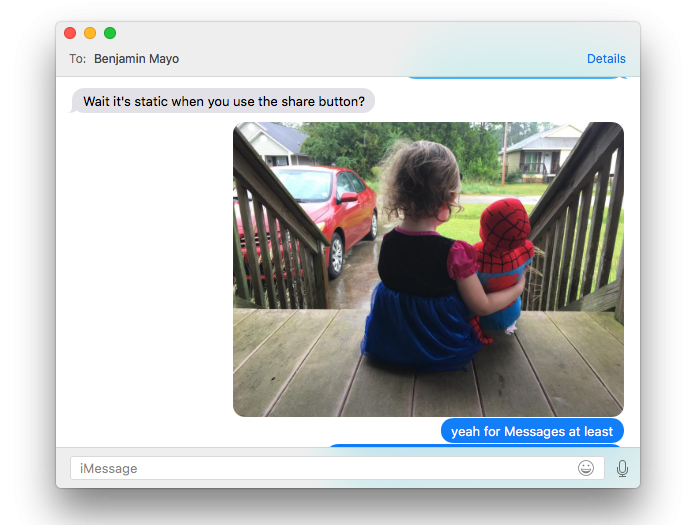 Somewhat frustratingly, Messages for Mac currently has zero support for Live Photos. Messages on iPhone and iPad work with Live Photos just fine, but the Mac version of the app treats every Live Photo as a traditional JPEG still image. There’s not even an icon to let you know you should view the Live Photo on your iPhone or iPad. This also happens when sharing a Live Photo directly from Photos for Mac through Messages using the share action. This is the case on both the public version of OS X El Capitan 10.11.0 and the developer beta version of OS X 10.11.1. 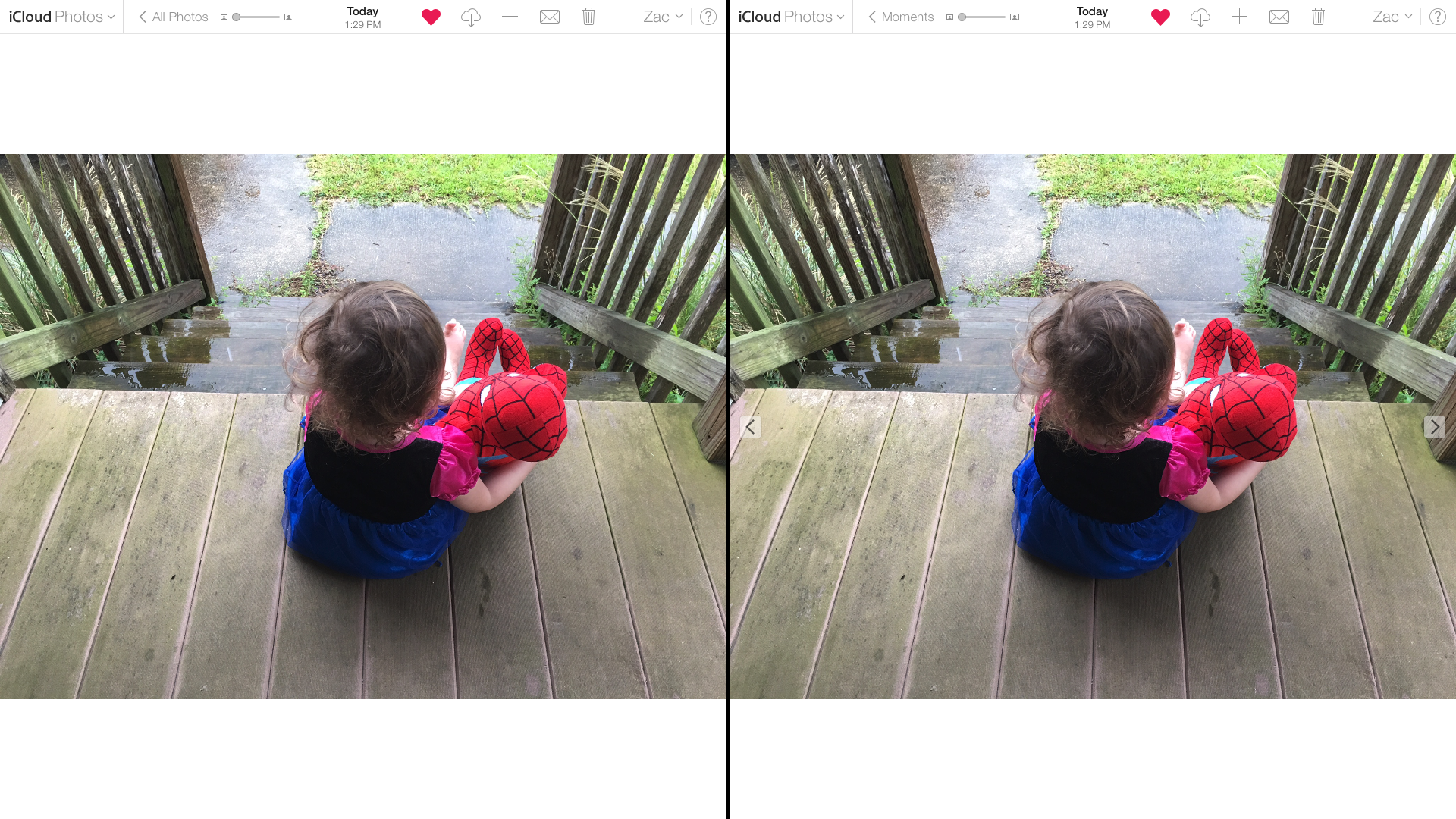 More reasonable is Apple’s lack of support for Live Photos on the web. This is the case when using iCloud Photo Library on both icloud.com and beta.icloud.com, which sometimes has future features before the main site. You can playback video from both versions of icloud.com, so I wouldn’t be surprised if it eventually caught up with Live Photo support. For now I don’t spend much time viewing my photo library online, though, so the omission is less annoying than no Live Photos on Messages for Mac. 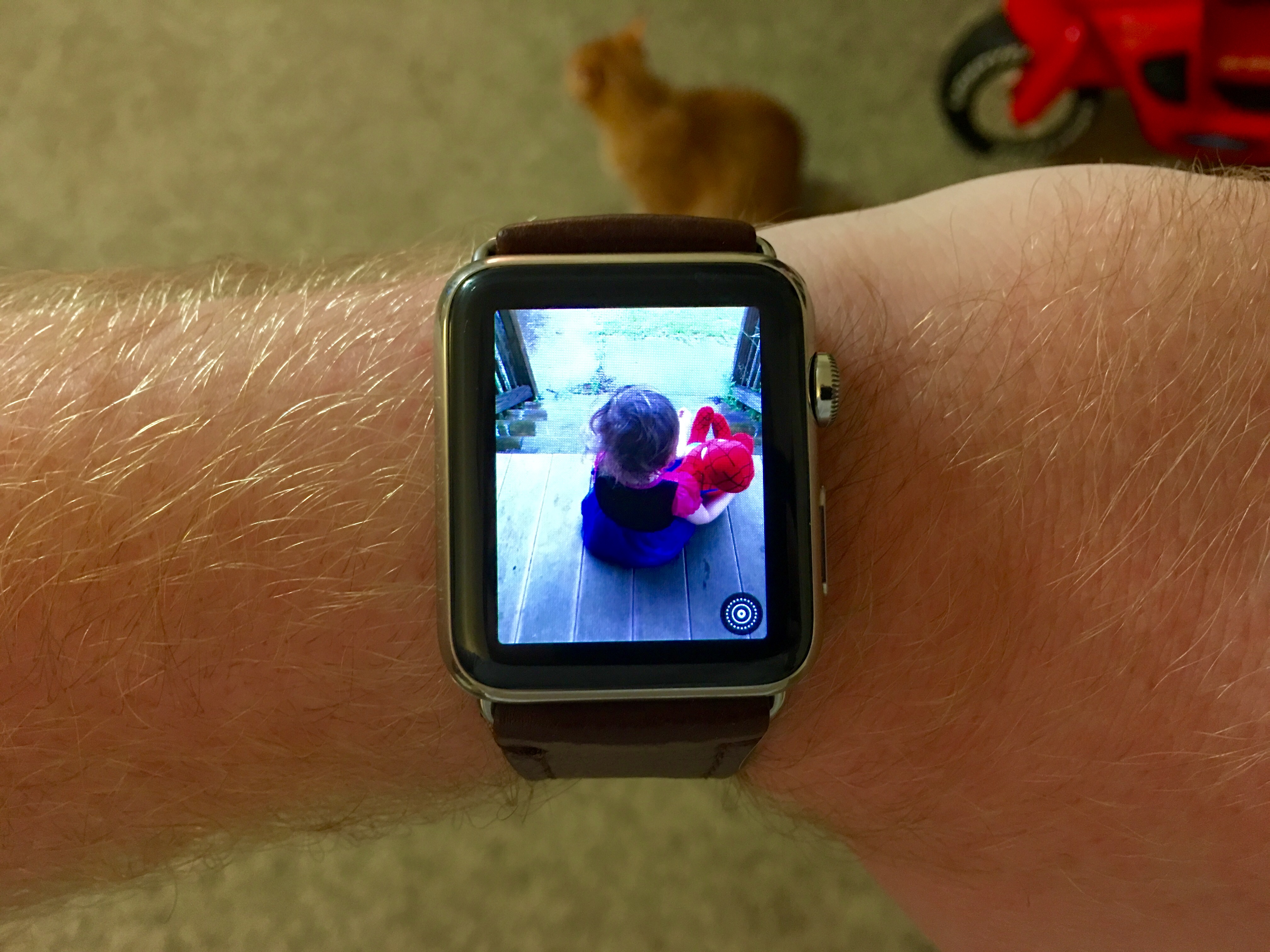 And what about Apple Watch? Testing with watchOS 2, Live Photos work as expected when you sync an album that includes them. In my case, I sync photos that I favorite to Apple Watch. This lets you set these photos as your watch face, and Live Photos will animate your watch face each time the display lights up. Viewing a Live Photo in the Photos app presents an icon in the lower left corner that shows motion but not audio when tapped. Live Photos in Messages on Apple Watch work like Messages on the Mac, just still JPEGs with nothing to clue you in to watch it.

Sharing a Live Photo online is also tricky. My videos are captured using QuickTime on the Mac with a wired connection to my iPhone, and the result is really just a video that you play and pause. Apple said that Facebook plans to support Live Photos sometime this year, but it’s not clear what that will look like. Still, with Apple behind it there should be a fair amount of support coming.

Live Photos aren’t as straightforward as traditional photos and videos, but are they worth the trouble right now? All of these software pieces will come together in time, but the wow effect of what a Live Photo can offer is not something I expect to get over anytime soon. As I mentioned at the top and discussed on our podcast ‘Happy Hour’ this week, my feelings about Live Photos have quickly changed since first trying the new camera feature last Friday.

The iPhone’s Camera app lets you decide before shooting whether or not you want Live Photos to be on or off. You can quickly toggle it on or off before each shot if you want. After my first couple of days with Live Photos on my iPhone 6s Plus, that’s exactly what I was doing: shoot a photo of a person with Live Photos on, snap a pic of an interesting looking coffee cup with Live Photos off.

That’s a lot of work, though, and the extra step of processing that decision isn’t worth missing a good shot. Adjusting my approach (and taking advantage of my 128GB of storage plus iCloud Photo Library with optimized storage turned on), every photo I shoot now starts as a Live Photo then I decide in post if I should revert it to a still image afterwards.

I have one exception to this approach. Live Photos capture 3 seconds of motion and audio, including 1.5 seconds after you snap the image. That means taking a Live Photo is noticeably not instant because it can’t be. It’s similar to taking an HDR photo on an old iPhone before the processor got so fast. That process involves taking and mixing multiple images and shooting without moving. Live Photos are the same. They take an extra second and a half, so I toggle the feature off if I want to shoot something very quickly in succession.

I joked on Twitter that every iPhone reviewer should have a toddler around when testing Live Photos because that’s when the feature really shines. Parents need Live Photos. It seemed gimmicky when I tried shooting the flag waving in my front yard and getting my cat to pose for one was more annoying than pleasant, but nearly every Live Photo of my daughter just impresses me over and over.

iPhones are getting really great at shooting video. My iPhone 6s Plus has optical image stabilization even for video and shoots in 4K resolution, and while I sometimes decide to shoot a video and not a photo, it’s still a fraction of the time.

Photos are fast to share, easy to enjoy, and don’t ask for much of your time. Videos catch the moment much better but rarely get re-watched around my house. I’m finding that Live Photos strike a really nice balance between the two formats. I have way more photos than videos of family and friends, but I wish I’d have shot more videos over the years. Live Photos makes that decision much easier for me going forward. I don’t have to change my approach, but I get the benefit of details previously only captured in video.

Live Photos seemed ambiguous when first announced and ranked low on my list of reasons for upgrading from my iPhone 6. Yes, the motion quality has plenty of room to improve and Apple’s software still needs to catch up in some corners, but consider me completely sold. Android phones and App Store apps may have been first to the photo format, but being built into the camera and apps that I use everyday in a way that isn’t intrusive is perfect.