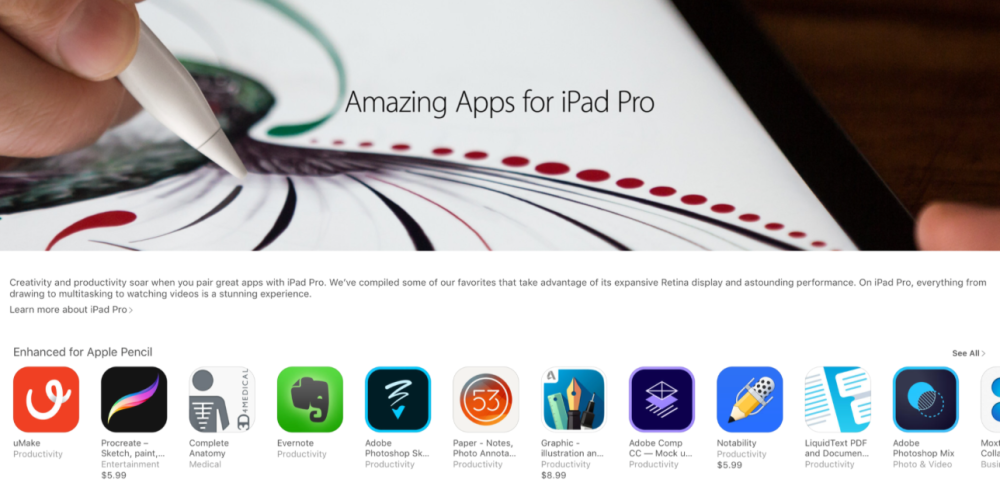 Following the official release of the iPad Pro yesterday, Apple this evening has launched a pair of new featured sections on the App Store showcasing apps that take advantage of the massive 12.9-inch Retina display the iPad Pro has.

The first featured section showcases games that are optimized for iPad Pro. Apple touts that the size and power of the device takes gaming to a whole new level. Apps featured in this section include Shadowmatic, Geometry Wars, Broken Age, Smash Hit, Lumino City, Horizon Chase, and many more. Apple says the following about gaming on the iPad Pro:

The size and power of iPad Pro let you enjoy gaming on an epic new scale. Get started with games whose breathtaking graphics, spectacular sound, and immersive features create incredible experiences.

The second featured section showcases non-games that are optimized for the iPad Pro. A subsection of this featured tab shows apps that are enhanced for Apple Pencil, including uMake, Evernote, Paper by 53, Notability, and more. Apple then showcases what it claims are “desktop-class apps,” including its own suite of productivity apps Numbers, Pages, and Keynote, as well as Microsoft’s Word, Excel, and PowerPoint. Other apps include AutoCad 360, Pixelmatr, and OmniFocus 2. Apple says the following about productivity on the iPad Pro:

Creativity and productivity soar when you pair great apps with iPad Pro. We’ve compiled some of our favorites that take advantage of the its expansive Retina display and astounding performance. On iPad Pro, everything from drawing to multitasking to watching videos is a stunning experience.

Interestingly, both of these sections contain apps that haven’t specifically been updated for the iPad Pro, but rather still look good on the device according to Apple.

The iPad Pro launched yesterday online and in Apple retail stores. Reviews of the device were somewhat mixed, with reviewers claiming it’s not necessarily the laptop-replacement Apple hyped it up to be thanks to limitations of iOS. You can read and watch our unboxing of and hands-on with the iPad Pro here, and check out Ben’s iPad Pro diary here.