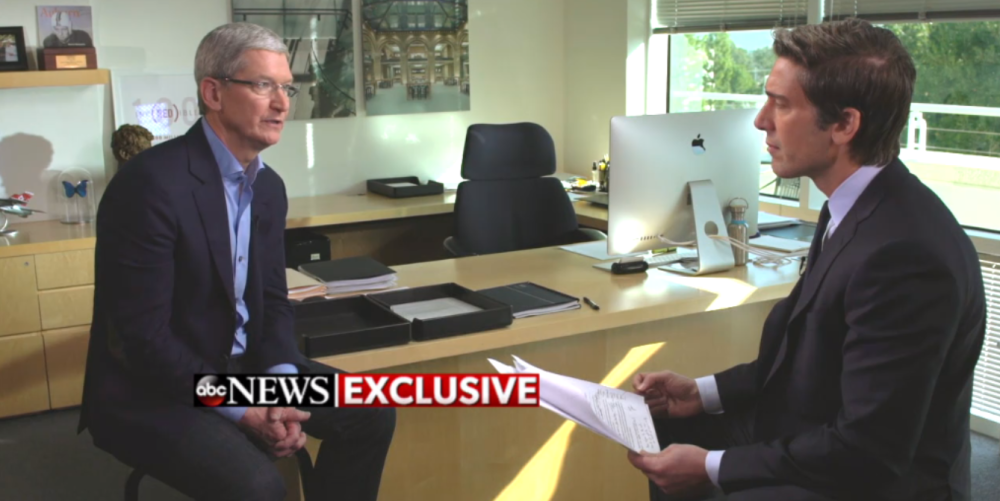 Apple CEO Tim Cook has today sat down with ABC’s David Muir to talk about the company’s battle with the FBI. Last week, a California court requested that Apple unlock an iPhone 5c used by one of the San Bernardino gunmen in December. Cook replied to the request with a letter on Apple’s homepage, saying that Apple did not want to create the tool that would be required to unlock the device. In his interview with Muir, Cook elaborated on the company’s decision…

Cook was first asked about Apple’s communication with the Obama Administration regarding the Justice Department’s request. He noted that, relating to this specific case, there was almost no communication between the government and Apple. “We actually found out about the filing from the press,” Cook said. “And I don’t think that something so important to this country should be handled that way.”

Muir then pressed Cook to dive deeper into the company’s reasoning for siding with protecting user security versus potentially protecting national security. Muir pointed out that many people see the San Bernardino attacks as a terrorist attack on U.S. soil, making it hard for them to side with Apple on the issue. Cook explained, however, that he believes it would “be bad for America” to set a precedent where user data is compromised to potentially expose something that “might be there.”

I think safety of the public is incredibly important. Safety of our kids, safety of our families is very important. The protection of people’s data is incredibly important and so the tradeoff here is that we know that doing this could expose people to incredible vulnerabilities. This is not something that we would create. This would be bad for America and it would also set a precedent that I believe many people in America would be offended by. And so when you think about those which are knowns, compared to something that might be there, I believe we are making the right choice.

To further get across Apple’s view on just how dangerous writing a tool to access the data on the device could be, Cook explained that it would be the “software equivalent of cancer.”

“The only way we know would be to write a piece of software that we view as sort of the software equivalent of cancer. We think it’s bad news to write. We would never write it. We have never written it.”

Cook also noted that had county officials not reset the gunman’s Apple ID password, Apple might have been able to help. “I wish they would have contacted us earlier so that wouldn’t have been the case, it was a crucial misstep.”

The full interview can be seen below (Full YouTube upload coming soon).