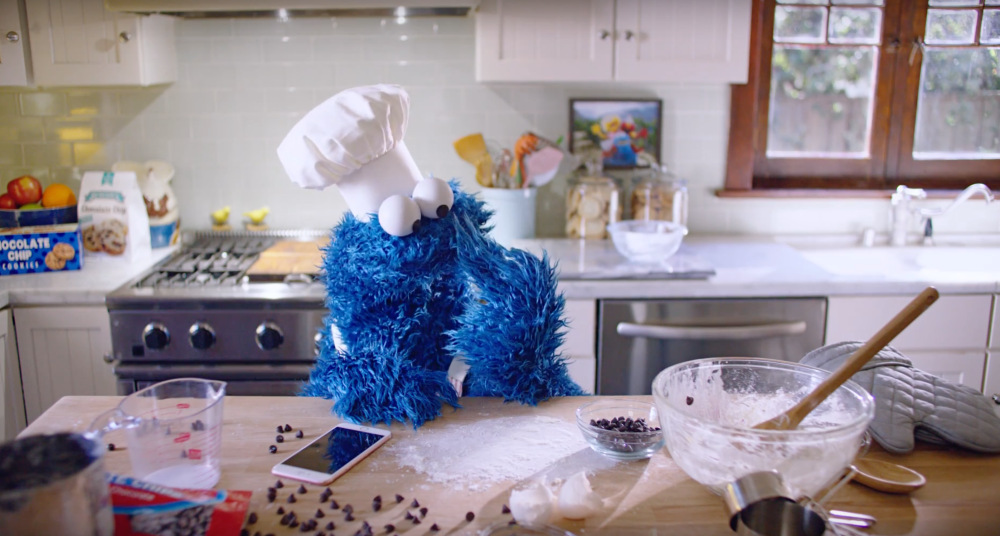 Apple has launched yet another iPhone 6s advert, this time featuring a special celebrity guest: the Cookie Monster. In the ad, named Timer, the blue monster uses hands-free Siri on his iPhone 6s to time (you guessed it) the baking of his cookies.

Although hands-free Siri exists on all iPhones, the ability to say ‘Hey Siri’ out loud without having the phone being plugged in to power is exclusive to Apple’s latest handsets: the iPhone 6s and iPhone 6s Plus. Watch the minute-long commercial after the break …

Apple’s last round of adverts focused on 3D Touch and Live Photos. It did run a commercial late last year on hands-free Siri however, swapping the cuteness of a Cookie Monster for a more serious tone highlighting renowned film director Jon Favreau.

In the new ad, Siri is seen to perfectly understand the Cookie’s monster unusual accent, playing music playlists, setting timers and more. A large portion of the ad is dedicated to watching the Cookie Monster mess around with kitchen utensils whilst waiting for the cookies to be ready.

Seeing as Siri often struggles understanding many foreign accents, it’s a bit hard to believe the Cookie Monster would achieve perfect hit rate … Nevertheless, it’s a fun, light-hearted, commercial that cleverly makes use of a familiar face without falling back to the usual handful of celebrities.

Check the final seconds of the advert for a clever reference to Sesame Street: ‘The number of the day is 6 and the letter is S’.