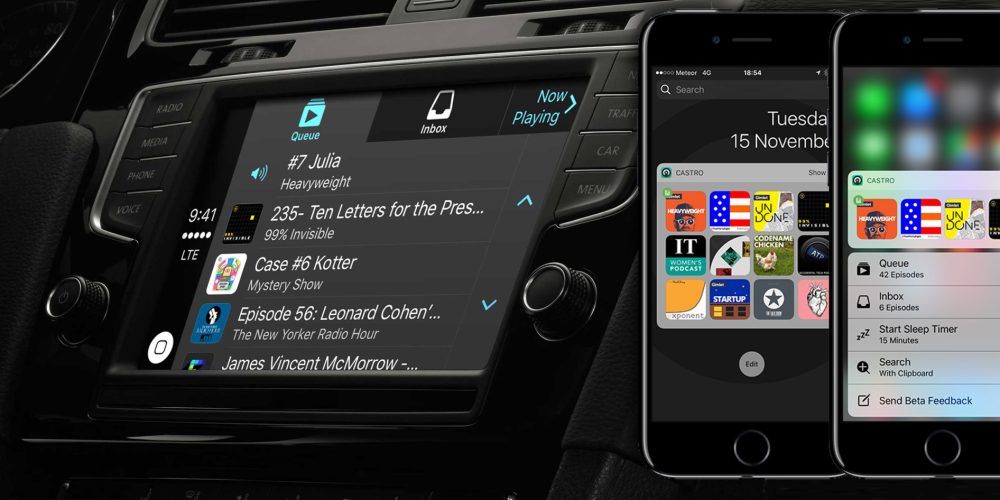 Castro, an inbox-based podcast player for iPhone, today released a major update (version 2.2) with a handful of new features. Along with a 20% price cut, the update headlines the addition of CarPlay, a new widget for the iOS 10 lock screen, 3D Touch Quick Actions, and more.

Get Castro for $3.99 in the App Store, but note it is only available for iPhone — there is no iPad or Mac counterpart. Here’s a look at what’s new in the latest update …

The standout new feature for version 2.2 is the addition of CarPlay integration. CarPlay is the Apple technology that adds a custom iOS experience to the dashboard of supported cars.

CarPlay is available on a wide range of 2016 (and newer) vehicles with over a 100 models. You can also add CarPlay using an aftermarket entertainment system like this one from Pioneer.

The Castro integration with CarPlay displays the Queue and Inbox as a tabbed list; in Castro, the Inbox comprises all the new episodes released by a podcast subscription whereas the Queue is the playlist of episodes you have chosen to listen to. This paradigm is great for CarPlay as you don’t want to be fiddling in menus whilst driving: it flattens navigational hierarchies into a simple decision tree of ‘what is new’ and ‘what you’ve picked to listen to’.

Castro 2.2 also adds a brand new widget which displays a grid of artwork representing the next handful of queued episodes. It’s just one tap to start playing a particular show. The widget allows users to quickly start playing episodes from the iOS 10 Lock Screen or Home Screen (swipe to the left) as well as add additional context when firmly pressing the app icon.

A mini version of the widget will appear alongside the new 3D Touch Quick Actions, activated by a 3D Touch on the Castro app icon. The Quick Actions include shortcuts to the Queue and Inbox (with subtitles listing how many episodes remaining) as well as a setting for a Sleep Timer. You can also make a search for a new podcast using the clipboard contents.

Castro is not the most popular podcast client for iOS but it is worth considering for its clean UI (replete with playful animations), unique Queue and Inbox mechanisms and its one-time-purchase business model. It’s also now cheaper than ever to give it a go. Its biggest drawback is the lack of an iPad, Mac app or even a basic web client to allow users to listen to shows across all of their devices.

Castro is available for $3.99 in the App Store. Find out more details on the developer’s website.