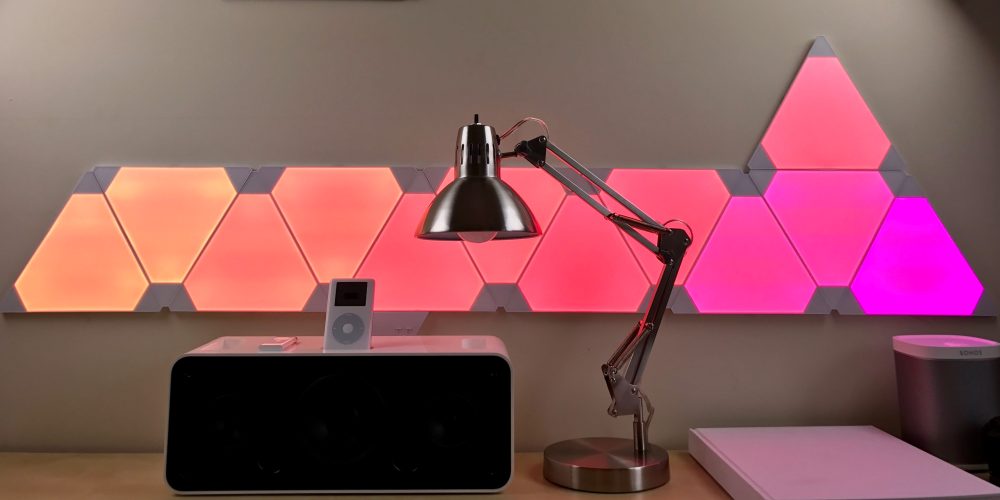 Nanoleaf’s Aurora smart lighting system retails for $199 for a starter kit that includes nine panels, nine linkers, the HomeKit-compatible controller, 28 3M mounting strips, and the power supply. That’s comparable in price to the Philips Hue smart lighting system which includes three color-changing A19 LED bulbs and a HomeKit-compatible bridge, but the novelty of Aurora is unmatched by any other HomeKit lighting solution on the market.

Aurora is modular so you can create a variety of designs from the same nine tiles, or add additional tiles to create more complex layouts. Each lighting panel can connect to up to three more lighting panels with one linker connecting two tiles. Aurora intelligently detects what layout you’ve created, then maps it on Nanoleaf’s companion app where you can set color flows, brightness, speed, and more.

Additional tiles are sold in sets of three for $59.99 which is about the cost of one additional Philips Hue color bulb. 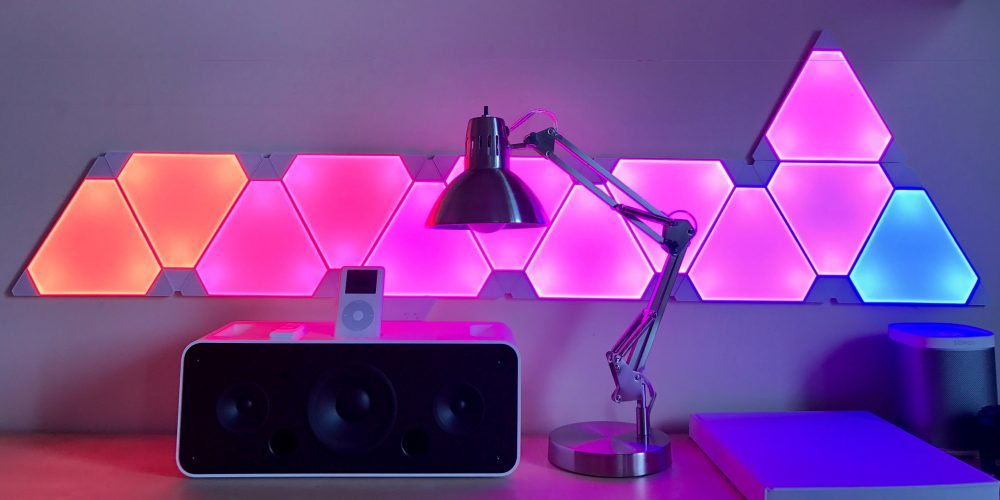 Check out our hands-on video with Nanoleaf Aurora below:

HomeKit support means you can also set colors and brightness with Siri, Apple’s new Home app, or through automation based on time or commands that control other accessories.

For example, you could have a scene called Movie Night that turns off the ceiling light and sets the Aurora lights to deep blue at 10% brightness; just tell Siri to ‘set Movie Night scene’ and your connected accessories automatically jump to the right mode. 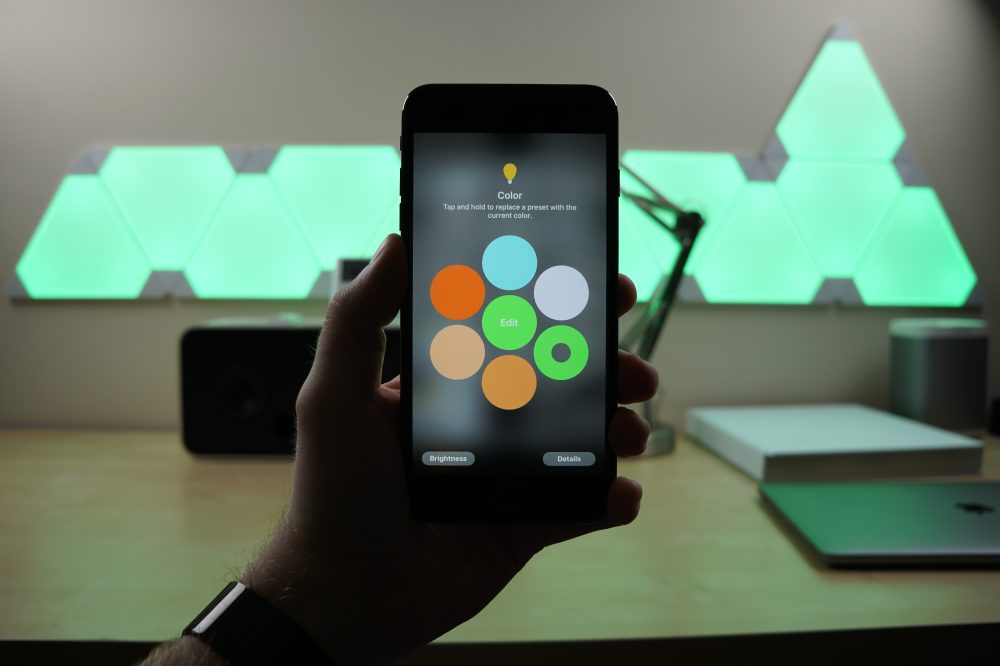 You can also turn color effects you discover or create in Nanoleaf’s app into scenes in Apple’s Home app. This is where HomeKit support’s potential is really unlocked. You can use Siri to change between dramatically different color effects, or pick a few favorites to access from Control Center. 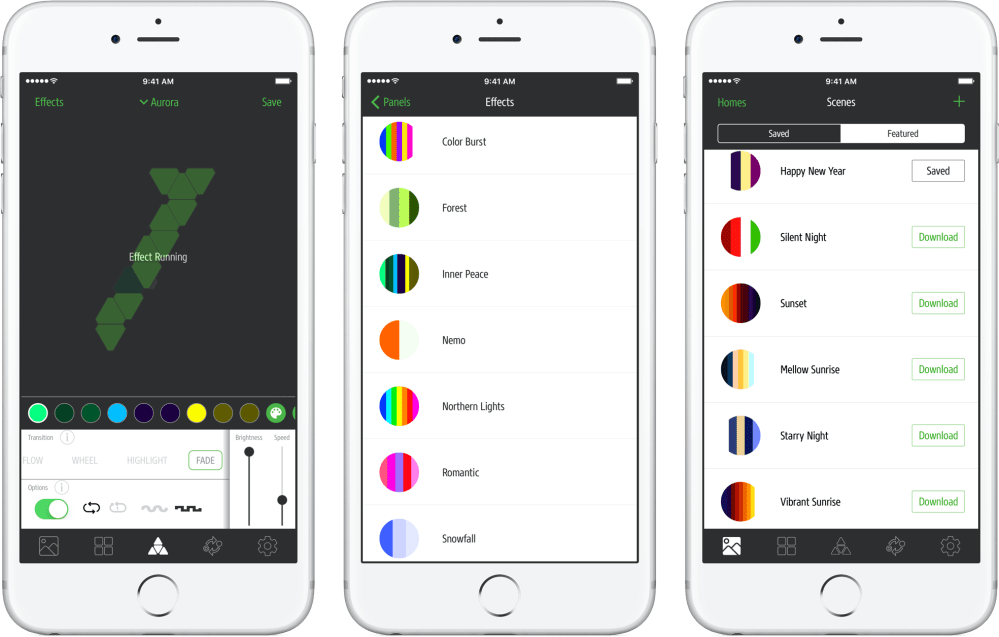 You can also automate specific color effects using Apple’s Home app. For instance, you can have Aurora display a vibrant sunrise color effect at 7 am each morning or even based on the actual sunrise time where you live. 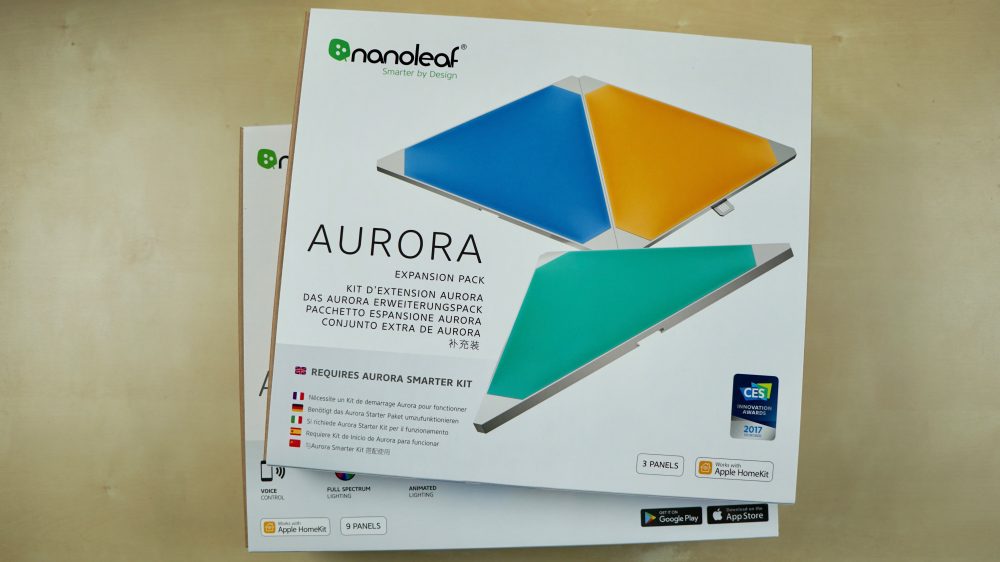 Setting up Aurora can be a bit intimidating, but Nanoleaf provides the necessary  supplies including paper templates that let you mock up a design on your wall before sticking tiles. Nanoleaf also has a series of very helpful video tutorials that I found useful before installation.

Nanoleaf’s packaging is pretty minimal and easy to break down and recycle (the box even asks you to) which I appreciated. The power supply includes plenty of cable length for wiring the controller to where you need it, and each tile is pretty light and can stand a few accidental drops (trust me).

Nanoleaf recommends connecting each panel right out of the box before you starting hanging anything to make sure there are no defects. The first panel connects to the controller, then each additional panel connects with a small tab called a linker that inserts into both panels to pass power and data. 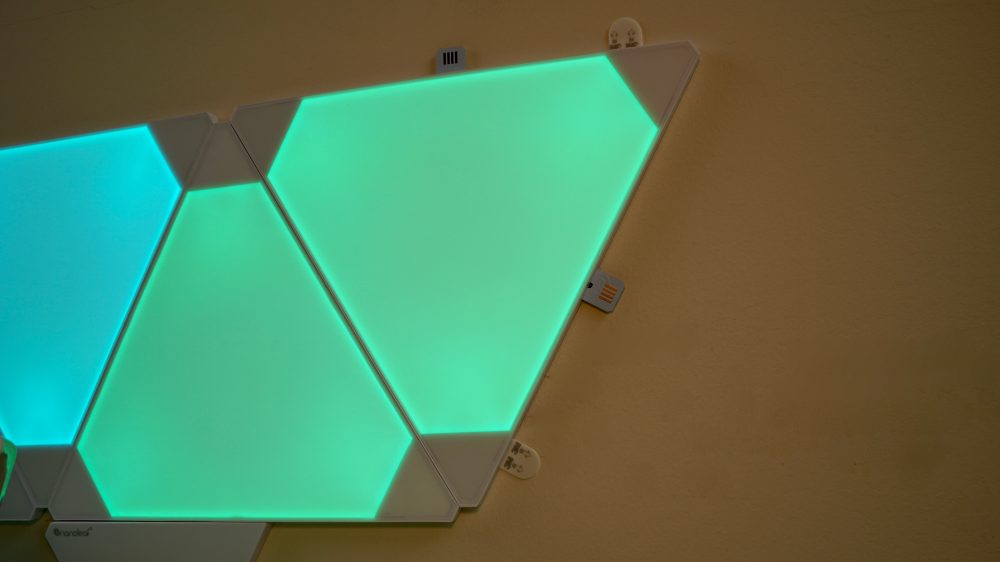 3M mounting strips hold each panel in place on the wall. Nanoleaf recommends exposing the non-adhesive tab on each mounting strip so panels can be easily removed in the future, and you can strategically place them so that the connecting tile covers the exposed tab. The process is super easy once you get the hang of it. 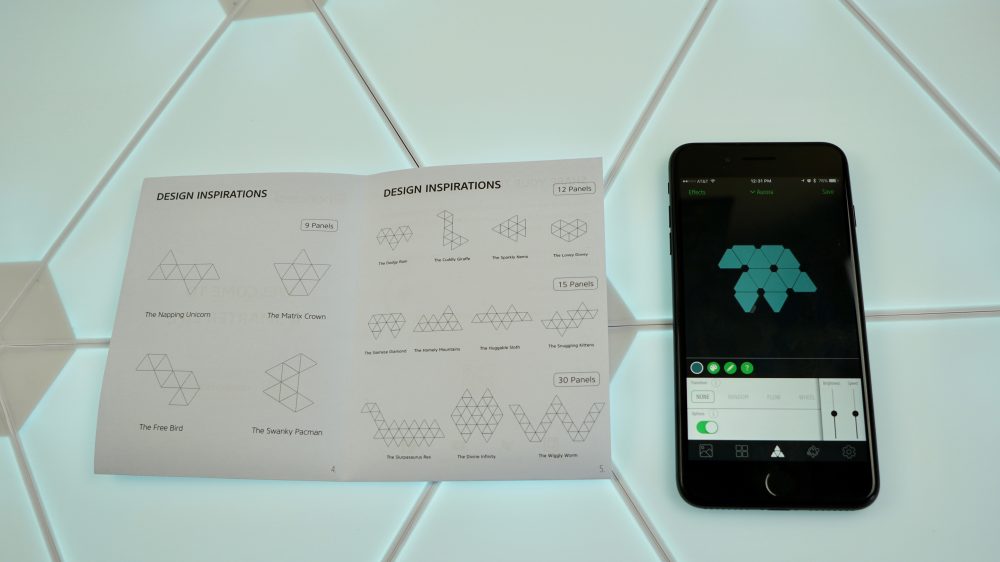 Deciding on a design pattern may be the hardest step. Nanoleaf provides several ideas in the setup guide including four patterns that work with the starter kit, four more designs that work when adding the expansion kit, and seven ideas when using 15 and 30 panels. You can make any pattern with your panels, though, and the Nanoleaf app recognizes it and reflects it on your smartphone or tablet. I was tempted to go with the fish layout, but ultimately decided on a more linear layout to cover a few scratches on the wall from guitars. 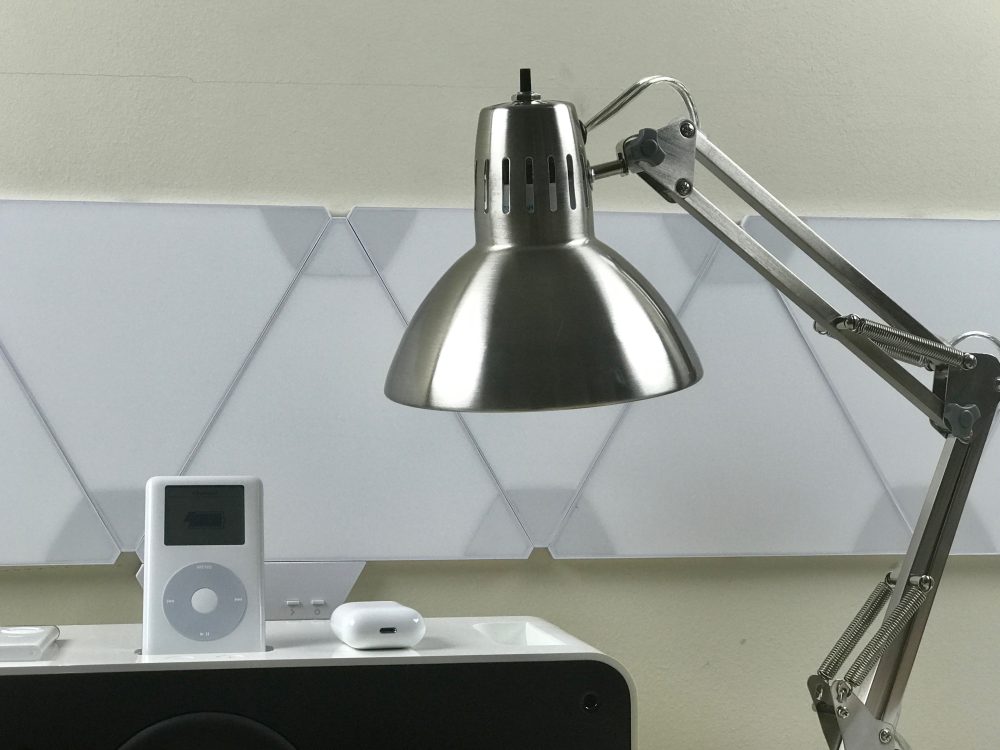 A few things to keep in mind: each panel is lit by three LEDs which are more noticeable at high brightness levels, the controller is wired and may not sit flush like each tile so try to place it out of sight, and consider how the plasticky white panels will appear when not lit before deciding on placement. 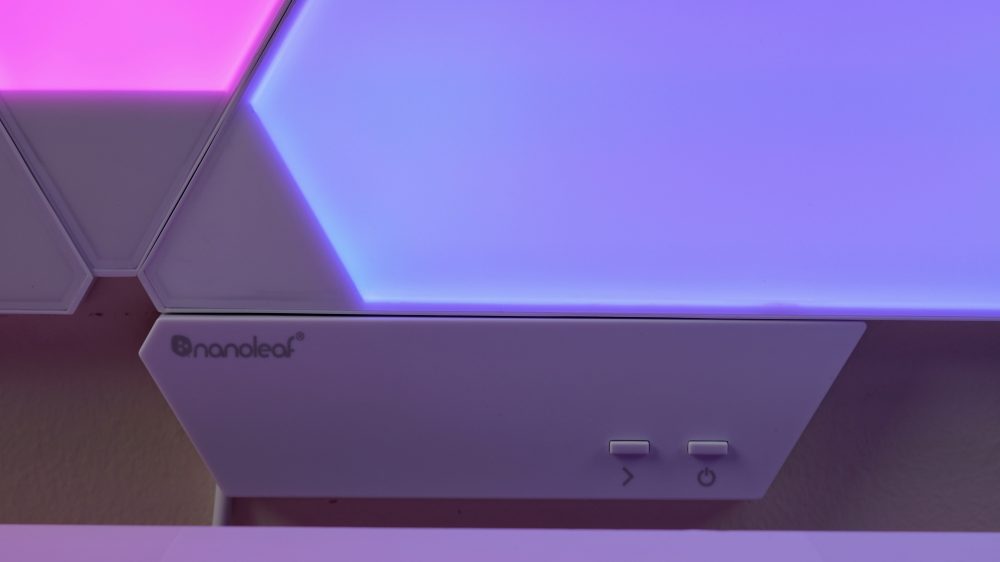 Aurora is visually impressive and well integrated with Apple devices and Siri thanks to HomeKit, and Nanoleaf makes the lighting system both easy and fun to set up with the modular design. The starter kit is pricey for mood lighting at $200, but overall the product is very well done. I can definitely imagine purchasing additional starter kits to create different designs in other rooms in the future. 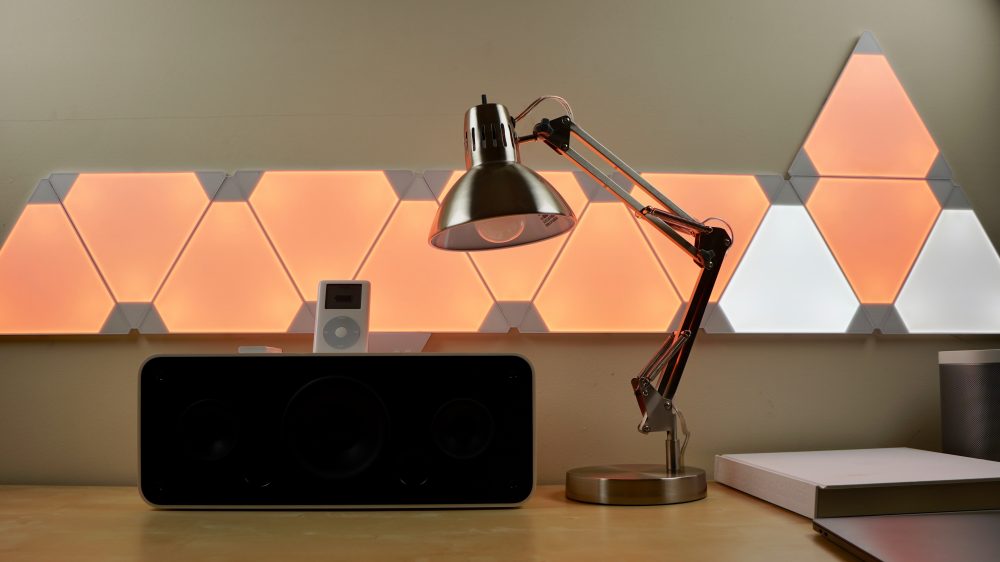 Nanoleaf Aurora is like a beautiful screensaver for your wall. Pair that with some music you enjoy and you can create a very ambient lounge experience.