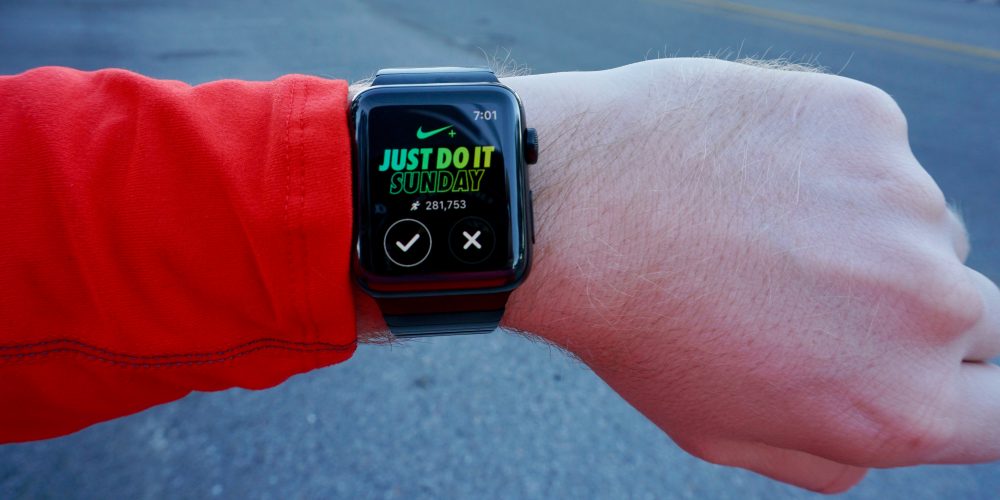 Last New Year’s Day I decided to start eating healthy, exercising daily, and filling the Activity Rings on my Apple Watch as a way to get in shape. I broke my New Year’s resolution by January 4, but I started again on April 1 and ultimately lost over 50 pounds in 2016.

Apple Watch didn’t lose the weight for me — it took a lot of dedication and really changing my lifestyle — but the fitness tracking features and Apple’s Activity app helped quantify my effort without me doing too little or going overboard.

Apple Watch has absolutely been an effective motivational coach that has pushed me toward my goal of being more active. Below I’ll detail my experience and share some of what I’ve learned along my journey.

Apple Watch Activity Rings show you Move, Exercise, and Stand. Move is how many active calories you’ve burned based on heart rate data, Exercise is how many minutes your heart rate has been elevated from an activity as simple as a brisk walk, and Stand is how many times you’ve stood up and moved around for at least one minute of any hour.

Move, Exercise, and Stand are represented by three rings that close when you complete a goal. Move is a customizable goal that you can change at any time, Exercise is a fixed 30-minute goal but you don’t have to workout all at once, and Stand takes 12 different hours to complete.

Activity Rings as visual indicators of my progress throughout each day have been super effective for me. I’ve tried other fitness trackers before but nothing has proved as friendly and motivational as Apple Watch. 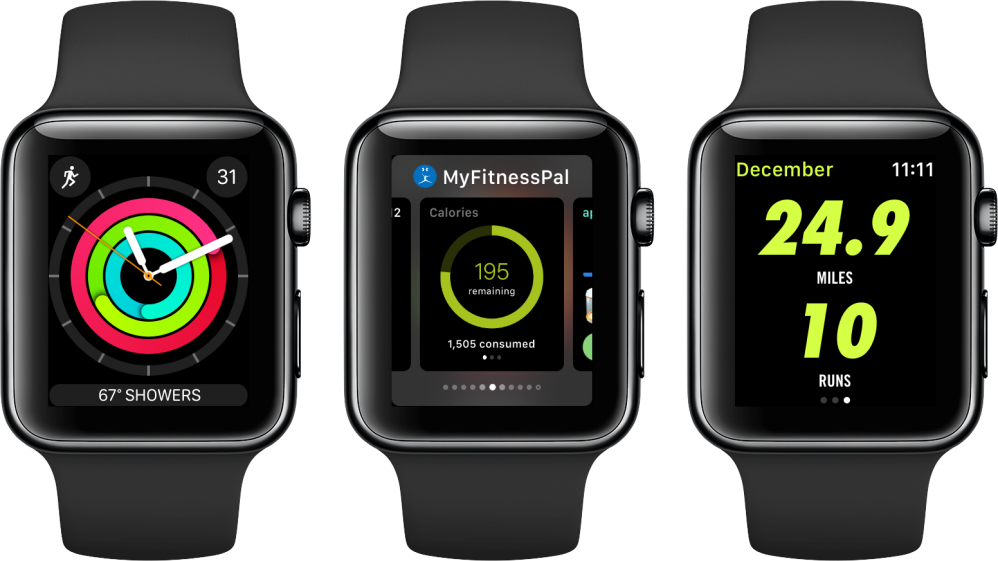 Part of what makes Apple Watch work for me is that it has appeal outside of activity tracking features: it’s a nice watch, it has Siri and Apple Pay, and it’s closely integrated with the iPhone. I wore mine for about a year before actually taking its fitness tracking features seriously.

Achieving my weight loss goal still didn’t happen overnight. Losing the first ten pounds was the easiest then it got tougher, but creating a workout routine with Apple Watch dramatically helped.

My advice for setting your personal Move goal is this: complete 30 minutes of exercise that you can consistently repeat daily then look at your Move number near the end of the day and make that your daily goal. Your Move goal could be lower or higher based on what workout you consistently complete, but the key is finding something that pushes you to move more without being too difficult to make part of your routine.

Starting small is okay too. I gradually increased my Move goal up to 800 each day before hitting my goal of losing 50 pounds and reducing it back to 500, and there’s no way I could have started at 800 without being discouraged.

Losing the weight took a combination of both diet and exercise, of course, and food tracking with Apple’s HealthKit feature really helped. I use MyFitnessPal to log my meals.

HealthKit support means data that you input in MyFitnessPal can be shared with Apple’s Health app, too, which can become a wealth of information as you collect more data.

Dieting has been much tougher than exercise for me, but I don’t think I would be motivated to do one without doing the other. Because I was logging workouts with Apple Watch and completing my Activity Rings, I felt motivated to improve my diet as well. 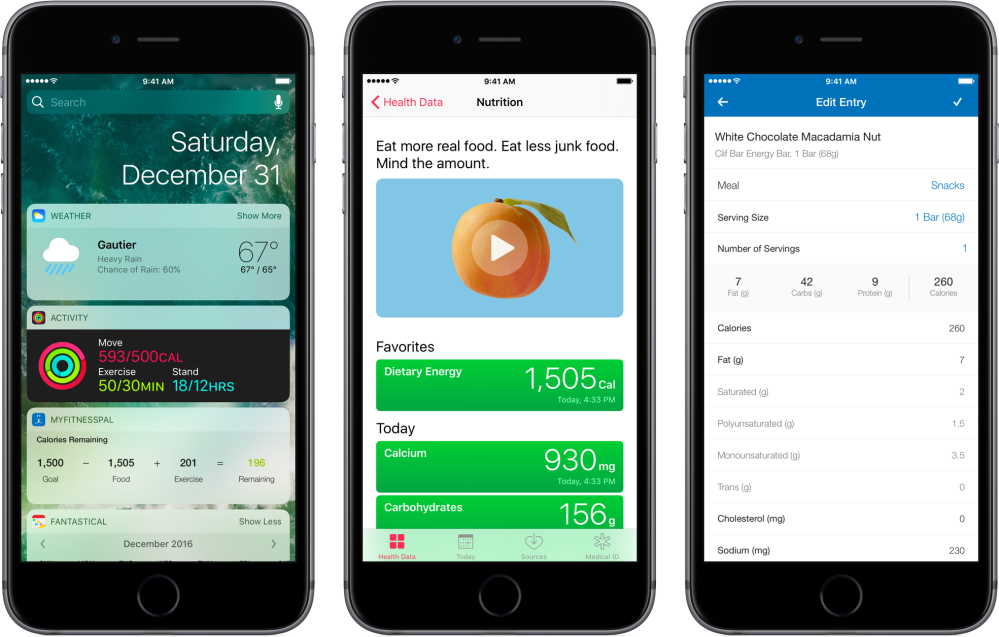 I’ve been a junk food eater for 25 years (and growing up on Southern cuisine hasn’t helped), but in April I gave up soda and sweet tea for water and unsweet tea and started drinking my morning coffee black. I also traded snacking throughout the day and oversized fast food meals at the end of the day for consistent and more considered breakfasts, lunches, and dinners.

The trick to dieting for me has been to go easy on myself. I used to eat junk food all the time and occasionally have a healthy meal but that didn’t make me healthy. Now I try to eat better every day and enjoying junk food in moderation doesn’t define my diet.

Meal logging sounds like a lot of work, but you probably eat the same foods routinely plus MyFitnessPal and similar apps have nice databases of nutritional information for lots of foods. This has also helped me be more thoughtful about my eating habits. If I couldn’t put a number on my eating habits, I might severely overestimate how much I’m eating and diet all wrong. Instead, I can see when I have room for a Pokémon Go frappe without missing my goal.

It’s the same story for Apple Watch fitness tracking. It’s key for me to be able to gauge how much effort is enough without going overboard and thinking I have to do something unsustainable to be healthier. 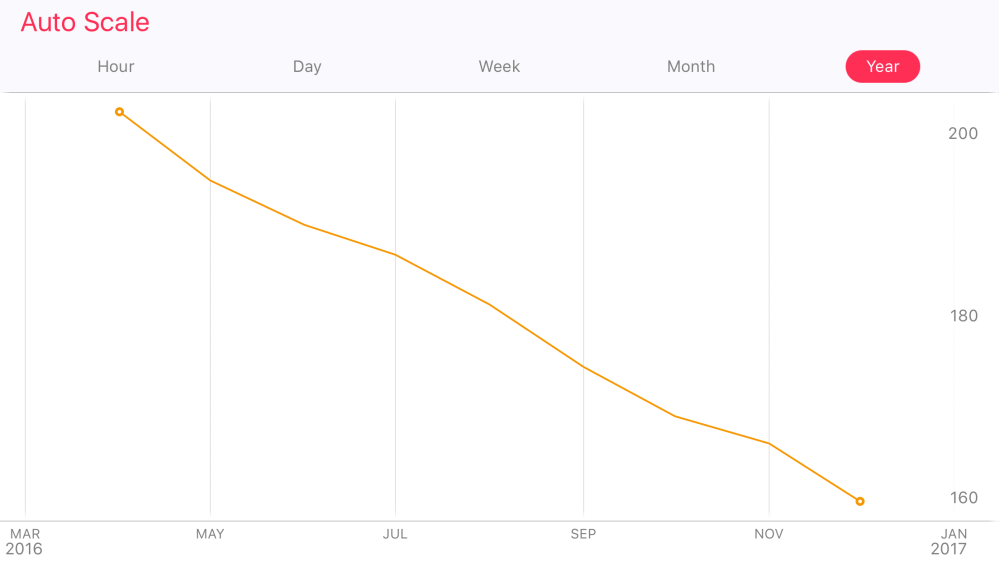 I’ve also found that weighing regularly has been very motivating. For me weighing daily has been most helpful, but weekly is usually recommended. I like the most amount of data I can capture and seeing patterns (up and down but overtime way down) has motivated me. I wake up every morning, put on my Apple Watch, weigh, then use that number to either feel good about my progress or push myself a little more while keeping the big picture progress in mind.

I log my weight in Apple’s Health app, and seeing the number charted over time has been super informative for knowing how well I’m doing or if I’m off track. I started this with a basic scale and entering the data point in manually each day, then I upgraded a few months ago to a smart scale that adds the data automatically using HealthKit.

I honestly never thought I could lose 50 pounds when I started in April — especially by the end of the year — but using Apple Watch to build a routine and quantify my effort helped make it possible. 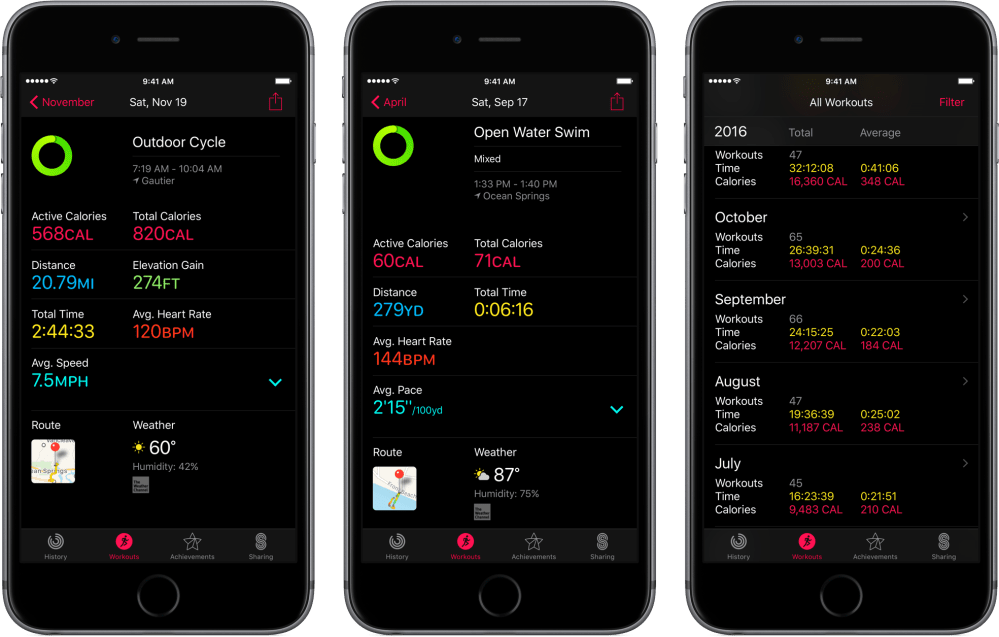 My initial goal was to lose ten pounds and I’ve taken it ten pounds at a time since I started without dramatically changing my routine. Starting a streak in the Activity app especially helped, which also made traveling during my summer vacation a bit challenging.

When my wife and I drove 15 hours to Washington D.C. in August, I decided ahead of time that breaking my streak for a vacation would be fine. We ended up driving overnight both ways and shared driving duties so I was able to complete my Activity Rings during the day without breaking my streak.

While I wouldn’t recommend everyone try so hard to keep a streak going, I have to admit that the effort on those two days pushed me to keep going on days when I didn’t actually have an excuse to slow down.

This is where Apple Watch has seriously changed something about my life aside from helping me lose weight. I find time to squeeze in time for myself to exercise every single day, and this usually improves something about the rest of my day.

For example, on both Thanksgiving and Christmas, I ran a 5K at sunrise which gave me time to think about the day and appreciate the hours ahead. I felt accomplished before the day really even started which helped me feel present in the moment for the rest of the day. (I also wake up earlier on most days to sort of game by Stand goal by getting an early start on it.) 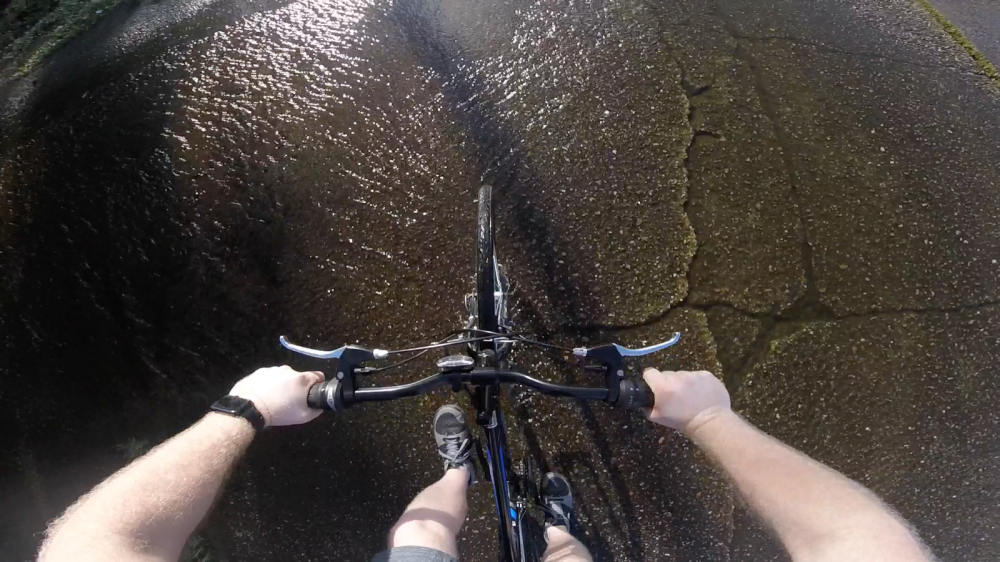 Exploring new workouts and routines with Apple Watch has also been a blast. I started out running but I really wasn’t good at it so decided it wasn’t for me. Apple’s Workout app can track elliptical workouts so I bought a used machine for my home office and made using it my daily exercise. I purchased a bike to add outdoor cycling to my routine just because the Apple Watch supported the workout and I wanted some variety in my routine. 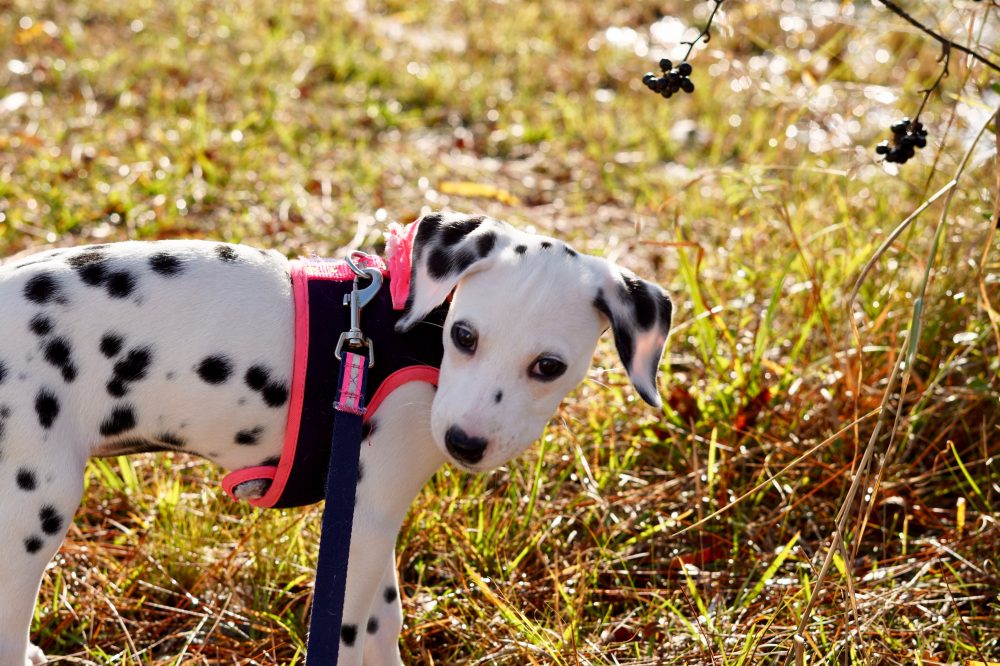 My journey with Apple Watch has even expanded my family. I adopted a Dalmatian puppy named Hayley a few weeks ago. I’ve always admired Dalmatians, but they’re very active dogs and I was not an active person before. I was admittedly too lazy and inactive to be a good dog owner before. Now that I’ve transformed my lifestyle, I have a new running partner and my daughter has her first puppy.

I’m seeing positive effects in different areas of my life all the time after taking a few steps back in April to do something different.

When the weather warms up, I look forward to regularly swimming as part of my exercise routine. I tested swim tracking when Apple Watch Series 2 first launched in September, but for now, the water where I live is a little too cold for swimming so I’ll wait for warmer weather. 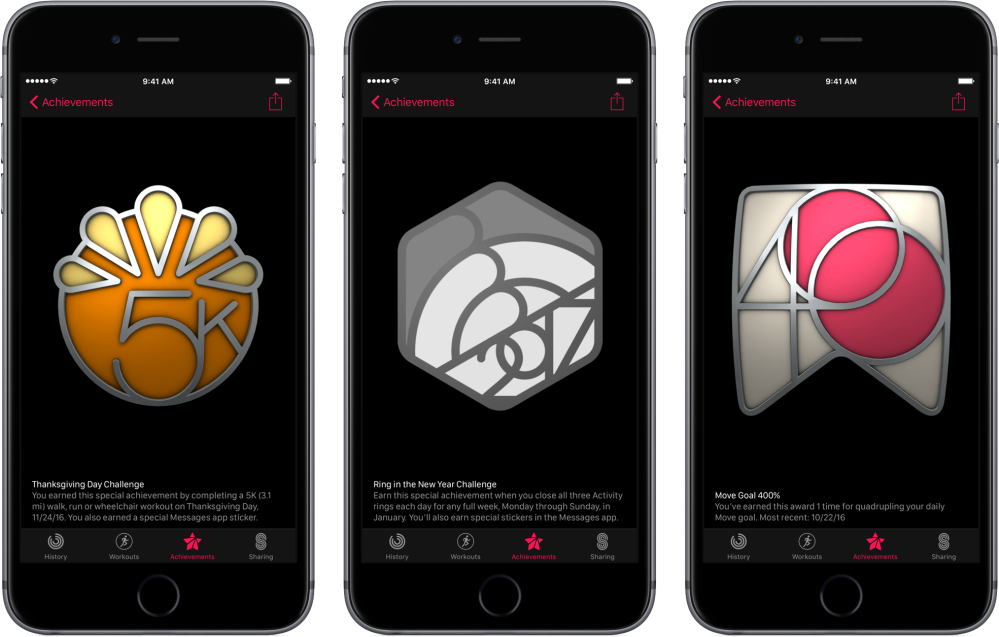 Weight loss aside, I absolutely love how transformative Apple Watch has been in my everyday life. For anyone on a similar journey, I recommend starting slow and going easy on yourself. Stick to your routine even if you break it here or there. Apple’s Ring in the New Year Activity Challenge is a great place to start, but there’s never a bad time to start being more active whether it’s January 1 or June 15 if it’s something you want to do.

New Year’s resolutions can be counterproductive if you feel like you have to get it right this time or wait another year to try again. If being more active is something you want to do but it doesn’t click today or this week or this month, keep your goal in mind and not the timing. For me, I fell off the wagon after only a few days last New Year’s Day, but picking back up on April 1 has tremendously helped how I feel about this New Year’s Day.

I’ve also found sharing the experience with others along the way to be super beneficial. Apple’s Activity Sharing is fun to use with friends and family who use Apple Watch, talking about my goals and progress openly has helped me stay accountable, and keeping track of my progress has helped me feel good about my effort.

Detail your effort on Facebook or Instagram or Twitter or Snapchat or wherever you feel a sense of community and you’ll be surprised at the encouragement that may come your way. 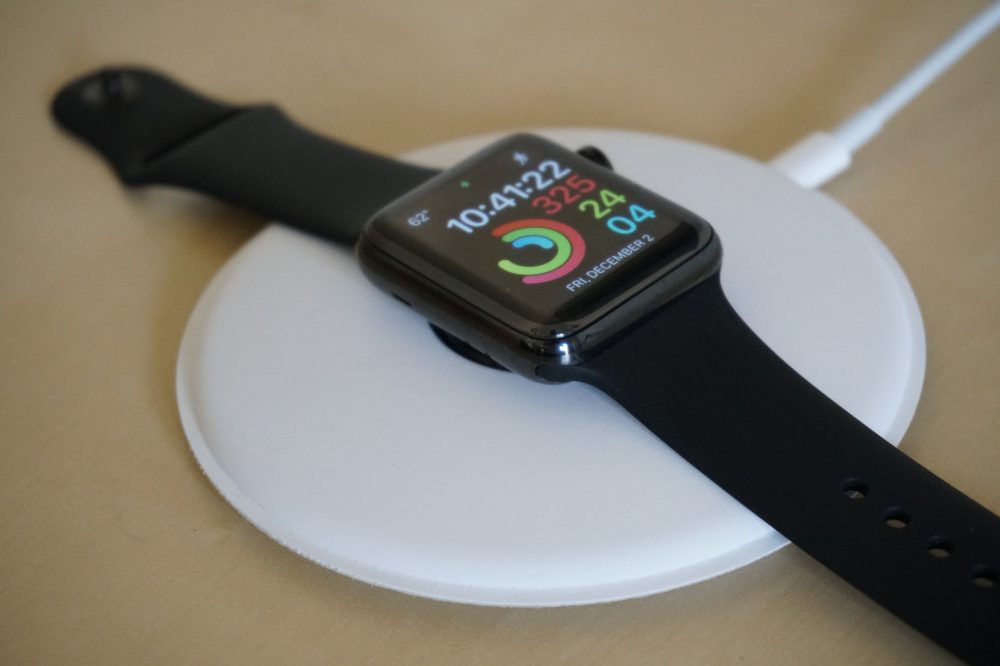 I’m still a few pounds away from where I want to be personally then I want to explore new workouts and basic muscle-building, and Apple Watch has seriously helped me gain confidence in accomplishing this goal in ways that didn’t feel possible before. Going from super inactive to just trying to exercise every day can be a challenging transition, but today it just feels like an essential part of each day after a lot of failed starts in the past.

There’s something super effective for me about gaming health with easy-to-capture metrics and achievable short-term and long-term goals. I could diet and exercise on my own but I had no idea where to start before; relying on Apple Watch as a coach has totally made the difference for me. Apple Watch has tremendously helped motivate me to change my life for the better and I’m happier for it today.

If you’re embarking on a similar journey with Apple Watch, I would love to hear from you. Happy New Year and best of luck on your goals!