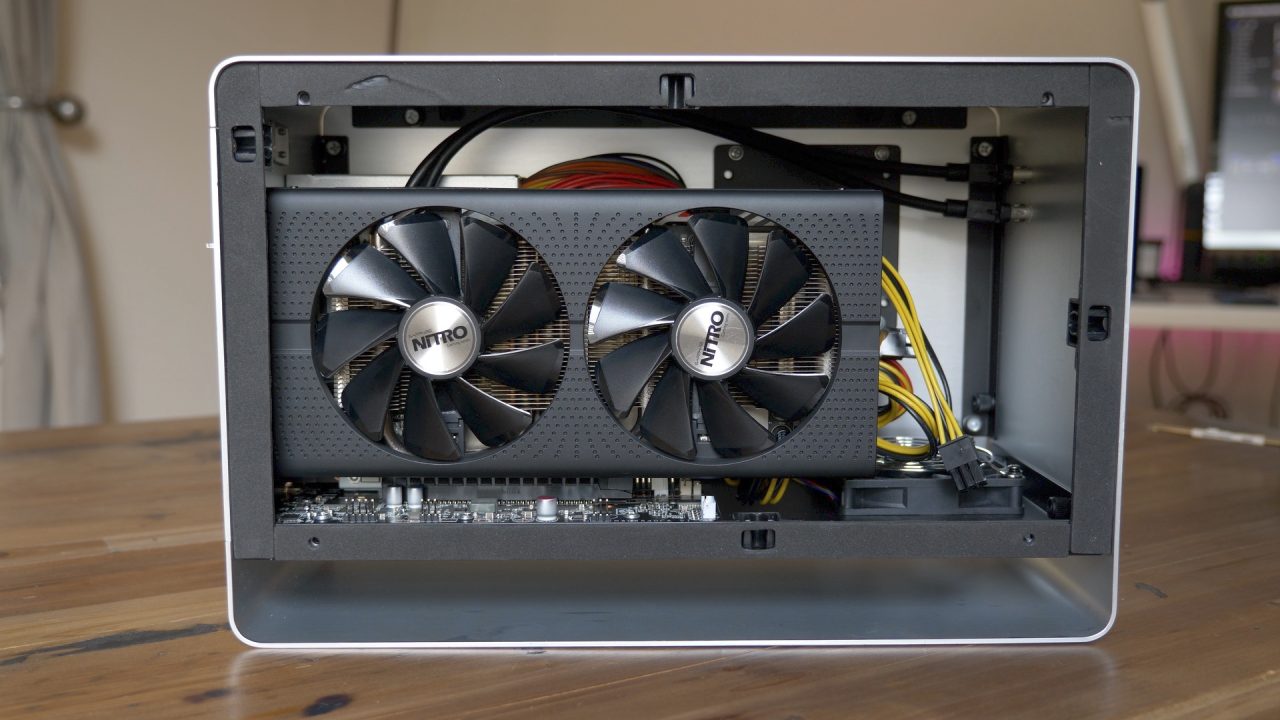 Mantiz’s Venus is an upcoming eGPU box and docking station for Thunderbolt 3-enabled laptops like the 2016 MacBook Pro. The Taiwanese-based company is working on bringing two eGPU boxes to market — the eccentric-looking Saturn, and the more subdued-looking Venus.

The friendly folks at Mantiz agreed to send over a Venus eGPU/docking station, allowing me to take it for a quick test drive when paired together with my 13-inch 2016 MacBook Pro. Featuring an all-aluminum outer shell with classic Mac Pro cheese grater-inspired perforated design, the Venus is one of the more attractive eGPU solutions that I’ve seen thus far. Have a look at our hands on video walkthrough inside for more details.

One of the things that sets the Mantiz Venus apart when compared to something like the Akitio Node, is its available I/O. The Venus features a whopping 5 USB 3.0 ports along with an Ethernet port, and SATA connection. Although that’s a fairly simple thing, it makes the Venus feel more flexible and capable when compared to an eGPU box with no ports.

Design-wise, the Venus seems right at home next to my MacBook Pro. With a distinct style that harkens back to the Mac Pro tower days, the Venus is good-looking, although not a unibody style. The cheese grater side of the case is removable, and features a dowel setup that lets you open and close the case without needing screws.

Inside the unit, you’ll find a Thunderbolt 3-enabled board featuring a single 16x PCIe slot. The Venus, with maximum internal space of 330 x 152 x 44 mm, is large enough inside to accommodate your favorite full-length, double-width GPU. There are also front and rear I/O boards that provide the USB and Ethernet connections, along with an internal SATA connection. 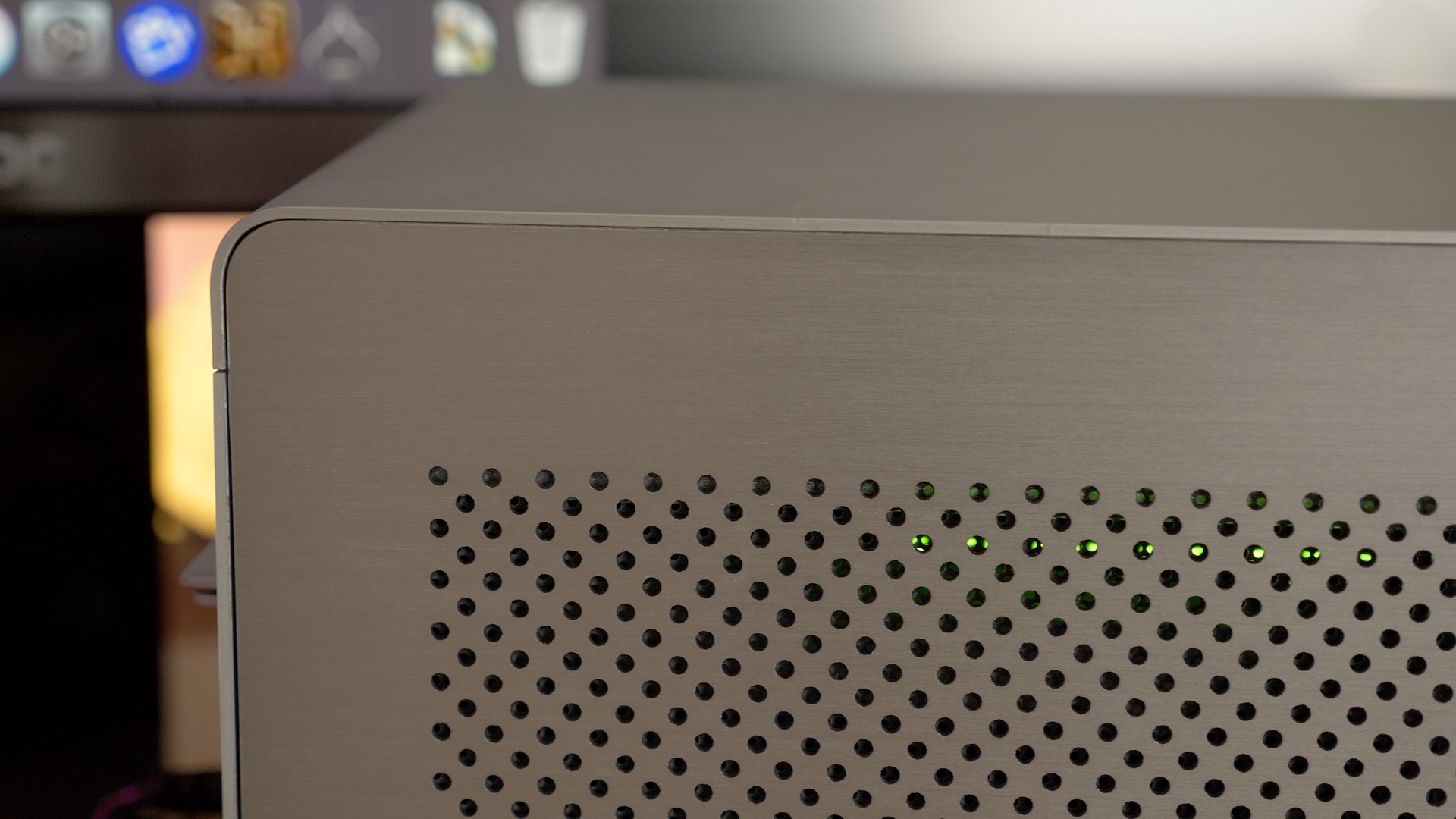 In the rear of the device sits an internal 550W (Gold) PSU that can power virtually any GPU with ease — even the recently-released 1080 Ti or Titan Xp. Mantiz states that the power supply can provide up to 375W of power to eligible GPUs. 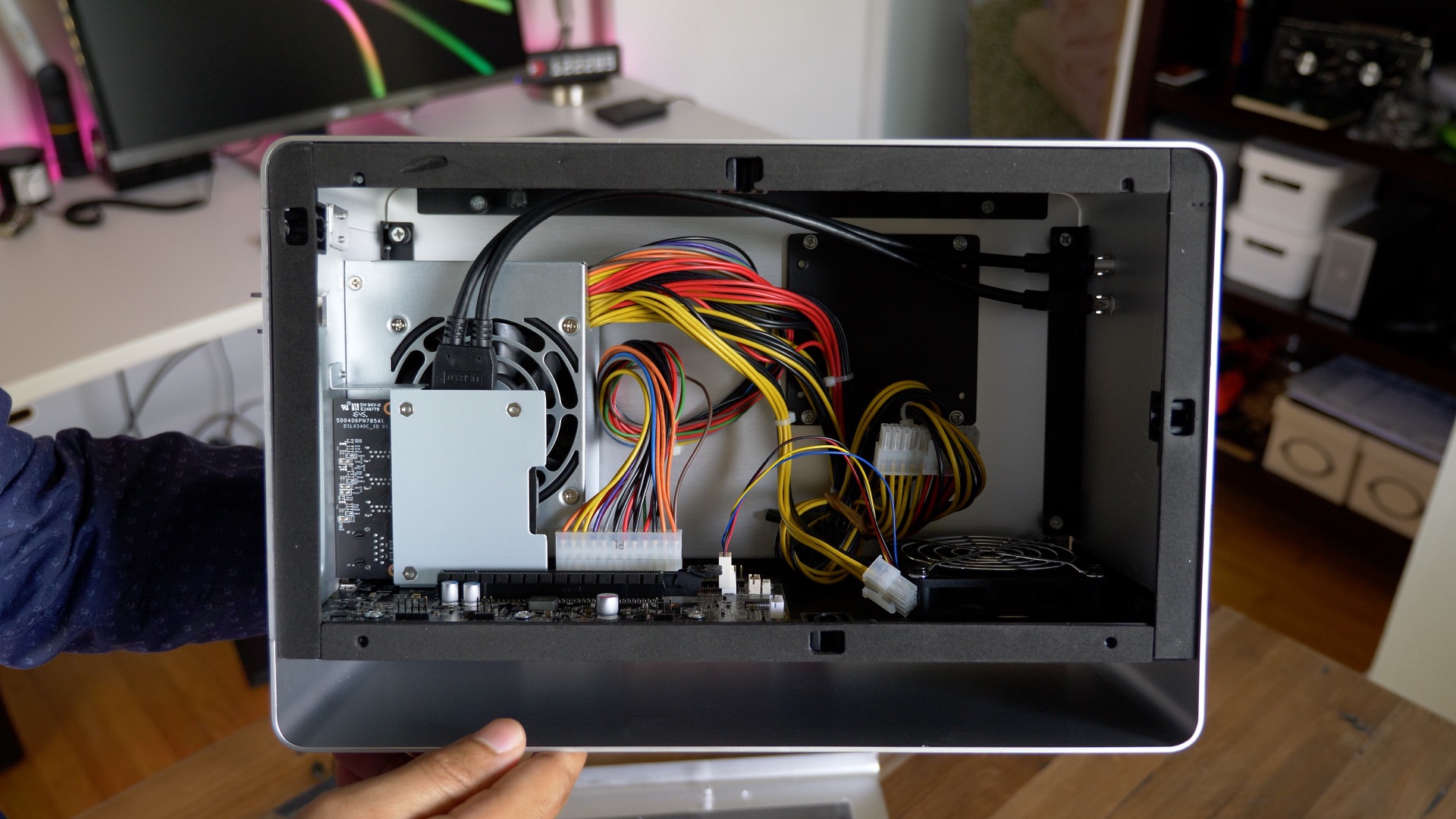 To keep things cool, there’s a fan for the power supply and a downward-facing fan near the front of the unit to push heat out via the raised portion of the Venus. The PSU fan is mostly quiet, but the case fan is somewhat whiny, especially when pushing the GPU inside. This is probably my least favorite part about the Venus unit that I’m testing. It should be noted that you can disable the fan by removing its pins from the power connector on the board, but you’ll want to take care to ensure that the components don’t get too hot.

Notably, this eGPU box supports meaningful USB Power Delivery. The Venus is capable of delivering 87W of power via the included Thunderbolt 3 USB-C cable to a connected laptop. This means that it’s a great match for both the 13- and 15-inch MacBook Pro, the latter of which needs 87W for full speed charging. 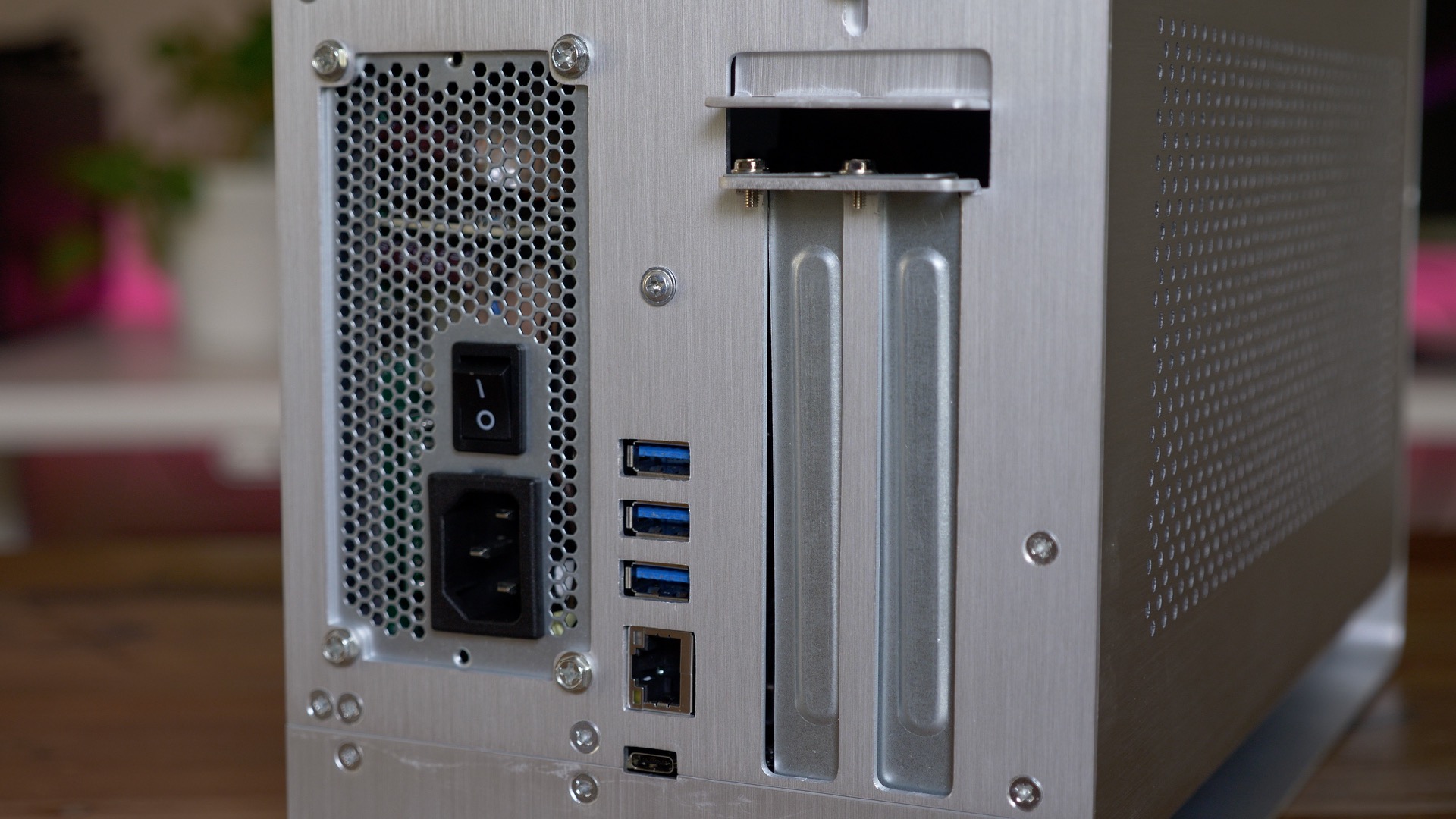 At 163.9mm (Width) x 339.9 mm (Depth) x 215.8 mm (Height), the Venus is more compact than the popular Akitio Node we’ve previously showcased, although it is a slightly wider when compared side-by-side.

The fact that the Venus is able to supply full power over Thunderbolt 3 to a MacBook Pro, and the fact that it features several I/O options (USB, Ethernet, SATA), makes it particularly attractive. But it’s not just attractive from a feature perspective, I’m a sucker for the raw aluminum outer design as well. 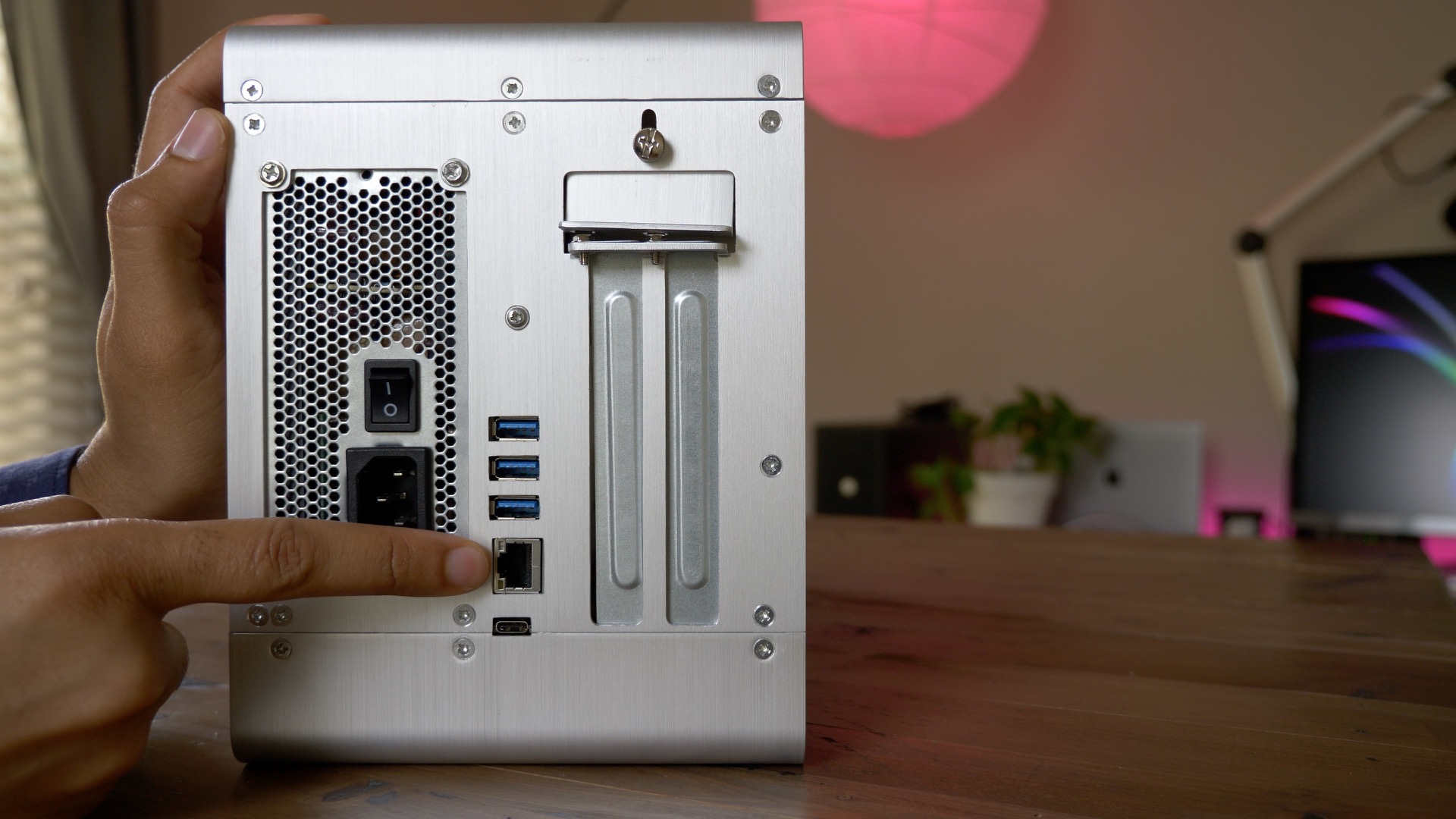 Of course, eGPU boxes aren’t yet the perfect solution for those wishing to obtain more power from their MacBook Pro. The hardware is limited by macOS (you can’t easily drive the internal display without resorting to workarounds, for instance), and both AMD and Nvidia cards have their own set of drawbacks that are well documented. Yet, there’s no questioning that you can derive extra power from an eGPU, and it’s particularly nice for gaming, or when mated with a Windows Boot Camp installation.

With Apple’s renewed focus on the “pro” user, here’s hoping that it will add better support for eGPU boxes. When, and if that happens, the Mantiz Venus looks like a solid option for $389. It’s a bit more expensive than the Akitio Node, but you’re also getting a more attractive, smaller eGPU unit with more I/O options, and full USB Power Delivery for MacBook machines. 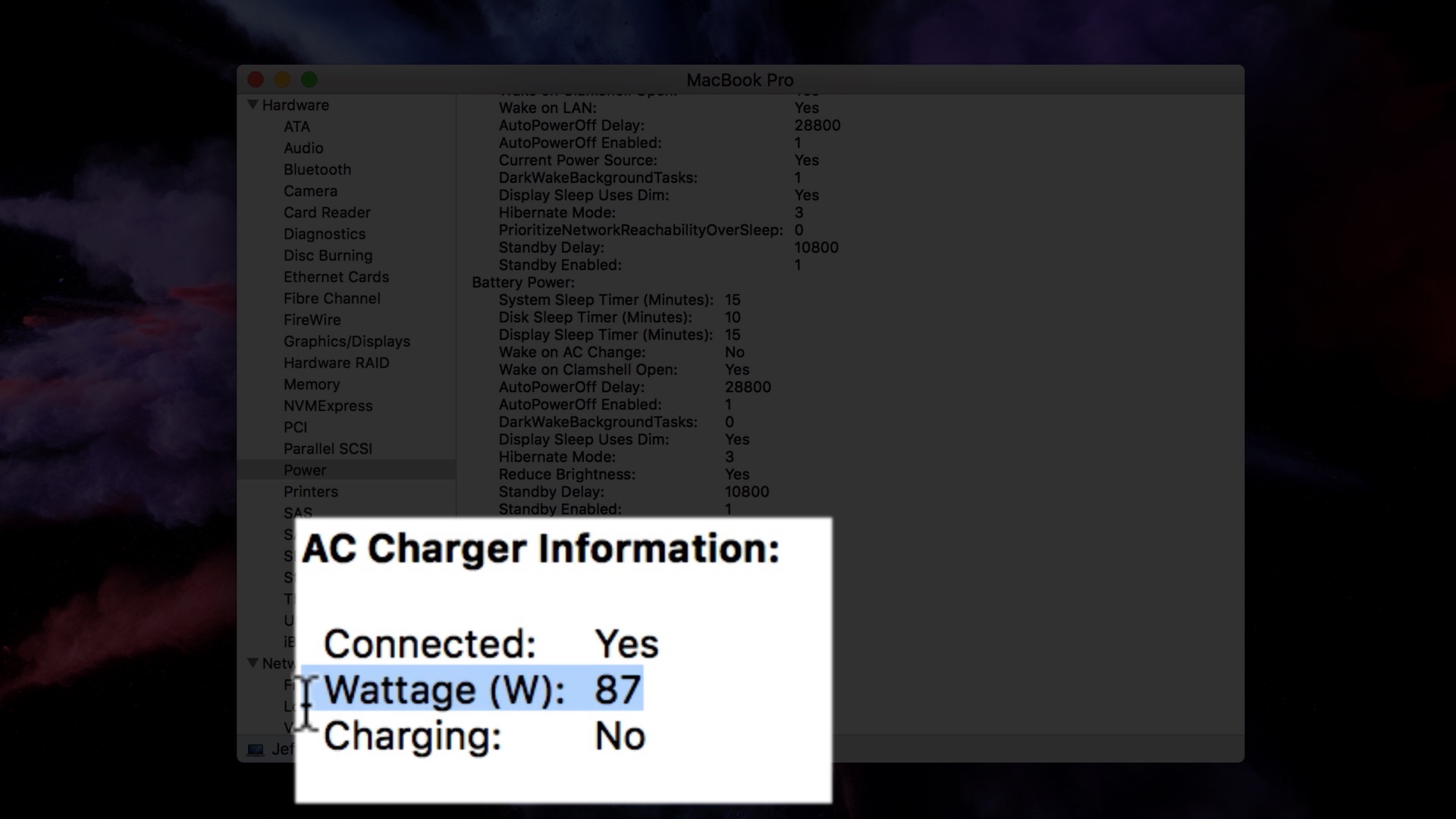 The main downside to the Venus is its whiny case fan, but I’m overly-sensitive to noise. Depending on your tolerance, you may be able to deal with it, otherwise it may be possible to replace the fan with something quieter.

The Venus is also not hot-swappable in macOS. Unplugging the Thunderbolt 3 cable will cause macOS to experience a kernel panic. 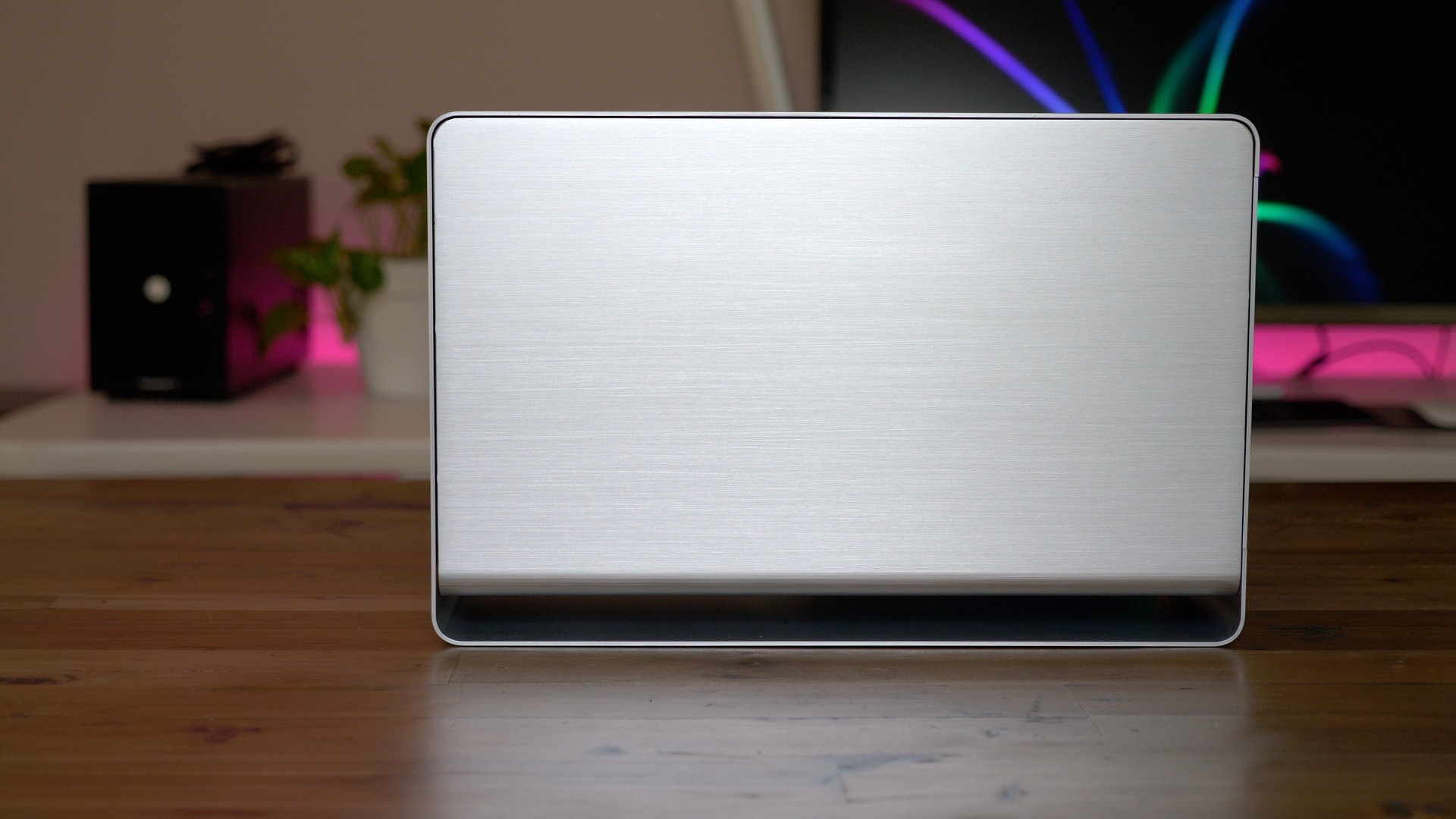 Mantiz’s website will allow you to order the Venus now, but the unit is apparently still going through the approval and certification stages, so availability may still be some weeks out.

What are your thoughts on the Mantiz Venus eGPU? I personally think it’s pretty excellent, as long as you’re aware of the limitations of eGPUs in general on macOS. Sound off in the comments below with your thoughts and opinions.