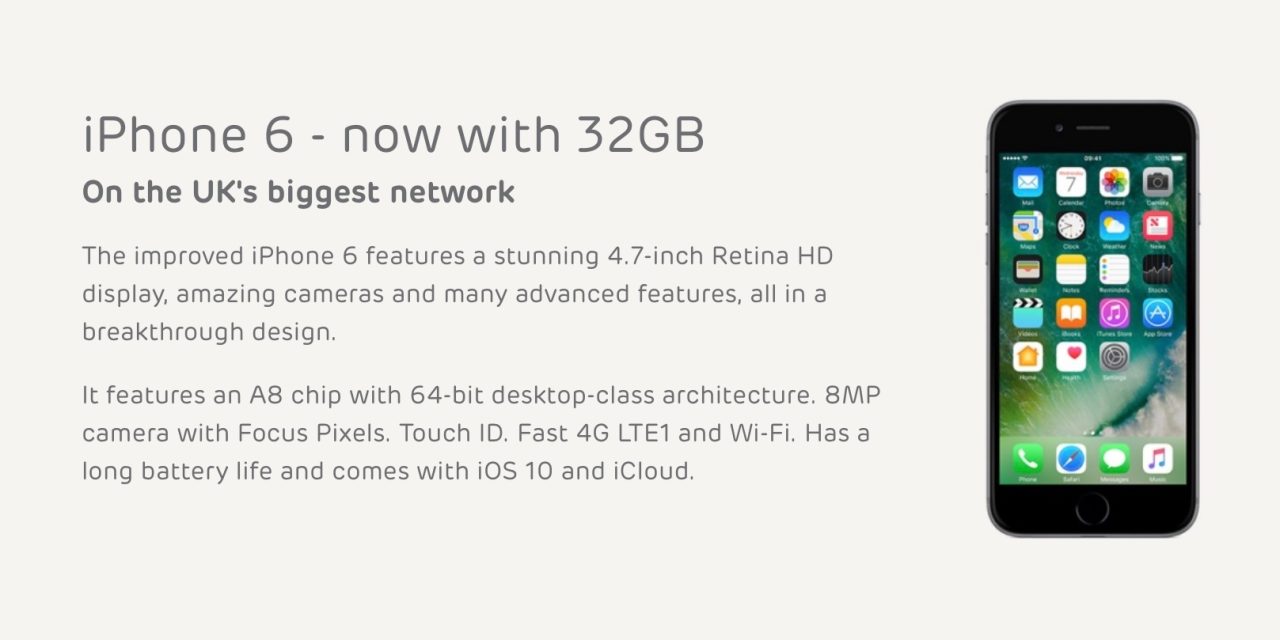 Over the last few months, Apple has quietly relaunched the iPhone 6 in a ‘new’ 32 GB configuration around the world. The company has opted not to sell the product directly, instead distributing the device via carrier partners.

The 32 GB iPhone 6 originally debuted in emerging markets, presumably as a lower cost option, but has more recently appeared in the US — and now it has hit the UK too …

In the United Kingdom, the 32 GB iPhone 6 launched today on the EE network. The model is the same as the SKU offered in the United States, available only in Space Grey.

The most remarkable thing about this phone isn’t the phone itself but the fact that Apple decided to bring it back. Its technical specifications are identical to the device from 2014 except for the storage bump; the original run of iPhone 6 was only ever offered in 16/64/128 GB options.

In case you’ve forgotten, the iPhone 6 was the first iPhone with a 4.7-inch display and features an Apple A8 chip and an 8-megapixel camera.

It seems like Apple is selling this phone again as a way to boost iPhone sales in a quiet period as many high-en customers await the next-generation devices coming this fall. However, the 32 GB iPhone 6 is not a great purchase for UK buyers.

The EE carrier plans are not really competitively priced for a phone handset that is really several generations old. You have to commit to a 24-month contract to get it and it’s not that much cheaper than a brand new iPhone 7 with the same data plan.

Separately, we have been hearing that EE will soon be expanding its free Apple Music subscription promotion to existing customers. Soon, many EE iPhone customers will be able to take advantage of an offer that gifts them a free 6 months of Apple Music (exact terms and conditions are currently unclear).

The 32 GB iPhone 6 has been launched in the US, India and many European markets in recent weeks.