A decade without discs: The original MacBook Air turns 10 today 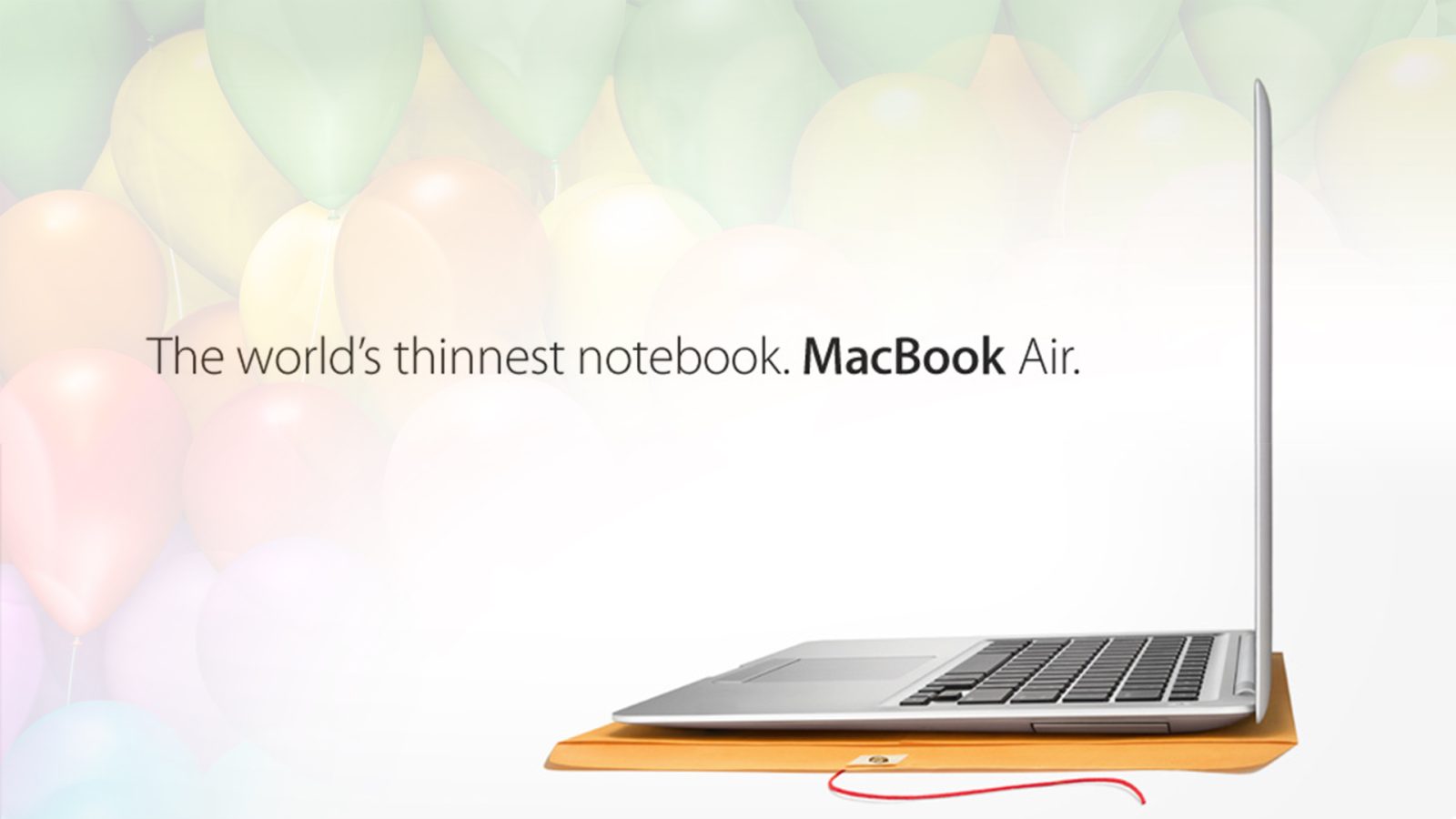 The first new product Steve Jobs announced after taking the stage for the Macworld 2008 keynote was Time Capsule, a router and wireless backup solution designed to work with Time Machine, Apple’s then new backup software. Jobs would talk about another kind of time machine before the keynote was over: the MacBook Air.

Announced on January 15th, 2008 – 10 years ago today – the original MacBook Air gave us a glimpse into the future of Apple’s plans and ambitions across all of their product lines. A decade later, we’re taking a look at how the MacBook Air set the tempo for today’s modern devices, redefining the Mac and informing the direction of the iPhone and iPad as well.

There’s something in the Air

The unveiling of the original MacBook Air more closely resembled a magician’s act than a product launch. Grabbing a standard office envelope from his podium on stage, Steve Jobs pulled an impossibly thin computer out of the sleeve, like a rabbit popping out of a hat. The crowd was stunned.

It’s important to consider the state of the Mac in early 2008. The MacBook was still housed in a plastic shell. The 15-inch MacBook Pro weighed a whopping 5.4 pounds. Only recently had the iMac gained an aluminum enclosure, and the Mac Pro was practically as tall and heavy as a living room end table. The MacBook Air felt like a radical departure from the familiar – because it was.

The MacBook Air was the first Mac since the original iMac to ship without an internal CD/DVD drive. It was the first Mac to embrace a wireless future where ports and cables were discarded in favor of reduced weight and thickness. It paved the way for placing SSDs in all modern Macs instead of slow, mechanical hard disks. It brought the widespread adoption of multi-touch trackpads to Macs. And, as Apple was quick to note, it was the world’s thinnest notebook.

With the MacBook Air came another step forward – a public focus on Apple’s environmental efforts. An all-aluminum case, mercury-free display with arsenic-free glass, and BFR and PVC-free circuit boards were all touted as firsts. Apple has been very vocal in its materials progress ever since, proudly displaying environmental scorecards at new product launches.

On stage, Steve Jobs detailed how other manufacturers made significant compromises in their ultra-portable laptops. Full-size keyboards were sacrificed, displays were shrunk, and processors limited. The original MacBook Air, too, was a machine born under the weight of constraints. Its CPU and RAM options were not suitable for demanding tasks. Storage was limited to a slow 80GB spinning drive or a fast but small 64GB SSD. And the price? $1799 for the base model, and an incredible $3098 if you opted for the SSD. The same amount of money could’ve bought you a 17-inch MacBook Pro or high-end iMac at the time, with change to spare.

The winds of change

The excitement of an ultra-thin notebook was somewhat tempered by skepticism about the Air’s design. With the exception of a MagSafe charger, all of the machine’s connections were housed inside one flip down door. A single headphone jack, USB 2.0 port, and Micro DVI connector (does anyone even remember those?) were user’s only options. The change was shocking for customers who were used to a buffet of ports lining both sides of their laptops.

In 2008, there was no Mac App Store, and a lot of users still had large DVD collections. To mitigate friction, Apple began offering (and still sells today) an external USB SuperDrive for legacy use cases. They also offered Remote Disc, software still built into macOS that allows sharing discs between computers. Today the feature feels a bit like a novelty, but in 2008 it was critical for customers who had taken the plunge into a wireless future. 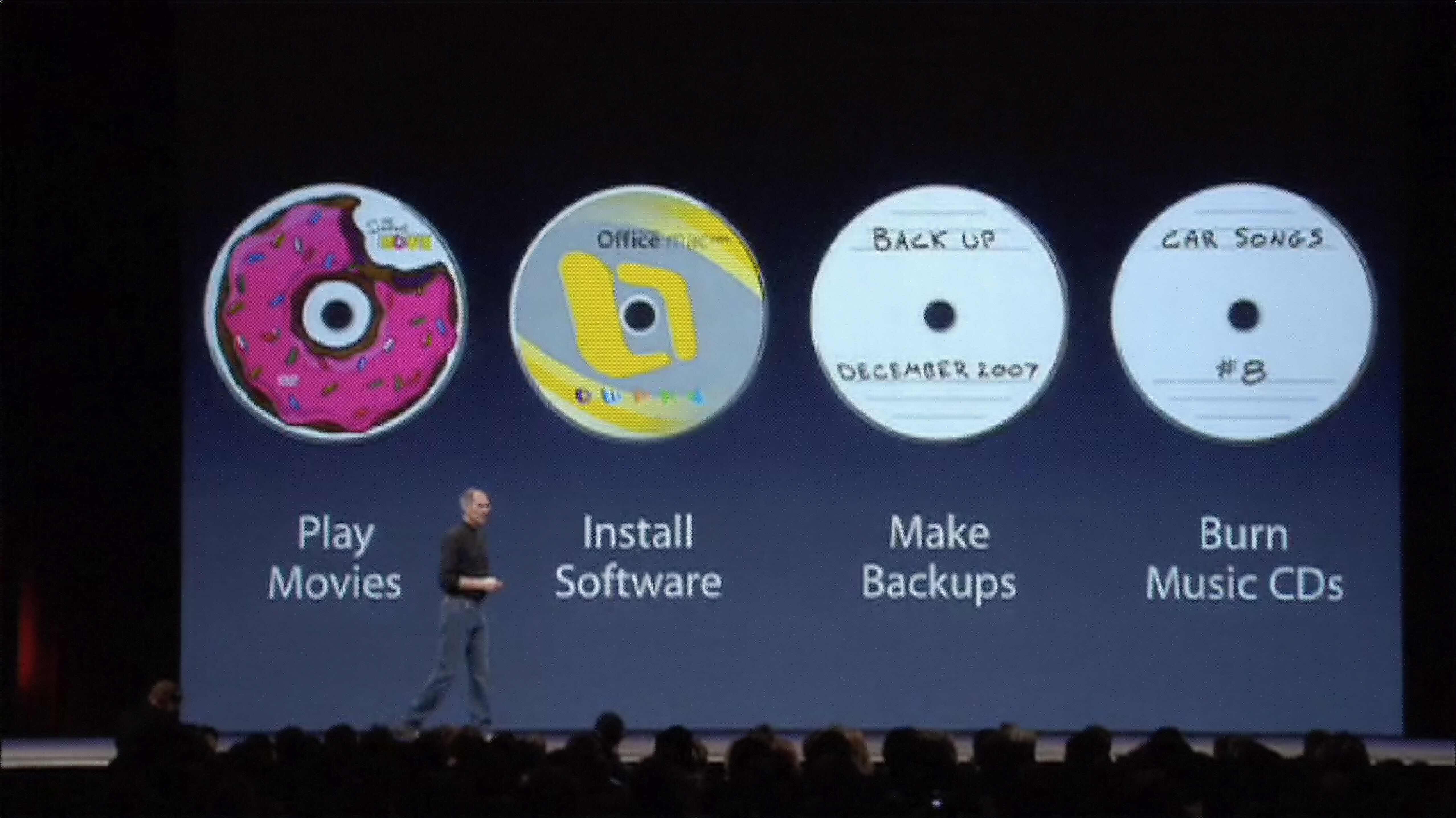 Watching movies and listening to music is handled by streaming services like Netflix and Apple Music. In 2010, the Mac App Store launched to handle disc-free software downloads. A year later iCloud followed, and with services like iCloud Photo Library and iCloud Drive, many users no longer worry about manual backups at all.

Apple rapidly refined the MacBook Air, releasing a faster version just a few months later in October 2008, and again in June 2009. At the company’s “Back to the Mac” event in October 2010, the second-generation MacBook Air debuted, borrowing ideas from the iPad. For the first time, every MacBook Air shipped with an SSD. Not only did this allow for an even thinner and lighter design, it enabled an increase in battery life, longer standby time, and the ability to wake from sleep instantly. Introduced alongside the standard 13.3-inch model was a new 11.6-inch MacBook Air that was even more compact.

With a new design, speedy drives, and a starting price of $999, the MacBook Air had hit its stride. Once an expensive and niche machine, the new notebooks became the “standard” MacBooks seen in coffee shops, colleges, airports, homes – everywhere. Apple followed up with annual updates that improved the machine significantly year over year. A Thunderbolt port and backlit keyboards were added in 2011, USB 3 arrived in 2012, and battery life was extended to 12 hours in 2013. A year later, Apple dropped the price of “The notebook people love” to $899.

While you can still buy an updated 13-inch MacBook Air today, the computer’s spiritual successor came in the form of the 12-inch MacBook, first launched in 2015. Following the MacBook Pro and iMac, the new MacBook would become the third Mac line to feature a Retina display, and was built on the ideals of the original MacBook Air. It was 24% thinner than the Air, operated without a fan, and dropped all ports except a USB-C connector and headphone jack. Features introduced in the new MacBook like the Force Touch trackpad and butterfly keyboard became molds for the rest of the Mac line.

Apple has repeatedly demonstrated that they aren’t afraid to leave the past behind and jump forward – even if it comes with temporary growing pains. Shipping the first MacBook Air without a SuperDrive was a leap forward, and the inconvenience of adapters and remote disc management soon became a thing of the past. Apple undoubtedly took what they learned from the MacBook Air into consideration when pushing the iPhone ahead and removing the headphone jack in 2016.

As the MacBook Air passes today’s milestone, the wireless future it promised comes into clearer focus. iCloud, AirPods, and wireless charging are all innovations rooted in an idea that we began to embrace a decade ago. Here’s to the next 10.