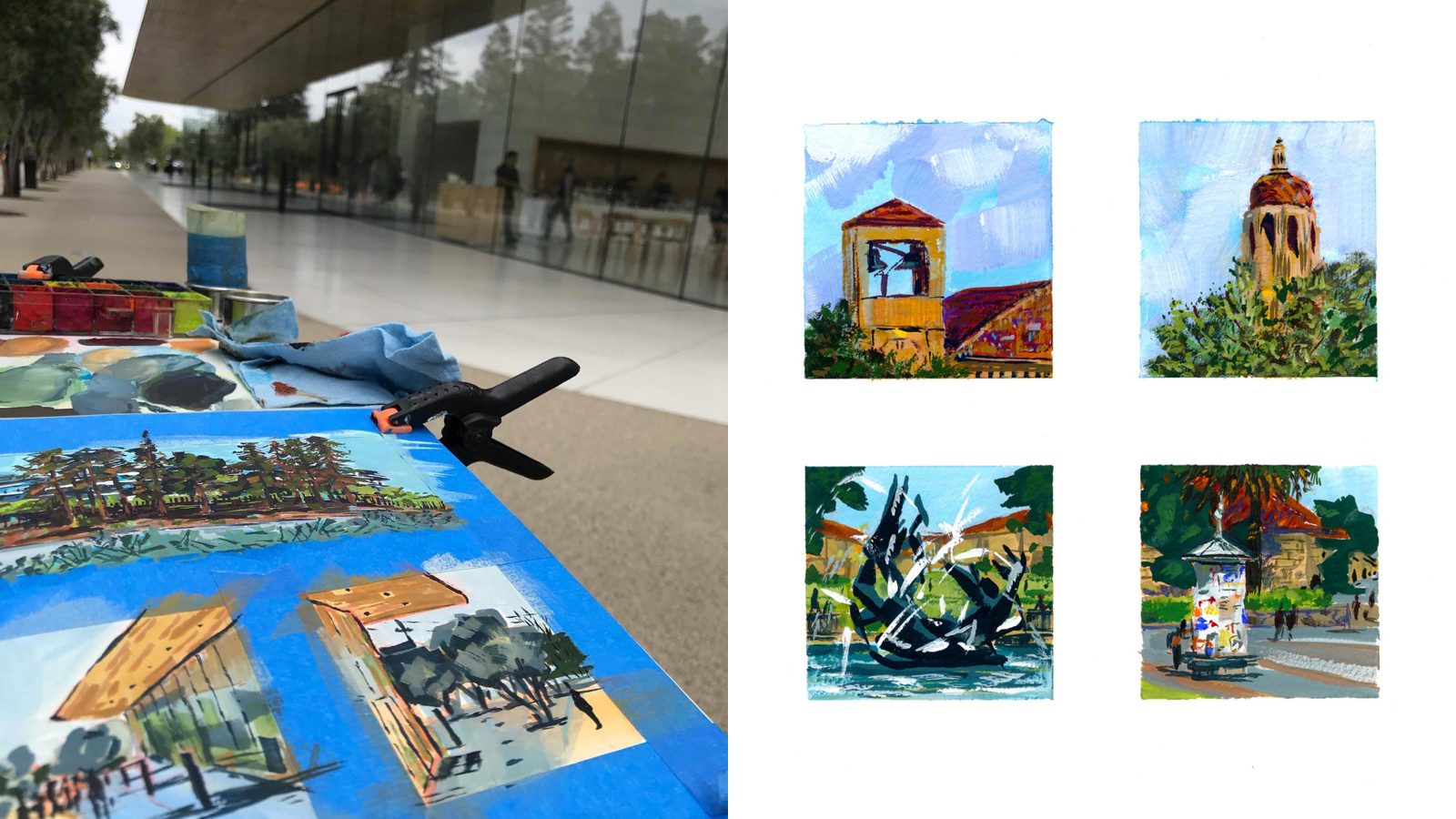 This weekend, thousands of developers from across the world will arrive in San Jose for Apple’s annual Worldwide Developers Conference. Outside of sessions and labs, the week has historically given many attendees the opportunity to explore the Bay Area’s fascinating cities from their own perspective. Inspired by the same unique landscape and architecture, one artist has embraced Apple’s creative tools to help her capture Silicon Valley as she sees it.

Nina Khashchina is an illustrator and graphic designer living in the Bay Area. From logo and brand identity design to editorial illustrations and children’s books, her work has spanned a range of creative media. This past spring, she even taught Urban Sketchers workshops to audiences at Stanford University.

The decision to document the Bay Area came not by client request but from personal inspiration. After creating some mini-paintings in Mountain View during an urban sketch meet-up, Khashchina decided to give the series a name and a goal: 100 Views of Silicon Valley. Nina explained to me that each painting is done on location and in gouache – paint that is similar in application to watercolor, but appears more opaque. 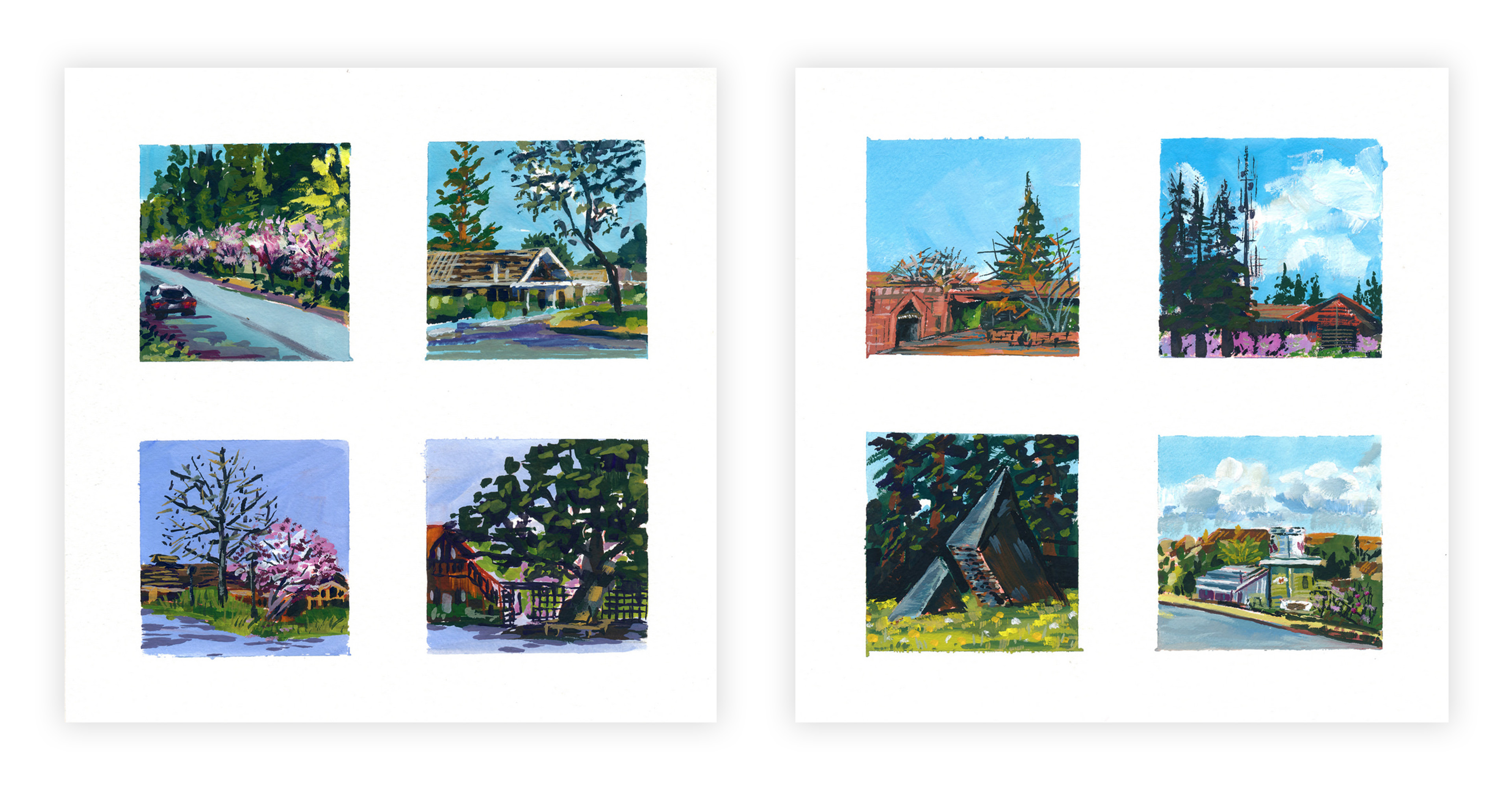 Working in graphic design, Khashchina is also an active user of Macs, iPads, and iPhones. Even though the Silicon Valley series is completed with physical paints and brushes, Apple’s creative tools played an integral role, she says.

Nina’s paintings often begin on her iPad Pro, where she auditions several different compositions and color combinations using Procreate and Adobe Sketch with her Apple Pencil. This saves a considerable amount of time during the decision-making process, she notes. Another of Nina’s go-to apps is Astropad, which allows her to control tools like Photoshop on a Mac with an Apple Pencil and iPad.

Another four tiny gouaches finished – for the #100viewsofsiliconvalley

Nina’s iPhone is also essential to her creative workflow from the earliest planning stages to the final digital publication of her work. She often catalogs the painting process through photos, videos, and time-lapses, some of which are shared on her Instagram page. Documenting each piece of artwork helps track time spent on individual painting details. This is important, Nina explains, because painting sessions are often short and scheduled around lunchtime.

Time constraints also make razor-sharp focus critical to completing paintings. Khashchina uses the app Noisli as a white noise generator to help her concentrate in busier environments. After a painting is complete, Nina scans it and prepares it for print or online publication using Adobe’s Creative Cloud suite of apps on her iMac. 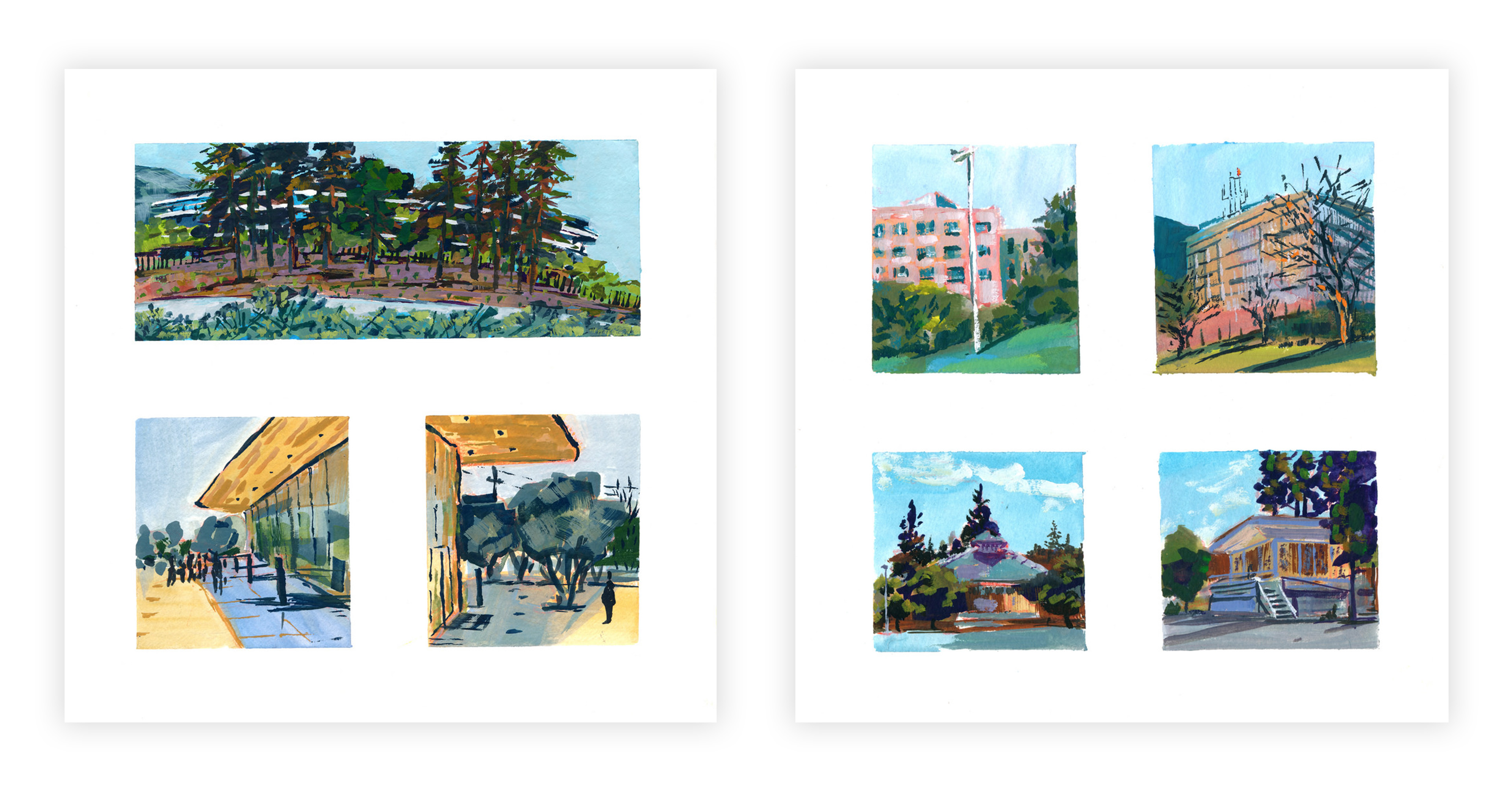 It’s fitting, then, that Nina chose Cupertino and Apple Park as the subjects of several paintings in the 100 Views of Silicon Valley series. Apple Park’s Visitor Center was painted from street-level perspective, while the main campus ring building was captured from the public deck of the visitor center’s roof (after a fruitless appeal to security for a closer look.) Many of the project’s first paintings featured neighborhoods around the northwestern side of the Santa Clara Valley, but soon Nina began receiving requests and suggestions for other favorite and iconic sites. Notable additions to the series include Stanford University, the blooming trees of Los Altos, construction of new Google facilities in Mountain View, and San Jose State University. Nina tells me she also intended to paint the HP Garage in Palo Alto, but found other buildings on the street to be much more picturesque.

Since the introduction of the iPad Pro and Apple Pencil in 2015, we’ve seen a new wave of artists emerge creating exclusively digital works. Some traditional artists have even transitioned their entire workflow to iPad illustration. Nina’s goal with 100 Views of Silicon Valley was to “create a mosaic of” the region as she sees it. By combining the flexibility of modern digital tools with the familiarity of traditional paints and brushes, the project also demonstrates the mosaic that is the creative process, a unique set of techniques that define a personal style.

More images from the project and other selected works can be found on Nina’s website and blog, Apple-Pine. She also runs an Etsy store and an active Instagram page.