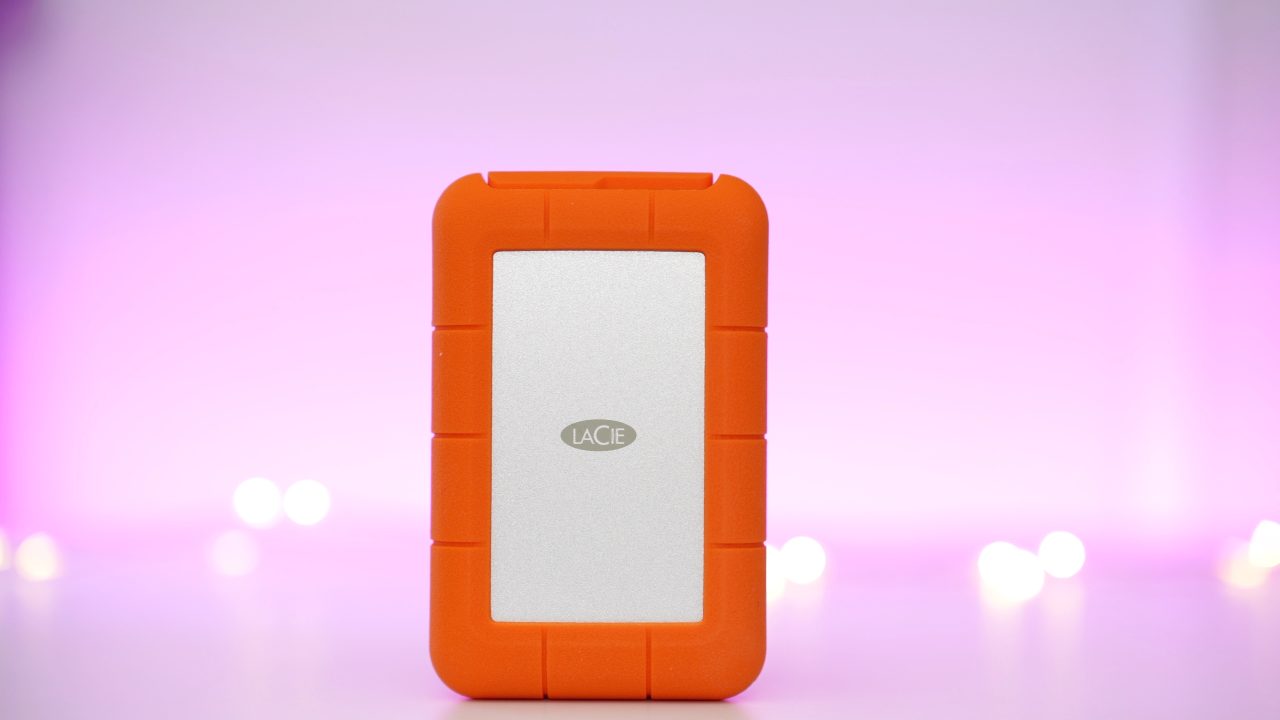 On paper, the Lacie Rugged RAID Pro won’t light up the scoreboards. Even in the RAID 0 performance mode, it features a rather pedestrian 250 MB/s max read speed. But where the drive lacks in speed, it makes up for in the sheer amount of storage offered — 4TB — stuffed inside a rugged chassis. It also comes with a feature that sets it apart from other bus-powered external drives on the market: a built-in UHS-II SD Card reader — extremely handy for MacBook Pro users.

Does the Lacie Rugged RAID offer enough to make it worthy of consideration? Have a look at our hands-on video review for the details.

If you’ve used drives from Lacie’s rugged series before, you’ll notice that the company has omitted its integrated wraparound cable in favor of a detachable USB-C cable. This design decision has pluses and minuses. The upside is that users can easily swap out cables, and even utilize a legacy-friendly USB-C to USB-A cable (included) if necessary. That said, some users will miss the convenience of the cable integration, which means you’ll always have to remember to bring your cable with you when on-the-go.

Although the drive is capable of being bus-powered via USB, Lacie also includes a power adapter with various region plug attachments for powering the drive in case the computer’s bus doesn’t provide enough juice. However, for most Mac users, bus power via a USB-C connection should be a non-issue.

Lacie suggests installing its RAID Manager app and its Toolkit app for maintaining the Rugged RAID drive. Both of these apps feature macOS versions that can be downloaded from the company’s website.

Out of the box, the Rugged RAID Pro is formatted as ExFat for easy Windows and Mac compatibility. For Mac users, the Lacie Toolkit app suggests formatting the drive as HFS+, which I did before testing.

The Toolkit app comes with two primary functions: the ability to mirror specific folders stored on your Mac’s internal drive, and a quick import option for automatically copying SD Cards as soon as they are inserted into the drive. 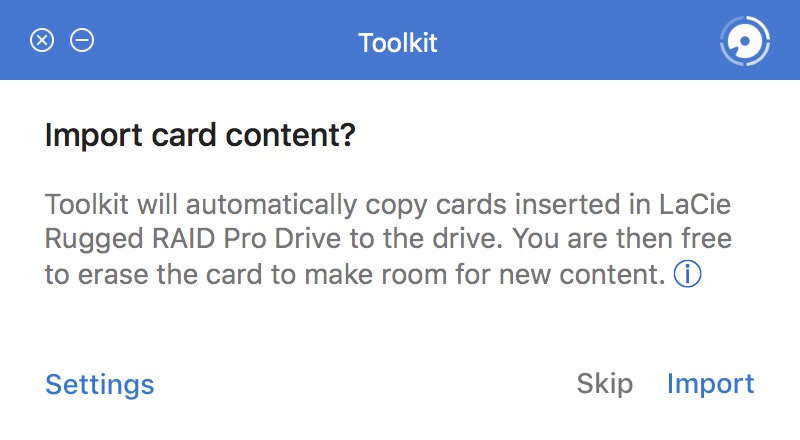 Overall I found the Toolkit app to be a mixed bag. Some of the automatic imports completed successfully, but on more than one occasion, automatic imports failed. I also noticed that imports via Toolkit could be much slower than manually dragging and dropping the entire SD Card to the Lacie Rugged RAID Pro. Based on this experience, I recommend avoiding the Toolkit automation, and managing SD Card backups manually. 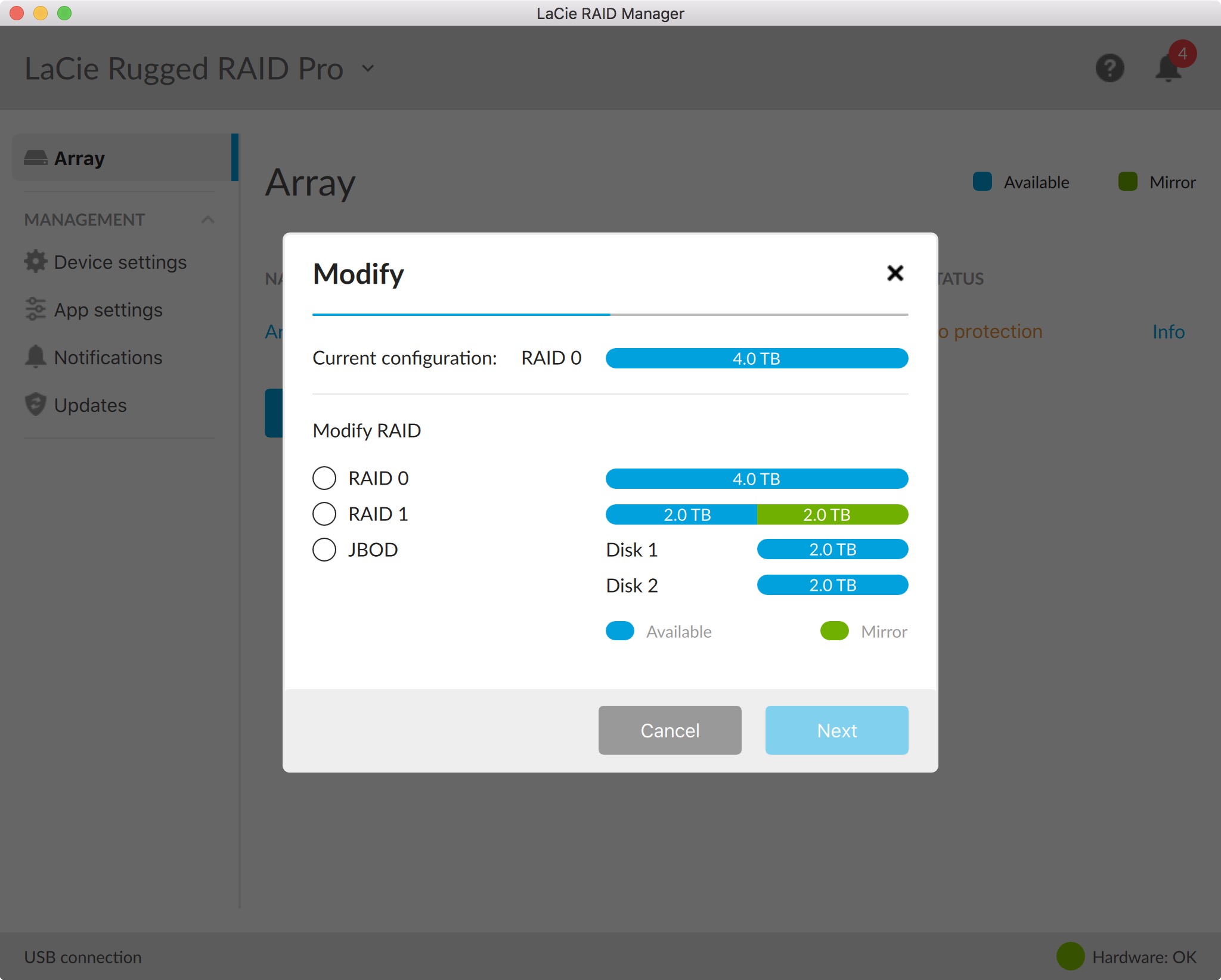 Because the drive lacks any hardware-based option for switching between RAID types, you’ll need to install the RAID Manager app if you wish to switch out of the default RAID 0 configuration. RAID Manager lets you easily switch to a more data secure RAID 1 config or even a JBOD config for utilizing the two internal hard drives as separate 2TB entities. Of course, RAID 1 or JBOD lack striping, which significantly reduces the read performance of the unit. For video workflows, such a change may have a real world effect on performance. 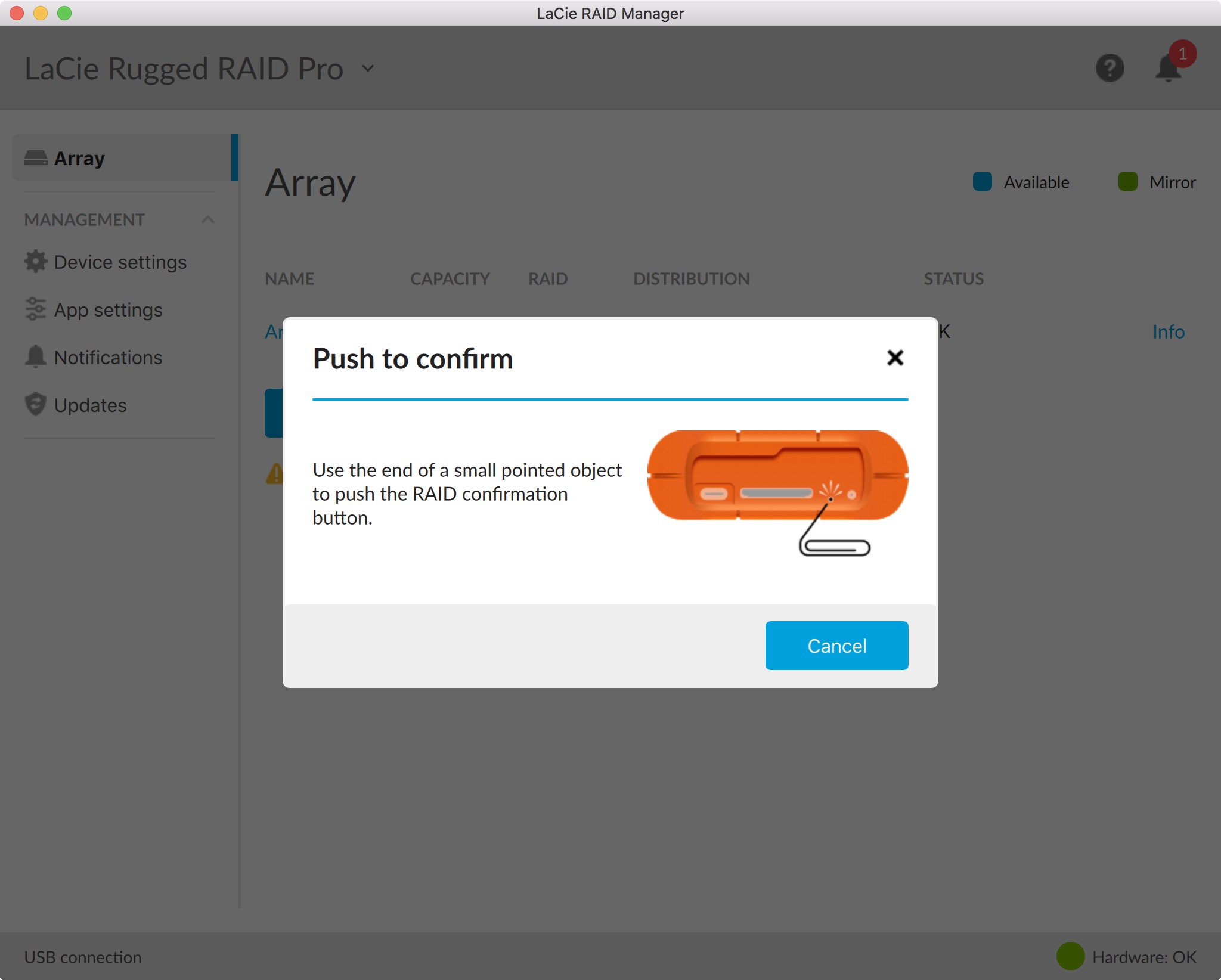 Since a reconfiguration will cause all device data to be deleted, Lacie built in a hardware confirmation switch that requires users to press a button on the front of the drive using a paperclip to confirm the configuration change. It’s an appreciated protection that just might save your data from accidental deletion.

To reach the advertised read performance of 250 MB/s, you’ll need to keep the drive configured as RAID 0. Speed tests with both Blackmagic Disk Speed Test and QuickBench confirm that the drive lives up to its billing. 250 MB/s is far from blazing fast, especially when you have external SSDs with USB 3.1 Gen 2 I/O interfaces, but it’s still fast enough for most 4K workflows using ProRes 422 HQ. 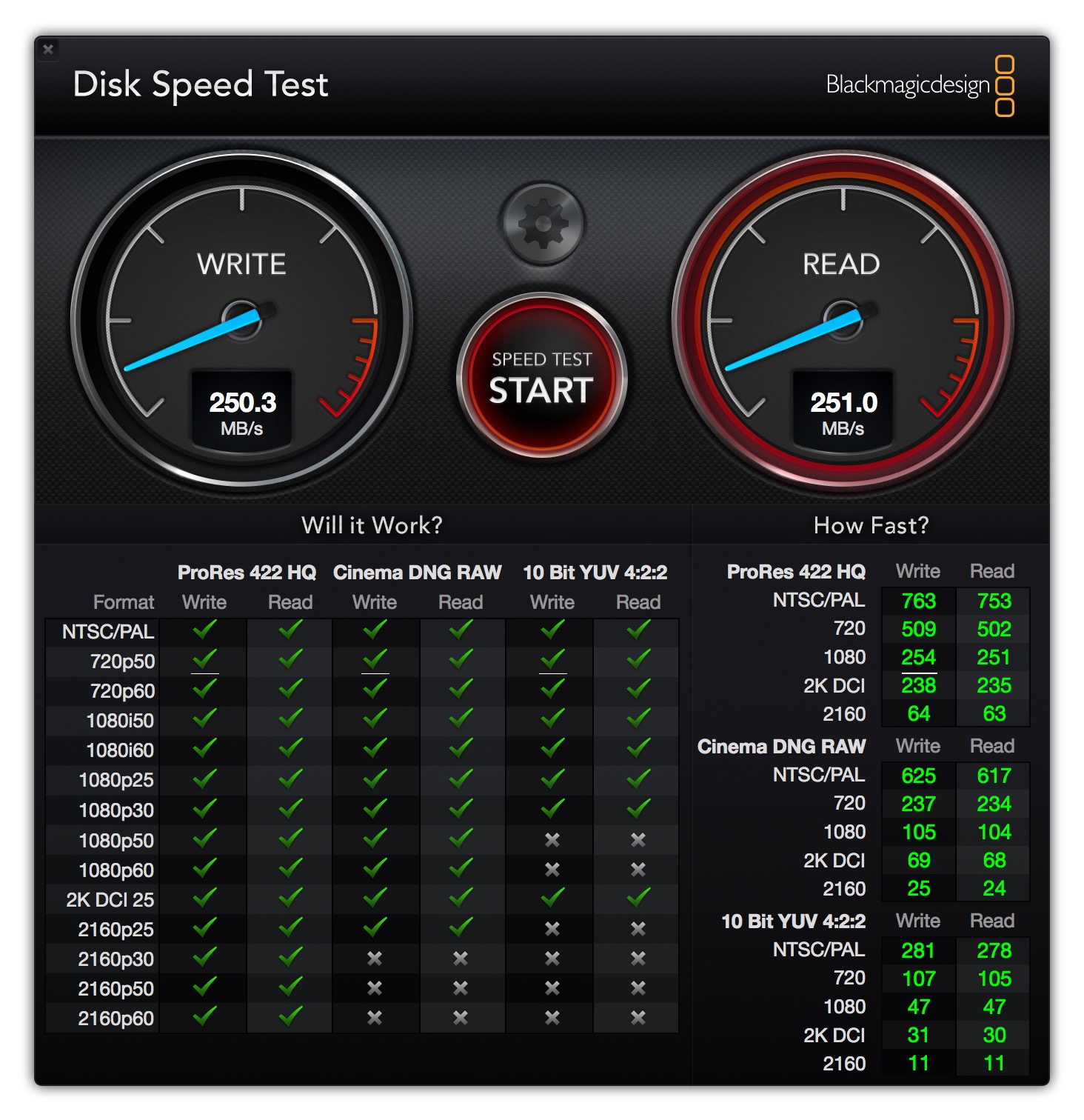 As you will see, RAID 1 configuration, which mirrors data between both internal drives to help keep your data safe, is the slowest of the three configurations. RAID 1 will also reduce the amount of available storage from 4TB to 2TB.

JBOD performance isn’t much better than RAID 1, but you don’t lose data to drive mirroring. RAID 1 configures each internal hard drive as two separate disks. There is no mirroring performed with a JBOD configuration, but the probability of failure isn’t as high as it is with RAID 0.

No surprises here. A decision must be made by the user to prioritize speed vs the chance that one of the drives in a RAID 0 configuration may fail. Although I’ve had good experiences with RAID 0 setups over the years, having never experienced a catastrophic failure resulting in data loss, I’m more willing to use such a configuration with SSDs, which feature no moving parts. Mechanical spinning disks are more prone to failure, which, in the case of RAID 0, would cause data loss across the whole array. 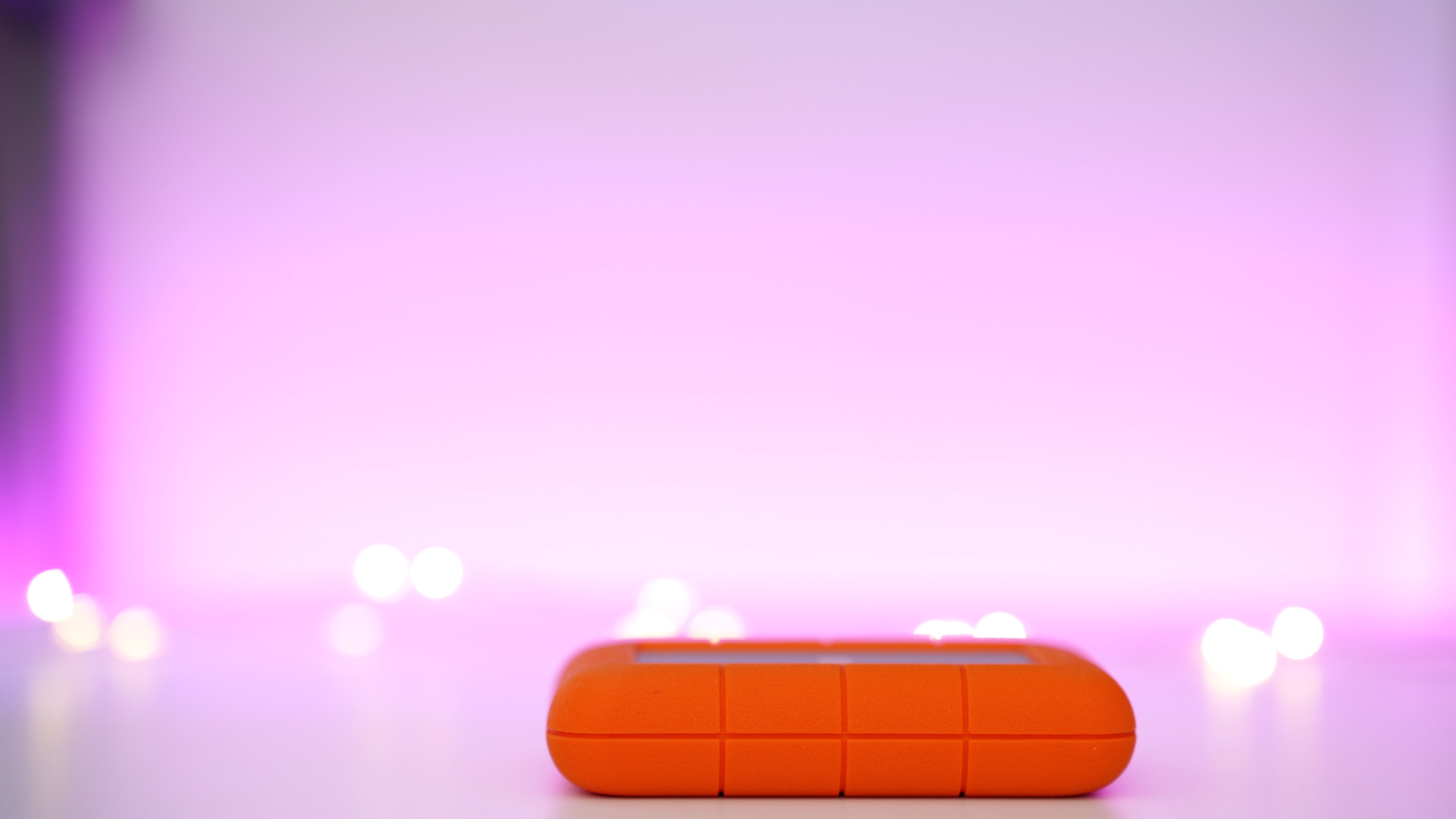 It’s sort of a catch 22, because the drive in a RAID 1 or JBOD configuration won’t be fast enough for certain video workflows. In the end you’ll have to balance the risk versus reward aspect of the drive. The good news is that Lacie is offering a three-year limited warranty with the Rugged RAID Pro, and also offers three years of rescue data recovery services with your purchase.

The most appreciated feature about this drive is its built-in SD Card reader with automatic card backup ability. If you’re constantly filling up SD Cards, then the Rugged RAID Pro, if nothing else, can be an awesome backup solution for your cards. If you’re not editing video directly off the drive, then it doesn’t really matter how slow RAID 1 is if you’re using it primarily for backups. 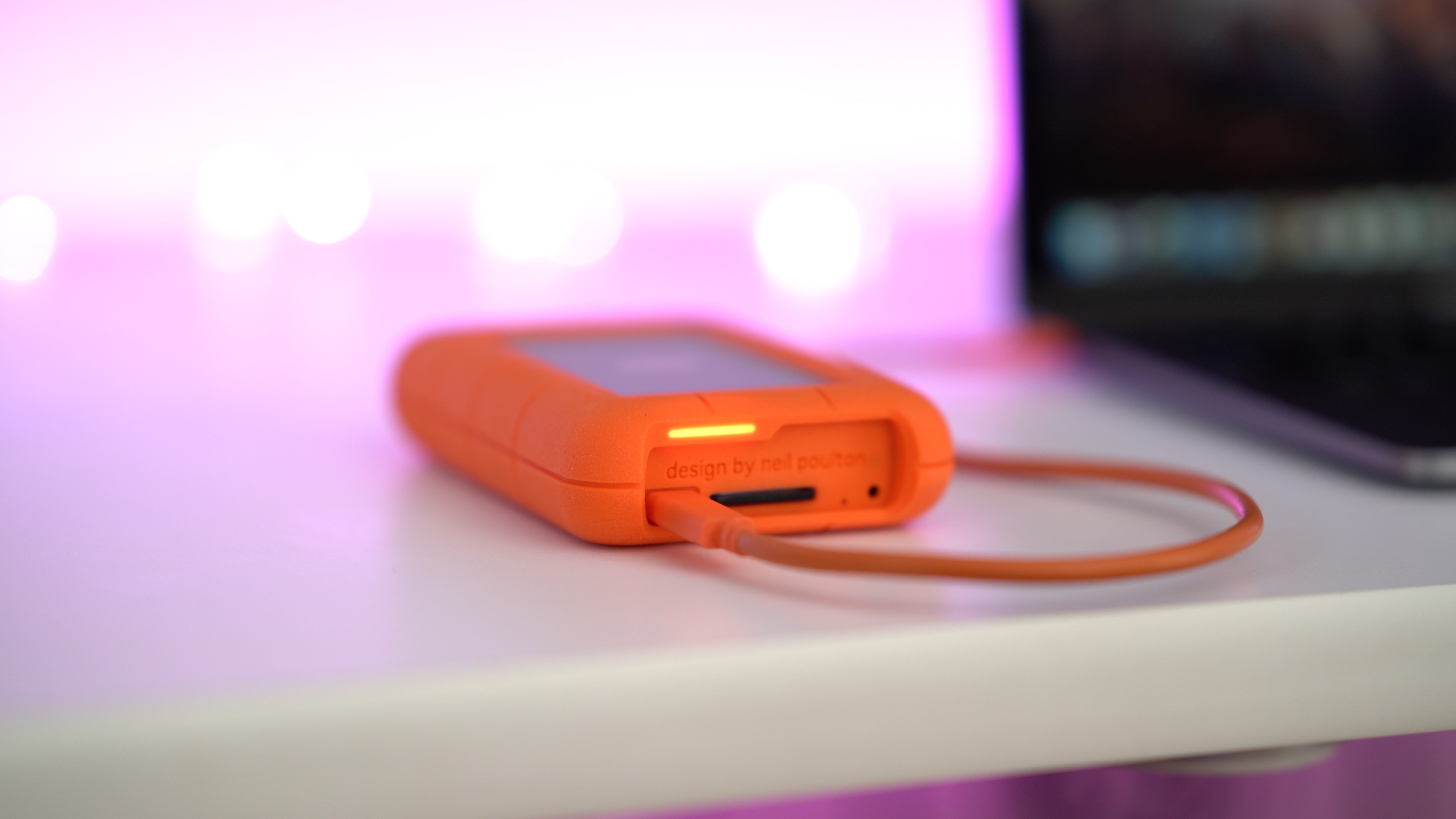 If you’re a MacBook user, then the SD Card reader is a great feature, because it eliminates the need to carry around a dedicated SD Card dongle. The SD Card Reader on the Rugged RAID Pro is also UHS-II enabled, allowing for faster data transmission with modern SD Cards like Sony’s G-Series lineup.

The other big appeal of the drive is its sheer ruggedness. Lacie says that the Rugged RAID Pro can withstand being run over by a 1-ton car, and is protected from limited dust ingress and water spray from any direction. If you’re a photographer or videographer that’s constantly out shooting in the elements, then the Lacie Rugged RAID Pro, available from B&H and from Amazon, may be a viable solution for your workflow. 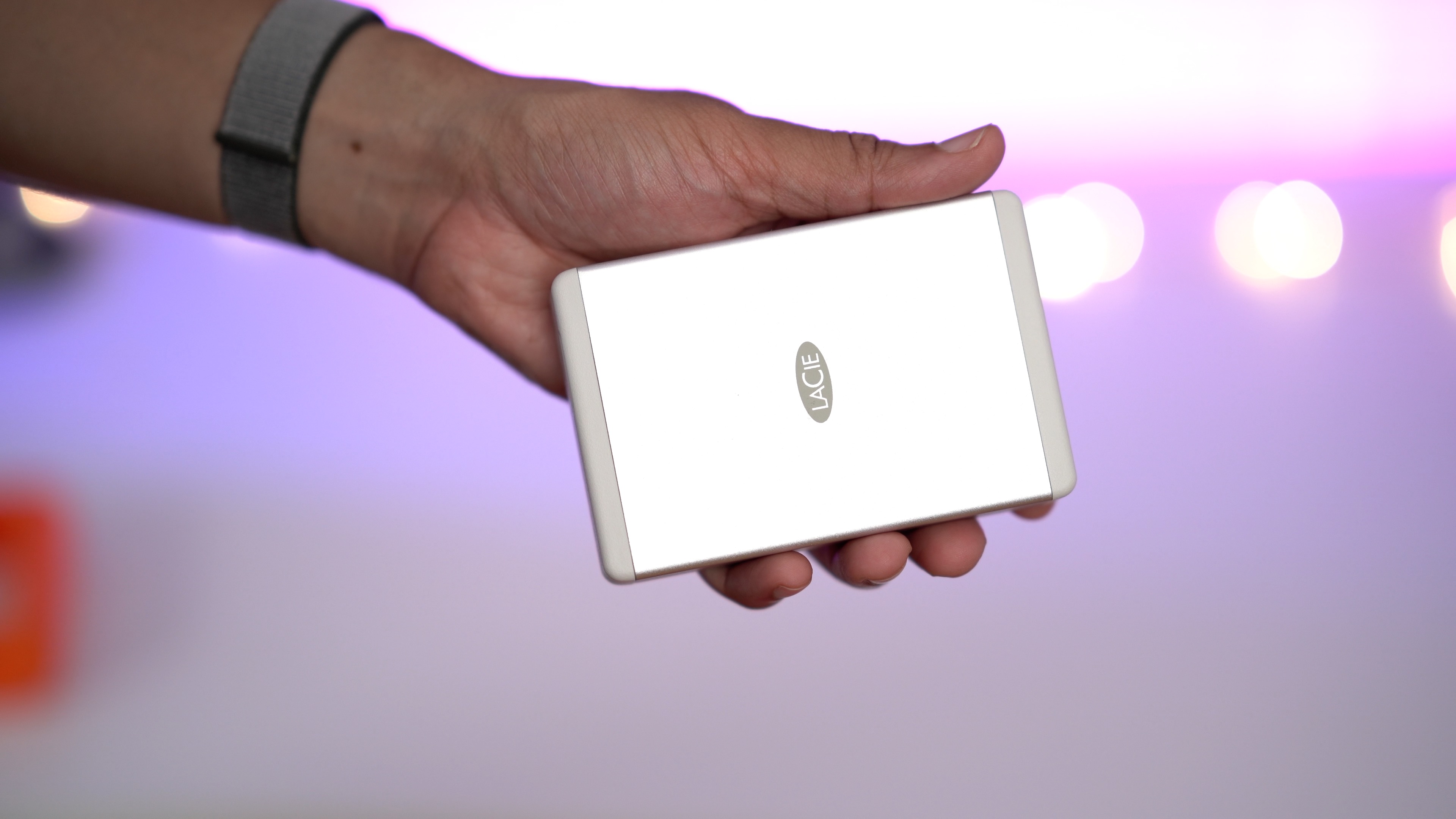 The main downside of the Rugged RAID, besides the obvious fact that it’s still using two spinning mechanical disks, is that the Toolkit software aimed at automating the SD Card backup process can be slow and finicky. You’d be better off manually managing SD Card backups instead of trying to rely on the automated software. 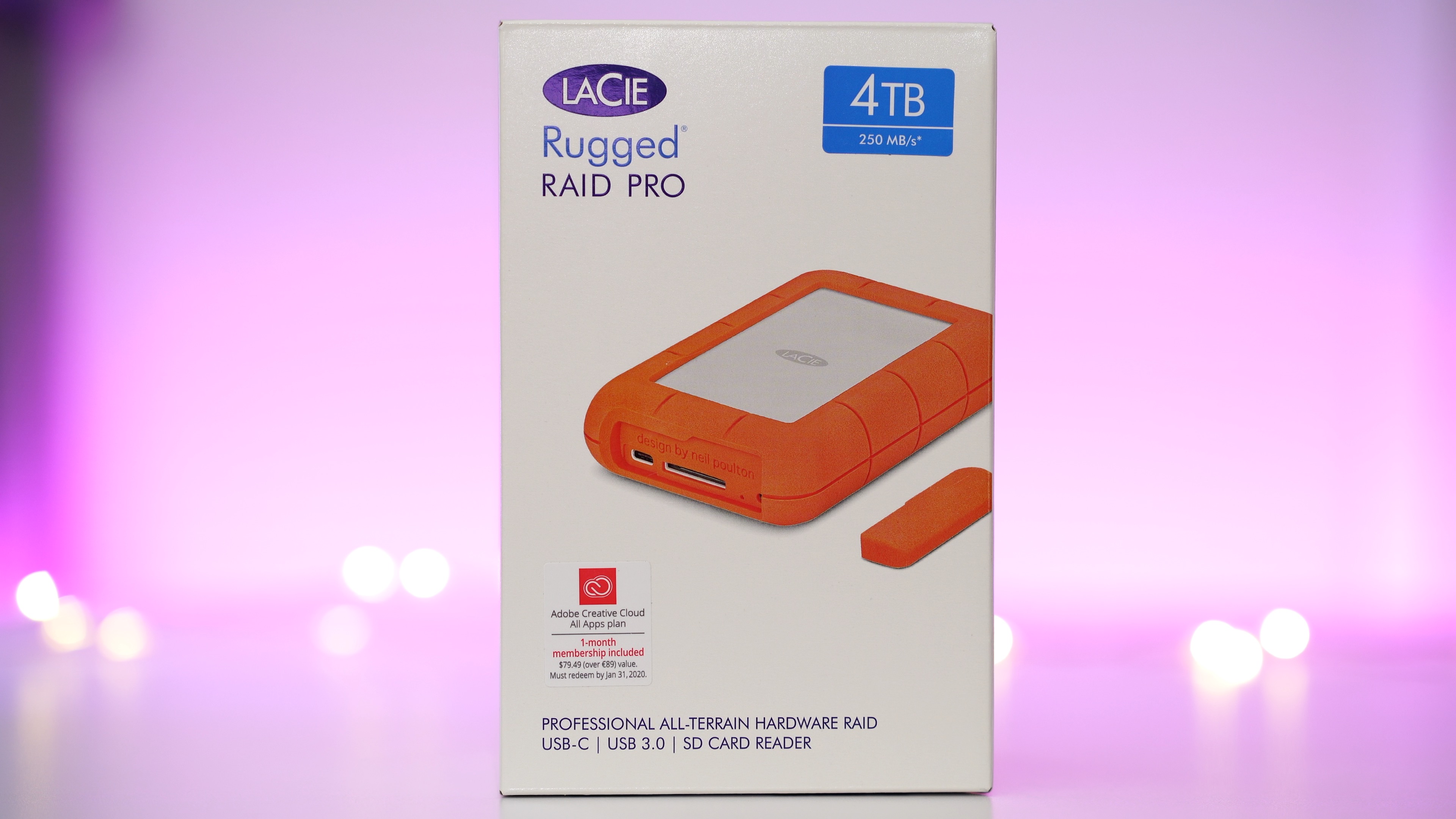 In a world of speedy external SSDs, the Rugged RAID Pro is far from the fastest drive on the block, but it has appealing qualities. Its ruggedness, storage space, and inclusion of a fast SD Card reader are all features that I really like as a video and photo shooter. Does the idea of having a built in SD Card reader on an external USB-C-equipped drive appeal to you? Sound off in the comments with your thoughts.