Emory University researchers have developed a cross-platform mobile app which can test anybody for anemia with just one photo of their fingernails.

Anemia, which is the most common blood disorder in the world, affects nearly 2 billion people, and is caused by a lack of red blood cells or hemoglobin. The report details how patients who previously required an invasive blood test to determine hemoglobin levels, can now simply snap a photo to “analyze color and metadata of fingernail”

We initially targeted anemia, a blood condition characterized by low blood hemoglobin levels that afflicts >2 billion people. Our app estimates hemoglobin levels by analyzing color and metadata of fingernail bed smartphone photos and detects anemia (hemoglobin levels <12.5 g dL−1) with an accuracy of ±2.4 g dL−1 and a sensitivity of 97% 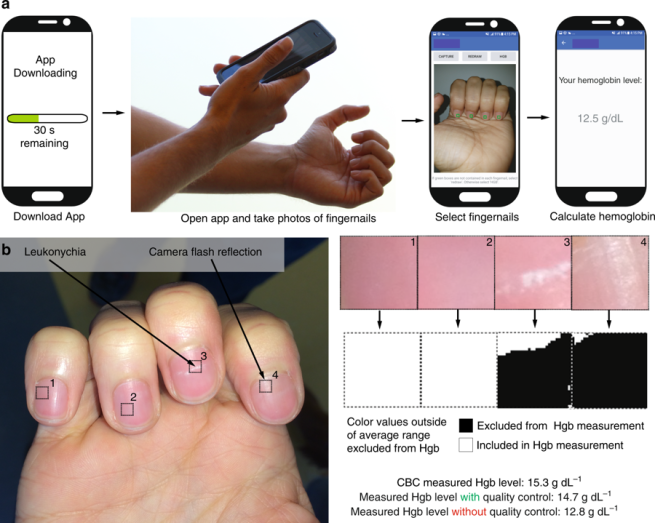 While these technical numbers are only easily interpreted by a knowledgable medical professional, gaining some insight on how the app’s accuracy was verified helps clarify its usefulness.

The four-week study involved 337 people with a range of blood conditions, including 72 healthy control subjects. The researchers report that the app outperformed physicians assessing hemoglobin levels from a physical exam—although it’s not as good as a blood test. But it is as good as, or even better than, a number of FDA-approved diagnostic tools on the market today

Concerns regarding Android versus iOS availability can be nipped in the bud too, as the document later states:

What’s important to note here is that this is merely a study and the app is not available to the public. The video above seem promising enough to insinuate that we might all have access to this technology very soon, though. Personally, I think Apple is highly intrigued by technology of this sort, and wouldn’t be surprised to see features like these built natively into iPhones in the future.