An iOS-only video workflow: Surprises, challenges, and hopes for the future 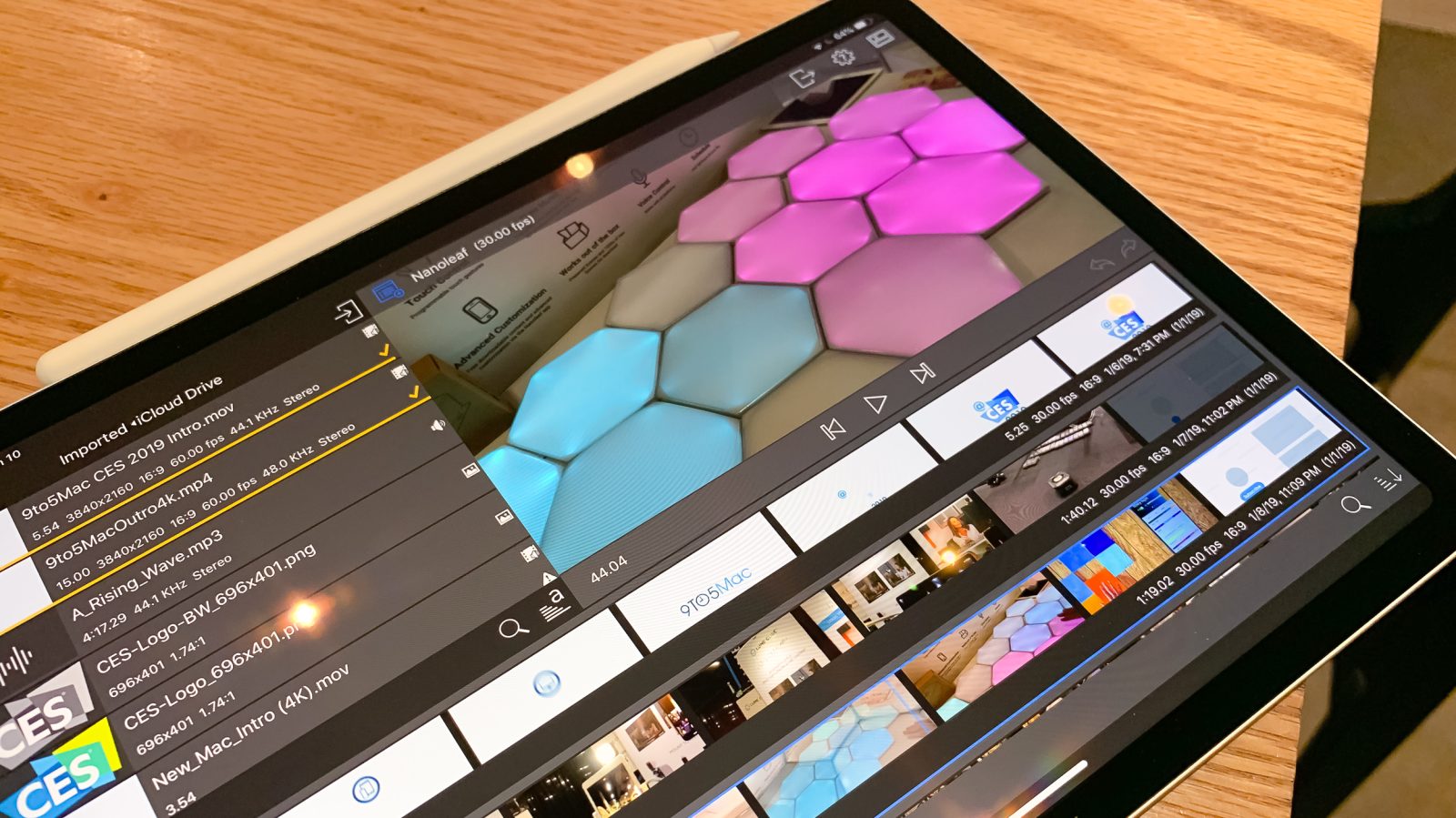 Last week I attended CES in Las Vegas to help bring you 9to5Mac’s coverage of the latest tech products and Apple accessories going into 2019. While hands-on videos are one of the most effective ways to share the news, they can also be the most challenging to create amidst the chaos that is the show floor. This year, I decided to take my video workflow iOS-only and see what I could learn along the way.

Last year was my first time attending CES, so my video strategy was built on the fly as I discovered what does and does not work on the spot. Similar to covering a live event, the less gear you can bring, the faster you can move. Lighting in booths is generally adequate without bringing in backups, but audio is a nightmare.

The iPhone has been my primary still and video camera for years, but last year I still fell back to my MacBook for importing, managing, editing, and exporting all of the media I captured. This year’s setup was pretty simple: 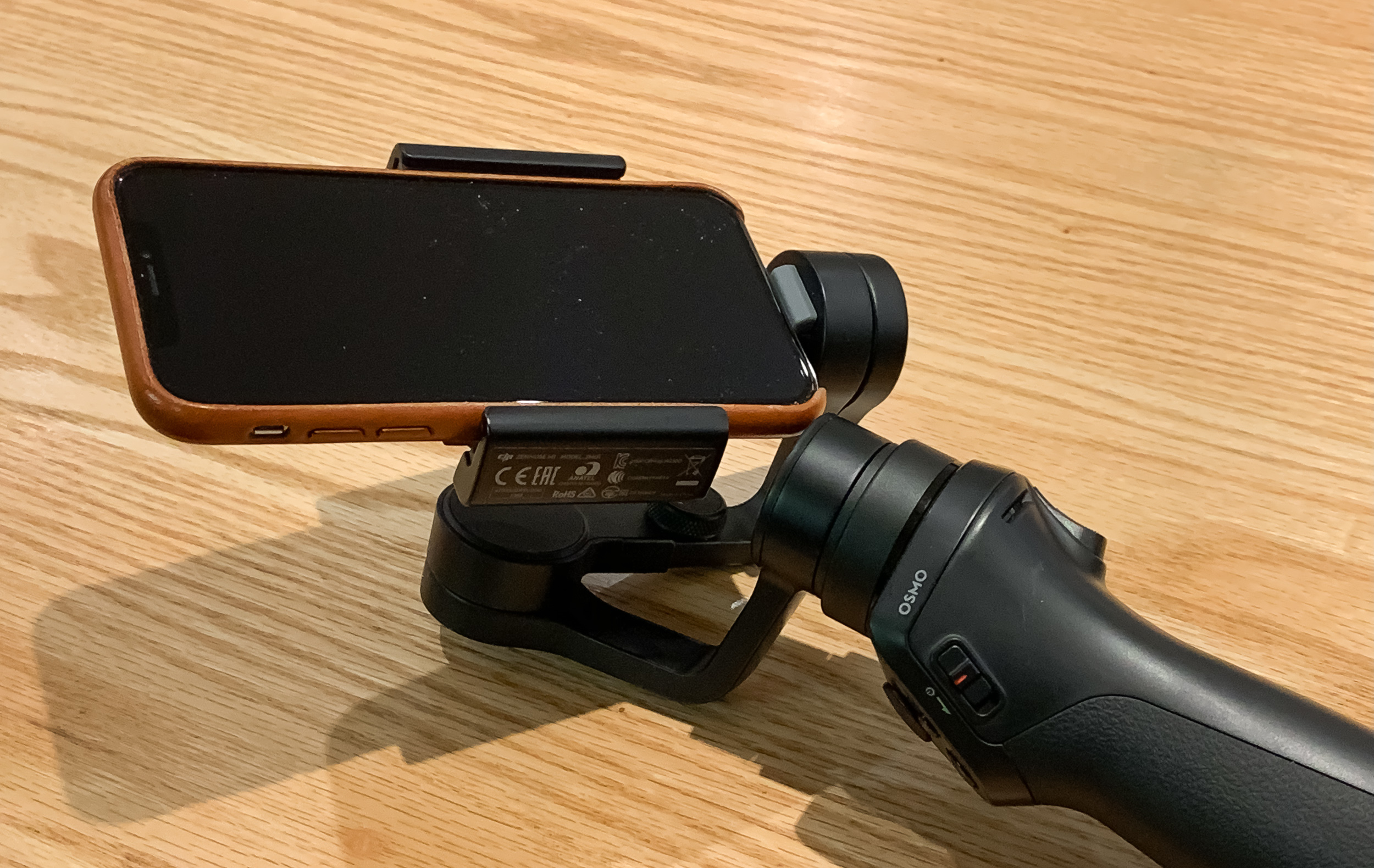 Why did I choose to use an older iPhone X for video when the XS Max would theoretically capture a better shot? The answer comes down to weight. I find that the original DJI Osmo struggles to handle Plus and Max-sized phones, so the iPhone X was a much better fit. I also chose the iOS Camera app over DJI’s custom app because it’s quicker to get in and just start filming. Representatives at booths have their attention pulled in all directions, so every second counts.

CES is notoriously noisy, so bringing an external microphone is key for good audio. This complicates the editing process, but is well worth the extra effort. Last year I tested the Zoom iQ7 on the show floor and was so impressed by its results that I brought it along again.

Like with the DJI Osmo, I also chose to use Apple’s Voice Memos app instead of the Zoom HandyRecorder app because of its speed and usability. Last year this was a challenge due to the limitations of Voice Memos, but the app got a massive upgrade with iOS 12 that has dramatically helped my workflow. The new user interface is more straightforward, and the ability to access recently deleted recordings gives me peace of mind. If you haven’t used Voice Memos since iOS 12, I’d recommend giving it another shot. 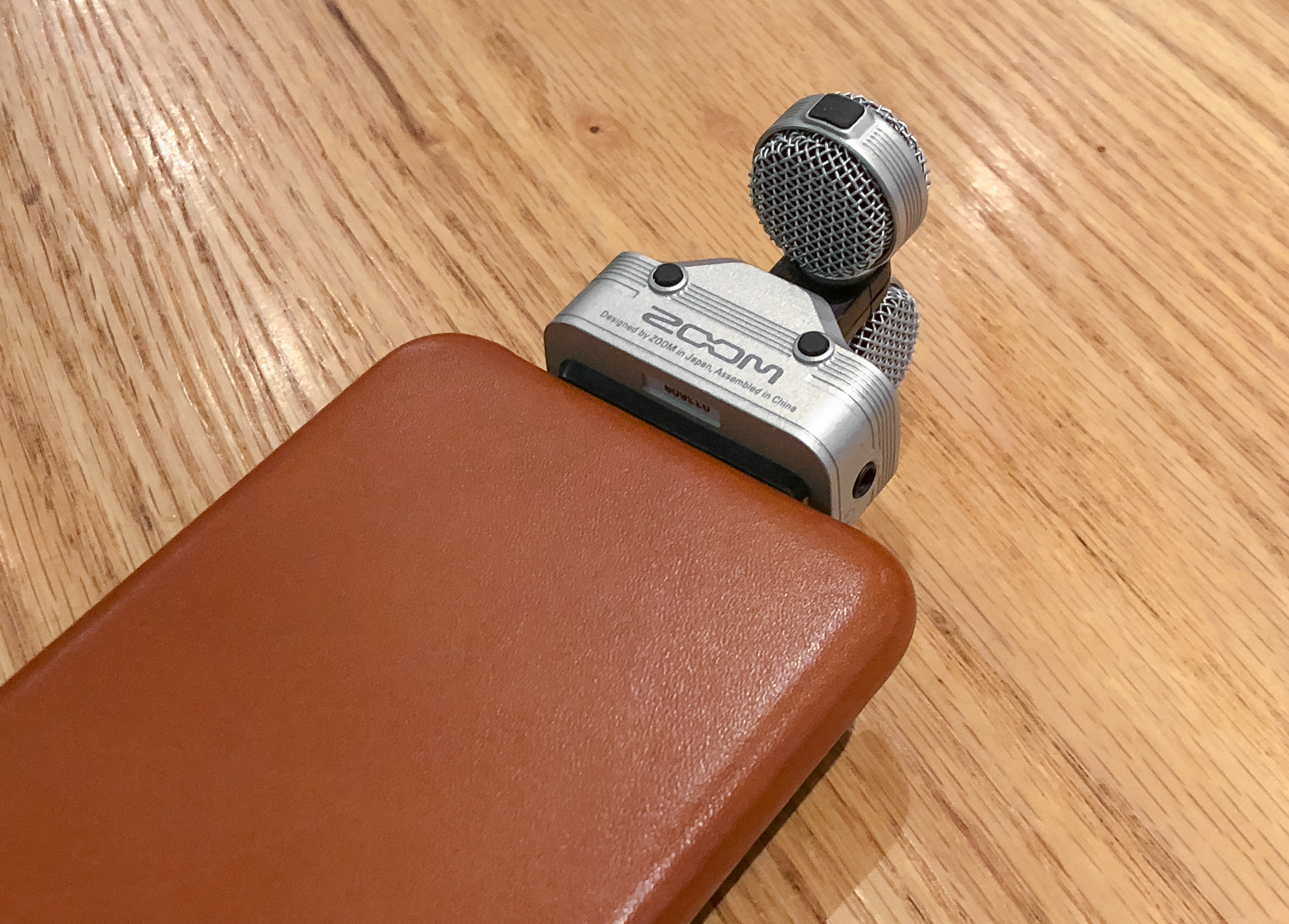 Attaching the iQ7 to a separate iPhone meant that I could individually position my mic near the voice of the demonstrator and my camera near the product. It was also necessary because the DJI Osmo iPhone mount covers the iPhone’s Lightning port. I’d love an iPhone gimbal solution that allows a mic to be easily attached. Since I was a filming and editing crew of one, managing all of these devices simultaneously required sharp focus and some hand acrobatics. But compromising on any one aspect of the gear would’ve led to a noticeably worse final product.

If you’re familiar with iMovie or Final Cut, you’ll probably be right at home in LumaFusion after a few minutes of experimentation. Aside from some iOS-specific UI optimizations, the app works much like you’d expect from a standard desktop editor. LumaFusion won’t be winning any design awards, but it’s by far the most powerful video editor for iPad. With a more visually pleasing interface, it would truly feel like Final Cut for iOS.

I prepped my editing environment before leaving home by importing my CES video assets from iCloud Drive and setting up a template project filled with the 9to5 intro animation. Since internet speeds are unpredictable at CES, I wanted to make sure all the files I could need were local. 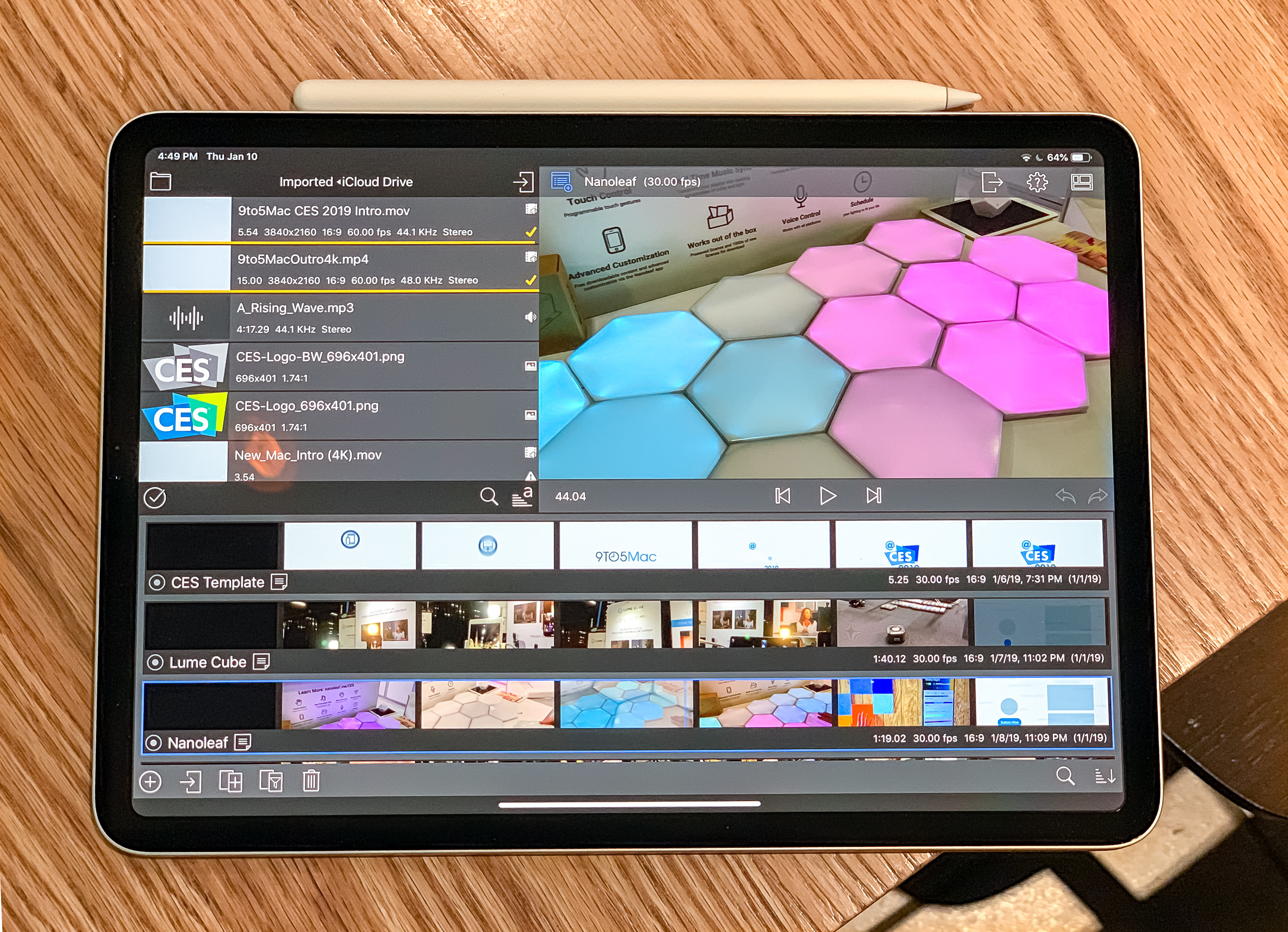 After capturing my video clips and voice memos, I brought the files over to my iPad simply using AirDrop. The speed and ease of wireless transfer enabled me to finish importing my media while taking a breather during CES Unveiled to meet up with the 9to5Google team. I was ready to edit the minute I returned to my hotel room.

As great as AirDrop is, I still ran into frustrations. Sometimes my other devices failed to appear as nearby options to share with, and file transfers unexpectedly stalled. These bugs are frustrating because there is no obvious way to troubleshoot them. Asset management on iOS is also still a weak point for the iPad. I’m far from the first person to point it out, but it’s a fact worth repeating. While assembling my actual video timeline in LumaFusion was a breeze, collecting all of the files I needed felt much less efficient than using my MacBook. Had my projects been more complex, this could’ve become a serious bottleneck.

One of the features in LumaFusion that impressed me most was its smooth playback. My 12-inch MacBook struggles to play exported 4K video clips without dropping frames and can’t play video timelines smoothly in Adobe Premiere even when using low-res proxy files. Yet, my iPad Pro was able to flawlessly preview video clips with effects applied in real-time. This is a game changer for me. The iPad Pro also bested my Mac in export times. Last year I sweated the clock waiting for time-sensitive videos to finish rendering on my MacBook. My iPad was able to tear through similar projects in just a couple of minutes. 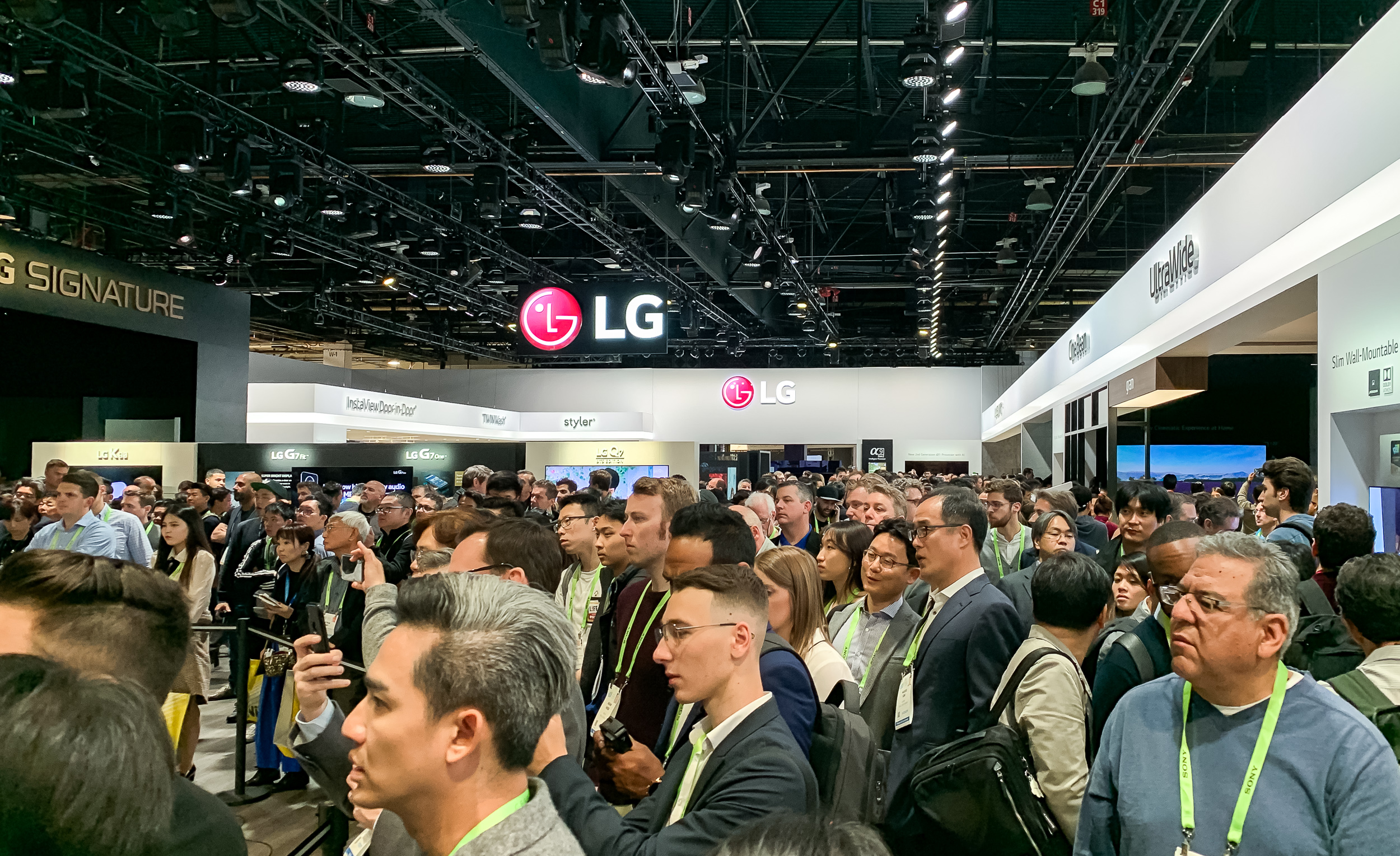 After my videos were finished, I have to admit that I moved the rendered files over to my MacBook for uploading to YouTube. This was less out of necessity and more to save myself the expense of the pay-per-device Wi-Fi connections that Las Vegas loves. Consolidating my internet usage to LTE on my iPhone and Wi-Fi on my Mac helped cut down on expenses.

With another CES in the books, I can say with confidence that switching to an iOS-only video workflow for simple projects greatly improved my productivity and helped complete time-sensitive edits without a hitch. Less waiting for rendering, less fumbling with cables, and lighter gear all meant more time on the show floor. I wouldn’t return to CES without my iPad.