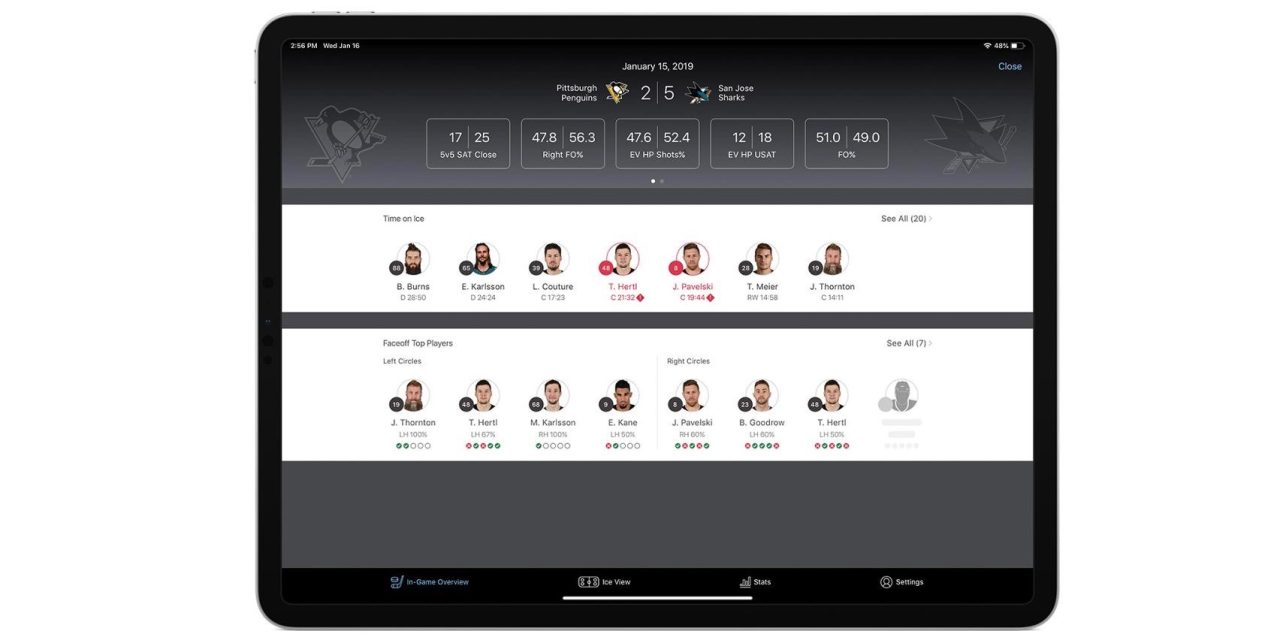 The NHL has today announced that its teams will begin using iPad Pros with a new app designed by itself, SAP, and Apple to help coaches with the large amounts of data that is involved with the sport. The SAP/NHL Coaching Insights app will offer 60 real-time stats for individual players and teams.

The NHL made the announcement today in a blog post:

NHL coaches will soon have access to more than 60 different real-time individual and team statistics on iPads positioned on the bench during games through an app developed by the League, SAP and Apple.

Back in 2017, the NHL partnered with Apple to stock its playoff arenas with Mac and iPad Pros. Today’s announcements notes that each team’s bench includes 3 iPads for real-time video.

The SAP/NHL Coaching Insights App for iPad will serve as a complement to the three iPads already on the bench that provide coaches with real-time video. The app is expected to debut League-wide after the All-Star break. A set rollout date has not been finalized yet.

There will be another iPad Pro on each bench specifically for the new Coaching Insights App.

The app is designed for coaches only. There will be one iPad Pro on the bench at every game and one for every video coach in the NHL. The iPad Pros, which will put the real-time information at coaches’ fingertips thanks to its easy-to-use multi-touch interface and portability, will be managed and stored by the League, but each team will have its own account and the NHL will not have access to the customization of the stats by each team.

Apple started its partnership with SAP back in 2017 to offer an enterprise-focused iOS SDK. NHL’s SVP, David Lehanski, explained more about why the custom app stands to offer a lot of value to coaches:

“There’s a lot of information out there, but coaches are still writing it down on pieces of paper,” NHL senior vice president, business development and innovation David Lehanski said. “They’re not using it the way that they could use it because there really hasn’t been a platform that will allow them to do it easily and efficiently and to quickly customize it to see what they want to see. We’re also doing it because we’re setting a foundation so that when puck and player tracking is fully live, now we’ve got the video, the stats and analytics app, and we can start pouring in the data to mesh with it so we have a true real time system.”

Here are some of the stats coaches will have at their fingertips in real-time:

A deeper dive into the app will give the coaches access to an array of team and player statistics, including shot attempts, unblocked shot attempts, chances for and against, and success rate on shootouts with forehanded shots and backhanded shots, a potentially useful tool for goalies too.

The new iPad Pros and custom app should “debut League-wide after the All-Star break.”