Feature Request: Here’s my wish-list for a standalone Music app on the Mac 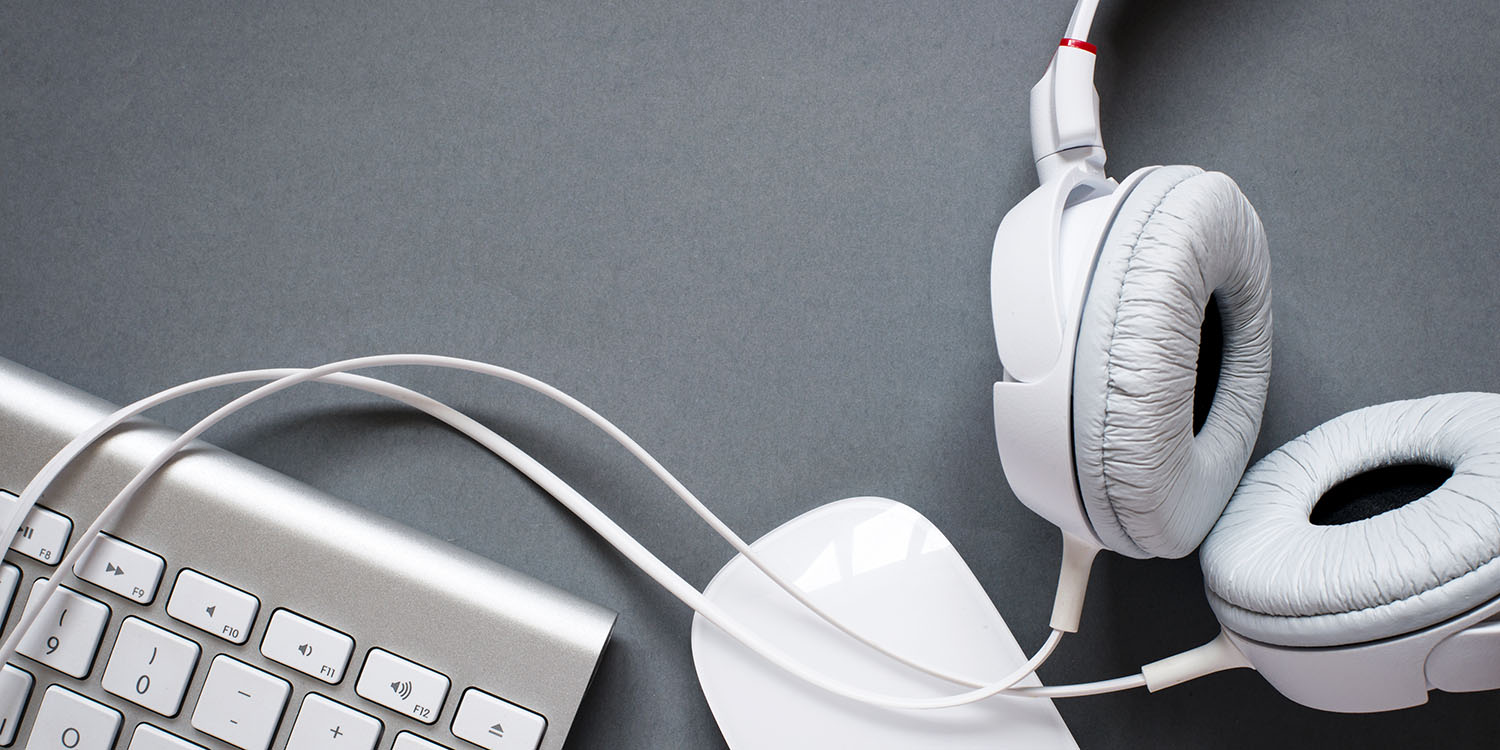 We’ve today been able to confirm that Apple is bringing new standalone media apps to macOS, including a Music app on the Mac.

That’s something I’ve been calling for since 2015.

Let’s have a new OS X Music app just like we got a new iOS one. Have it be a music player, and a means of transferring music to iOS devices, and nothing else. Strip away absolutely everything that isn’t about music.

I gave an exec summary of what I wanted from it back then, but now we know it’s finally happening, I thought I’d put together a more detailed wish-list for the upcoming app …

Here’s what I said before.

Fix all the bugs. Replace the obtuse error messages with helpful ones that tell you how to resolve the issue (but only where you can’t stop the problem from occurring in the first place). Provide high-res album art. Fix the genres.

Let users have any mix of local and streamed music they choose, and lose the two-step transfer process for local music – when you drag music to a device, copy it there, immediately. In short, make an OS X Music app that Just Works.

I spend a lot of time listening to music, and thus a lot of time looking at iTunes. Most of the tabs – For You, Browse, Radio and Store – are now quite pretty, mirroring the appearance of the iOS Music app. However, the Library app, where I select my own music, has hardly changed at all from earlier versions of iTunes. Visually, it looks like a completely different app.

So that’s the first thing I’d like Apple to fix. Just give it a visually pleasing appearance. This ought to be app design 101 for Apple, but not in this case.

I mean, seriously, Apple, has any visual designer in the company even seen this tab? 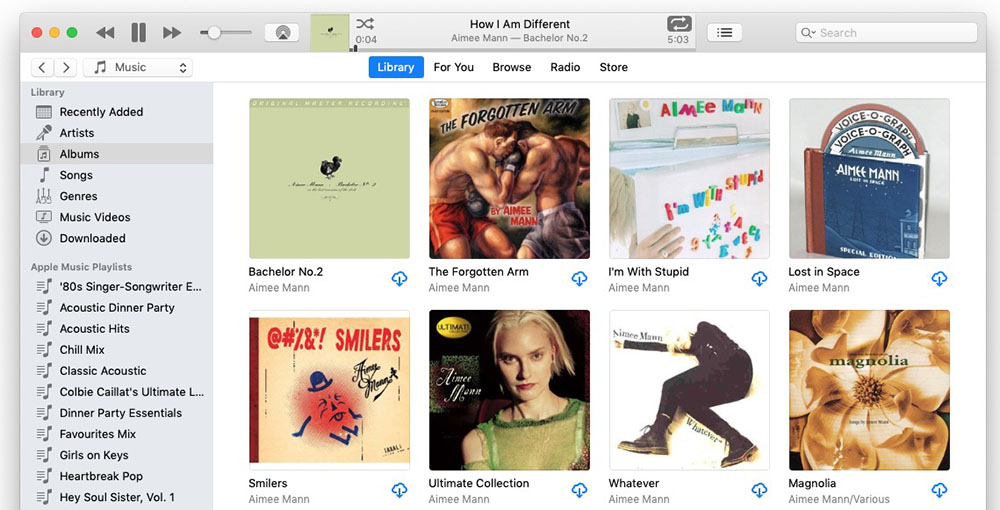 As a subset of this, as mentioned above, let’s have hi-res album art. I’d love to just have the album art full-screen on my Mac when I’m using it purely as a music player – which I do a lot as I prefer the large-screen experience when browsing music.

Ok, this is back-end database rather than app, but it presents to users through the app, so I’m including it here.

Apple’s music metadata is an unholy mess. I mean, try a google search for ‘itunes genres’ then type a space and take a look at the top autocomplete entries.

Apple seems to have used a random genre generator when assigning them to albums. The same artist, from the same period, singing the same style could be classified in three or more different genres. Here’s Kirk McElhearn on a Sinatra album, for example.

The way the album is listed by genre is interesting. There is no reason why certain songs are in any of these genres. If you navigate your iTunes library by genre, you’ll have a lot of trouble. These are the genres for the various songs in this album:

Apple makes a huge deal of Apple Music’s human curation; could we please have some of that expertise brought to genres?

And how difficult is it to assign songs to the correct album? Yes, I understand that sometimes the same song appears on more than one album, and sometimes it’s the same version and other times it’s a different version. But when I buy an album from iTunes, you might think the metadata would show the same album for each song. You might think that, but in many cases, you’d be wrong.

I could bore for England on all the things wrong with Apple’s music metadata, and have occasionally done so, so I’ll leave it at that. Fix the metadata. Please.

I get that album liner notes are a niche interest, and that some artists choose to offer them, others don’t. But … human curation, right?

Apple has editor’s notes for some albums, but not for most. Let’s at least have some standard text for artists, and ideally let’s have some album-specific info, for everything. 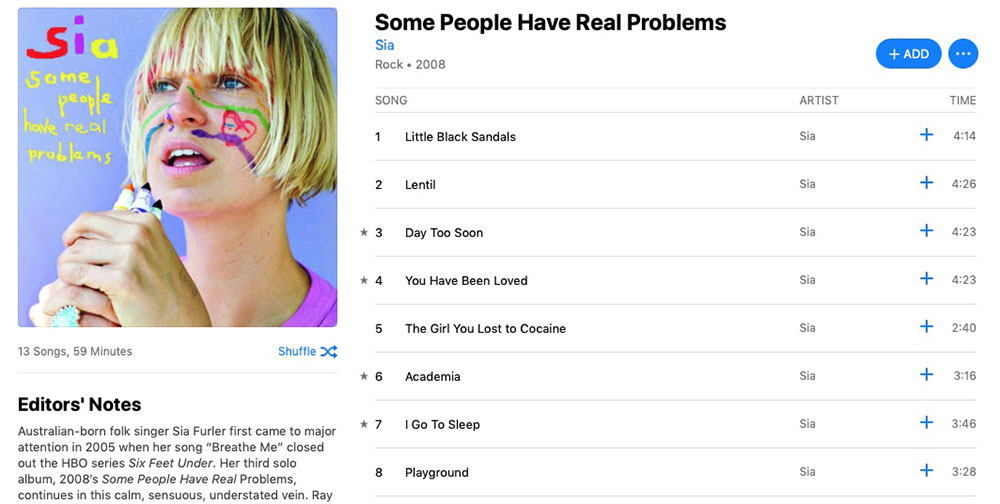 For my own playlists, I can create folders in which to categorise them. Either manual folders, or smart folders. Just right-click in the left-hand pane, create your folder and organize your playlists in any way you choose.

But Apple Music playlists? Nope. No folder options. No smart folders. No dumb ones either. I just get a great long list, in alphabetic order.

To me, the lyrics are what give a song meaning. They provide glimpses into the most important parts of a songwriter’s life. They can provide a new perspective on our own experiences. Lyrics can enable a musician to share their most intensely personal experiences at one end of the scale, and to help create a movement for political change at the other. They have even been analysed to give a sense of what a country cares about.

I know it’s a self-selecting sample, as those who care about lyrics are much more likely to read a piece about them, but the poll at least shows I’m not alone in my views.

And please allow us to make them more visible. Clicking the Up Next button then going to the Lyrics tab and viewing them in a small pane is terrible UI. For those of us who care about lyrics, let’s have the option to prominently display them by default.

Yes, I understand that Apple thinks we all live in an always-connected world where everything is available to stream on demand. But, newsflash, some people don’t.

Some people fly on planes. Travel on London Underground. Visit rural areas. Have carrier plans with data caps. And so on and on and on.

I like to have a good stock of my favorite music on my iPhone, and the large screen makes it massively more efficient to do the selection process on my Mac. Or it would if Apple offered a sensible way to do it.

Here’s how I’d do it. Let me right-click on any playlist or album in the new Mac Music app and select ‘Send to iPhone.’ Bang. Done.

I could go on, but those would be the top items on my wish-list for a standalone Music app on the Mac. How about yours? Let us know in the comments what you think of my wish-list items, and what else you’d have on yours.