Opinion: iTunes is now so clunky the only safe solution is to nuke it from orbit

I’ve complained before about the massive missed opportunity of Apple failing to properly integrate both owned and streamed music within iTunes. I got over that enough to use and enjoy Apple Music, and I’m confident I’ll be continuing my subscription once Apple starts charging my card, despite the raw deal we get on pricing in the UK.

But I also agreed with Variety that Apple needed to adopt the same approach for OS X as it does for iOS, splitting out the various iTunes functions into separate apps. Having now been using version 12.2 of iTunes for a month, I’m escalating this from a moderate whinge to a full-scale rant. The time has come for Apple to finally rid us of this creaking, bloated disaster of an app, and start afresh …

Don’t misunderstand me: I happen to rather like iTunes as a music player. I like the ability to view my music as albums, artists and songs. Visually, the way albums open out into color-matched track listings is attractive.

I like the user-interface of the Now Playing list. It’s easy to add entire albums or individual tracks, and simple to reorder them. I like the ability to pick a single track and, in one two-finger tap, tell iTunes to play that next before continuing with the tracks already in the queue.

I like Smart Playlists. The breathtaking number of options available for user-created Smart Playlists is incredibly powerful – and can be a great way to resurface music you haven’t listened to for a long time.

I love Genius: my usual way to listen to my own music is to pick a track, create a Genius playlist and play that. Usually I delete these after playing them, but keep the ones I like. Genius can be a little repetitive – a number of different tracks generate very similar playlists – but it’s still my favorite feature.

Of course, iTunes isn’t perfect, even as a music player. I like album art, and when an album is playing I like to display the cover using the Cover Version visualizer. But Apple’s cover art graphics are so low-resolution they are horribly pixellated:

The Genre view is also a disaster, as it virtually has one category per album. But, in the main, it’s a very good music player.

But it’s a different matter where other media is concerned. Where are podcasts, for example? Where are audiobooks? Ok, we’re techies, we know that if we can’t see something in a visible menu, it’ll be hidden inside that ‘…’ icon, but we’re not short of space in the menu bar here, so why do we have Music, Movies and TV Shows visible, but not Podcasts and Audiobooks?

And Apple hasn’t even tried to integrate ye olde Internet Radio with Apple Music Radio – they are in completely different places.

Things get even messier with syncing. Horribly messy. It’s not like syncing was a great experience prior to the launch of Apple Music: despite the fact that I have both iPhone and iPad set to sync via WiFi, both devices randomly appear and disappear from the icon tab. Right now, as I write this, my iPad shows up but my iPhone doesn’t:

If I’d written it last night, it might have been the other way around. Sometimes both devices are there, sometimes one, sometimes the other – it’s just extremely flakey. (Connecting it with a cable generally brings it back… for a while.)

Sometimes music would sync with my devices, sometimes it would simply fail with no clue why. Sometimes a device would disappear from iTunes midway through syncing.

Even when it all worked properly, anyone new to iTunes is going to assume that to copy music to their device, they drag the music to their device and job done. Who, without painful experience of iTunes, would imagine that they need to follow this by switching to the device screen and clicking Sync for it to actually, you know, copy the music? It Just Works certainly does not apply.

But it’s gotten much worse with Apple Music. Sure, I like iTunes Match giving me access to my entire music library via iCloud, and I like Apple Music giving me access to music I don’t own – but that’s no use when I’m sitting on a plane, or in an area with poor data connectivity, so I like to have a decent stash of local music. Since iTunes 12.2, iTunes simply refuses to copy local music to my devices, even with ‘Manually manage music and videos’ checked.

What kind of error message is that anyway? It gives no clue what to do about it. Sure, I’m a geek and I’ve been using Apple products for a long time, so I was able to fix it after only a brief expletive, but how many non-tech users are going to realize that this means they need to open up Settings (not the Music app) on their iPad, scroll down to Music and then flick the iCloud Music Library switch to ‘off’? None at all, that’s how many.

And why on earth can’t I add my own locally-stored music to play whether or not I have a data connection, plus access to Apple Music when I do? It makes no sense at all for this to be an either/or. Especially as I’m pretty sure it let me do this before a hardware failure meant getting my iPad replaced. (Which is another complaint about lack of integration in the Apple ecosystem: since I’m restoring from iCloud Backup, and all my music is on iTunes Match, why doesn’t my music get re-downloaded as part of the restore?)

I haven’t experienced the nightmare Jim Dalrymple described of somehow seeing 4,700 songs disappear, but I have seen small numbers of tracks disappear from my Mac, courtesy of this error message when syncing albums I know are (or were …) on my machine:

Of course, I have multiple backups, but deleting music is still a pretty major screw-up.

Speaking of which, why for the love of all things tech would syncing books remove all music, movies and TV shows? 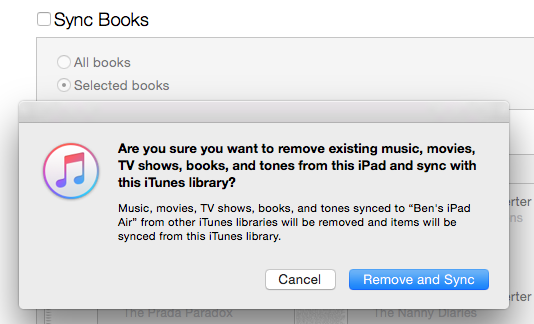 What about photos? iCloud may (eventually) sync photos taken with your iPhone to your iPad and Mac, but what if you want to manually copy across photos taken with a DSLR to your iPad to easily share with friends? Give any of your bright but non-tech friends a folder of photos, an iPad and a copy of iTunes and see if any of them can figure out how to do it without losing their existing synced photos. Hell, try it with some techy ones too.

I could go on, but tl;dr: iTunes is a total mess – about as far from an It Just Works experience as you could possibly get, and an utter embarrassment for a company which prides itself on simple, intuitive user interfaces. It needs to die, and be replaced with individual OS X apps which each do one job, and do it well.

Let’s have a new OS X Music app just like we got a new iOS one. Have it be a music player, and a means of transferring music to iOS devices, and nothing else. Strip away absolutely everything that isn’t about music.

Fix all the bugs. Replace the obtuse error messages with helpful ones that tell you how to resolve the issue (but only where you can’t stop the problem from occurring in the first place). Provide high-res album art. Fix the genres.

Let users have any mix of local and streamed music they choose, and lose the two-step transfer process for local music – when you drag music to a device, copy it there, immediately. In short, make an OS X Music app that Just Works.

We already have iBooks for books, there’s no reason to even see books in iTunes when iBooks can do the syncing perfectly well. Pull out Podcasts into their own app, exactly as per iOS. Ditto Audiobooks, iTunes U, Apps and Tones: give each their own lightweight, totally intuitive app. And, of course, give each a consistent user interface.

When all that is done, collect all the drives containing the iTunes source code, put them on the lawn in front of 1 Infinite Loop and auction off the right to have at ’em with an angle grinder. That would raise way more money for charity than a lunch with Tim Cook.

Do you share my views? Take the poll, and let us know your thoughts in the comments.