After two years, Today at Apple is outgrowing Apple Stores 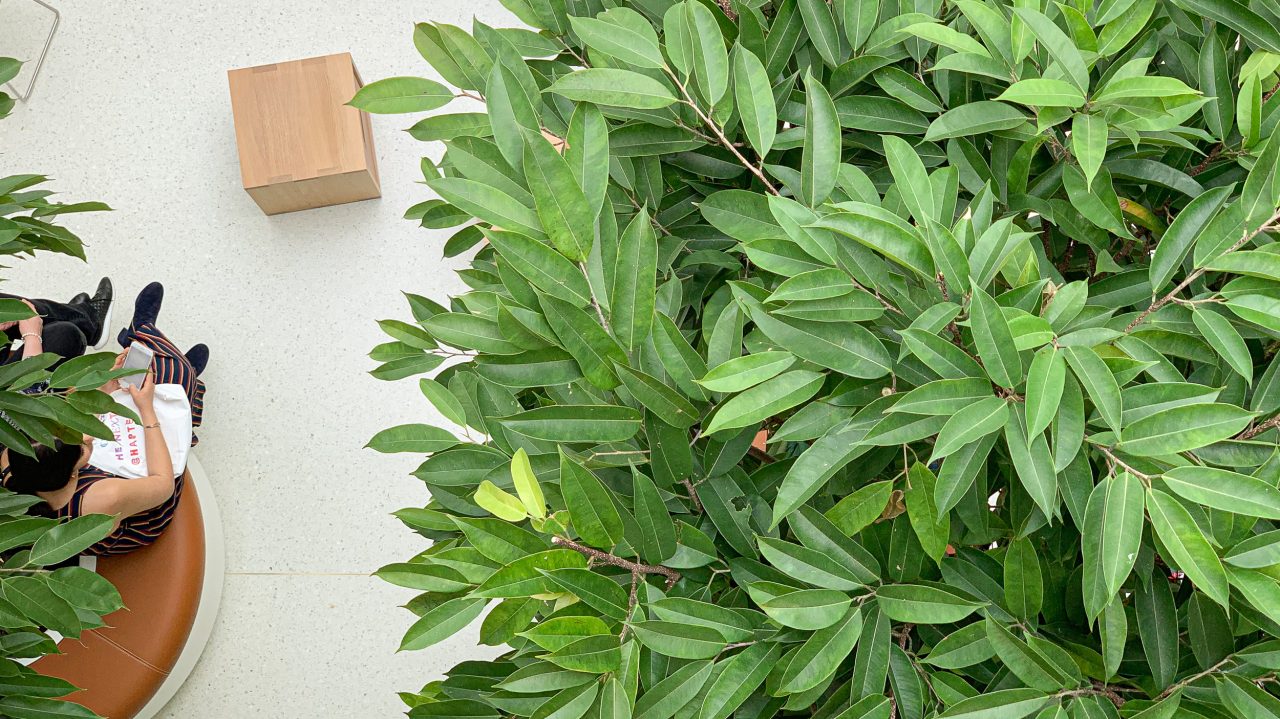 It’s impossible to talk about Apple retail in 2019 without mentioning Today at Apple. The program of creative sessions has become a primary force driving the philosophy, architecture, and organization of all Apple Stores since it was rolled out globally two years ago this week. Those two years have been marked by a maturing session curriculum that has sharpened Today at Apple’s focus and expanded its reach. The program has evolved so much, in fact, that it is beginning to outgrow the stores it was designed for.

When Today at Apple ramped up in 2017, only a handful of stores featured a design tailored for larger events. Most locations were still “classic” stores with a standard Genius Bar. At the time, that didn’t seem like a big deal. Most early sessions worked well around a table, and performances were limited to just a few locations like San Francisco’s Union Square.

While the founding goals of Today at Apple haven’t changed, the scope of sessions has. Community feedback and attendance numbers have shaped the type of content Apple offers. In-depth Labs and Walks that venture outside the store have become more common. New flagship stores often host month-long themed event programs. Awareness of Today at Apple has grown on social media. These changes make each store’s gathering area — the Forum — more important than ever.

From the smallest mall stores to the largest global flagship locations, Apple attempts to offer a nearly identical regular program of sessions. As Today at Apple grows, this puts a strain on the store layout. In mall stores — still the vast majority of Apple’s fleet — the Forum ends up being repurposed as a lounge for support appointments, even when sessions are going on. Customer frustrations around seating, noise, and crowding often stem from these two store functions colliding.

Apple has outgrown suburban malls altogether in the traditional sense. Standard mall stores simply can’t accommodate the layout needed for support and sessions to coexist peacefully. This isn’t a problem solved by opening more locations — it’s a limitation of tenant spaces in malls.

In recent stores where Apple has more architectural freedom and square footage to work with, eagle-eyed observers may note a common design pattern emerging. The Forum is separated from the support area when possible, sometimes by a wall and sometimes on a different floor altogether. This idealized layout embodies the original idea of the Genius Grove as a quieter place for assistance. In turn, it allows the Forum to shine as an event space without the constraints of active appointments. The Forum’s responsibilities will only continue to grow as performances and exclusive sessions become more important to Today at Apple in the future. 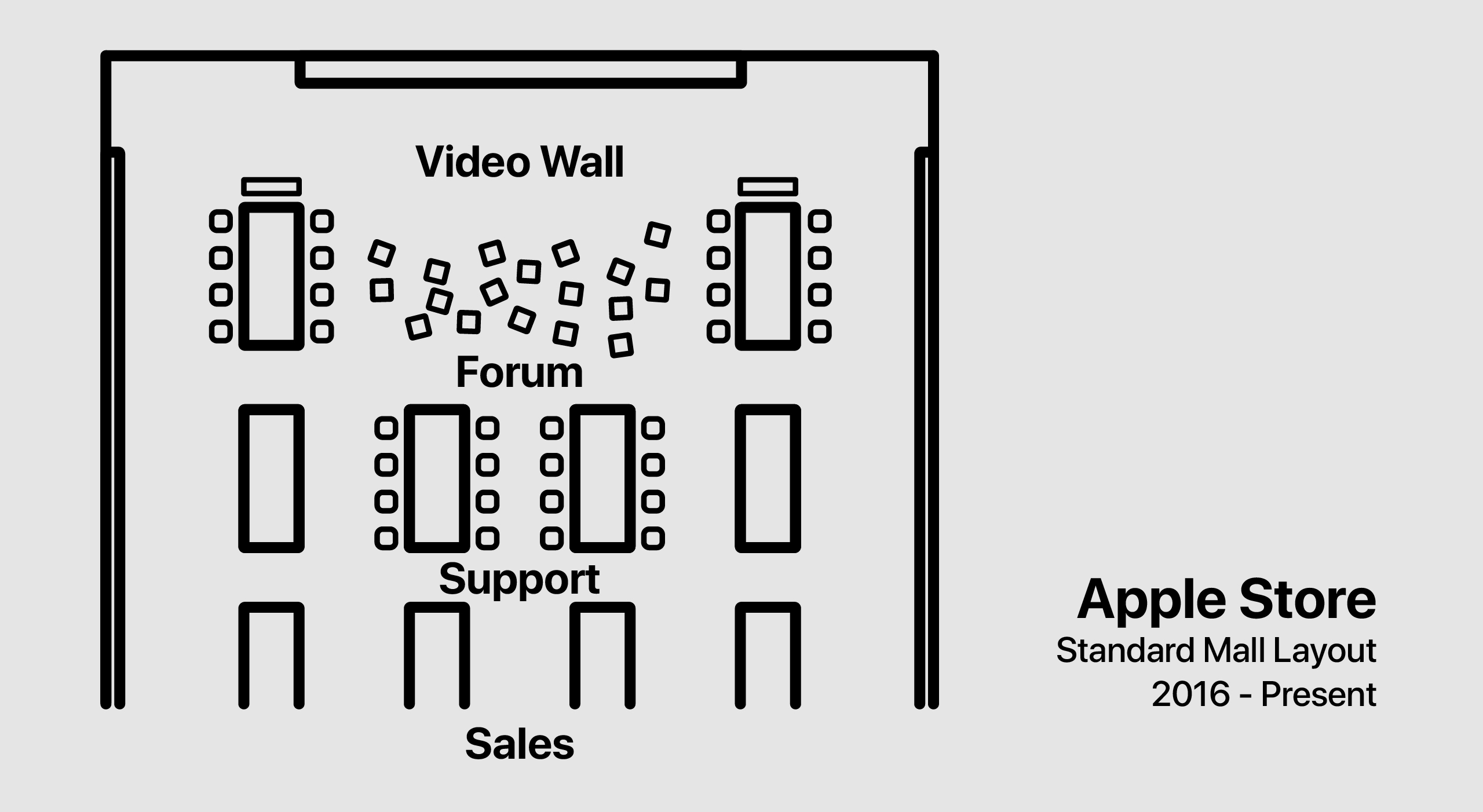 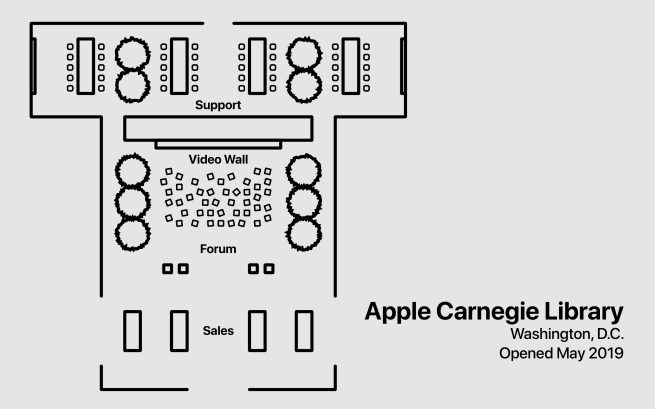 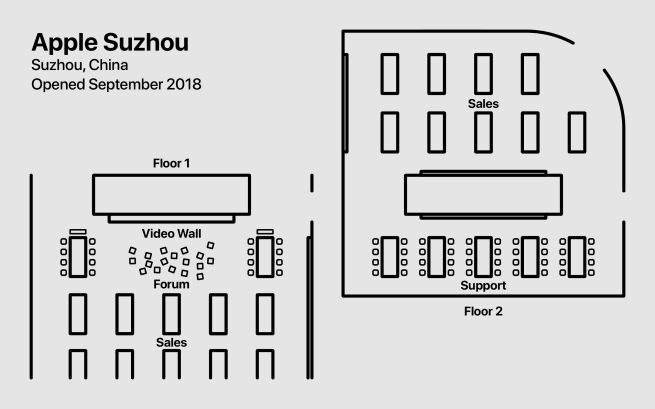 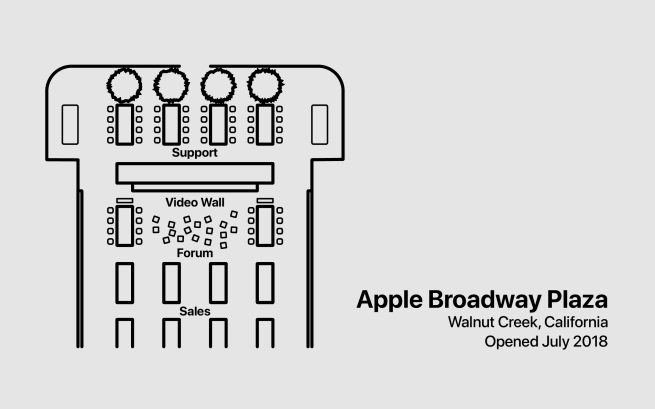 Apple has also run up against the confines of malls in terms of content. Recently added sessions explore topics deeper than creative skills and challenge the thinking of participants. Speakers are directly addressing political, societal, and ethical issues in their sessions. Photo Walks — some of the most engaging activities Today at Apple offers — are best experienced in a vibrant outdoor space. Reaching a session’s full potential in notoriously plain and homogenized shopping malls is a challenge. Today at Apple is only at its best when filled with diversity in perspective. 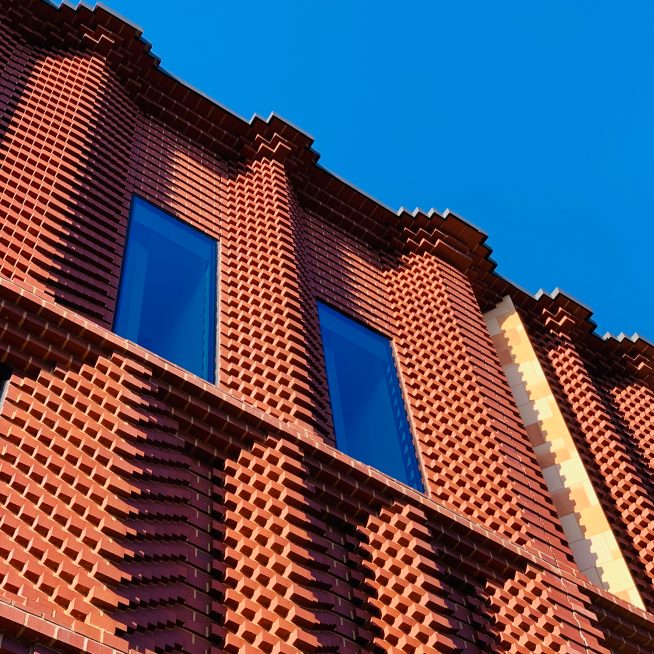 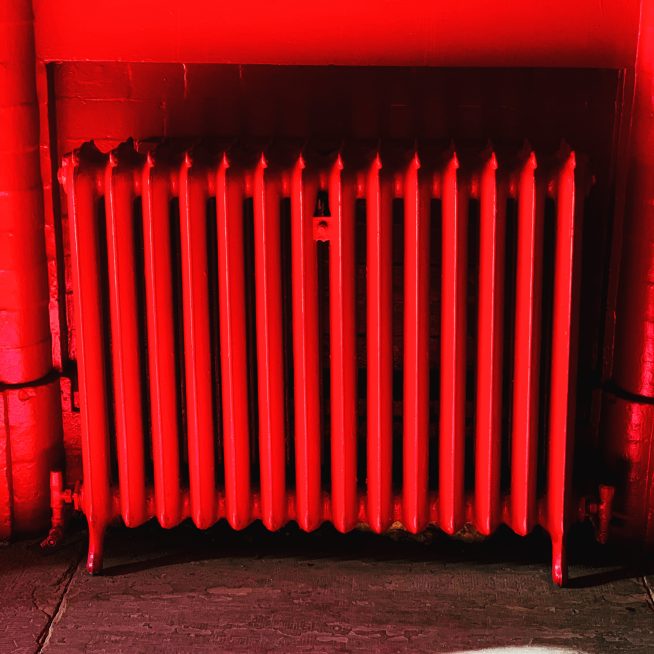 Sessions able to be held beyond malls offer participants a richer experience for photography.

Combined, these factors make Apple’s latest mall store expansions feel functionally inadequate the moment they open their doors. The layouts worked well when sessions were in their infancy, but Today at Apple has graduated. Even more strained are remaining classic store locations where Apple is simply swapping the Genius Bar for a Forum and Video Wall. The changes are undoubtedly an improvement, but they feel more like a stopgap rather than a long-term solution in many cases. 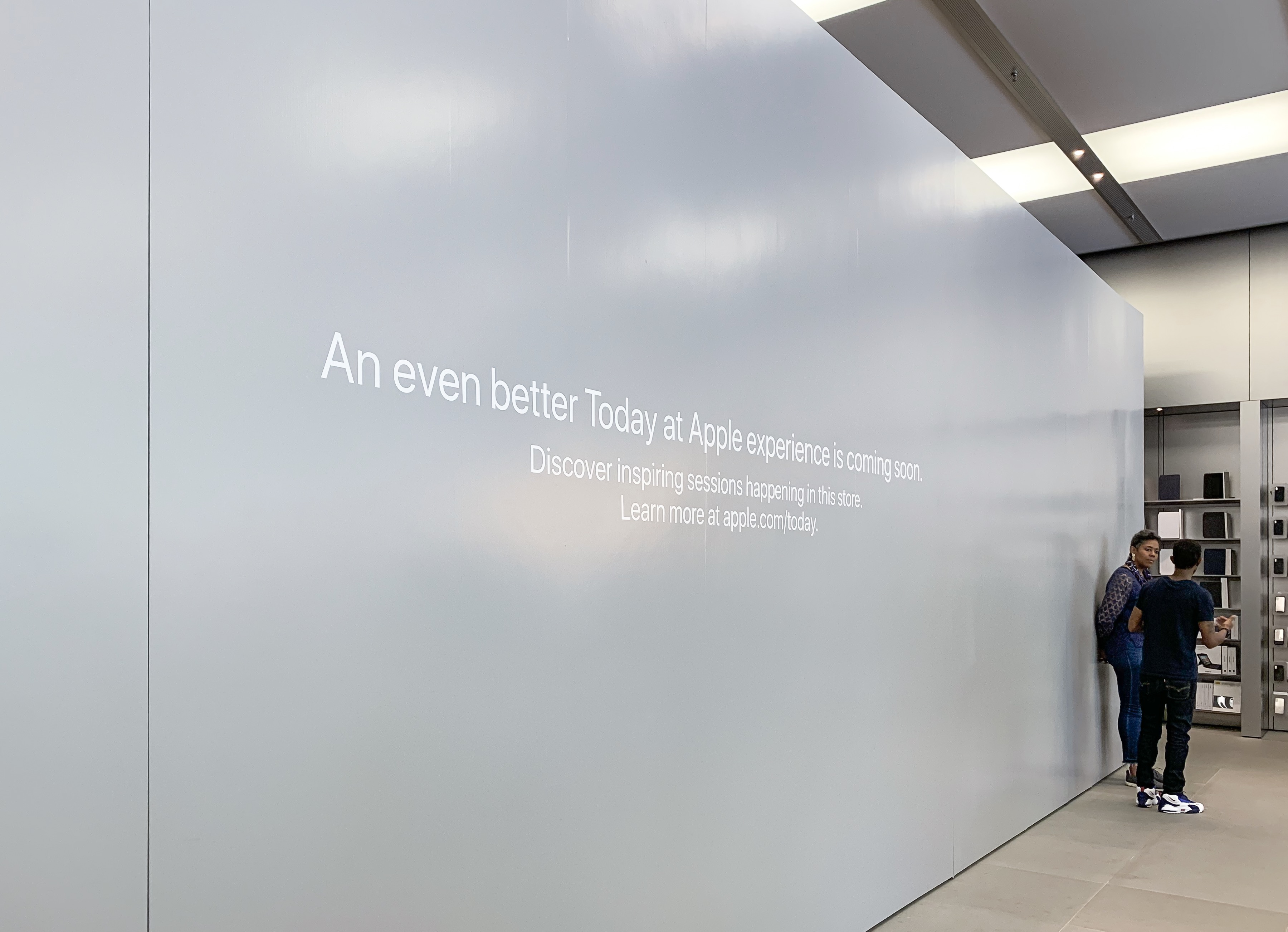 What will allow Today at Apple to flourish? One of the most fascinating developments is a partnership with The Fundació Joan Miró museum in Barcelona. Apple’s Creative Pros received special training to teach sessions outside of stores and at the museum itself. An eight-week program offers a trimmed selection of free courses on art and design. This is a promising start to a strategy that could prove successful on a larger scale.

There are numerous advantages to taking Today at Apple on the road. Moving beyond the store makes sessions more accessible to more people and breaks down the limitations of an undersized space. Apple could partner with museums, parks, and other local institutions to host events in regions not currently served by an Apple Store. There are plenty of customers who would enjoy an illustration lesson but simply can’t travel the distance to a store.

Moving beyond the store also enables vibrant cultural backdrops for photography, art, and history that malls can’t always offer. Limited run session programs would allow Apple to educate in the hearts of public spaces and develop a positive rapport in communities where building a permanent store has proved too divisive. Staffing these sessions with talented Creative Pros is likely one of the largest hurdles.

Today at Apple not at Apple might sound strange, but it’s an idea antithetical only in name. From the start, Apple described the program as “where the best of Apple comes together to connect with one another, discover a new passion, or take their skill to the next level.” Earlier this month, Retail + People leader Deirdre O’Brien noted that sessions weren’t necessarily created with the idea of driving more revenue.

It’s clear that Today at Apple doesn’t require a physical building to fulfill its purpose. The people, ideas, and interactions behind the sessions matter most. As Today at Apple enters year three, it will need to take a creative approach to reach its full potential — just like the program encourages others to do.