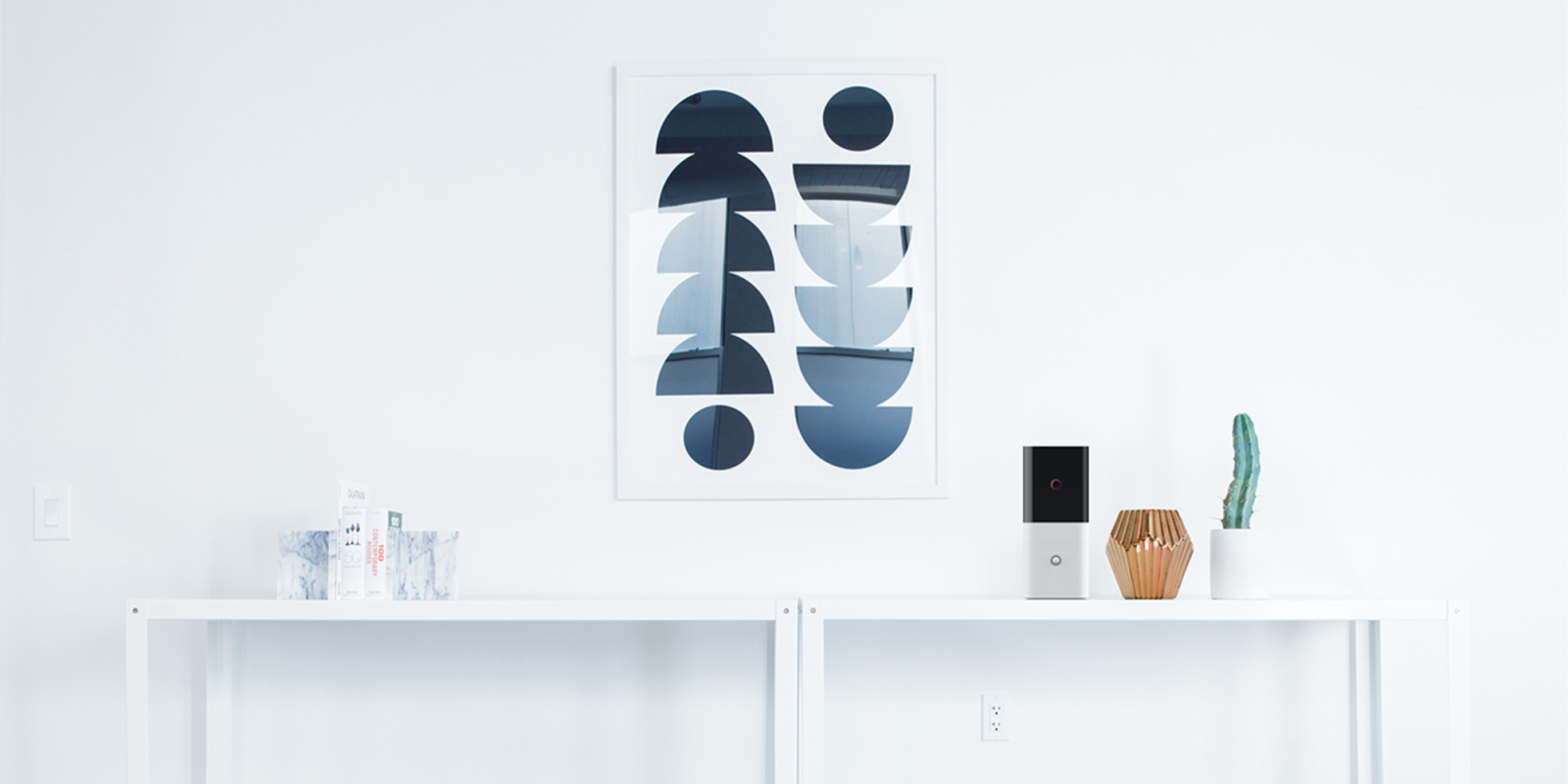 When I was in my early 20s, I worked for an independent telephone company in Ringgold, GA. One of the projects I worked on was building a home and business security product. I ended up working with customers in a sales role after we got the product up and running. I say all that to make that point that I am somewhat of a veteran in the home security industry. I’ve sold hundreds of thousands of dollars of Honeywell alarm systems. I know which systems can be easily monitored by other companies. I know the benefits of wired vs. wireless systems as well. In my current home, the builder had a DSC system installed by a local alarm company that I’ve been using since we moved in back in 2013. Over the years, I’ve upgraded my home to include many smart home aspects. Still, the security system is something I hadn’t touched until I read about the abode system with HomeKit integration. Is abode the best home security system for Apple users? Let’s dig into it my review of the abode iota alarm system.

One of the main differences between the various DIY alarm systems vs. traditional systems is where the devices are mounted and how they communicate. With my existing alarm system, there are door triggers hard wired back to a central panel in my coat closet. The keyboard and motion sensor is also hard-wired. 110V powers everything, and it has a battery backup. The only communication method is a traditional phone line (which I still have for 911 purposes for my kids).

With DIY systems, it’s almost always some sort of wireless technology between the sensors and the base station. Most DIY alarms work off your internet connection and often include a SIM card for cellular backup.

I had been monitoring various alarm systems over the years, like Nest Secure (I have Nest thermostats) and SimpliSafe, but I hadn’t found one that made me want to redo my entire setup completely. Once I read that abode had added HomeKit support to their iota starter kit, I begin to look at very closely.

I recently purchased an August lock, so the ability to automatically disable the alarm when I unlocked the door was very intriguing. After a few days of research, I made my purchase. I chose the abode iota starter kit, added a dedicated keypad, two smoke monitors, three slim door sensors, and an extra motion detector. The iota starter kit includes a base station, a regular door sensor, and one keyfob. The base station consists of a built-in 1080p camera (works with HomeKit) and a built-in motion sensor. The base station works on Wi-Fi (requires ethernet for initial setup), has a cellular backup option, and includes a built-in battery if the power goes out. The extra motion sensor will replace the one in my living room, and I’ll mount the keypad in place of my existing one. 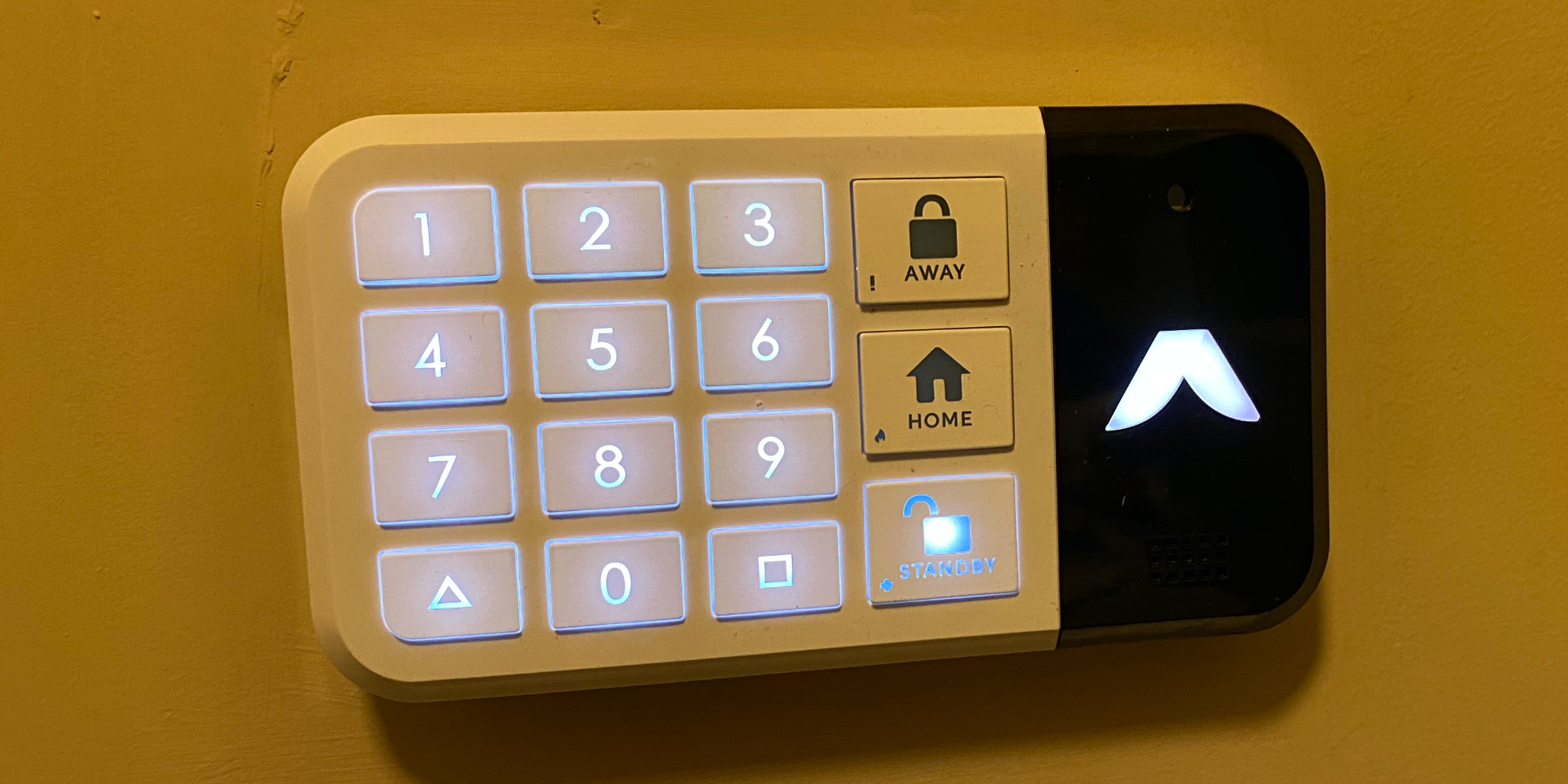 The keypad is pretty unique in that it connects to the wallplate with magnets. This feature makes it easy to mount and remove. It includes a built-in battery and must be charged via Micro USB every six months or so. I am using the keypad a lot less than I initially thought, as I am generally relying on the abode app to arm and disarm the system, but it was on sale, and I would have had to patch the wall otherwise. The app allows you to configure your passcode, add new ones, and delete unused ones.

One aspect of DIY alarm systems that I don’t like is how large the door sensors are. They are generally white bricks that mount near the top of the door. The technology is relatively simple in them, though. One part of the door sensor is a magnet, and another is the actual transmitter. When the door is open, the “seal” is broken, and that sends a signal to the alarm. 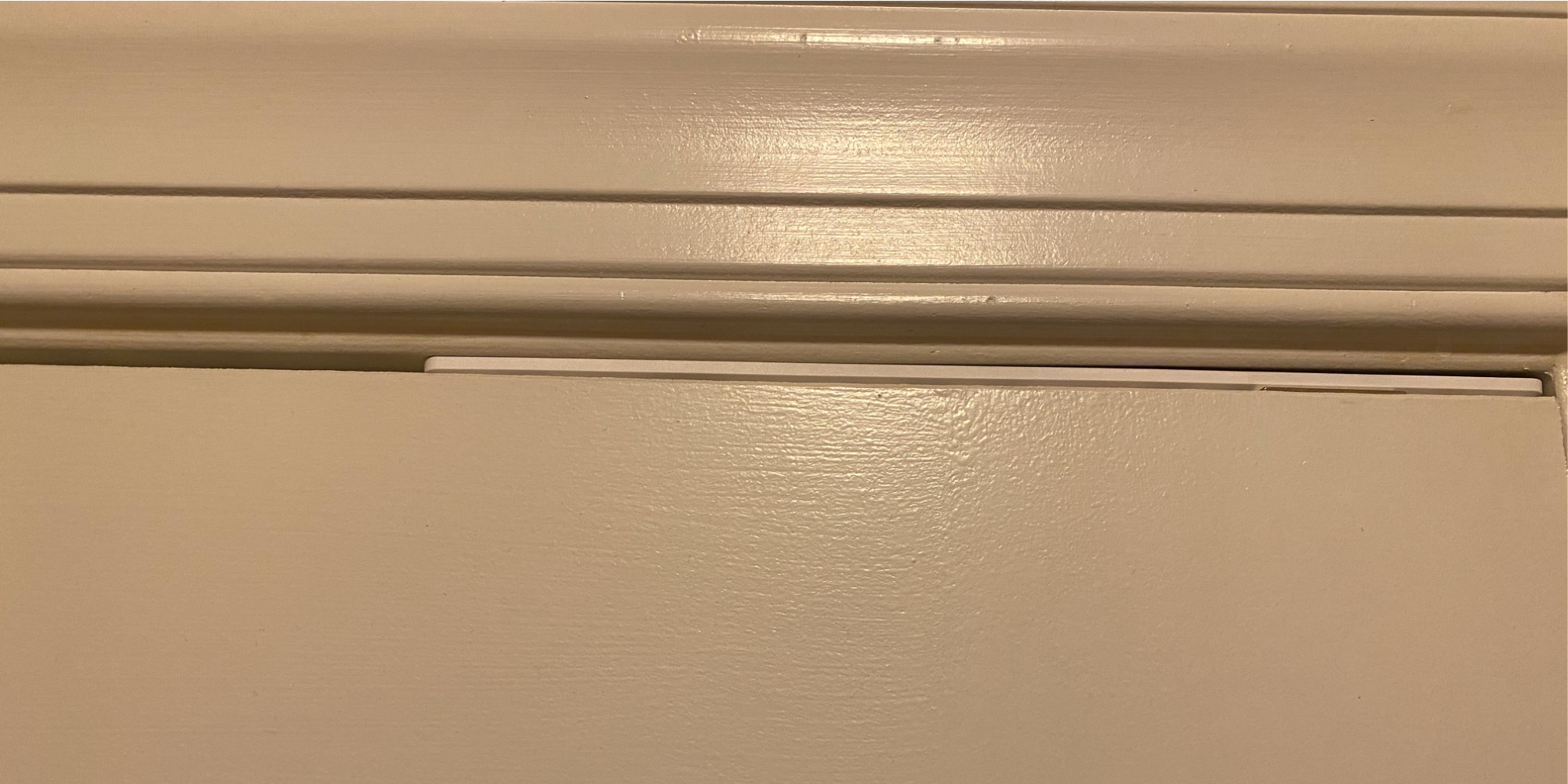 Abode has three different types of door/window sensors. They have a standard model, a mini model, and a slim model. The slim model immediately caught my eye because it fits in a door jam and stays hidden. The standard and mini models are powered by replaceable batteries. The normal ones will last ten years, and the mini will last four years. The slim model will last eight years, but it’s not replaceable. They also have a recessed model, but you’ll only want to go that route if you are comfortable drilling into your door. I was able to test the mini model and the slim one, and both were able to be installed within minutes using no tools whatsoever. You can see the slim model in the photo above.

When I ordered the Smoke Monitors, I assumed they were actual smoke detectors, but they are not. They are meant to be mounted next to your existing smoke detectors that are wired into your home. The monitors detect the sound that smoke detectors make and then trigger the alarm. While I didn’t know all of this when I ordered, it’s a pretty smart way to make the sensors smaller and lower cost while still accomplishing the result. The smoke monitors are not HomeKit compatible, though.

The abode iota base station includes a built-in 1080p camera (can be disabled in settings) that can be programmed to start taking video when the alarm is triggered. It can also be added to the Apple Home app, where you can create various automations around it. Overall, it works well. We have it pointed at our front door, acting as a second motion sensor. My only complaint is that it doesn’t support HomeKit Secure Video, but not many vendors do just yet. 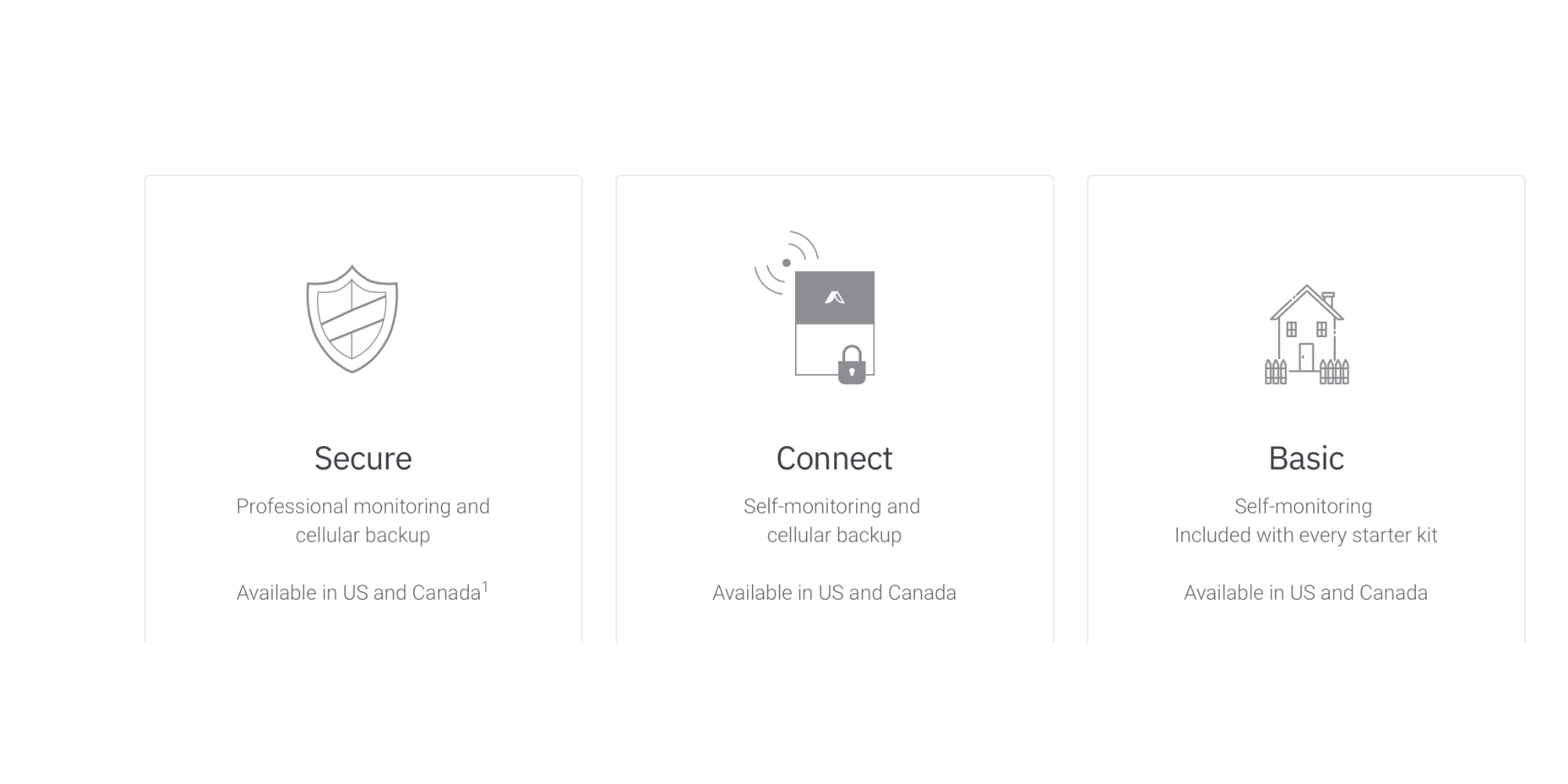 As with any alarm systems, there are various ways to “monitor” the system. With abode, you have three options that can fit any budget. The free plan allows you to monitor your alarm remotely using your home internet connection. It includes three days of media storage and access to create automations.

The Connect plan ($80/year) offers all the things included in the free plan, but it also activates the LTE connection as a backup. It also bumps media storage up to 14 days.

The Secure plan bumps the media storage to 90 days, but it also activates 24/7 professional monitoring along with an unlimited warranty on your devices if you are paying annually.

I went with Secure plan because it includes 24/7 monitoring because I wanted someone to be able to call the police/fire department if the alarm goes off and I am not available. When I signed up, I got my first year for $100 with a starter kit purchase, but it only goes up to $200 after that. I save 15% off my homeowners’ insurance as well, so it ends up costing even less.

Overall, the installation was straight forward. Once you unbox the base station, you plug it up to ethernet and power, and then open the abode app. You type in your gateway code, and that kicks off the set up process. Once I got it configured, I was able to connect it to Wi-Fi so that I could put it in a better location. Activating the door sensors took just a few seconds, and then I spent another minute or so mounting them. The smoke sensors took around three minutes each, but that was mainly due to the fact I had to find a step stool to screw them into the ceiling.

Mounting the keypad and second motion sensor was also an absolute breeze. I think I spent a half-hour installing and configuring everything.  The main hiccup I ran into was that I initially plugged the base station into a surge protector that is on a HomeKit plug, and it was off. It took me a good five minutes to realize what was happening. Once it was all configured, I was able to invite my wife to join our home so she could manage and operate it as well. 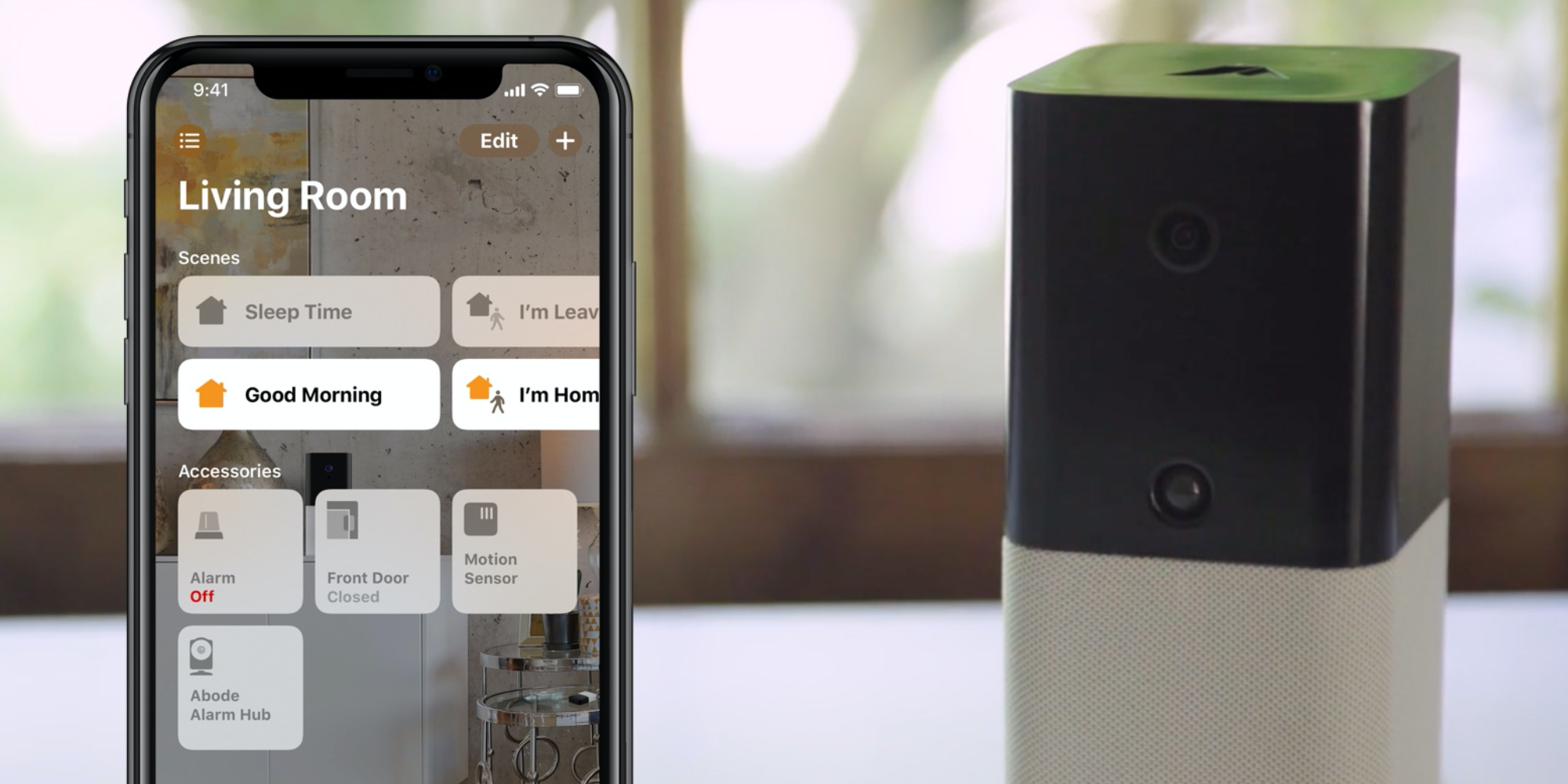 Like I mentioned in my first paragraph, HomeKit integration is one of the things that caused me to pull the trigger on the abode iota starter kit. With HomeKit integration, I am also to leverage my existing smart home setup to work with Abode. All of the set up for HomeKit is done inside the Abode app. It generates a HomeKit code, and then you manually add it to the app. In my system, the motion sensors, camera, and door sensors are compatible with HomeKit.

One of the HomeKit functions I am currently using is when the motion sensor sees movement between 5:00 AM and 7:00 AM, it triggers the lamp in our kitchen that is connected via a Wemo Mini Smart Plug. I am getting up around 5:00 AM, so I want this light on as I make my morning coffee.

Another HomeKit integration is that the alarm auto enables when it no longer detects motions after 10:00 PM as we are likely in bed. I am using one automation inside the Abode iPhone app, and that is so it will auto-enable the alarm if my wife and I are both away from home. I could have done this inside the Home app, but I wanted to test the automations inside of abode’s app as well. If you are a heavy IFTTT user, it also supports the platform.

Overall, I am quite pleased with my purchase of the abode iota security system (I did not ask for a review unit, I paid for it). It’s replacing a legacy system, so I am happy I can now monitor and manage it remotely. By using the built-in camera that records video when the alarm sounds, I can check up on my home if something happens. Because the plan I am using includes LTE support, I don’t have to worry about someone cutting my phone line and disabling communication with the monitoring station.

The HomeKit integration makes it a natural choice for folks in the Apple ecosystem. If you want to use Nest Secure, you can check out my review of the Starling Home Hub, but otherwise, I would recommend abode.

The only hiccup I’ve had with is that on the first night, the HomeKit integration locked up. A quick reboot of the base station fixed it immediately. In my opinion, abode iota is the best DIY alarm system for Apple users thanks to its HomeKit integration, great looking hardware, and easy installation. I plan to add on the abode doorbell camera when it’s released as well.