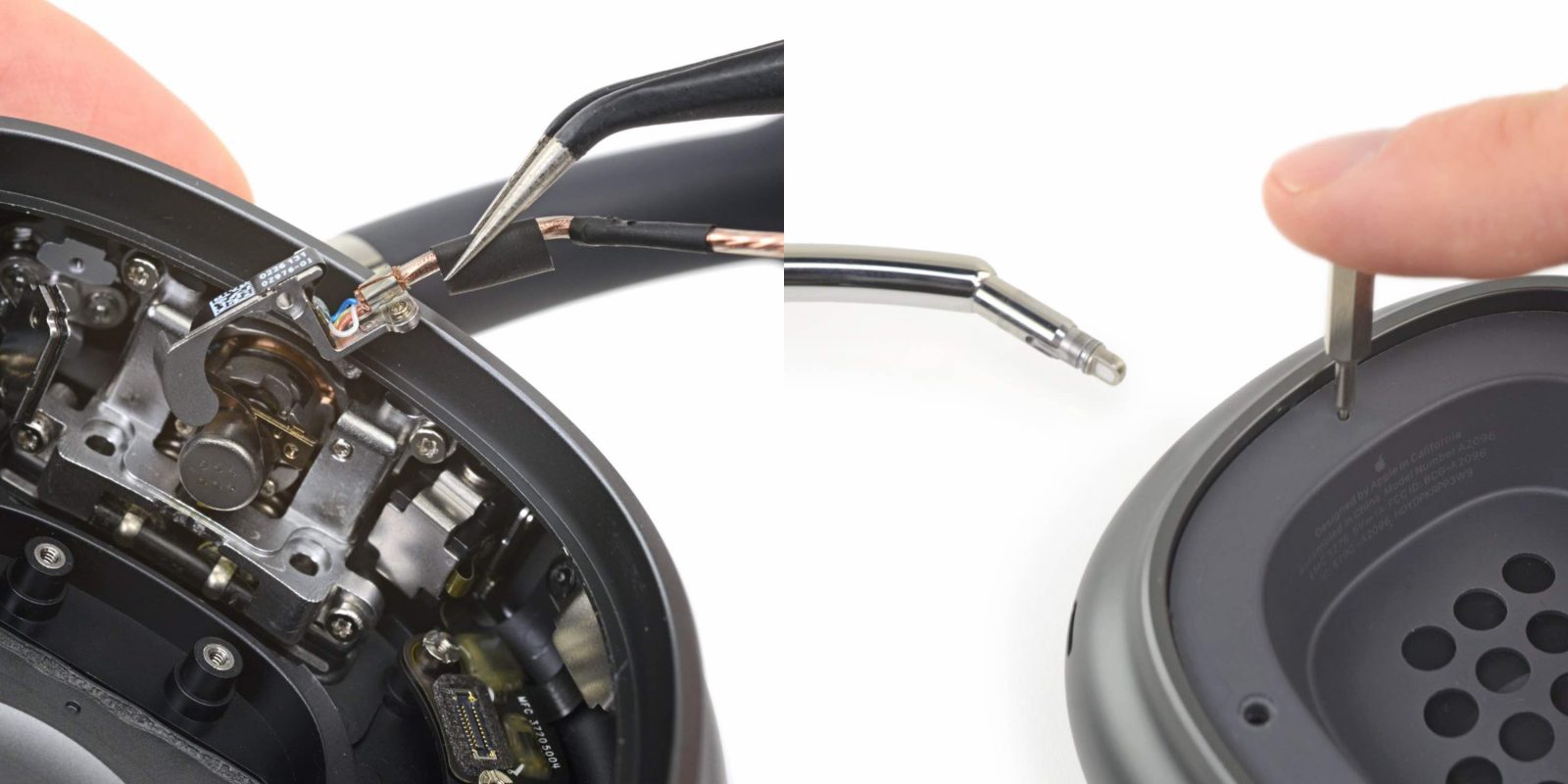 iFixit shared an initial look at its AirPods Max teardown last month, and now it has completed the intricate process. The final result has revealed some really interesting details about AirPods Max like the headband actually being user-removable which could hint at customization, how the electromechanical hinge hardware works, and that they are “actually fairly serviceable.” 9to5Mac has also uncovered that iOS devices can see the “headband type” that AirPods Max are using.

We learned more about the basics of AirPods Max components in iFixit’s initial look. That revealed the 40 mm dynamic drivers, H1 chips, battery cells, and more.

Now iFixit has updated its teardown with all the nitty gritty details today. Notably, AirPods Max have what iFixit calls a “slightly confusing and over-complicated opening process” and says they’re a “delightfully perplexing pair of headphones.”

From the packed logic board found in each ear cup, to the Digital Crown, the electromechanical hinge hardware to the clamp tension system, Apple has gone to great lengths in creating and manufacturing these headphones.

Interestingly, iFixit discovered you can detach the whole headband with a SIM tool without having to disassemble them:

Here’s the trick, and the best part: despite the joint’s complexity, you can detach the entire headband from AirPods Max with just a SIM card removal tool or paperclip, without even opening the ear cup.

All users would have to do is remove the magnetic ear cups and use a SIM (or similar) tool to remove the headband as shown below. That could be a hint that Apple may have designed these in mind with interchangeable headbands as some reports had claimed.

9to5Mac has also discovered that iOS devices can see what “headband type” AirPods Max are using. That could be used to do things like correctly display AirPods Max in the UI. However, this could also just be the remnants of firmware that Apple was preparing in case it launched interchangeable headbands before scrapping the plans.

But one positive note is that the headband type identifier is present in iOS 14.4 beta 2.

While Apple hasn’t acknowledged this or launched any alternate headbands, it’s possible they could arrive in the future. Allowing for headband customization along with being able to easily swap ear cups would make AirPods Max even more appealing.

Apple’s electromechanical hinge hardware is both intricate and overbuilt, and might make the AirPods Max’s price tag a little easier to swallow.

This hinge needs to provide a sturdy but comfortable connection for the headband, while also reliably passing a power connection through from the battery.
Apple uses a wraparound flex cable in the rotating portion of the joint, with some clever routing and built-in strain relief—then switches over to spring contacts for the connection to the headband. What a flex.

Hopefully, all that adds up to fewer failures from cable wear. Durability is hard to predict at times, but it’s clear that a lot of thought went into this setup.

All in all, iFixit thinks AirPods Max are “actually fairly serviceable” and gave them 6/10 for repairability, the AirPods family’s first score above 0. Also, after understanding everything that goes into AirPods Max, iFixit asks “Is $550 starting to seem … reasonable?”

For a fun finish to this super thorough teardown, iFixit opened up some popular Sony and Bose over-ear headphones and the comparisons really do highlight that AirPods Max are in a different league. As iFixit puts it:

With all their intricate, precision-engineered parts, AirPods Max remind us more of a mechanical watch than of any pair of headphones.

Check out the full AirPods Max teardown at iFixit.