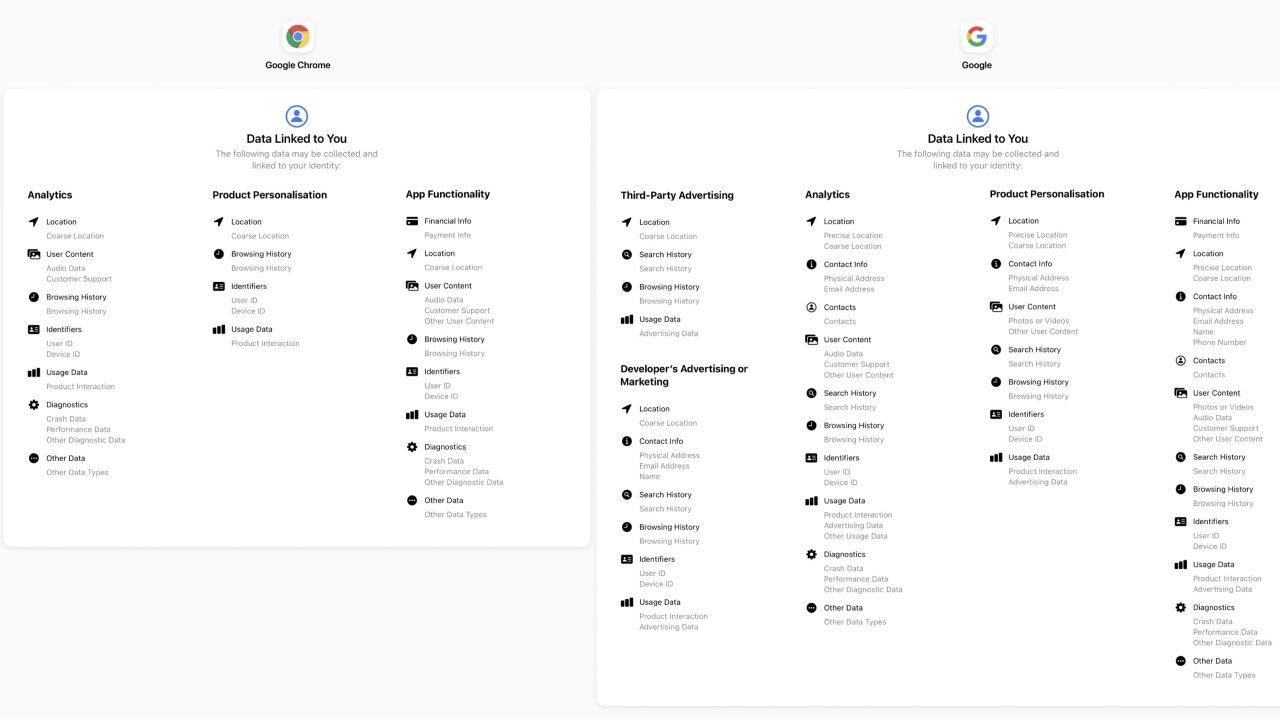 Google is slowly updating its many iOS applications with App Store privacy labels, detailing the type of data it collects from users. The Google and Chrome applications were recently updated with these new labels, and DuckDuckGo is already using them to its advantage.

In a post on Twitter this afternoon, DuckDuckGo took issue with Google’s privacy labels for Search and Gmail, while also pointing out that the company only added the labels “after months of stalling.” DuckDuckGo has often billed itself as a privacy-friendly alternative to Google apps, and it’s now using the App Store privacy labels as more evidence:

After months of stalling, Google finally revealed how much personal data they collect in Chrome and the Google app. No wonder they wanted to hide it. Spying on users has nothing to do with building a great web browser or search engine. We would know (our app is both in one).

DuckDuckGo Privacy Browser has been the second most downloaded mobile browser in the US (after Chrome) and, as you might expect, doesn’t collect any data that’s linked to you, making it simple to get the privacy you deserve online.

The image attached to the tweet shows side-by-side comparisons of the DuckDuckGo App Store privacy label, Chrome, and Google apps. The DuckDuckGo privacy label indicates that it does not collect any data linked to the user, but the same can’t be said for the Google and Chrome apps.

The privacy labels for Google and Chrome show that data such as location, browsing history, financial information, search history, and more are linked to the user for things like analytics, personalization, and third-party advertising. None of this should necessarily be surprising for Google users, but DuckDuck is using it to its advantage.

The App Store privacy labels went live in the App Store in December. These privacy “nutrition labels” were first introduced at WWDC over the summer, with Apple saying the goal is to better inform consumers of the privacy practices of individual applications. The App Privacy labels are divided into three sections: “data used to track you,” “data linked to you,” and “data not linked to you.”

What do you think of DuckDuckGo using the App Store privacy labels as a way to differentiate itself from Google? Let us know down in the comments!