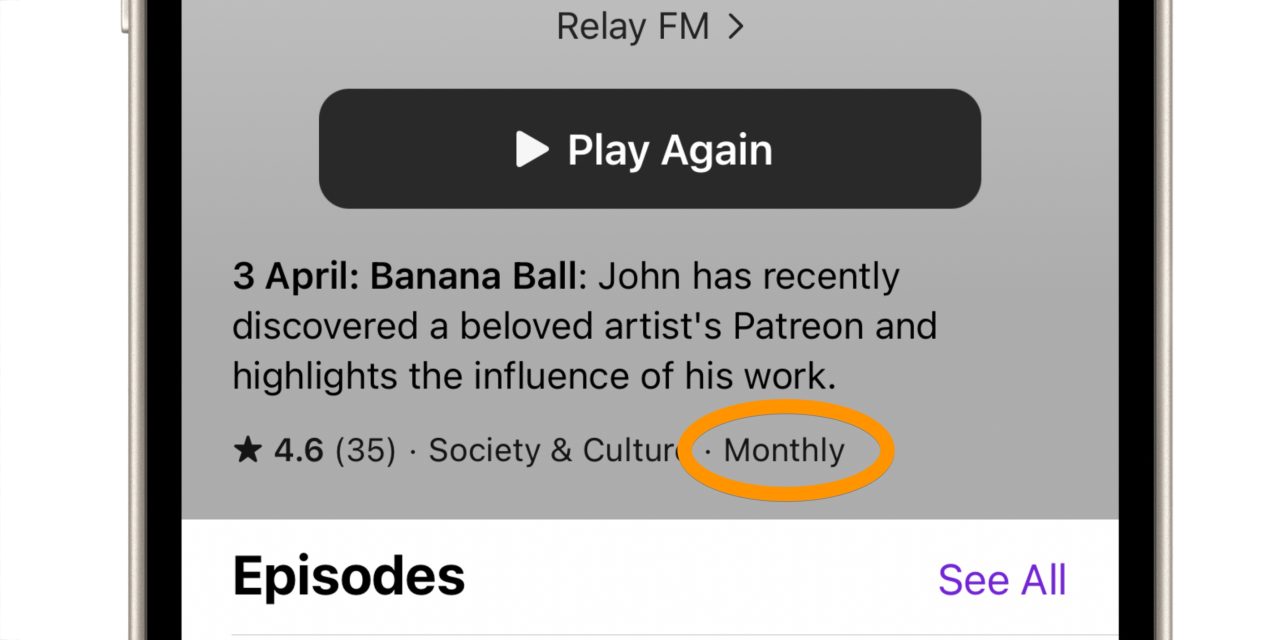 iOS 14.5 is bringing a variety of changes and enhancements to the Podcasts app on iPhone and iPad. With a recent server side change, the new Podcasts app displays the release schedule for a particular podcast on the show details page.

As shown in the screenshots, the episodic release period — such as weekly, monthly, or daily — is now shown alongside the podcast category and ratings summary inside of Apple Podcasts …

Users of third-party Podcasts clients will already be familiar with this feature. Release date summaries are already pretty commonplace in other podcast clients, in apps like Overcast and Pocketcasts.

However, this information is not actually standard metadata provided by the podcast creator. Instead, each app analyzes the podcast feed of past episodes and uses “smarts” to try and find a regular pattern.

Some apps even go further than this; Pocketcasts predicts the release date of the next episode before the podcast hosts have even recorded it, based on previous patterns.

Before iOS 14.5, the Apple Podcasts app did not attempt to guess this information at all, so it is nice to see that Apple is catching up here. However, Apple’s implementation of this feature seems to be a bit unreliable. While 9to5Mac Daily is correctly marked as daily, the 9to5Mac Happy Hour podcast is listed as “Biweekly” even though episodes of that show have been released on a consistent weekly basis for more than five years. Many other popular weekly podcasts also appear incorrectly labeled as “Biweekly.”

(The phrase “Biweekly” is also ambiguous in English, and can mean either twice a week or every two weeks, so it’s not the best adjective to use either.)

The updated Podcasts app is available in the current iOS 14.5 beta and macOS 11.3 beta seeds. We expect Apple to announce a firm release date for these operating systems as part of its April event, which starts on April 20 at 10 a.m. PST.