Siri thinks you’ll be able to add your Apple TV remote to Find My [update: not anymore] 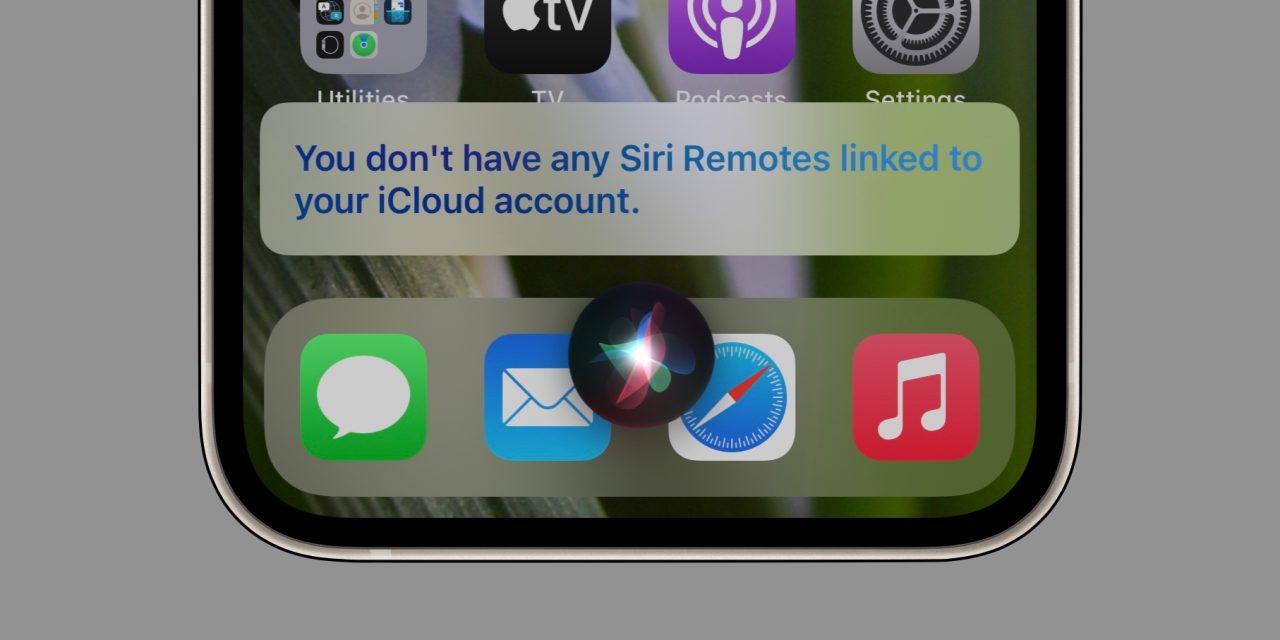 Update (May 2nd): Apple appears to have changed something on the backend as now Siri refuses to attempt to find the Apple TV remote, and responds with a ‘That type of device can’t be set up in Find My’ message.

In a rather curious discovery, Siri seems to believe that the Apple TV Siri Remote will have some kind of Siri integration. If you ask Siri on iOS 14.5 to “Find my Siri Remote” or “Find my Apple TV Remote,” it will reply that it cannot find any Siri Remotes associated with the iCloud account. (Thanks to William from Maryland for the tip-off.)

However, the fact that it attempts to execute your request at all is interesting. Asking for other unsupported devices (like an Apple Pencil) will result in a different failure response stating that this type of accessory cannot be used with Find My. So why does Siri believe the Apple TV remote can?

When the new revamped Siri Remote was unveiled at the Apple event last month, one notable omission was the announcement of any kind of “beeper” to help users find the remote if it gets lost in the couch.

In the run-up to the event, many people had expected that the new remote would integrate with Find My, perhaps embedding the U1 chip to offer the same functionality as an AirTag. In fact, Bloomberg said as much in a report about the rumored remote last year.

However, Apple did not announce anything of the sort, and the tech specs page for the new Siri Remote on the Apple Store does not reference any such feature.

(As a reminder, an accessory can have varying levels of ‘Find My’ integration. For instance, AirPods are available in Find My to let the user make them make a sound if they are lost nearby, but they do not communicate with the Find My network, like an AirTag would. Similarly, Find My accessories do not require a U1 chip — none of the upcoming third-party Find My compatible items include an Ultra-Wide Band radio. If an Apple TV remote did support Find My, we would expect it would most likely work like AirPods and allow the user to make the lost remote emit a sound so it can be located in the room.)

The acknowledgment of the Siri Remote support in Find My seems to be a new addition. Whilst we can successfully observe the behavior on iOS 14.5 across many languages, Siri does not understand the same request when asking on an iOS 14.4 device.

It is possible that Apple has a surprise for us, or — more likely — Siri is tipping on the hat on an in-development feature that didn’t make the cut for this generation of remote hardware.

Here’s what we do know about the new Siri Remote. It features a durable aluminum design, new power and mute buttons, and shifts the Siri button to the side. Most notably, the glass trackpad of the previous Siri Remote is replaced by a new circular clickpad that sports physical D-Pad buttons. The clickpad is touch-sensitive, so users can take advantage of tvOS swipe gestures for fast navigation. It goes up for preorder tomorrow for $59 and will ship alongside the new Apple TV 4K in the second half of May.

Whether the Siri Remote will integrate with Find My at all remains an open question. We’ve asked Apple to comment on Siri’s curious behavior and will update the post if we hear anything.