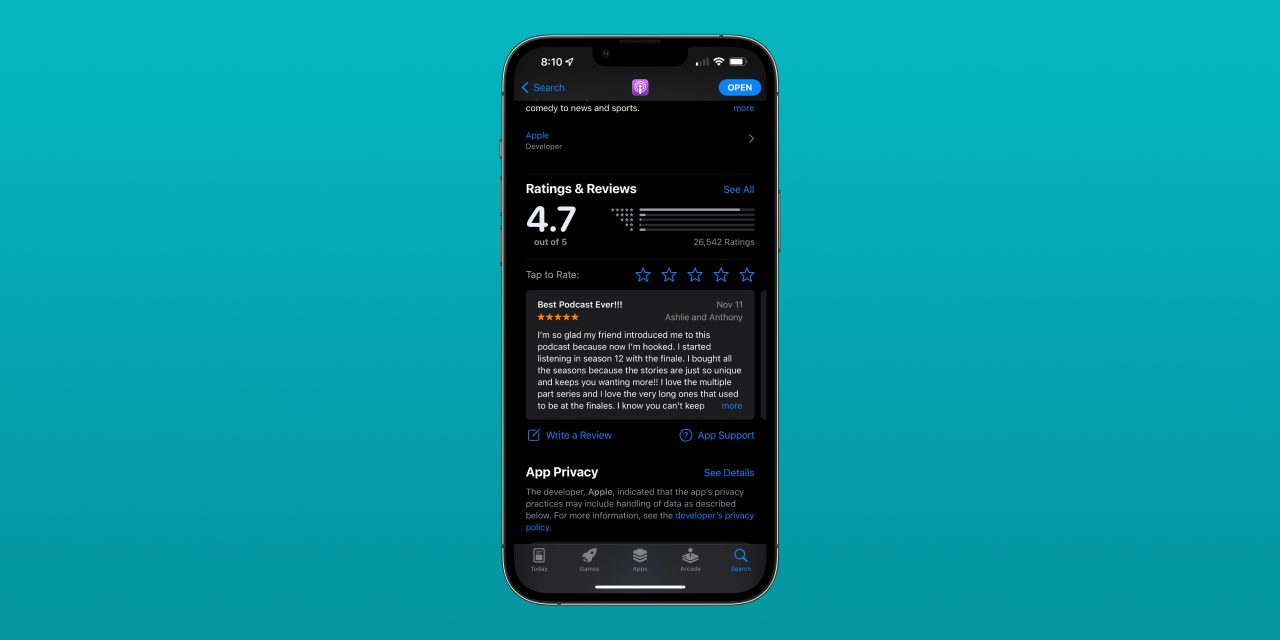 Earlier this year, Apple rolled out the ability to rate and review its own applications on the App Store, including built-in apps like Podcasts, Music, News, and Stocks. One thing that quickly became clear when this rolled out is that the Apple Podcasts is a polarizing app, with an average rating hovering around 2.0 stars.

This week, developer and App Store watchdog Kosta Eleftheriou spotted that the Apple Podcasts app had mysteriously jumped from a 1.8-star rating to 4.6 stars in just over a month’s time. Apple has since confirmed to The Verge that it is now prompting users to rate and review the Apple Podcasts application.

Apple confirmed to The Verge that it’s using a new prompt but claims it’s nothing out of the ordinary. “With iOS 15.1 released last month, Apple Podcasts began prompting listeners to leave a rating and review just like most third-party apps — using the standard Rating & Review prompt available to all developers,” a spokesperson tells us.

But as both The Verge and Eleftheriou note, there is an interesting trend to most of the recent (and positive) reviews for the Apple Podcasts app on the App Store. Many of the reviews are of podcasts themselves, not of the actual Apple Podcasts application.

The Verge compiled a list of some of the “Most Recent” reviews of the Apple Podcasts app:

Meanwhile, if you scroll down and look for the flood of 1-star reviews, many of them are focused on the Apple Podcasts app itself, with criticisms on the design, syncing features, and more. As The Verge points out, this is not a common occurrence with other podcast applications on the App Store. For apps like Overcast and PocketCasts, most reviews are for the apps themselves.

So what remains unclear is what’s causing this confusion for people rating and reviewing the Apple Podcasts app.

But intentional or not, standard or not, the problem with star scores is there’s no way to tell whether they’re legitimate. We don’t know if someone pressed a five-star button because they loved the app, or thought they were rating the podcast itself, or just wanted to close the prompt as quickly as possible. We don’t know if Apple is prompting everyone, or just its most dedicated fans, or some other algorithmic subset that just happened to give it an advantage.