Adobe is one company patiently waiting for the launch of the new iPad Pro as the firm in recent months has prepared for what it expects to be a big user base of professionals interested in its various creative mobile apps on the device. Sharing in the excitement for the launch scheduled for later this week, Adobe just released the video above showing off some of the possibilities of its apps on the new iPad and giving us one our first looks at hands-on impressions with the iPad ahead of product reviews going live.

In addition to offering some previews of upcoming mobile app improvements at its Max conference earlier this year, the company has worked hard to optimize several of its apps that are bound to be popular on the new larger iPad. Apps ready to go for the launch include Photoshop Fix, Photoshop Sketch, Photoshop Mix and Comp CC.

Apple confirmed earlier today that the new 12.9-inch iPad Pro will go on sale Wednesday, November 11th in 40 countries, while the device will hit Apple retail stores sometime later this week. In Apple’s press release, Adobe’s vice president of Products Scott Belsky called the company’s work on software for the device an “industry-advancing collaboration that millions of Adobe and Apple customers will benefit from.”

“iPad Pro enables new forms of mobile creativity that will help transform how creatives work,” said Scott Belsky, vice president of Products at Adobe. “With the larger iPad Pro screen and lightning-fast performance, creatives will be able to take full advantage of Adobe’s family of Creative Cloud mobile apps. For example, the ability to manipulate a 50-megapixel image right on iPad Pro in Photoshop Fix and then send that image to Photoshop CC on a desktop, for further refinement, is the kind of industry-advancing collaboration that millions of Adobe and Apple customers will benefit from.”

While there haven’t been many hands-on videos since Apple first unveiled the device at its press event in September, we did get a look at Disney and Pixar animators playing with the device and offering their first impressions last month. 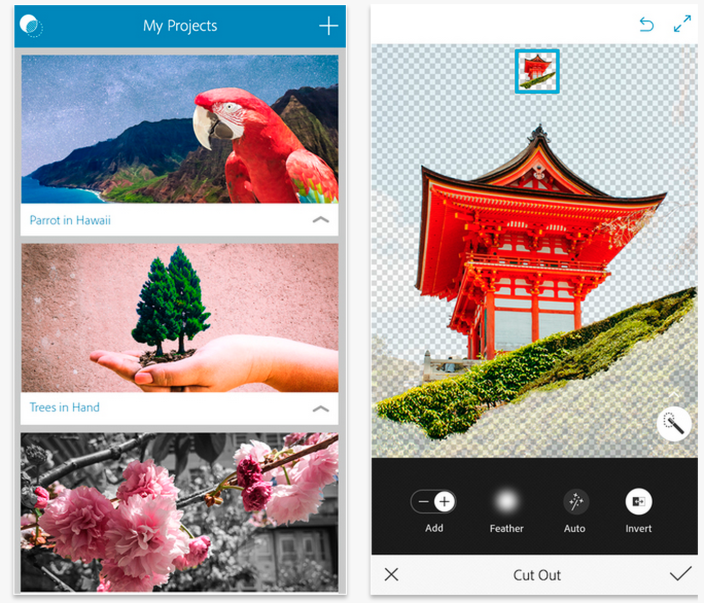 Adobe is updating two of its mobile apps today with a few notable features including a welcomed Adobe Photoshop Mix update that brings support for importing from Creative Cloud Libraries and a new “Send to Lightroom” feature. END_OF_DOCUMENT_TOKEN_TO_BE_REPLACED

Adobe released version 1.4 of Photoshop Mix for iPhone and iPad today adding a new “auto crop” feature that Adobe says “analyzes images and suggests non-destructive boundaries based on the primary objects in an image.”

The latest version of the photo editing app also includes the addition of Instagram as a sharing option while sharing to Facebook has been improved. The Creative Cloud-connected app can now open files directly from Lightroom, Photoshop Sketch, Illustrator Line, and Illustrator Draw as well while support for six more languages was added in the update.

Check out the full change log for Photoshop Mix, which first launched in June, below with all the new details.

Adobe has updated its Photoshop Mix iPad app with several new features and tweaks. Version 1.1 of the app includes undo and redo support for quickly rolling back edits up to three levels.

The update also introduces support for exporting a JPEG or masked PNG to the iPad’s camera roll. You can also import images to edit from Dropbox. Foregrounds and background layers can now be switched using the Image Swap feature. Other miscellaneous performance enhancements have also been made to allow for faster project loading.