KGI: Apple to upgrade Touch ID sensor in next iPhone, expects over a quarter of a billion units in 2015 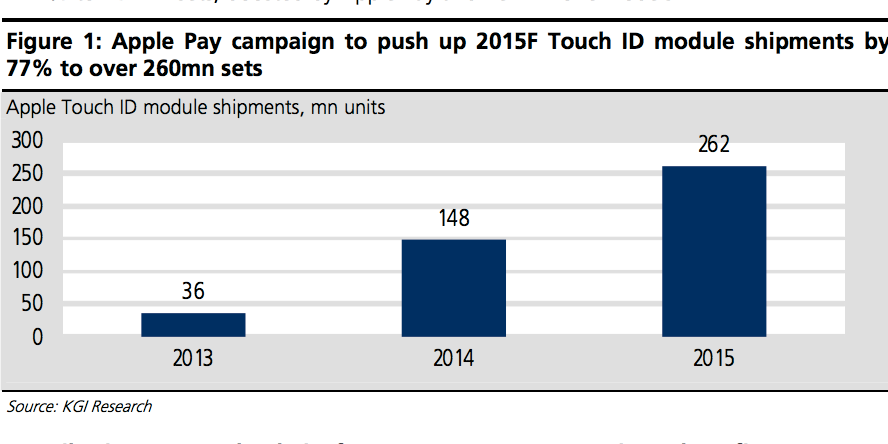 KGI is out with a new report today predicting both a large rise in the number of Touch ID sensors shipped this year as well as an improved version of the biometric security reader for the next version of the iPhone. “We raise our 2015F shipments of Touch ID (fingerprint recognition) module by 12.4% to 262mn sets, up 77% YoY.” As for the updated Touch ID sensor, the improved version is believed to offer more reliable reads and better security as Apple continues to push Apple Pay, it’s recently launched mobile payment service:

We think the new iPhone, expected to launch in 3Q15, will be equipped with an upgraded Touch ID module, with which Apple (US) intends to offer a better and safer Apple Pay user experience with reduced reading errors.

The report also notes that despite recent patent filings covering technology that would potentially embed the biometric sensor into the display of the device, KGI believes such an upgrade is not likely in the near term:

Though Apple has filed patents for the integration of Touch ID and touch panel, this isn’t likely to bear fruit near term as complex algorithms and sapphire cover lens are also required. We therefore don’t see any impact on supply chain momentum.

The described 77% year over year growth for Touch ID modules shipping is likely expected also based on even more generations of products including the biometric sensor.

Touch ID first shipped with the iPhone 5s in the fall of 2013 while Apple obviously included the sensor with the iPhone 6 and iPhone 6 Plus in 2014; additionally, Apple brought the Touch ID sensor to its tablet lineup with the introduction of the iPad mini 3 and iPad Air 2 last fall. While the iPod touch has not seen a significant hardware refresh since the fall of 2012, Touch ID is not yet available anywhere on the iPod lineup.

The Touch ID sensor was initially only used to unlock the iPhone and authorize purchases of media and apps from the iTunes Store and App Store on iOS. The release of Apple Pay added the additional functionality of authorizing payments for physical goods through apps as well as making purchases in retail stores and other venues.

Sticking with recent iPhone releases in previous years, KGI expects the upgraded Touch ID module to appear on new iPhones shipping in the third quarter of this year with production ramping up during the second quarter of 2015.