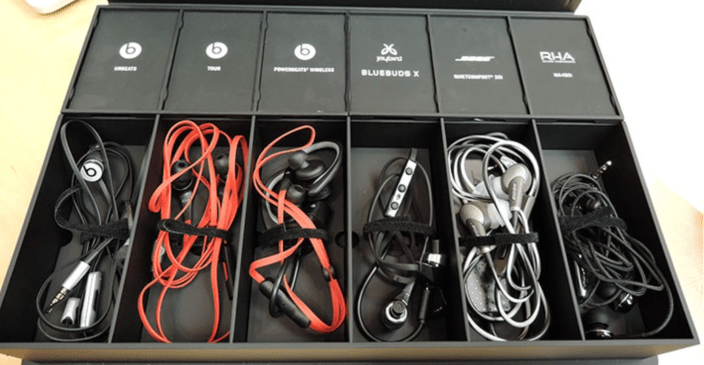 Earlier this month we shared that Apple would soon begin allowing customers to try in-ear headphones at its retail stores. As we mentioned then, Demo Kits include six models of in-ear headphones, half of which are Beats-branded:

Japanese blog Macotakara has now shared an image of the Demo Kits including each headphone model reported before.  The Demo Kits include replaceable ear tips for each customer that requests a try-on and alcohol wipes are available to keep the headphones clean between uses. This, of course, addresses the sanitation concerns that trying in-ear headphones presents while allowing customers to hear sound quality before spending $50 or $100 or more on a product. Apple has long made available demo units of on-ear and over-ear headphones at its retail stores including various models of Beats connected to iPhones and iPods.

Ahead of the Demo Kit introduction, Apple cited its own survey to employees that over half of their customers would prefer to try in-ear headphones before buying them. Notably absent from the kit is Apple’s own in-ear headphones, although its Apple Watch-compatbile PowerBeats 2 Wireless headphones are present.