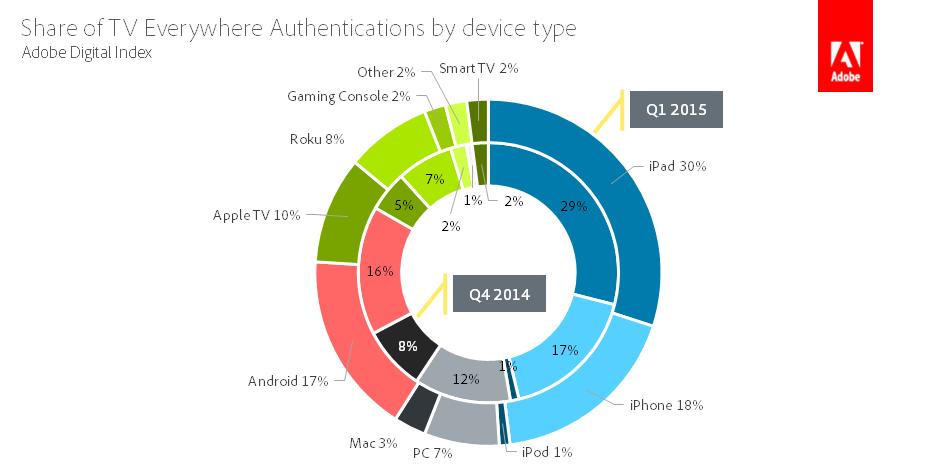 Apple TV devices doubling their share of premium video viewing quarter over quarter (QoQ) from 5% to 10%–overtaking Roku […] That’s huge. We never see double in quarter-over-quarter in something that’s been around for a couple of years. We expect Apple TV to take off even more.

Why the spike? Apple dropped the price of the Apple TV to $69 and it grows a few new channels every month but the survey didn’t offer any guesses. Adobe also noted that iOS devices account continue

“When it comes to digital video, people are either watching on a portable device or on a high-fidelity screen,” Gaffney said. “It looks like desktops

are losing the battle in the home

Gaffney said that Apple was in a dominant position

due to both its customer base and the wealth of data it holds on viewing habits, and that that “the challenge will be to see if it can monetize the strategy fast enough to get ahead of the movement away from linear TV toward digital viewing.”

to gain new content, with CBS yesterday announcing a standalone subscription version of its premium network Showtime on Apple TV, the day after NatGeo TV and Nat Geo Wild was added. Apple also confirmed yesterday that the Apple TV will form the HomeKit hub allowing remote control of connected devices from outside the home.