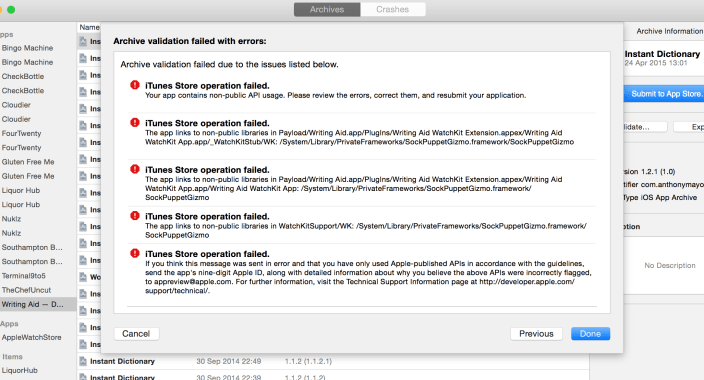 Update: The problem should now be resolved. Watch apps should upload as normal once again.

Developers are flocking to Apple’s developer forums today as the iTunes Connect submissions process is currently experiencing a glitch which makes it impossible for developers to submit apps that include Apple Watch extensions.

Rather than continuing submission process as normal, the system is incorrectly flagging up misuse of an Apple private framework called SockPuppetGizmo. Naturally, this is causing frustration in the developer community at the moment because it prevents apps from being submitted to the App Store.

Before apps reach human approval, they are first sent through an automatic process to verify certain elements of the submitted code usually checking for private API usage and such. It is this step where the bug resides causing erroneous rejections.

Internally, the SockPuppetGizmo framework handles much of the cross-device communication between the iPhone and WatchKit apps. The submission system is incorrectly reporting that developers are linking to non-public libraries and therefore rejecting the binary.

Although this framework is technically private, developers are doing nothing wrong and even old apps are now being rejected which were once approved, confirming it is a bug on Apple’s servers. The screenshot above shows an unchanged binary failing validation today that was successfully submitted to the App Store in late April.

There is no known workaround so right now there is no way to get around the problem. Developers wanting to submit apps that include Apple Watch apps are simply unable to do so currently.

Although this is annoying for the time being, Apple will likely fix the problem soon so developers can continue going about their business as normal. Apple is yet to comment on the matter, however.