Apple is letting users request songs on Beats 1, here’s how 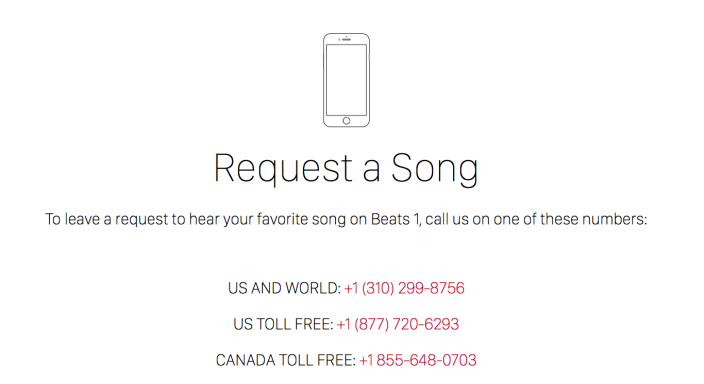 Apple Music and its accompanying 24/7 always on radio station Beats 1 launched earlier today with Zane Lowe hosting. Alongside Apple Music, the company launched a refreshed Tumblr blog with Beats 1’s schedule. The company has also launched a webpage inviting users to request content to be played.

“To leave a request to hear your favorite song on Beats 1, call us on one of these numbers,” the webpage reads. Apple has phone numbers listed for the US, UK, France, Japan, Germany, and a handful of other countries, as well as a generic “world” number.

As Beats 1 revealed in a tweet, Travis Mills is hosting a show at 5PM PT/8PM ET that is called “Requests.” It’s unclear if requests will be played during any of the other shows on the station.

Hi – In a few hours we turn the show over to you. Hit us w/ your requests for @ilovetmills: http://t.co/9uRuyaRchl #Beats1Requests

If you want to request a song to be played on Beats 1, head to this webpage and the appropriate phone number for your area. In addition to phoning in a request, listeners can also use Apple’s iMessage by messaging beats1radio@icloud.com to ask Beats1 to broadcast a song.