WWDC Wishlist: How iPhone and iPad could improve with iOS 11 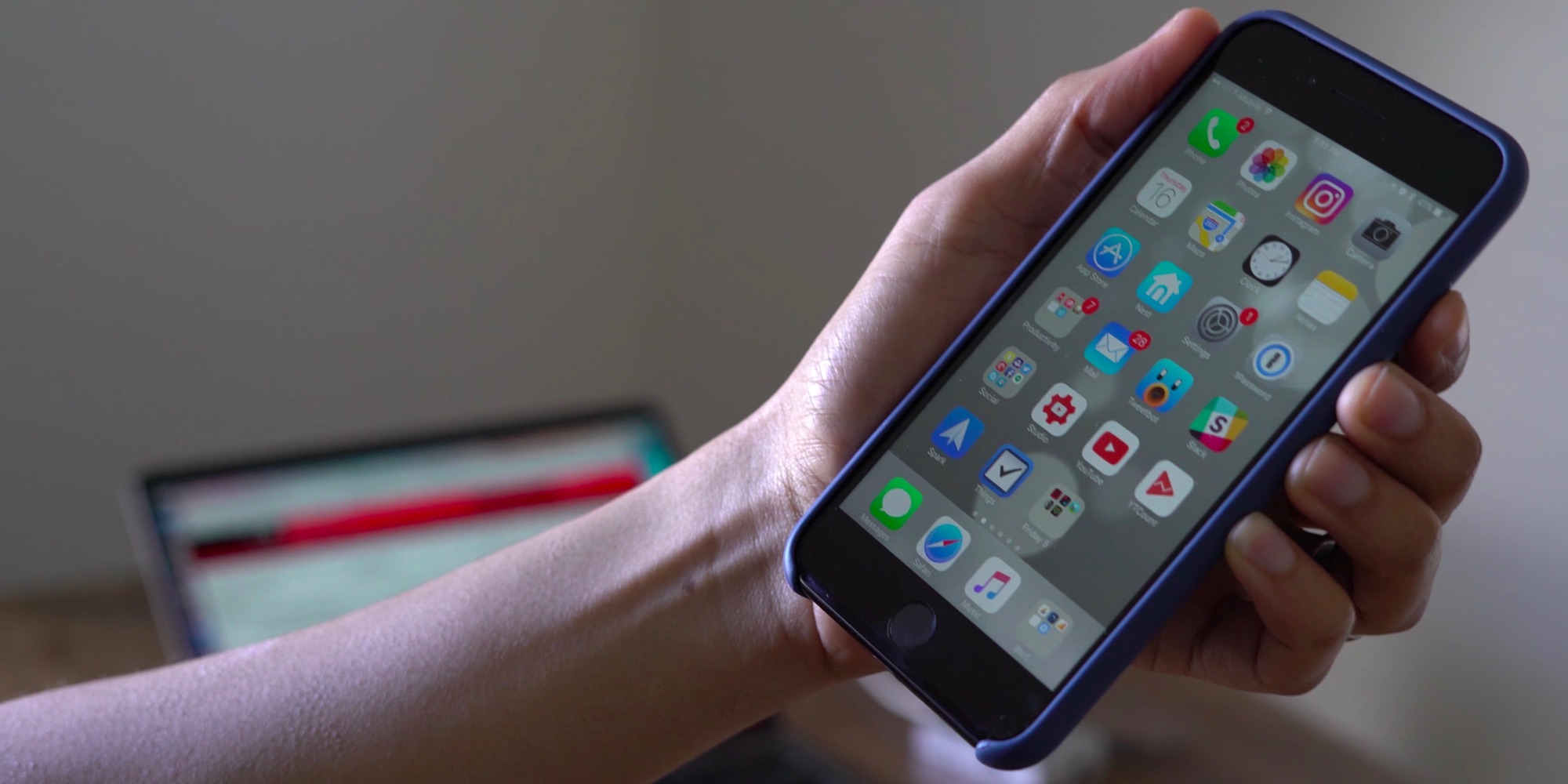 Yesterday we took a look at a few new features we hope to see coming to macOS at this year’s Worldwide Developers Conference. With no Spring event in sight, Apple is set to have a strong WWDC 2017 with updates coming across all platforms. Today we’ll be taking a look at what we hope to see in Apple’s next major iOS update: iOS 11.

Starting with the most obvious and lengthiest area for improvement, we expect big strides from Siri this year. With multiple acquisitions over the last year, Apple has pulled in different companies and employees to bolster its artificial intelligence and machine learning divisions.

A hopeful key area for improvement for Siri will be the ability to use it while offline. When the AirPods launched, users quickly discovered just how frustrating it can be when Siri can’t connect to the internet for basic commands.

Siri could also improve ten-fold by directly integrating across platforms by using iCloud accounts. For example, a user should be able to ask Siri a command on one device and have that behavior shared or done on other devices, like an iPad or Apple TV. Imagine being able to ask Siri from your iPhone to play the latest episode of your favorite TV show on your Apple TV. A sketchy rumor based on a recently uncovered patent indicates that Apple may do just this with iOS 11.

With iOS 11, Apple also has the chance to introduce a more naturally invoked Siri by creating an interface that remains out-of-the-way. When activating Siri today the interface takes up the entire display meaning users can lose visual context while looking at something else on-screen. Enabling the ability to ask Siri for a restaurant’s business hours while also looking at the restaurant’s menu on their site could become a possibility.

A smaller area Siri could work towards is better understanding or enabling multi-lingual environments. I have a few different keyboard languages configured on my iPhone, and I’d love to be able to send multi-lingual messages via Siri. Craig Federighi has voiced how difficult this situation is, but that it is something Apple is working towards. 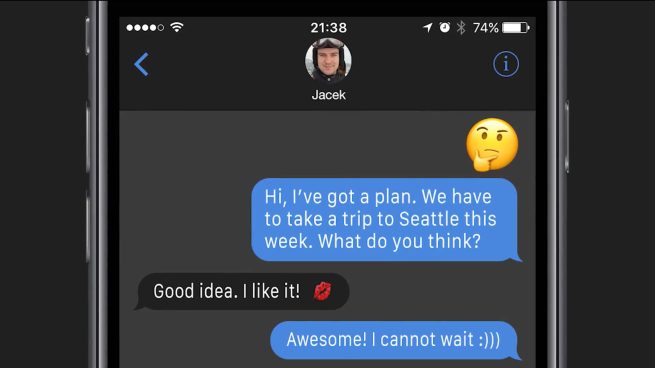 Rumors of Apple’s upcoming ‘dark mode’ has persisted for months now, but the closest we’ve gotten is Apple introducing Night Shift with iOS 9.3. Not exactly what many 9to5Mac readers were expecting or even desired. However, it was at least a step to show that Apple might be listening. A system wide dark mode remains to be seen, and visually it could introduce a whole new feel to iOS.

While not a new technology by any means, the success of Pokémon Go has brought augmented reality to the masses. Rumors of Apple bringing AR to the native camera have surfaced and we’ve now even seen a similar idea brought to Samsung’s new Bixby AI assistant. Bringing an AR interface to the native camera app would mean being able to recognize real world objects simply by pointing at them.

Realistically this could mean just getting features that align with the Apple’s new Clips app, but we’re hoping for something more. According to KGI’s Ming-Chi Kuo, the iPhone 8 is expected to get a 3D front camera that would harness the tech developed by PrimeSense. This could potentially generate 3D selfies which are then used in augmented reality games.

This means bringing new levels to games and third-party applications, that is if Apple were to open the APIs to developers. Using augmented reality, apps would be able to transform real world environments into new landscapes, or even map out environments similar to Google’s Tango project.

Instagram, Snapchat, and YouTube have all implemented a volume HUD that stays out of the way, and seeing iOS implement a similar feature system-wide would be welcome.

With reports that the newest iPhone 8 will utilize OLED displays, an always-on Lock Screen display with time and notifications may be possible.

Similar reports that mention the iPhone 8’s new display technology also mention that the display will see a bump up in size. A larger display alongside a new aspect ratio means that iOS may be ready to introduce split-screen support on its iPhones. While the iPads have had this for a while, iPhones have been regulated to split-views within a single application.

The Music app has gone through its own number of revisions since its original launch, but it still remains a lot to be desired. As our readers have pointed out, in some directions it improves and in others it takes a step back. Managing the organization of the UI to show music in the local library and Apple Music catalog has proved difficult on iOS, but it’s an area where we’d like to see further improvements. Apple also hinted that it’s going to do some reorganization in the app, hopefully at the very least, as it introduces a new section to promote its first original series debuting starting this month. Read our recent roundup of what’s next for Apple Music and Beats 1 for more.

The release of iOS 10 saw the rework of the previous iOS Control Center. Introducing multiple panes into the Control Center has introduced new pains for many users. Toggles that users don’t want or need are consistently visible taking up precious space. 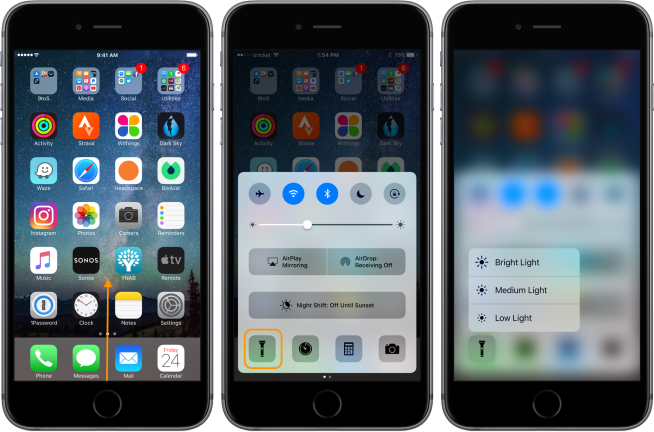 Night Shift is a great example with its huge toggle taking up a fifth of the main pane’s space. Considering that feature can be regulated to a schedule on iOS, it doesn’t need to be as large as it is. Adding a Low Power Mode option might be more beneficial here as users may want to quickly toggle that on and off. Wi-Fi and Bluetooth toggles could also introduce with 3D Touch support allowing users to quickly switch or disconnect devices.

Adding support for multiple users on iOS is becoming more and more of a desire as consumers purchase devices for family usage. A shared family iPad in the living room isn’t uncommon and being able to switch between different preferences and configurations would be very useful. Similar to Touch ID on macOS, users could quickly switch to their profiles using their fingerprints.

This feature specifically could be helpful to cross over into tvOS too, as many family members may have their own desired shows and application profiles.

A feature many were thankful for with iOS 10 was the ability to remove default stock applications not used. Previously to iOS 10, many of these apps were regulated to being hidden away in an un-used folder. Removing stock apps did present a problem though; when third-party apps or Siri requested specific functions, iOS would ask you to re-download the stock app instead of using an alternative app already on the device.

Being able to pick default apps feels more important now than ever. Setting alternative defaults for apps like Calendar and Mail and having third-party apps use those instead would make the iOS experience all the better.

With iOS 10, Apple introduced apps, stickers, and a slew of other features into the Messages app. Unfortunately with the amount of new features thrown-in it’s easy to forget some that may exist. A redesigned or reorganized Messages app could improve discoverability and user friendliness.

Another small area Apple could improve Messages and increase Apple Pay usage, is by introducing a peer-to-peer payment system. Instead of relying on a mix of separate apps to send money to different banks, an iMessage Apple Pay integration could become a popular option for mobile payments. But we’d settle for improved reliability.

We mentioned it with yesterday’s macOS wishlist, but it’s worth mentioning again: group FaceTime calls on iOS should be here now. Here’s to hoping it’s in iOS 11!

There are quite a few other small tweaks that are shared amongst our commenters frequently too. Not big enough to constitute their own sections, but too obvious that we couldn’t leave them out.

Let us know what else you’d like in the next version of iOS the comments below! Last time the overwhelming majority of you voted for Dark Mode and Siri improvements.