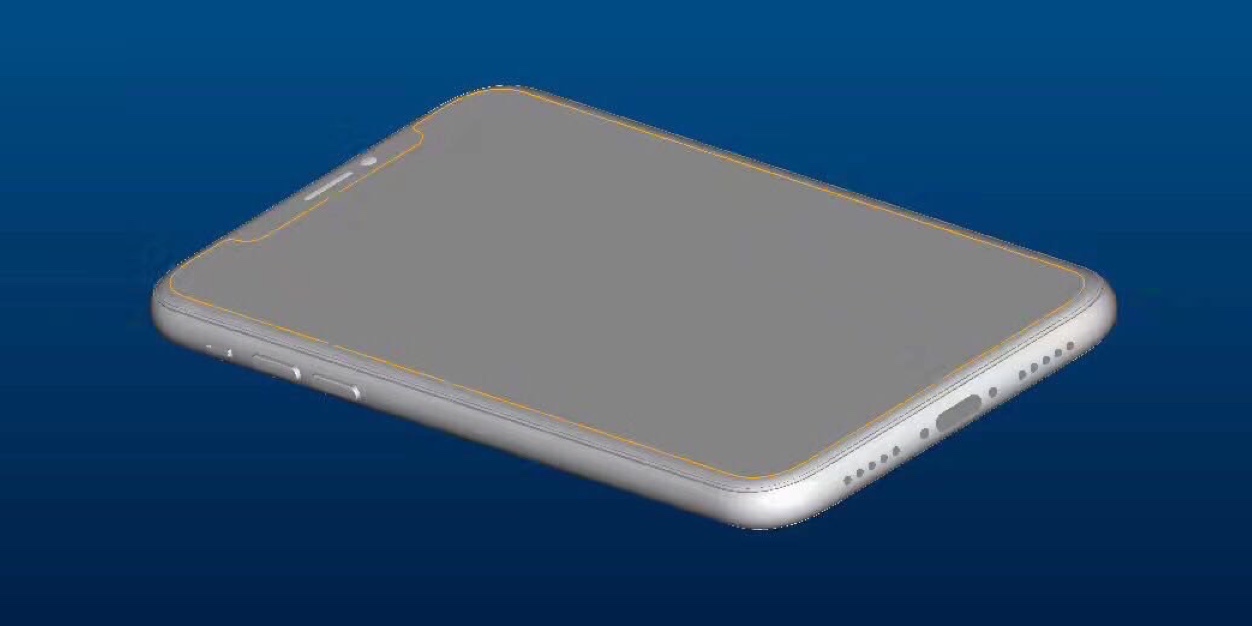 Several iPhone 8 related leaks surfaced over the weekend, backing up a radical new chassis design first seen in April. The new schematics include the various characteristics we’ve seen reported for the OLED iPhone in the past including the elongated power button, vertical dual camera and lack of a physical home button.

Most notably, an orange outline traces the purported screen area of the iPhone 8. Based on this schematic, the screen will be effectively bezel-less on left, right and bottom sides whilst the top edge will cut inwards to accommodate the front camera, earpiece and sensors. More pictures after the jump …

A cut-out of this fashion would breakaway from the typical rectangular screen panels we’ve seen in smartphones to date.

If this design is accurate, Apple is maximizing the screen canvas area as much as possible apart from the lip in which the 3D depth-sensing front camera and earpiece are located.

Assumedly, iOS 11 will take advantage of the smaller screen regions at the top of the phone on the left and right, perhaps by redesigning the status bar.

Earlier reports hinted that the front camera could be ‘below display’ but this does not appear to be the case, as otherwise the orange outline would not include this irregular shape.

The schematics were shared by Slashleaks and Benjamin Geskin. The rear side ‘CAD drawing’ once again shows off the new dual camera system which is vertically-orientated and feature the flash between the two camera irises.

The back schematic includes a circle about a third of the way down the back of the device, which could potentially be a rear Touch ID sensor. However, Geskin says this is not the case and is actually an indicator for where the Apple logo will be (the details are skimmed over in the same way the FCC text is not drawn in).

A report on Friday citing TSMC sources said that Apple has developed an optical fingerprint sensor, enabling the fingerprint recognition to be integrated into the OLED screen itself. If Geskin’s claim about the circle is correct, then these schematics appear to agree with the latest rumors about the iPhone 8 Touch ID system.

In addition to the schematics, Slashleaks also shared some renders of the iPhone 8 design housed inside a protective case. This again corroborates the radically redesigned appearance of the upcoming flagship iPhone seen in recent schematics.

The new iPhone 8 (tentatively-named) is expected to debut this fall alongside two iterative updates to the iPhone 7 and iPhone 7 Plus.

WWDC is just around the corner, a week from today, where Apple will announce iOS 11. It is very possible that the new software, rumored to include a ‘refreshed’ user interface, will include some more clues about the upcoming hardware launches.