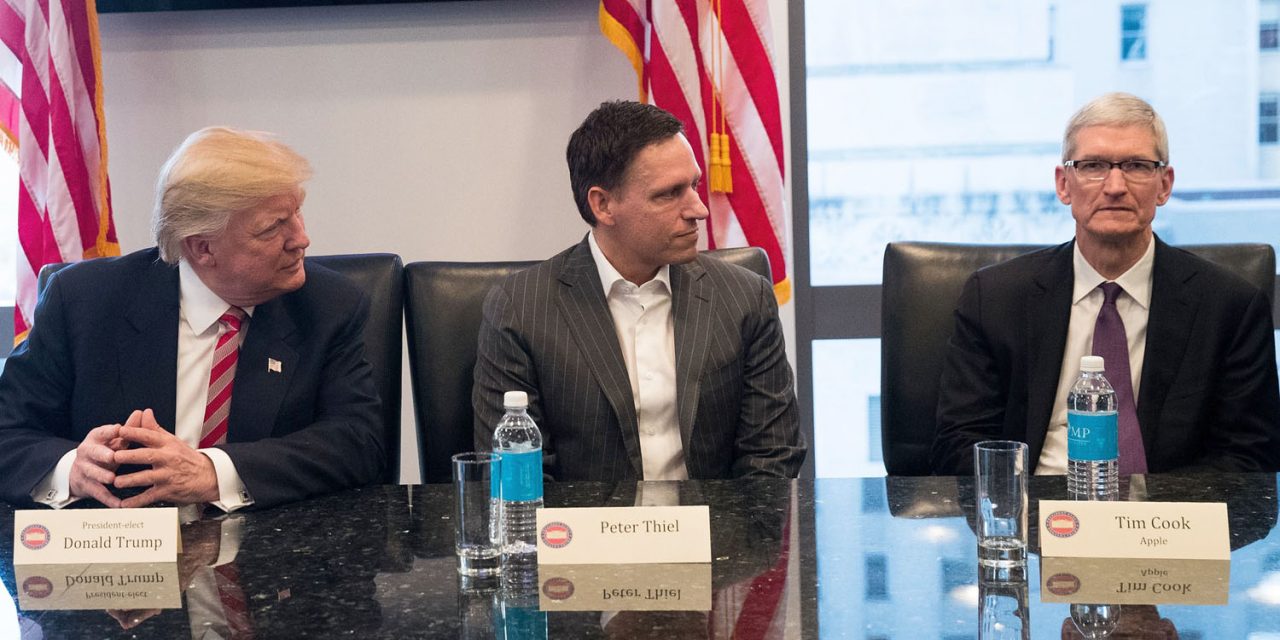 President Trump claimed in a WSJ interview that Tim Cook has promised to build three large manufacturing plants in the U.S. – without specifying when this might happen, where they might be located or what they might make.

“I spoke to [Mr. Cook], he’s promised me three big plants—big, big, big,” Mr. Trump said as part of a discussion about business-tax reform and business investment. “I said you know, Tim, unless you start building your plants in this country, I won’t consider my administration an economic success. He called me, and he said they are going forward.”

But there is every reason to doubt this, no persuasive reason to believe it – and little basis for believing it would matter much even if it were true …

While some assume that Apple makes its products in China because labor costs are cheap, this is only a minor factor. A recent report estimated that labor costs account for just 2.2% of the average cost of an iPhone.

By far the biggest reason is because China has geared itself up for large-scale manufacturing, while the USA has allowed these skills to dwindle.

Tim Cook has made this point himself.

And in case anyone were to take the view that this is just an excuse, it’s a view that has been echoed by multiple suppliers.

When Jabil Circuit, the world’s third-largest contract manufacturer by revenue, needed to quickly ramp up production of its electronics components a few years ago, the company was able to add 35,000 workers in China in less than six weeks. “In no other country can you scale up so quickly,” said John Dulchinos, vice president of digital manufacturing.”

It’s no accident that much of Apple’s manufacturing happens in and around Shenzhen. First, the city is strategically-placed, serving as the gateway between mainland China and Hong Kong. It is one of the largest shipping centers in the world, with a massive container port.

Second, the Chinese government established Shenzhen as the first Special Economic Zone in the country. SEZs are designed to encourage enterprise through relaxed planning regulations and generous tax incentives – and, crucially, to facilitate foreign investment in local companies. It is this, as much as its geographical advantages, which has enabled it to grow at such a pace.

Third, that SEZ was established way back in 1980, meaning that the city has had 37 years to grow into the manufacturing center of the tech world. Apple relies on a huge network of suppliers and sub-contractors, some of which may make just a single tiny component. The majority of them are based in Shenzhen and its immediate surrounds, so the logistics of bringing everything together in one place for assembly are straightforward.

On the flip side, what reason is there to believe the claim? Without wishing to get into political debates, even Trump’s supporters cannot deny that the man has a track-record of making unsubstantiated claims. He speaks off the cuff, and frequently contradicts himself.

And if Apple were really planning to do this, you’d think the company would be keen to confirm the fact – it would be great PR. Instead, there is nothing from Apple but resounding silence.

But even if the company were to somehow overcome all of the staffing and logistical hurdles of U.S. manufacturing, there would be little benefit to it. Any talk of a boom in manufacturing jobs is just a fantasy.

Foxconn currently uses 40,000 robots on its production lines. Ten of its production lines are fully-automated, with not a single human worker carrying out any of the assembly functions. And Foxconn’s goal is to go one step further: 100% automated factories. Essentially, each factory would be one giant robot, with a handful of staff taking care of the machinery. Any brand new plant would be designed with this goal in mind.

The generous interpretation would be that Trump has misunderstood something Cook said about Apple’s $1B advanced manufacturing fund. This is not for its own manufacturing plants, but rather to facilitate the expansion of existing specialist U.S. manufacturing – like glass supplier Corning.

So, no, U.S. Apple plants almost certainly aren’t happening – and it wouldn’t much matter if they were.