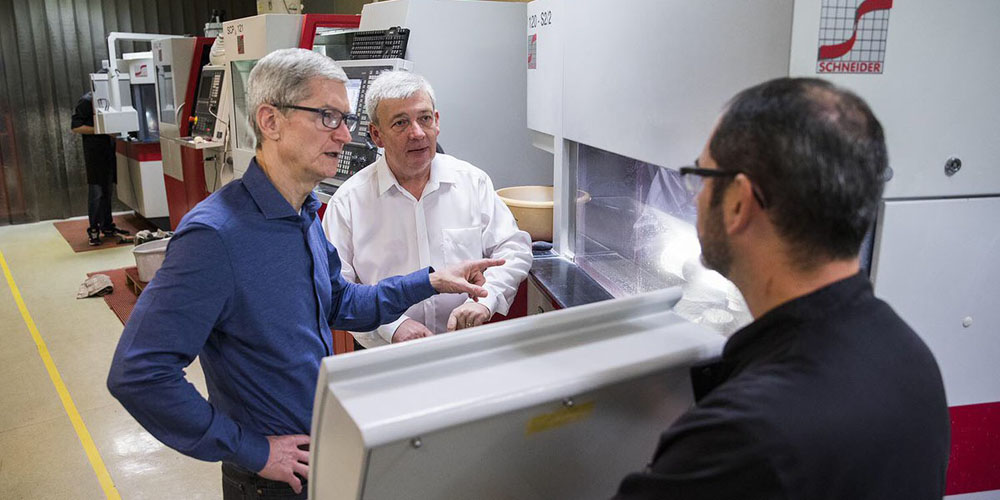 Update: More stops on his French tour below…

During a trip to France in which Tim Cook is scheduled to meet French president Emmanuel Macron, the CEO also visited a small French company whose technology is reported to be key to Face ID.

Cook tweeted a photo of himself at the company, thanking the small team of 42 employees for helping to make the iPhone possible …

Thanks to my friends at Eldim, a team of talented engineers and craftspeople helping make iPhone possible. Bravo pour votre travail! [Congratulations on your work]

VentureBeat explained the importance of the company’s work to the iPhone X.

Eldim, based near the Normandy town of Caen, has been making various types of display technology for more than 30 years. More recently, this has evolved into making components that allow for “optical analysis of angular characteristics.” Apparently, a version of this technology is one of the critical components being used in the new Face ID system for the iPhone X.

Eldim has reportedly been working with Apple for almost ten years, the company’s CEO enthusing about the partnership.

Eldim CEO Thierry Leroux told reporters that working with Apple was “an incredible adventure,” but added that there have also been huge technical challenges over the years. “For us, it was a little like sending someone to the moon,” Leroux told reporters. Cook responded, “It’s great what you have done for us.”

Cook’s meeting with Macron is expected to focus on taxation, Apple seeking tax reform to enable it to repatriate cash from overseas countries while the French president is one of several EU leaders seeking to make it harder for tech giants to avoid paying tax in Europe. Should be an interesting discussion …

Cook has also paid his respects at the American Cemetery in Normandy, and visited MyLittleParis, a startup that evolved from a small what-to-see newsletter into a hugely successful app.

Thrilled to meet this team of entrepreneurs @my_little_paris, whose success is born from creativity and passion. pic.twitter.com/kQ18e3Zghe

Next stop was to CoachGuitar, an app that uses colors to help people learn to play the instrument. Cook tweets that he was very impressed by the experience.

Très impressionné par l’expérience @CoachGuitar. Congratulations on 6M downloads! We can’t wait to see what you do next. pic.twitter.com/O7RIjusuzh