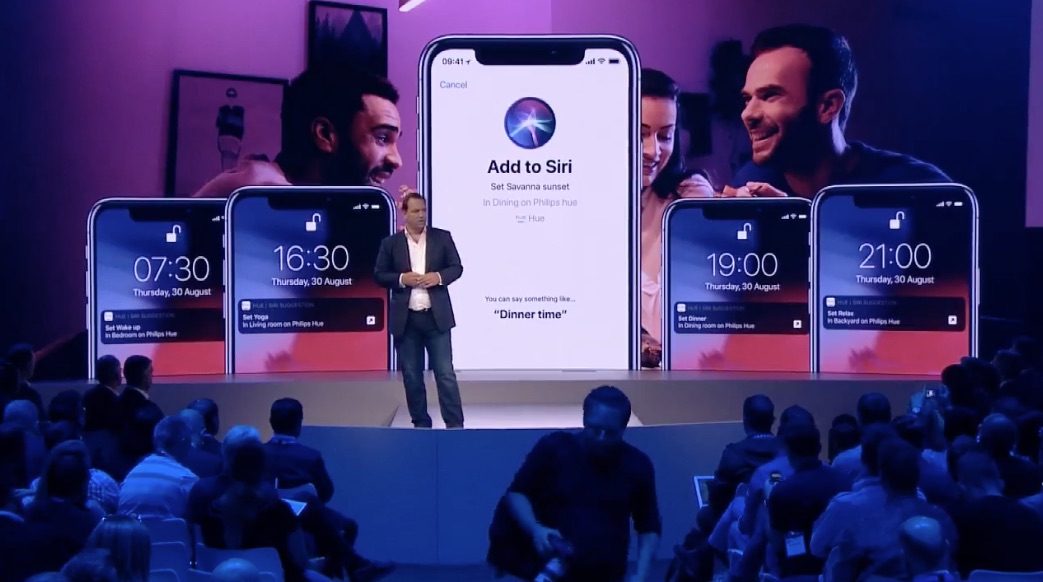 Philips announced today at IFA 2018 in Berlin that it will update the Hue app for iOS with support for Siri Shortcuts. With Siri Shortcuts integration, Hue users will be able to further customize their Shortcuts to include Hue-specific lighting settings.

As reported by iCulture, this means users will not need to use the Home app to control their Hue lights via Siri. Further, Hue lights will be able to directly integrate into Siri Shortcuts similar to how HomeKit also integrates with Shortcuts.

For instance, Philips demonstrated that a “dinner time” shortcut would include setting Hue lights to the ‘Savannah Sunset’ scene, which is a default scene included in the Hue application. Siri Shortcuts will also be able to make suggestions for Hue lighting, such as setting the theme to “Yoga” or “Relax.”

Through Siri Shortcuts, Hue will be able to interact with other apps and services, as well. For instance, the “dinner time” shortcut could also play music, enable ‘Do Not Disturb,’ and more.

In addition to Siri Shortcuts integration, Philips also announced a new power feature for Hue products that will ensure lights always return to their pre-set scenes after power is disconnected.

Siri Shortcuts is currently in beta testing and is slated to launch to the public with iOS 12 next month. Shortcuts is a byproduct of Apple acquisition of the popular Workflow application, and is highly customizable. Integration with third-party apps like Hue – even though much of the functionality is able to be replicated via the Home app – is a big selling point of the Shortcuts app.

Are you excited to give Siri Shortcuts a try next month? What sort of shortcuts to you plan to setup? Let us know down in the comments!