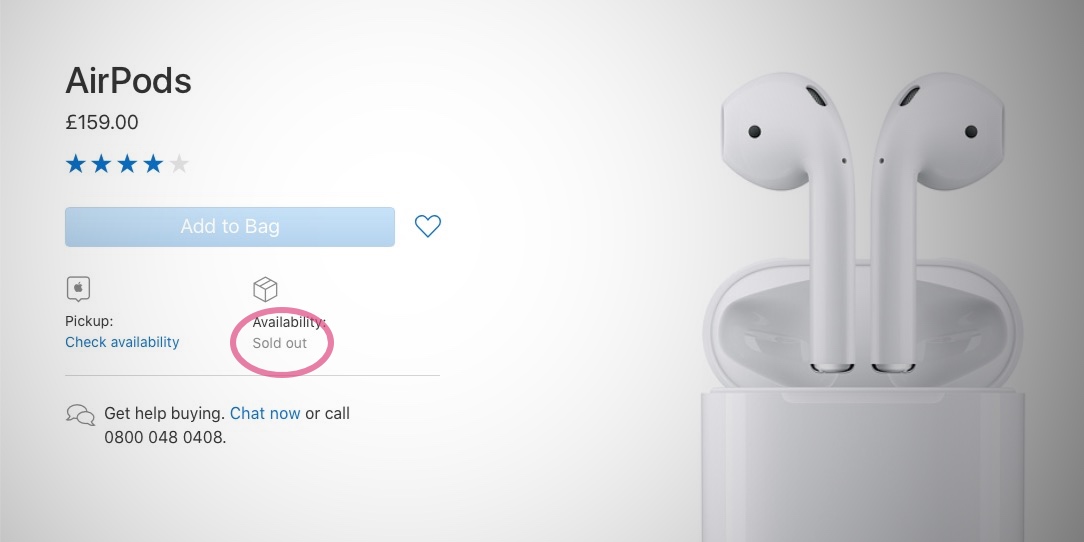 Update: The AirPods are now back in stock with regular delivery estimates. Panic over!.

Amidst rising expectations for another Apple event, readers have noticed that Apple AirPods have gone out of stock across Apple Stores in Europe. The online Apple stores for the UK, France, Germany, Spain and many other European countries are all reporting that AirPods are ‘Out of Stock’, despite having availability just a couple of hours ago.

AirPods are unlikely to be getting a major revamp until next year, but Apple did promise that it would start shipping a wireless charging case for AirPods by the end of 2018 …

Earlier today, AirPods were in plentiful stock almost everywhere. In a short span of a couple of hours, they have gone out of stock across Europe according to Apple’s website. That is strange. Apple’s US store is still listing them as ‘In Stock’ with immediate delivery.

There have been plenty of rumours about a so-called second-generation of AirPods, with features like ‘Hey Siri’ integration, better sweat and water resistance, and longer battery life.

However, most sources now agree that ‘AirPods 2’ are not to be expected until well into 2019. Apple might even debut them as a higher-priced ‘pro’-ish model, alongside the rumored over-ear headphones; think an Apple-branded take on the Beats Studio 3.

In terms of what to expect for the last few months of this year, a major AirPods hardware is not likely to be in the wings.

Alongside the infamous AirPower ‘2018’ pronouncement at the iPhone X event in September 2017, Apple announced it would offer a wireless charging case for AirPods. The idea being that this would enable compatibility with the AirPower mat, so a user can simply drop their AirPods-in-new-case on the mat and have it charge wirelessly. 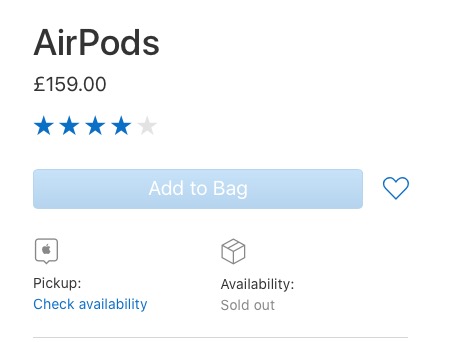 Who knows whether AirPower is imminent — definitely mixed signals on that one and Apple PR won’t say anything about its status. Assuming the wireless charging case is Qi-compatible however, Apple could start shipping that any day now.

This would be a nice minor improvement to the AirPods for the holiday season. New buyers would get the two earbuds and the new wireless charging case; existing AirPods owners could upgrade to get the new case if they felt so inclined.

This is our best explanation for a sudden stock shortage. It’s also sort-of wishful thinking. It’s probably equally likely that this stock blip is really just a temporary inventory issue with the website.