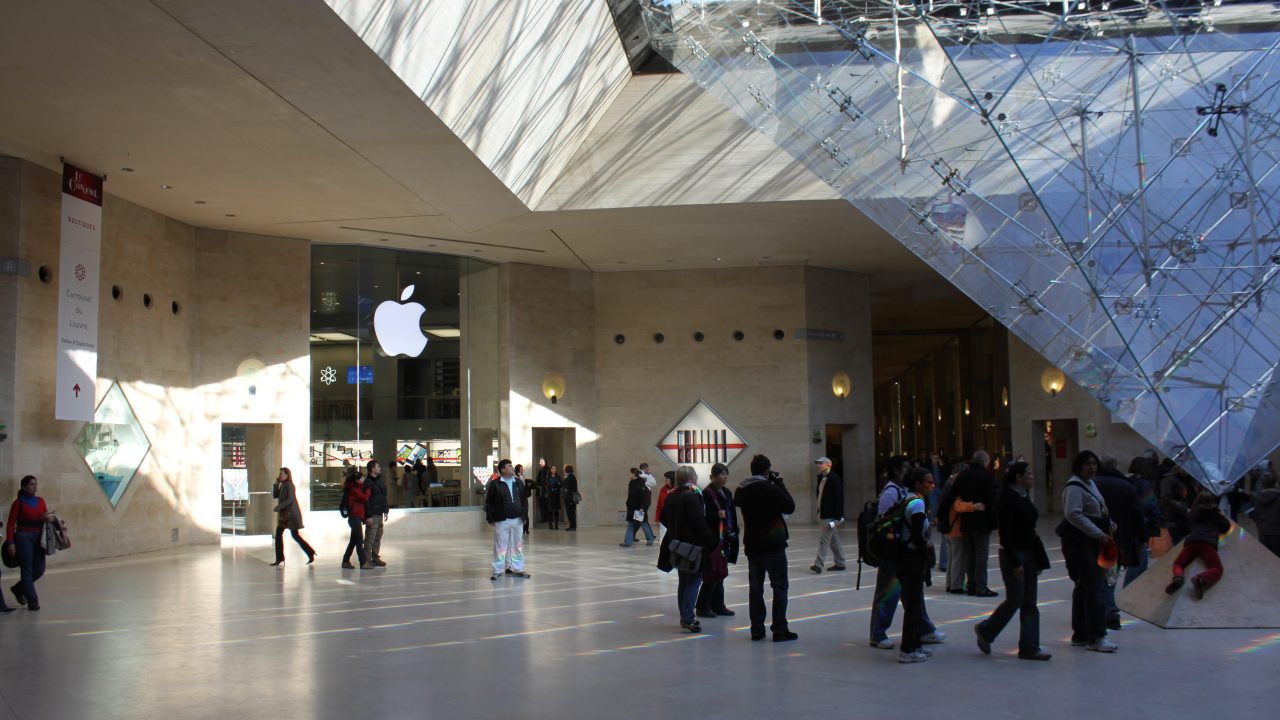 It’s a bittersweet time for Apple fans in Paris. Apple Carrousel du Louvre, the company’s first retail store in France, just closed permanently after nine years of service and just two days of iPhone XR sales. While the announcement came as a disappointment to Parisian tourists and locals, a new store experience is just around the corner. In the meantime, we’ve taken a nostalgic look back to remember the famous store’s history.

While Apple’s earliest stores opened in the United States in 2001, France didn’t receive its first location until 2009. Rumors circulated for years about where Apple might build. In June 2008, Apple finally confirmed it would construct a two-story store in the Carrousel du Louvre shopping mall near the famous Louvre Museum.

The store was located not directly under the Louvre Pyramid, but slightly to the west. Its stone entrance faced La Pyramide Inversée, a glass skylight that appears to defy gravity. The design was created by architect I.M. Pei who also famously devised the “floating” staircase used at the former NeXT Computer headquarters in Redwood City, CA. 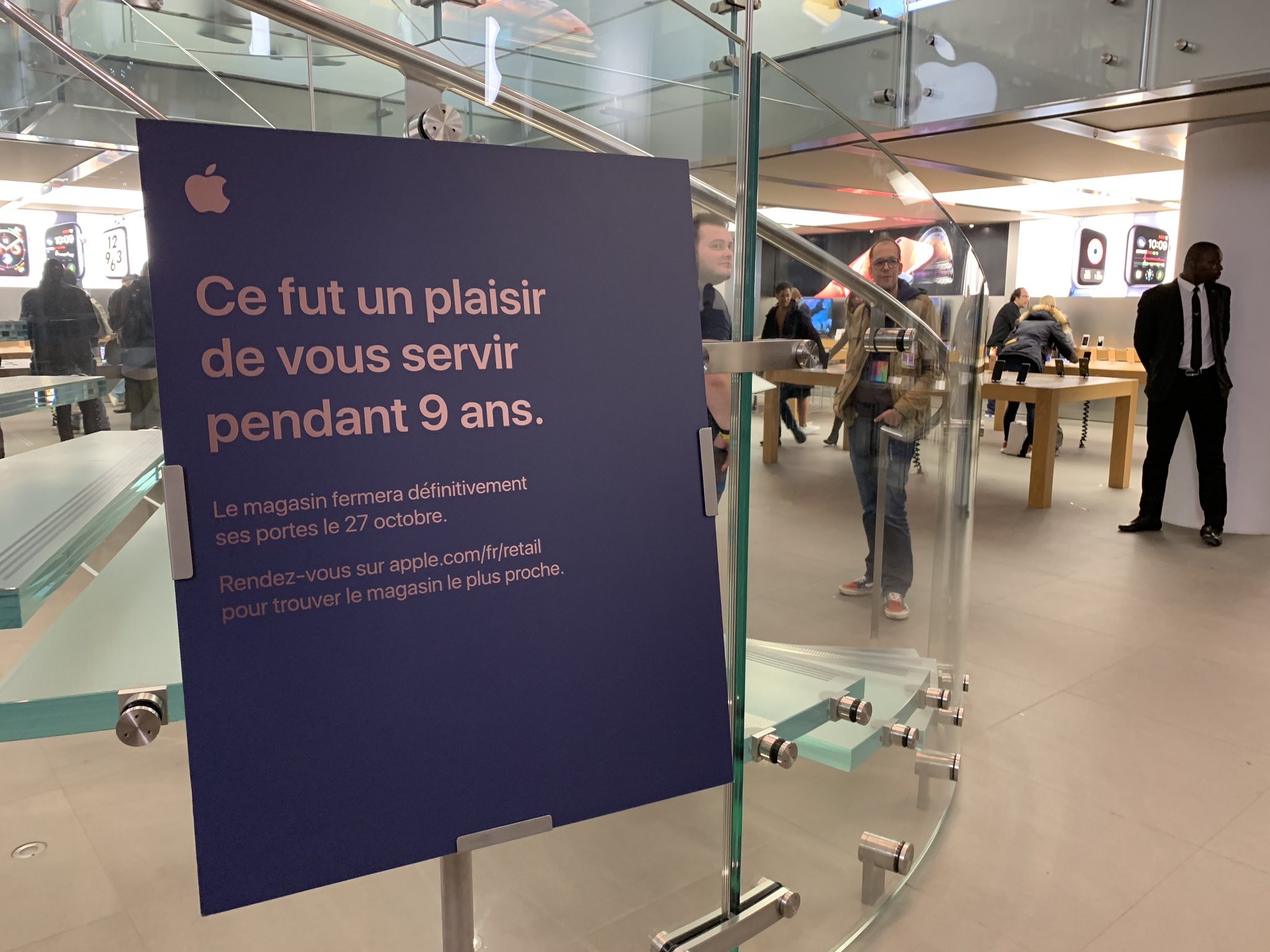 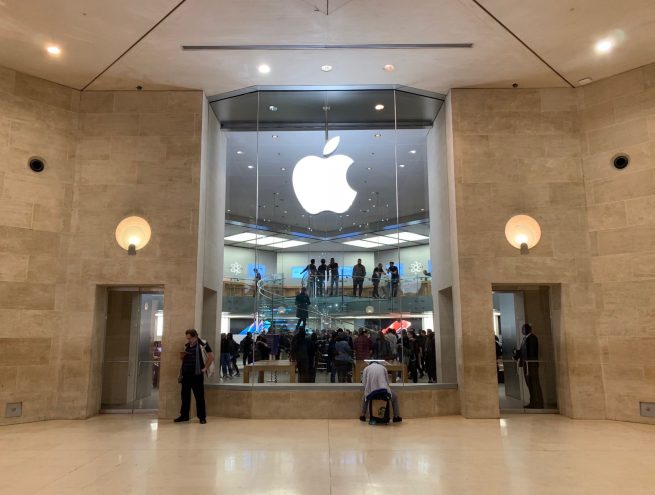 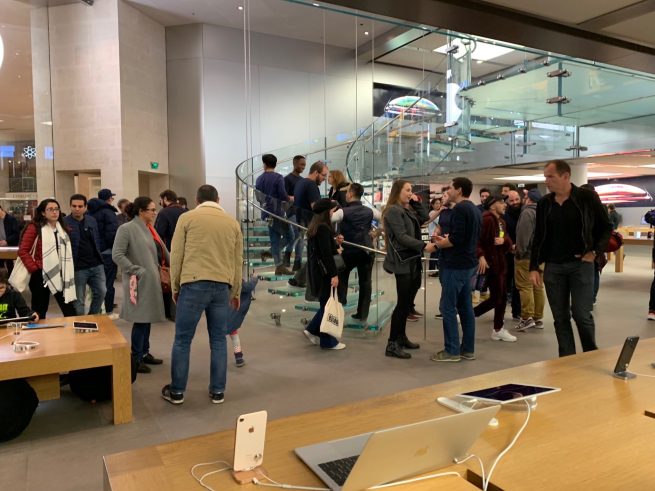 Like all major stores, Apple developed themed artwork for its Paris opening. In 2009, the fifth-generation iPod nano was a hot product, and Apple incorporated its colors and click wheel into the look of the store’s imagery. Large banners paying homage to the inverted pyramid’s design was placed over the store’s windows to announce its arrival. Pyramid theming even extended to the souvenir shirts given away to early customers, each packaged in a pyramid-shaped box. 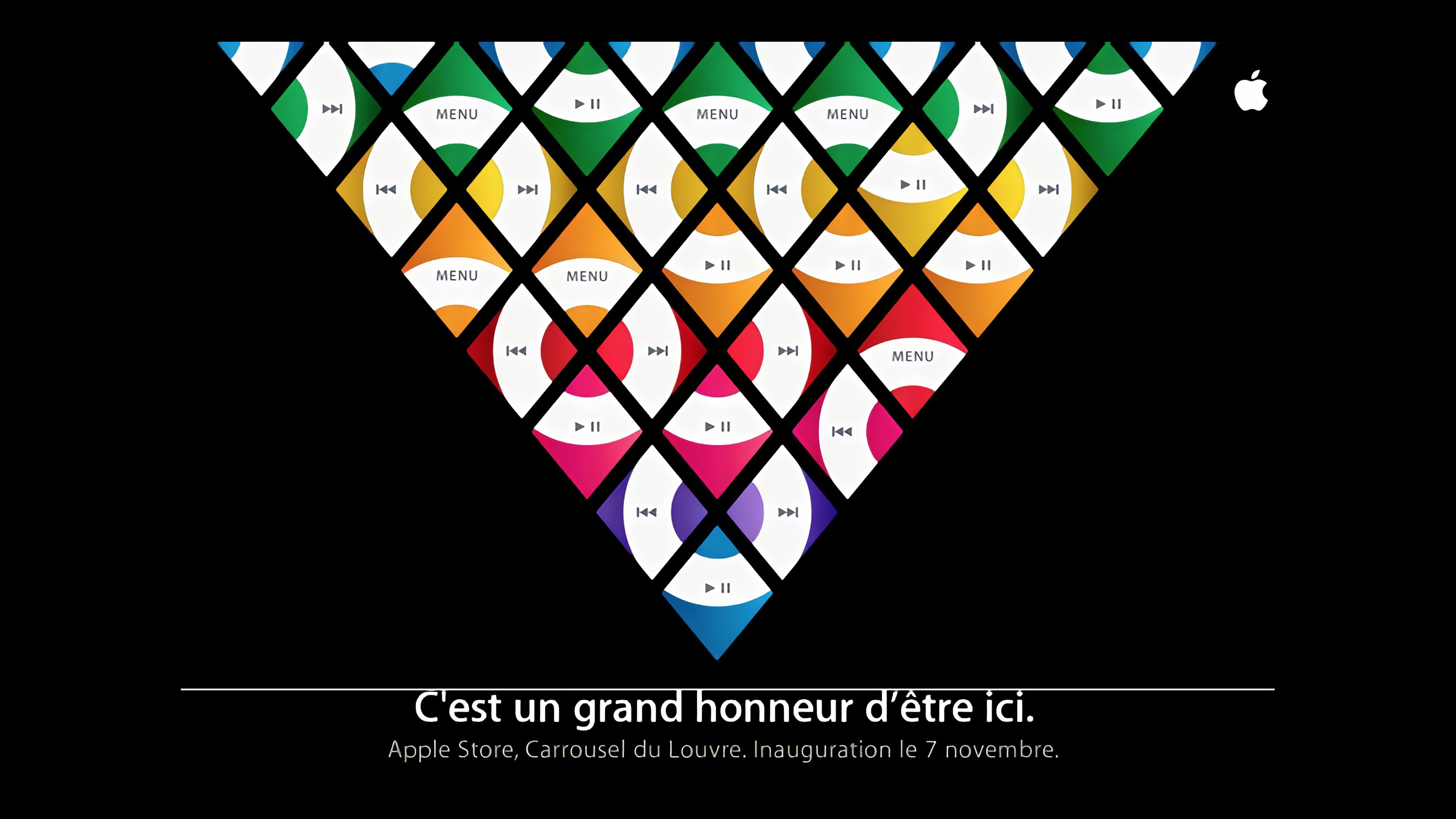 Apple Carrousel du Louvre opened on November 7, 2009 to hundreds of visitors waiting in line. According to Apple, 150 employees originally staffed the store. Some were assigned to a dedicated space for buying, activating, and configuring iPhones. Above the store’s spiral glass staircase, others were stationed at a unique Genius Bar, L-shaped to fit the room. Some original employees remained for all nine years are were present to clap out the store at closing.

For the grand opening, accessory maker Incase created a special Carrousel du Louvre Collection of cases including a messenger bag, 13” MacBook Pro sleeve, and an iPhone 3GS slider case. All three featured a blue and magenta pyramid pattern. The Louvre Museum’s first iPhone app was also released alongside the grand opening. Users could read information and view images of the museum’s highlights in a Cover Flow mode similar to the original iOS Music app. 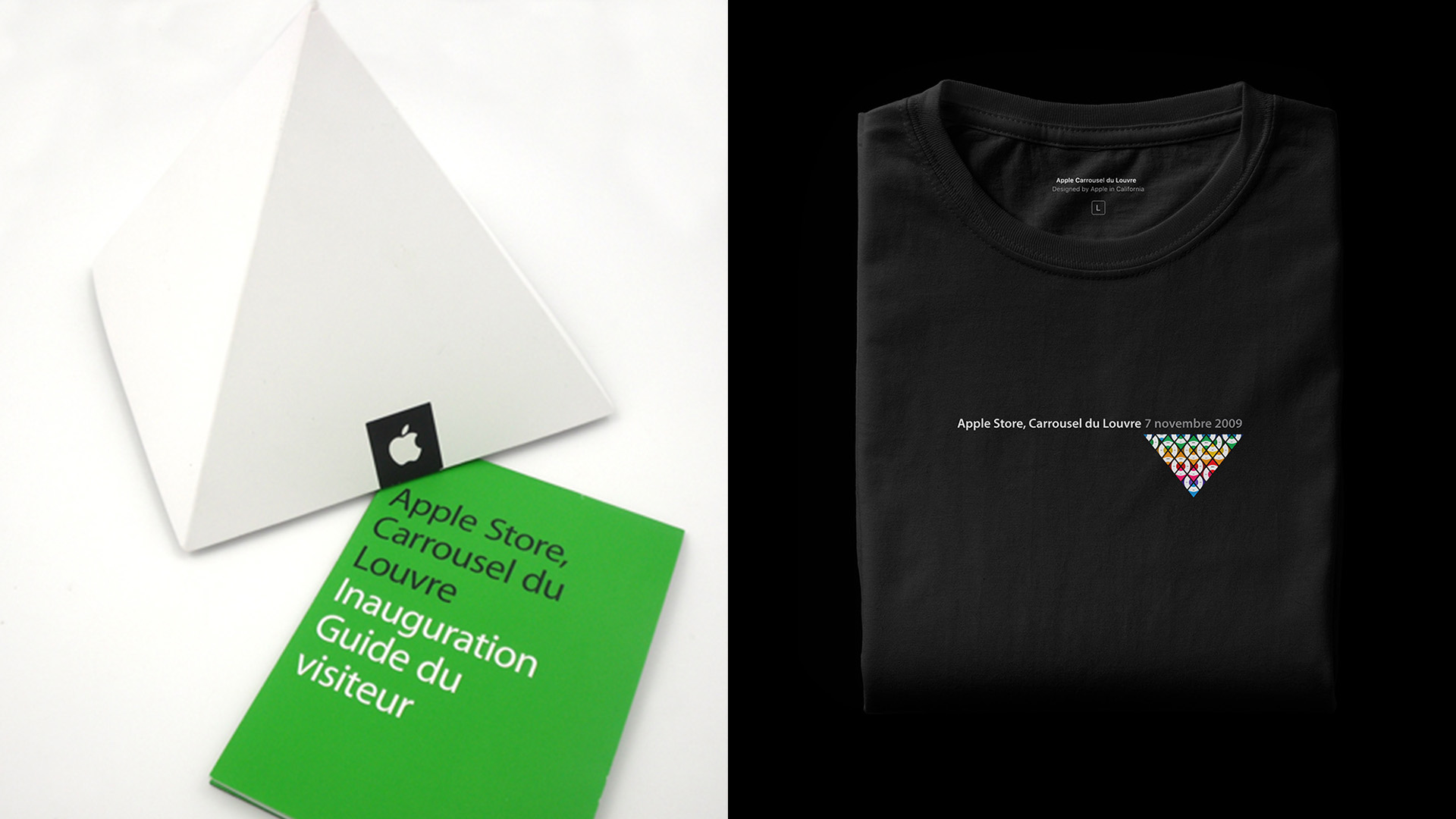 Aside from being Apple’s first store in France, the Louvre location was notable for several reasons. Apple piloted its iPod touch-based checkout system at the store, designed to modernize the purchase experience. Later, the Apple store app would gain EasyPay, allowing customers to buy accessories using just a personal iOS device. The Paris store was also one of a very limited selection to stock the original gold Apple Watch Edition at launch in 2015. In 2017, Tim Cook visited with customers and employees at the store during a trip to France.

In a media briefing shortly after the opening in Paris, former retail SVP Ron Johnson compared Apple Carrousel du Louvre’s significance to New York’s 5th Avenue glass cube store. At the time, Apple estimated that 40-50 new stores would open in the next year alone. Two days after the briefing, Apple Odysseum became the company’s second store in France, built in a commercial center in Montpellier. 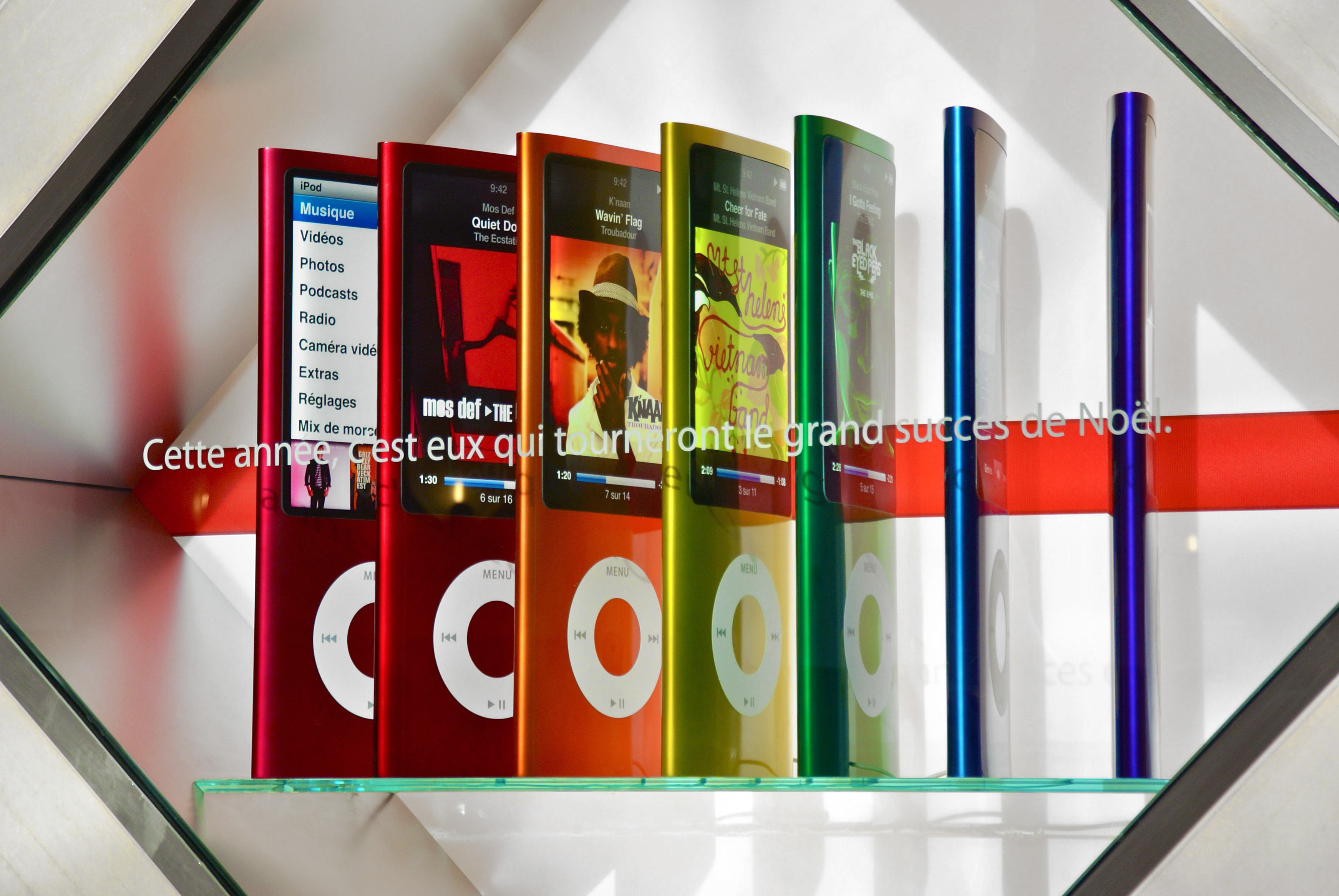 In the nine years since Apple’s French retail debut, the technology landscape has changed. The iPhone, iPad, and Apple Watch now dominate customer interest and table space. The very nature of retail has been questioned as sales and support continue to shift online. Carrousel du Louvre’s store could no longer offer the full experience customers have come to expect.

Creative and community themes will be the focus of Apple’s upcoming store on Champs-Élysées in Paris when it opens next month. For centuries, the famous avenue has been known for its shops and vibrant atmosphere. In the future, perhaps Apple’s new store will become just as iconic as its predecessor.