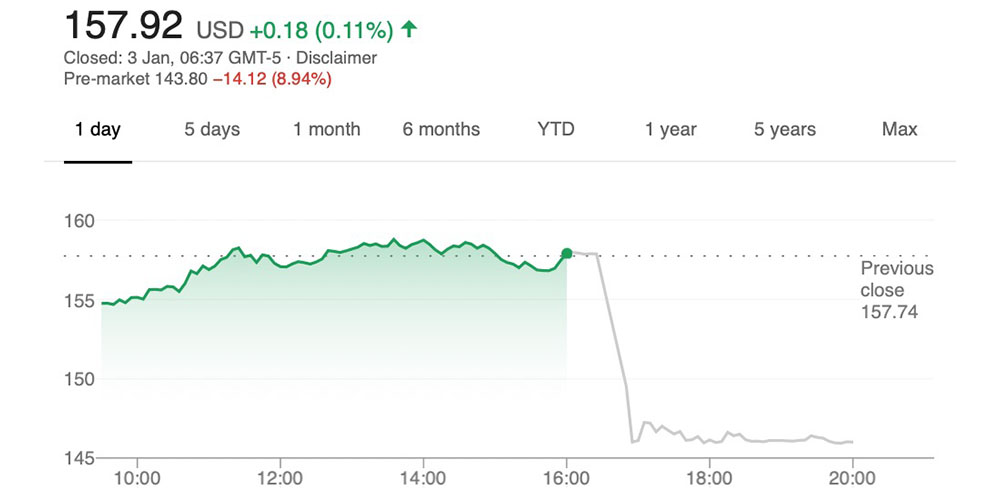 Apple’s shock earnings warning – the first time it has issued one since 2002 – has sent the stock price crashing in pre-market trading. At the time of writing, AAPL is almost 9% down on yesterday’s close.

Apple suppliers are also being hit hard, two of them even more badly than the iPhone maker …

Update: AAPL opened at $144, the lowest price since the middle of 2017. It relegates Apple to the fourth most valuable company, after Microsoft, Amazon and Google.

It follows a letter from Tim Cook warning investors that Apple expects to miss the low end of its fiscal Q1 guidance by $5B, and the high end by $9B. We summarized the four key takeaways from this letter yesterday.

While there have been multiple supply-chain reports suggesting that Apple was cutting iPhone orders, these are not always reliable, and the scale of the cut to guidance was a dramatic one.

Cook said that almost all of the missing revenue was in China, thanks to a combination of low economic growth in the country and tensions created by the Trump administration’s trade war with China.

While we anticipated some challenges in key emerging markets, we did not foresee the magnitude of the economic deceleration, particularly in Greater China. In fact, most of our revenue shortfall to our guidance, and over 100 percent of our year-over-year worldwide revenue decline, occurred in Greater China across iPhone, Mac and iPad.

China’s economy began to slow in the second half of 2018. The government-reported GDP growth during the September quarter was the second lowest in the last 25 years. We believe the economic environment in China has been further impacted by rising trade tensions with the United States.

One law firm suggests Apple misled investors previously about its performance in China.

He did, however, admit that iPhone sales were also weaker than expected in some developed markets. Cook argues that this was in part due to the $29 iPhone battery program.

It wasn’t just AAPL stock hit by the news: Business Insider reports that shares in major Apple suppliers are also taking a hammering. AMS, which makes Face ID sensors for Apple, took the brunt of the impact, losing 17% of its market cap overnight – but it wasn’t the only casualty.

Germany’s Infineon Technologies, which makes chips for the iPad, has dropped around 4.8%.

In the US, Advanced Micro Devices, a semiconductor company in California, slumped 3% in premarket trading. So-called FAANG peers (Facebook, Apple, Amazon, Netflix and Google) also slumped at least 1% each. Microsoft is down 2.1%.

Apple’s last earnings warning was in 2002. Daring Fireball noted that there was a big difference in the way this was issued. While that was an even bigger one percentage-wise, Steve Jobs issued a note comprising just two paragraphs.

Two paragraphs, under 200 words. Tim Cook’s “letter to investors” today was about 1,400 words. Part of this is just the nature of Apple being an industry titan blue chip today vs. being an outlier in 2002. The iPod was Mac-only in June 2002. And just look at the numbers: their 10 percent adjustment was just $200 million in revenue. Apple adjusted revenue today by about $7 billion (and that was only 7 percent — less on a percentage basis than the 2002 warning).

But man, delivering bad news was one area where Steve Jobs really shined in a way that Tim Cook just can’t. Look at the tight construction of that message from Apple in 2002. First paragraph: put out the numbers. Second paragraph: it’s an industry-wide problem, but Apple has “amazing new products” coming. And then the kicker, the dagger: “As one of the few companies currently making a profit in the PC business…”.

“We’ve got some short term bad news but don’t worry, we have this.”

John Gruber does acknowledge that there was no way Apple could get away with such a short response today, but suggests Apple’s earnings warning could have been more assertive in emphasizing that China is problematic right now but the iPhone continues to dominate the global market.

Apple is due to announce its fiscal Q1 (calendar Q4) results on January 29. Meantime, it is expected to hold an all-hands meeting today to discuss the issue with its employees.