A comprehensive guide to the modern furnishings of Apple Store Boardrooms 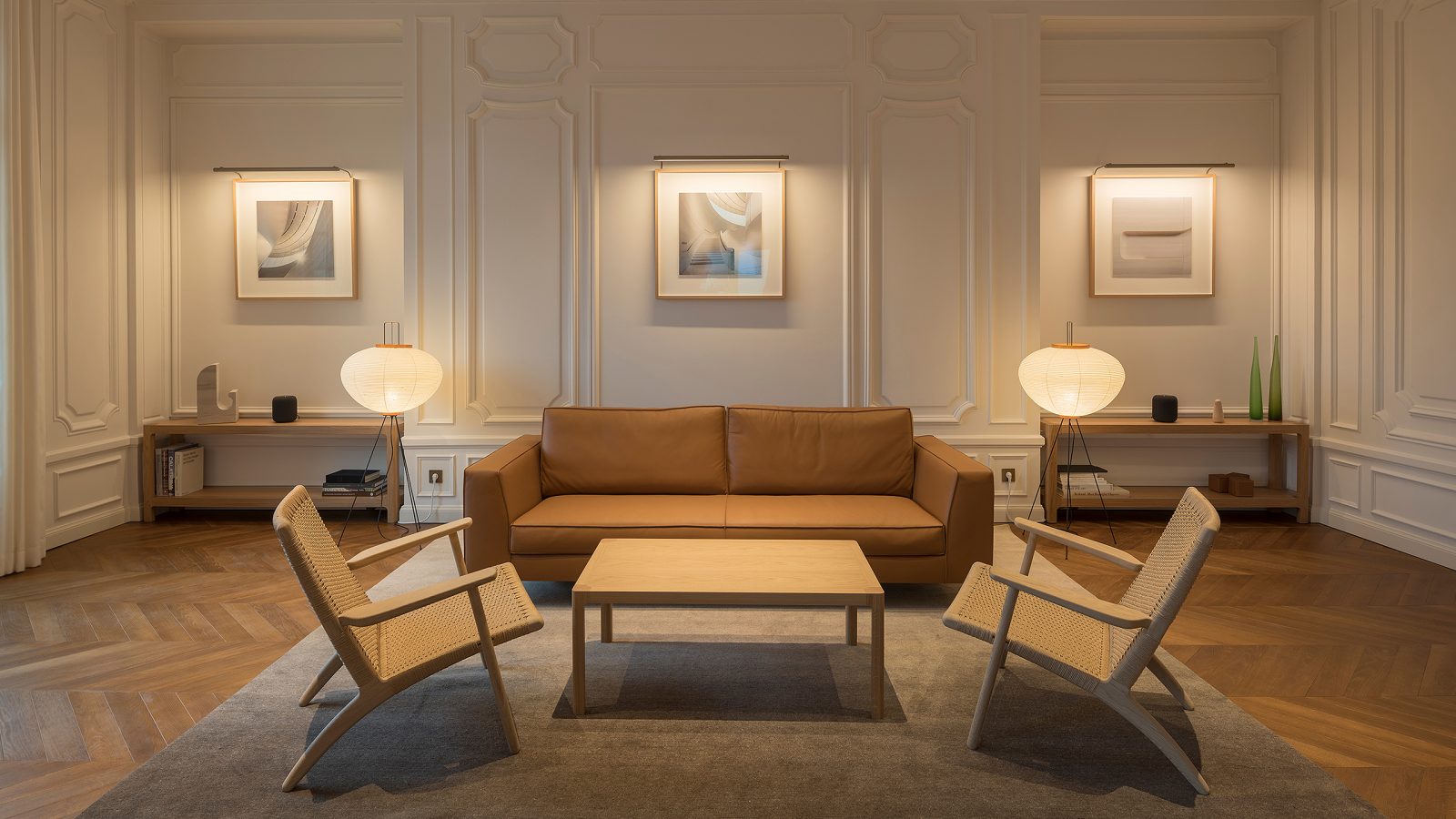 The iconic wood tables that fill every Apple Store have long been globally admired as symbols of tasteful interior design. Fewer people are aware that recent top Apple Stores contain a hidden space called the Boardroom. Each Boardroom is decorated with a collection of premium furniture and accessories from some of the most respected designers in the world. We tracked down these hard-to-find items to create a directory for those with a discerning eye for design.

Boardrooms aren’t a company secret but are generally closed to the public. Access is limited to business meetings, artists hosting Today at Apple sessions, and private events. Apple describes the Boardroom as a space more intimate than the main store area and flexible enough to showcase any business solution.

As of this article’s publication, there are roughly three dozen stores around the world either built with or remodeled to add a Boardroom. Former Retail SVP Angela Ahrendts formally announced the Boardroom concept in May 2016 when Apple Union Square opened in San Francisco. The design and furnishings of the spaces are directly inspired by Apple Park, meaning that each Boardroom brings a small taste of Cupertino with it. Accessories and furniture in each store vary based on age, size, and location. Most Boardrooms contain at least one item unique to the city or country the store is located in. 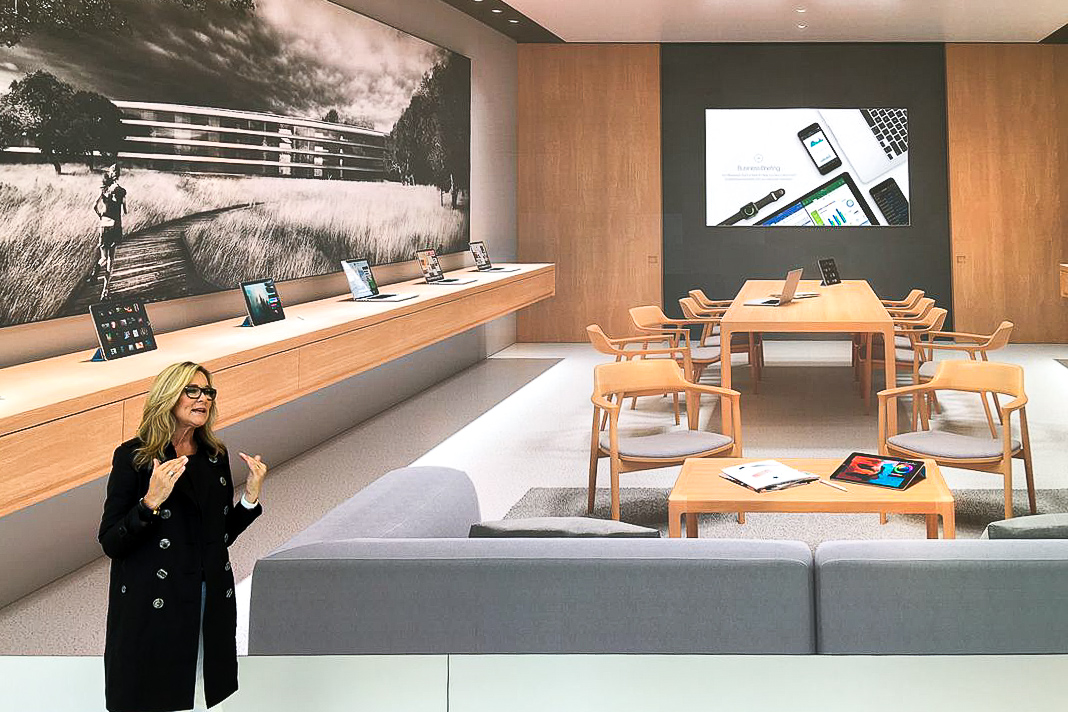 There is very little public documentation from Apple on the Boardroom, so I consulted with designers and representatives from several major suppliers of modern design products to catalog each space. In some cases, Apple fabricates its own furniture, meaning not every piece is available to the public. I’ve organized the items into multiple categories below. If you have additional information on any Boardroom products, drop me a line and I’ll update this article. 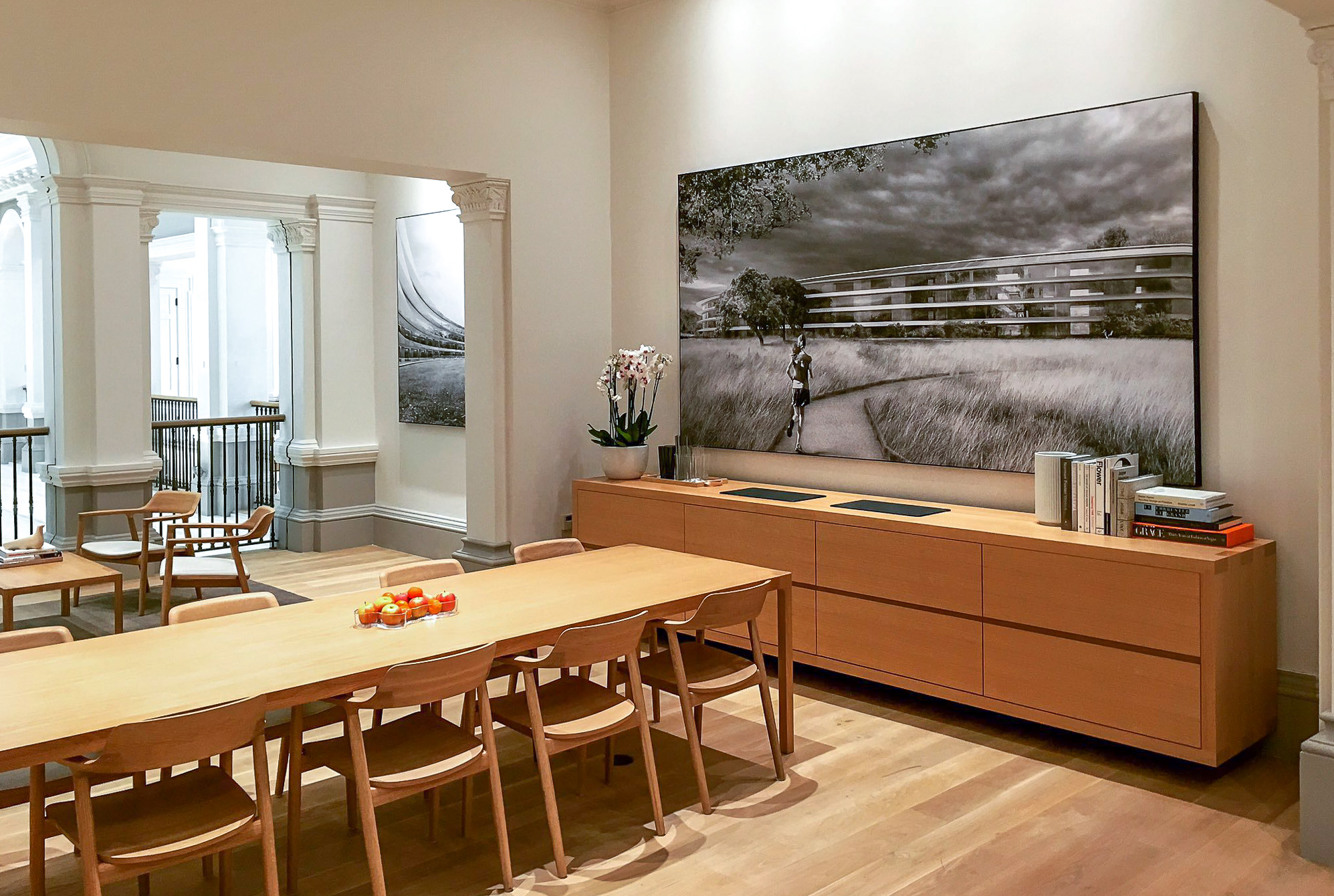 At the core of every store Boardroom is a set of Maruni’s Hiroshima Arm Chairs. Early Boardrooms used chairs with plain wooden seats, while more recent chairs are either upholstered with fabric or Apple’s favorite shade of brown leather. These distinctive chairs can also be found in the cafe at Apple Park Visitor Center. The Hiroshima line was designed by Naoto Fukasawa, a close friend of Jony Ive and the designer behind many popular Muji brand products. Ive and Fukasawa were recently interviewed together and reflected on the design of Apple Park.

Since late 2017, new Boardrooms contain a pair of Hans J. Wegner’s CH25 Lounge Chairs in oak made by Carl Hansen & Søn. The chairs are typically paired with a generous sofa upholstered with the same exact tone of brown leather used elsewhere in the Boardroom and throughout every Apple Store. I was unable to locate this specific model of sofa after scouring hundreds of online listings, and spokespeople from manufacturers representing a large percentage of the modern furniture market could not identify the piece as a product from any of their brands. The nearest matches I’ve found are the Risom 65 Sofa and Piero Lissoni’s Divina for Knoll. 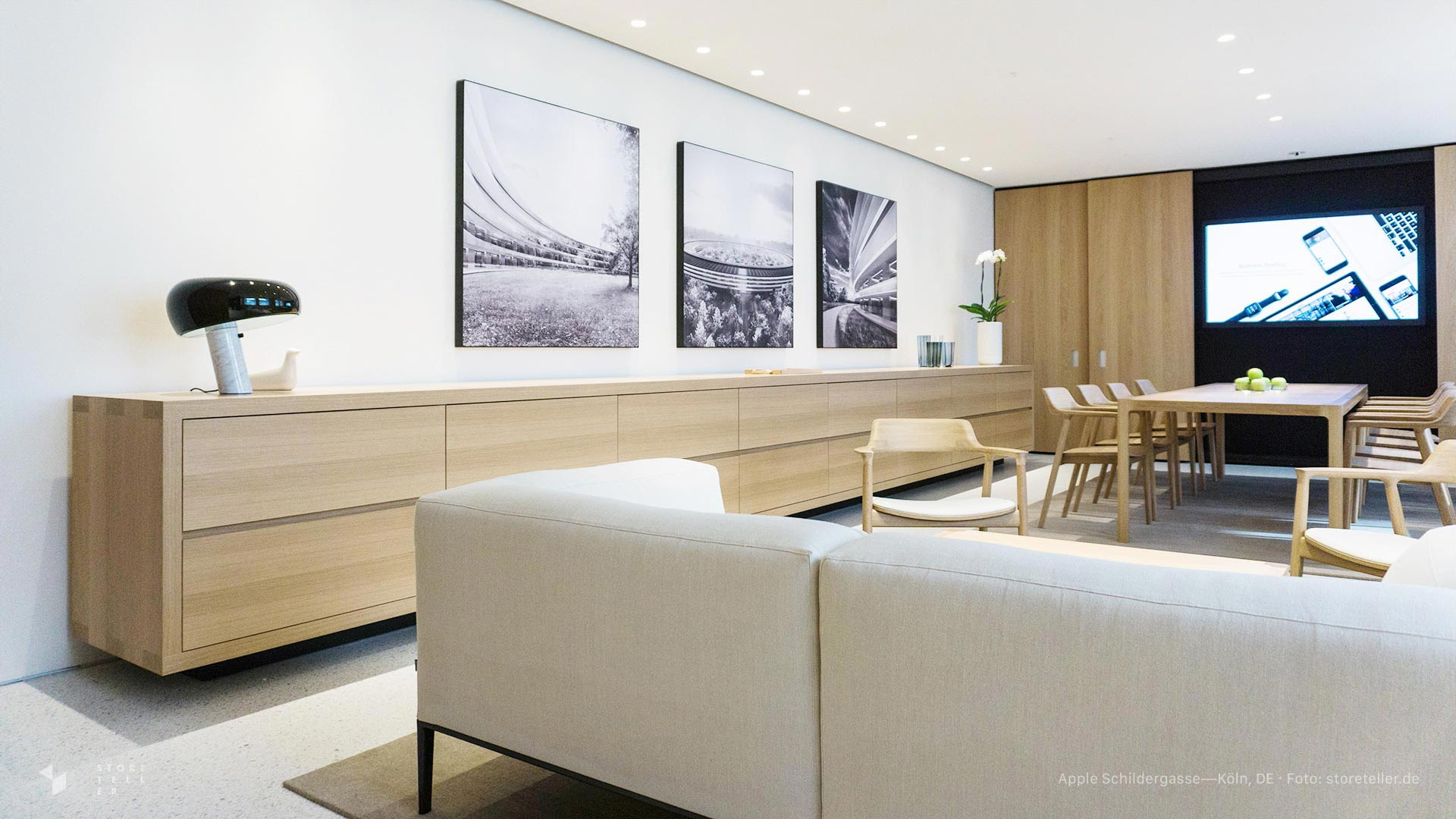 Early Boardrooms experimented with furnishings and materials, while more recent spaces have settled into a consistent pattern. A few older Boardroom locations including Apple Vía Santa Fe and Apple Schildergasse use a light tan cloth-upholstered sofa similar but not identical to Lissoni’s 191 Moov. One notable exception is Apple Mall of the Emirates, which featured a proto-Boardroom before the spaces were officially launched by Apple. The chairs along its walls are entirely custom and closely resemble the seating at Steve Jobs Theater. 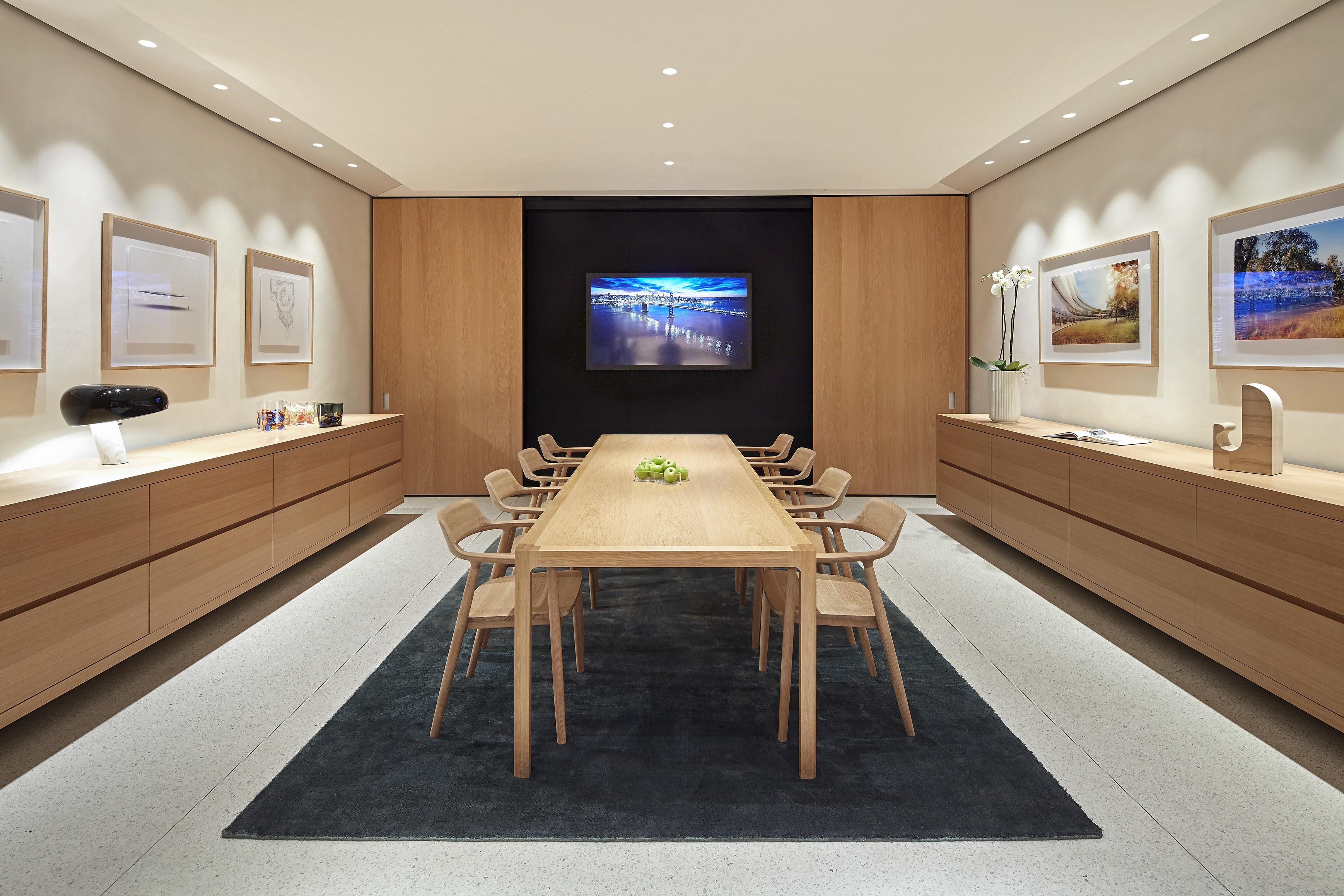 Though paired with a set of Hiroshima chairs, the main conference table in each Boardroom is not a Maruni product. Its design also differs from the Arco Essenza tables used at Apple Park Visitor Center’s cafe and in the early Boardroom at Apple Mall of the Emirates. Since June 2018, these conference tables have included the same integrated plug dots for charging devices that recent Apple Store tables use, indicating that these are custom pieces built only for Apple. The coffee tables, side tables, and shelving in each Boardroom are based on the same design style. 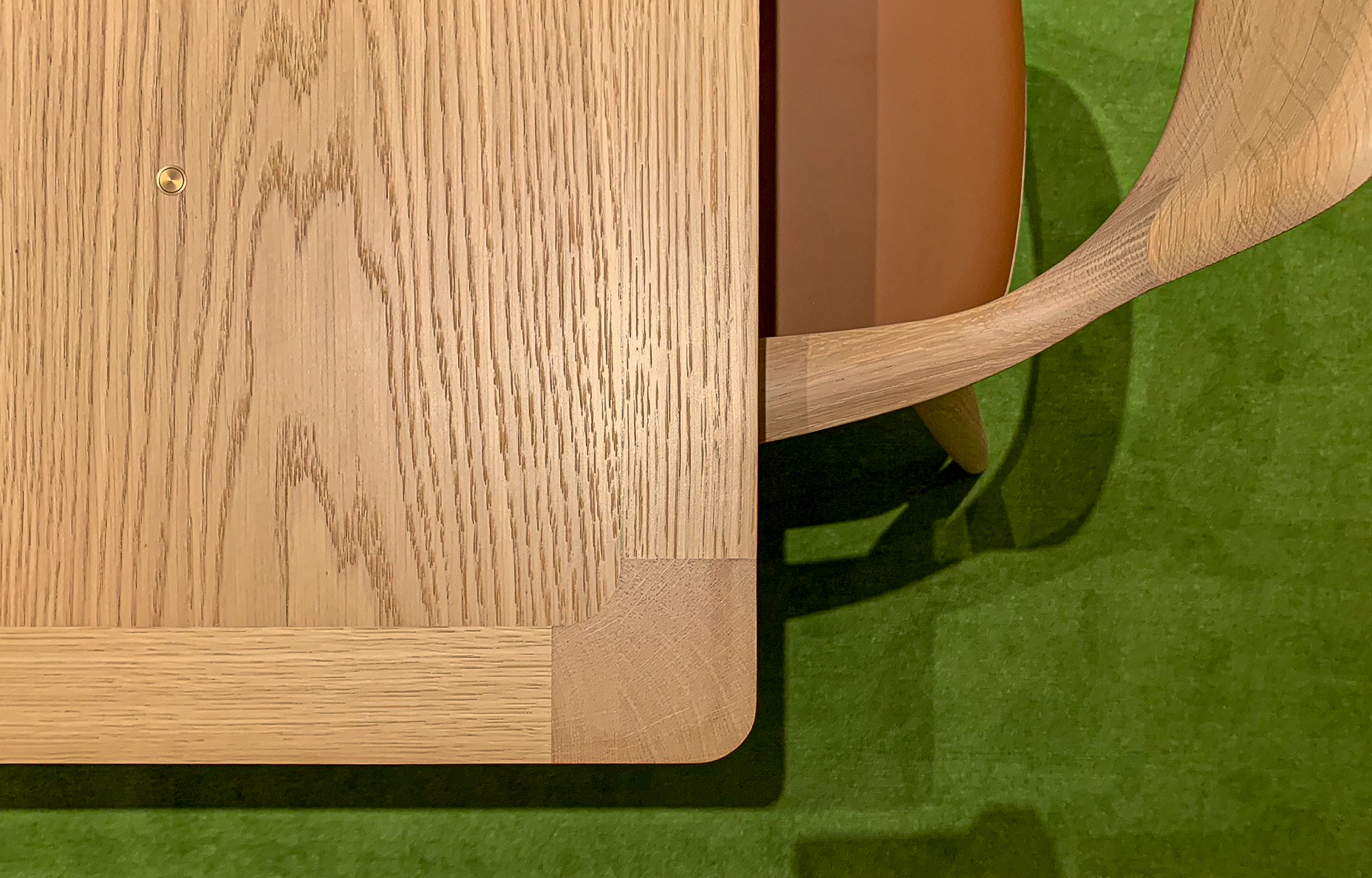 Boardrooms also feature one or more wall-mounted credenzas with a varying number of drawers based on the size of the room. Apple holds a patent on a credenza with a very similar design and a glass display top. Inside the credenza, drawers have been specially engineered to neatly house a collection of Apple’s entire line of portable products while they are charging. 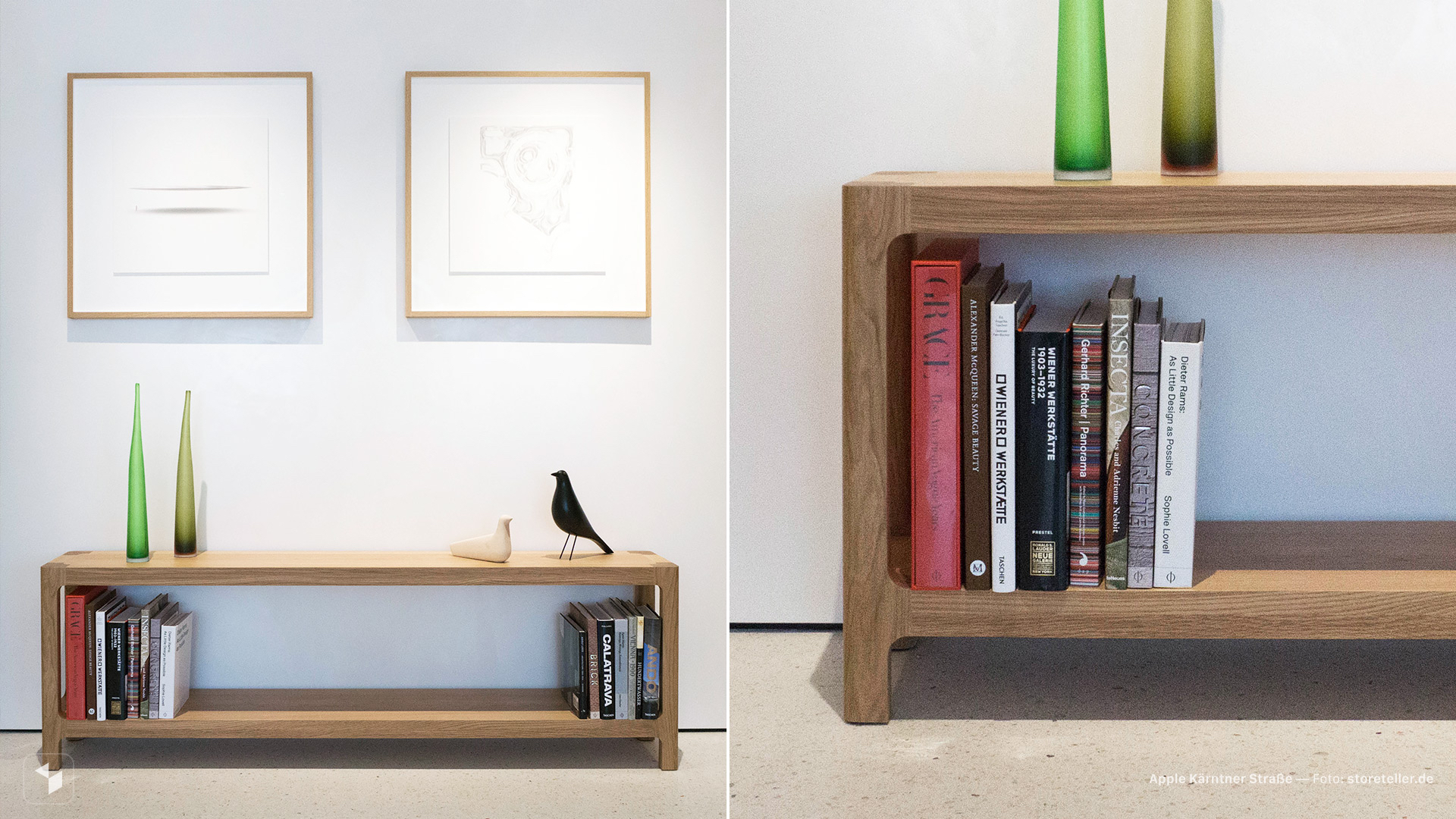 Placed on the credenza in most Boardrooms is one of two lamps: Achille Castiglioni’s Snoopy Table Lamp in black, or more recently Atollo glass by Vico Magistretti. Apple Champs-Élysées in Paris contains the only Boardroom to feature the Akari 10A by Isamu Nouchi, a floor lamp made in the style of Japanese paper lanterns.

Credenzas and conference tables are also outfitted with an assortment of decorative bowls and vases. Earlier stores often favored pieces from Iittala’s Alvar Aalto Collection in a variety of heights and colors. A planter filled with white orchids is another staple. Unlike most objects in the Boardroom, nearly every single store features a different style of planter. One of many is the Lyngby Vase from Lyngby Porcelain. Kristina Dam Design Studio’s bowls and the Ginter Planter Set are also similar to designs spotted in various Boardrooms. 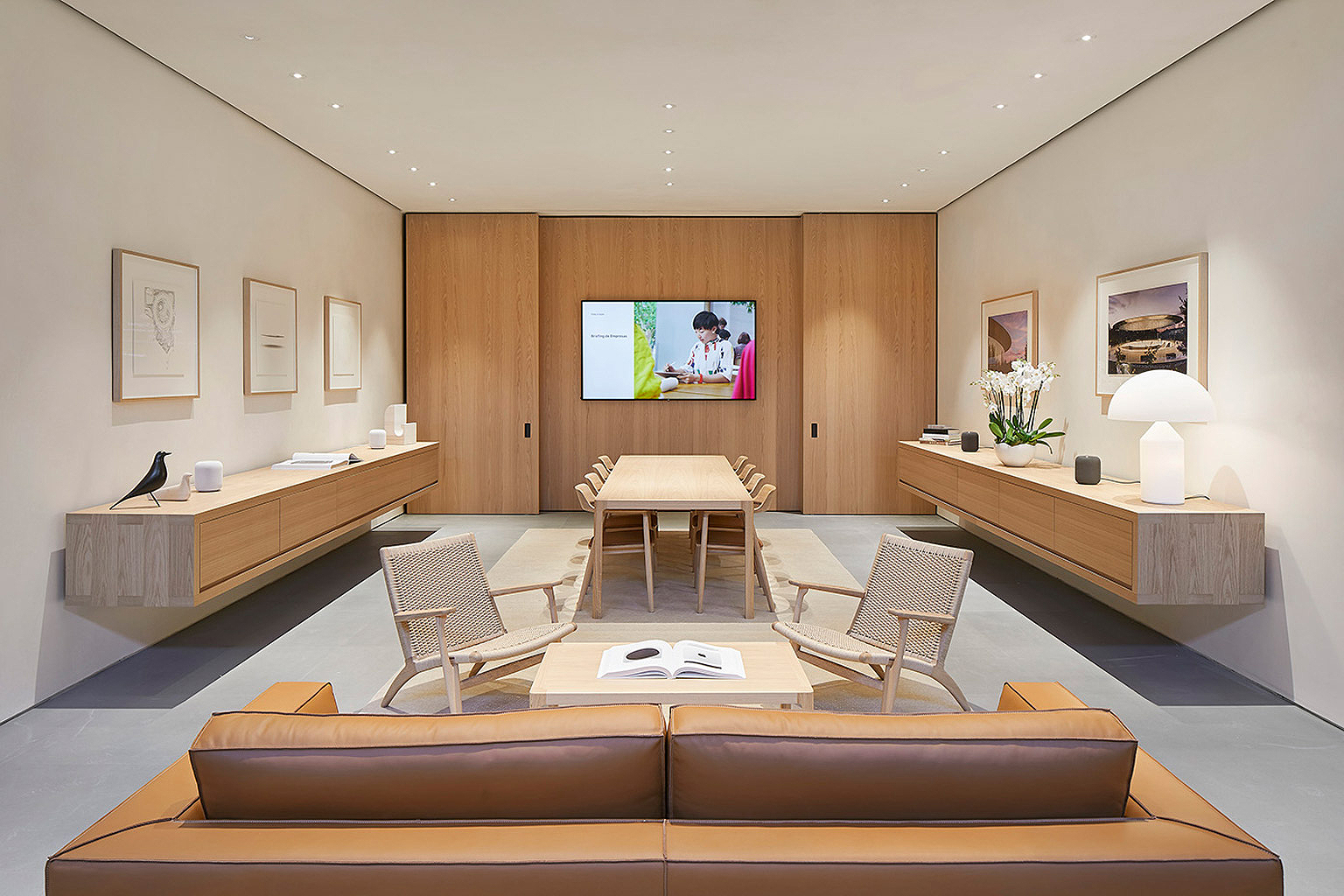 The rarest objects in Boardrooms are perhaps a set of blown glass vases designed by Laura de Santillana. Known as bambu and sold by Arcade Murano, the vases are a limited edition of 300 pieces, each one signed and numbered. While not an analog, 3 Green Bottles by Jasper Morrrison may be a more attainable alternative. 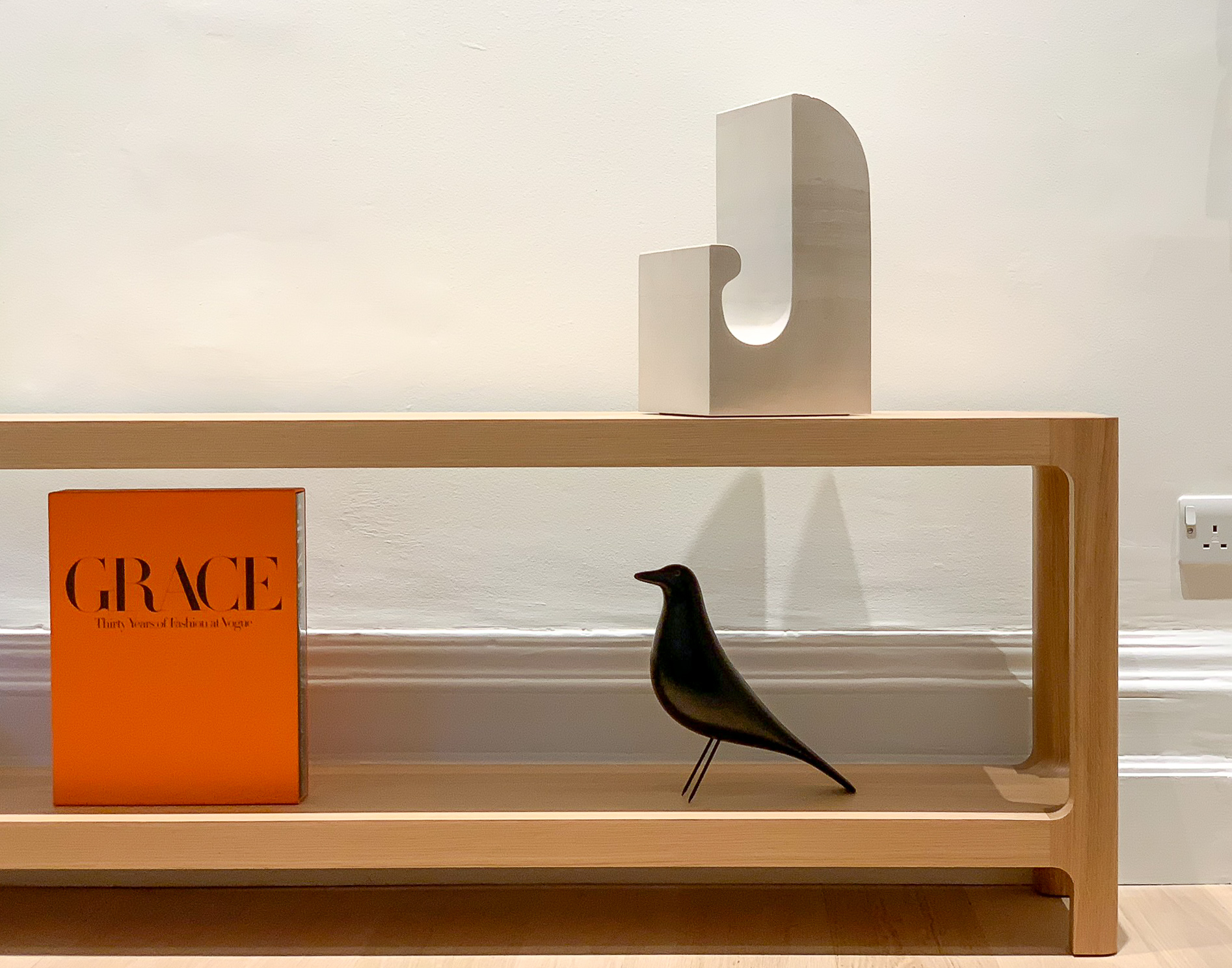 Apple adds a few extra accessories to each Boardroom as it sees fit. Area rugs are common under the conference table, typically dark gray, tan, or olive green. There are no visible markings on the rugs, but Design Within Reach and AllModern offer similar styles and colors. HomePods have been another staple since the product’s launch.

Some locations have a Norr Tray for holding drinks and glasses or a Kubus Bowl for decoration. Fans of mid-century design will instantly recognize Vitra’s Eames House Bird paired with a L’Oiseau wooden figure by Ronan & Erwan Bouroullec. Apple Piazza Liberty in Milan contains a one of a kind ceramic figure, Bisson, created by artist Elena Salmistraro as part of the store’s creative launch campaign. 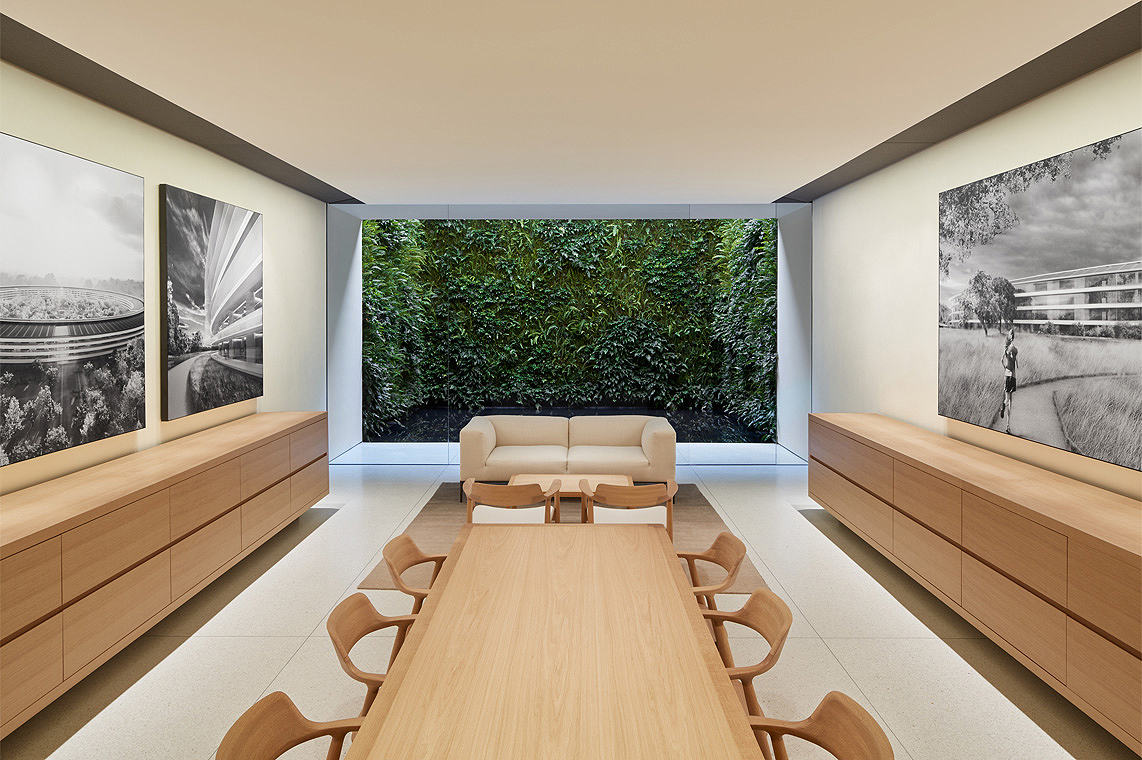 There are also a few Boardroom accessories you can’t buy. A wide variety of framed Apple Park prints decorate the walls in each location. The scenes vary by store but are often panoramic vistas of the main ring building in black and white or color as well as intricate blueprints of the campus design. Since Apple Regent Street, each store also contains a cutaway section of stone showing the design of Apple’s carved handrails found at Apple Park and several major stores. 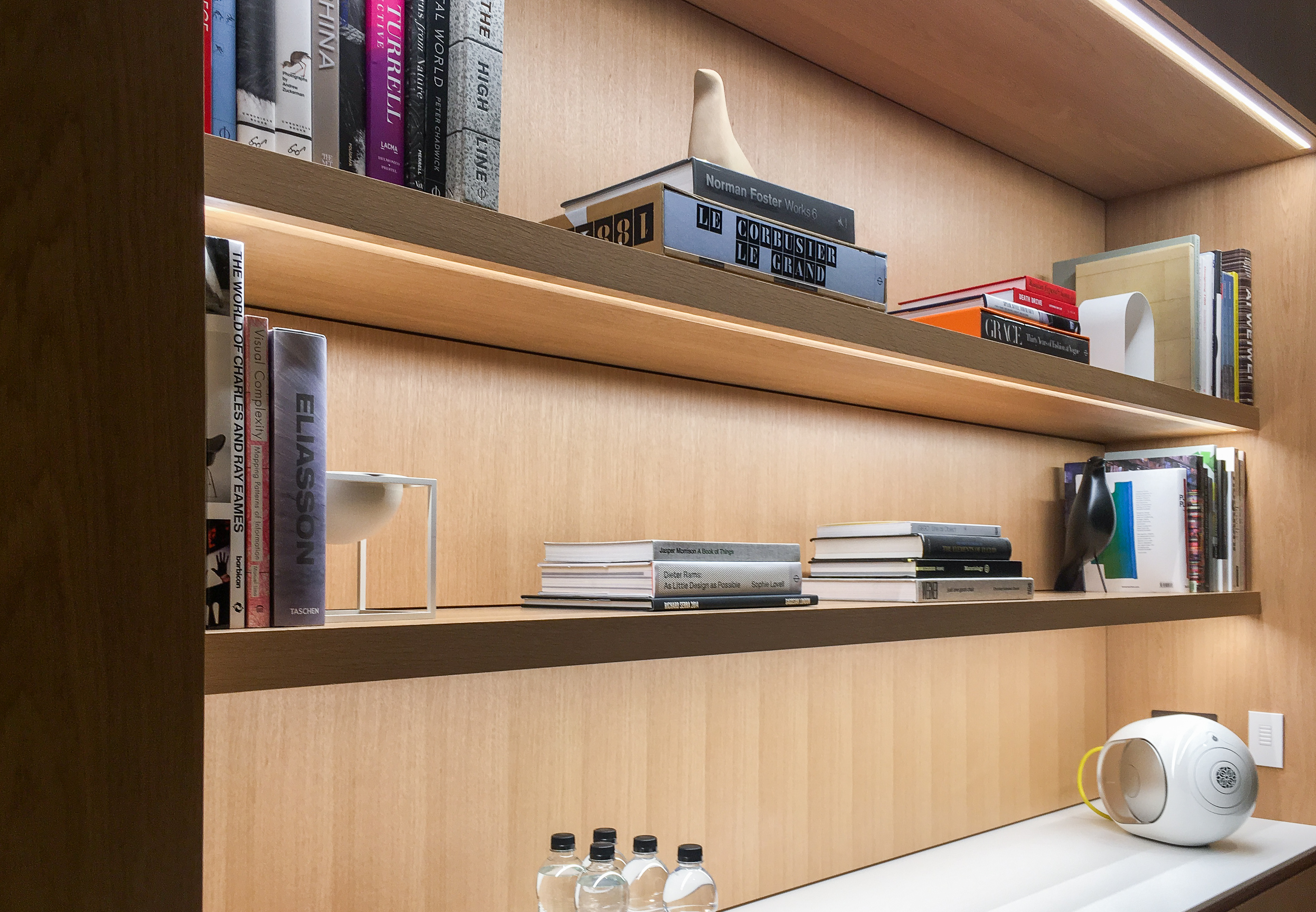 It’s hard to imagine much reading time is spent in Boardrooms, but Apple has assembled an impressive library of design and art literature for each store. Presumably, these selections are personal favorites of Apple’s design and retail teams. Books highlighting local design are included when appropriate. Here’s a list of books that have been spotted in various Boardrooms:

Inspired by the design of Boardrooms, Experience Rooms open the idea of a more personal store space to every customer. Apple’s goal was to create an ideal setting for listening to music on HomePods, watching Apple TV, or trying out AirPods. As of this article’s publication, only Apple Champs-Élysées in Paris and Apple Carnegie Library in Washington, D.C. feature Experience Rooms. While both locations contain largely the same furnishings as the latest Boardrooms, each has a few unique pieces as well. 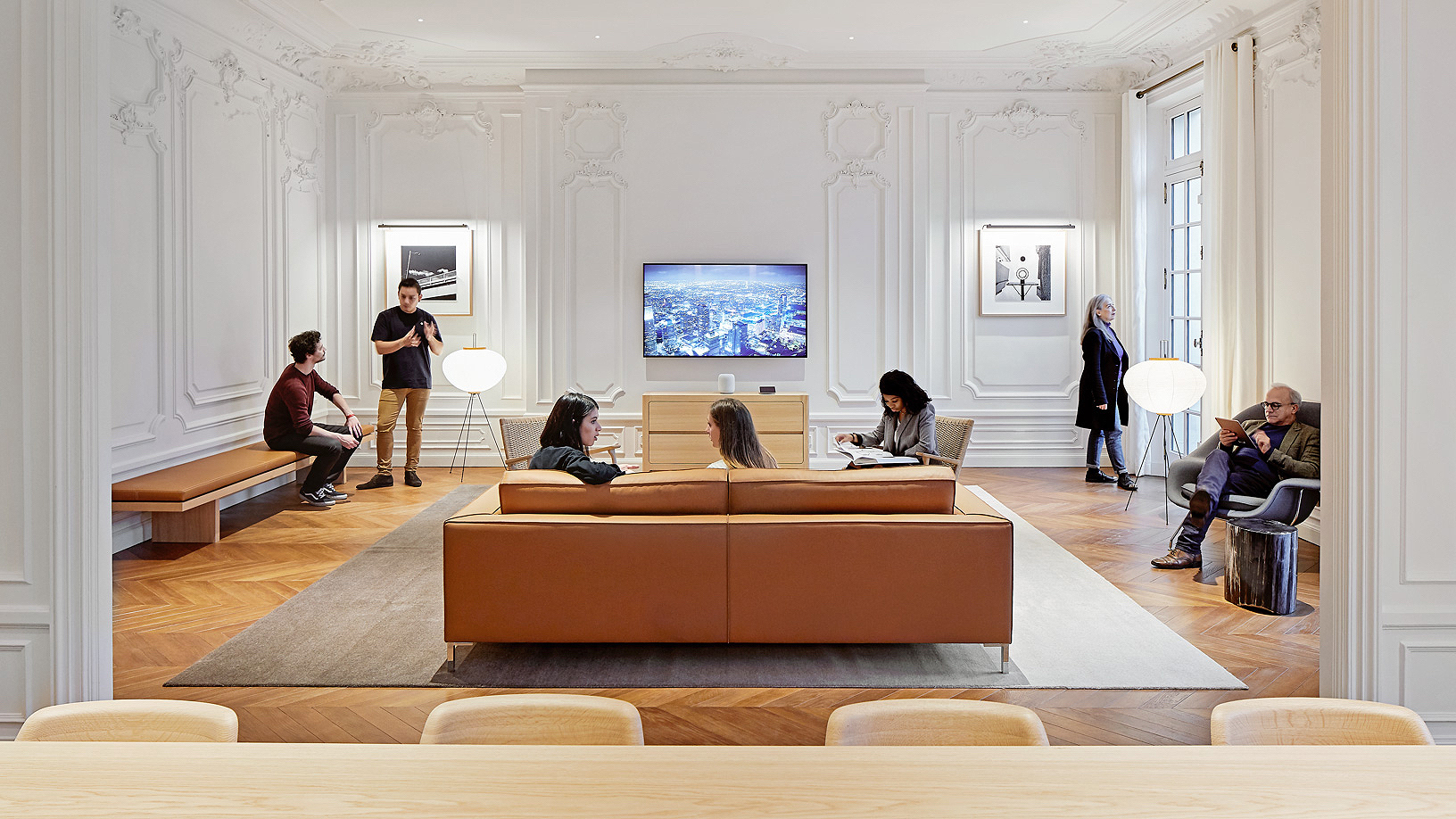 At Apple Champs-Élysées in Paris, two gray Eero Saarinen Womb Chairs are nestled next to a window. A High Quality Petrified Wood Side Table from Andrianna Shamaris has been positioned between the chairs. The Akari 10A floor lamp makes another appearance here. Instead of Apple Park prints, black and white photographs of famous French cities from photographer Axel Morin line the walls.

At Apple Carnegie Library in Washington, D.C., Apple Park prints have again been replaced, this time with historic floorplans of the Carnegie Library. A marble-topped Eero Saarinen Side Table was added. D.C.’s Experience Room also has a few books relevant to local design and architecture: 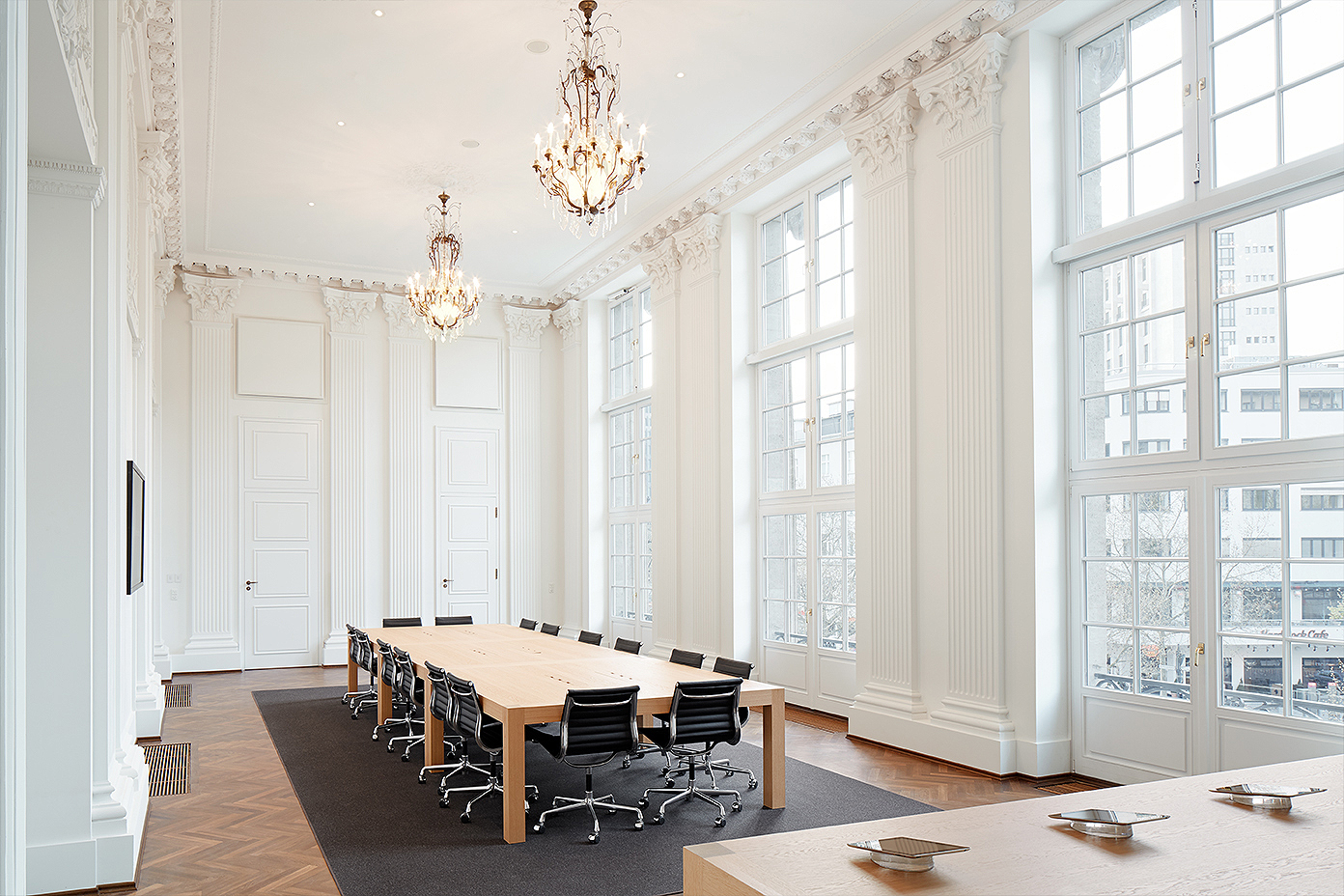 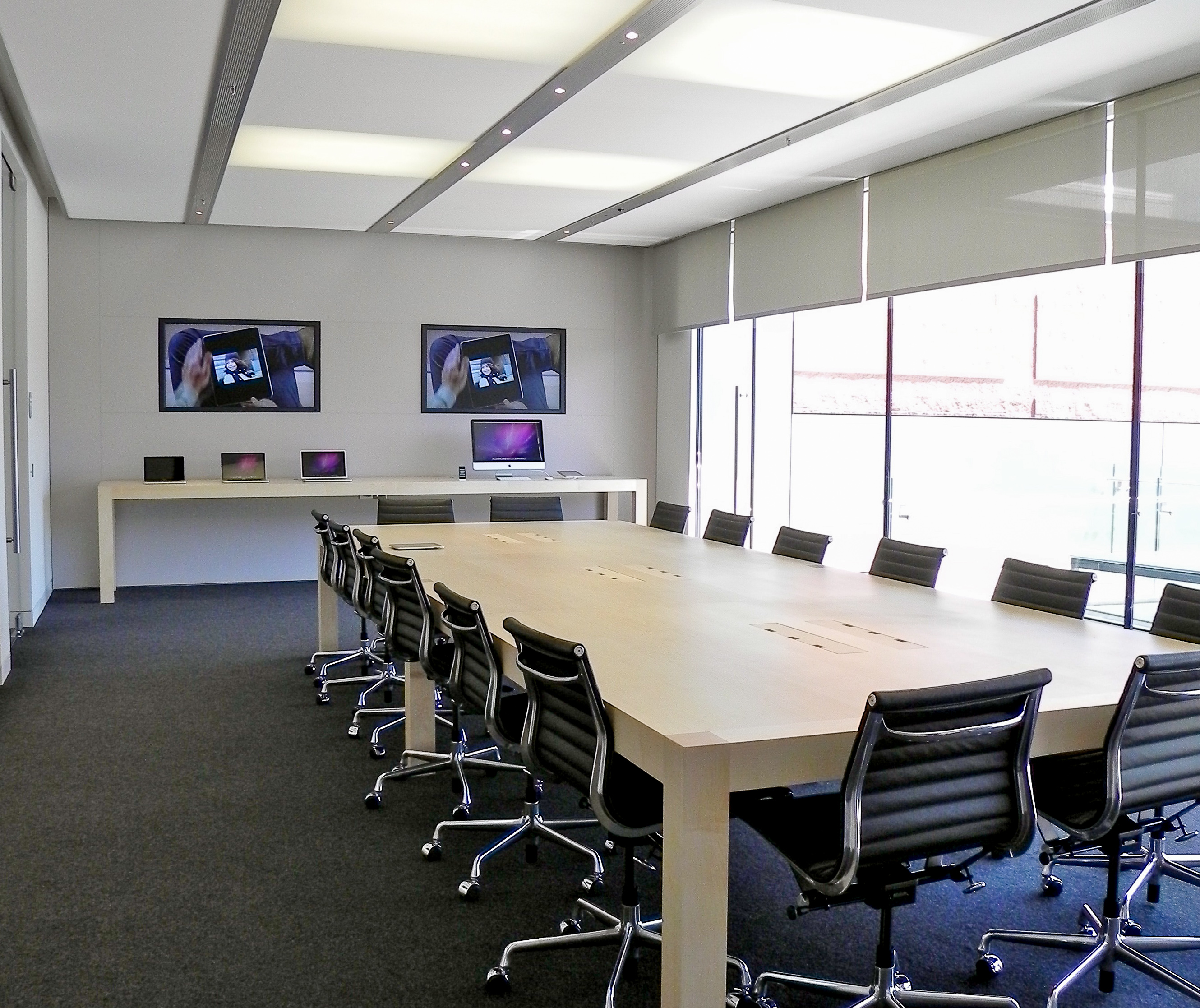 While Boardrooms are opulent spaces filled with luxury goods, Briefing Rooms are typically more utilitarian and use tables, shelving, and benches matching the design of the main store area. Current product lines fill wall tables, and product marketing posters are hung around the rooms. Wall-to-wall dark gray carpeting is common. One notable exception is Apple Puerta del Sol in Madrid, which contains a brick-lined subterranean Briefing Room with white tables and cabinets I haven’t been able to identify. 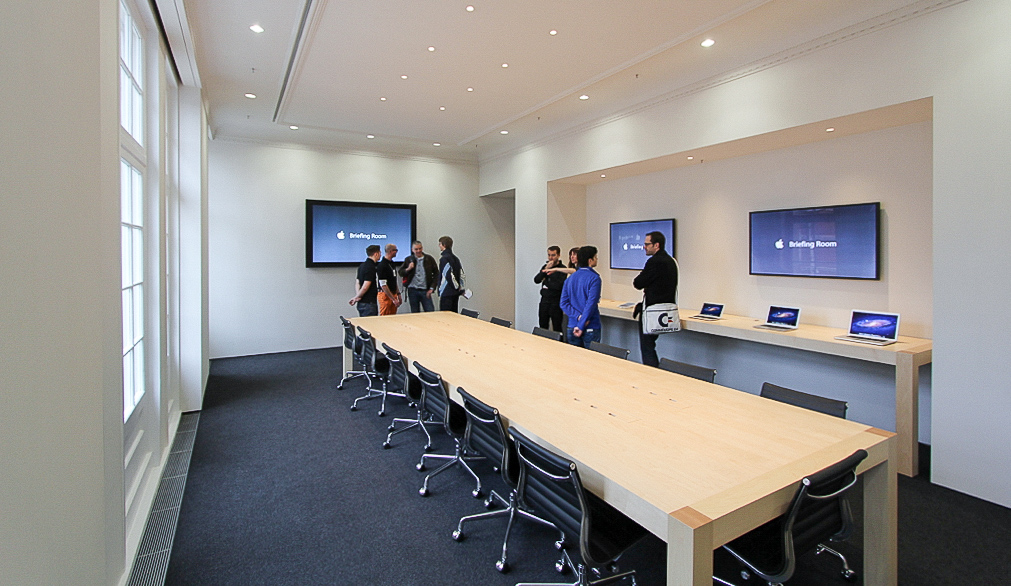 Around each conference table sits a set of Eames Aluminum Group Management Chairs with Pneumatic Lifts. Apple uses a version of the chairs without arms. At Apple Amsterdam, a group of black Barcelona Chairs by Ludwig Mies van der Rohe fills the lobby. At Apple Kurfürstendamm in Berlin, a separate area in the Briefing Room holds black PK22 easy chairs and a glass PK61 coffee table from Poul Kjærholm. 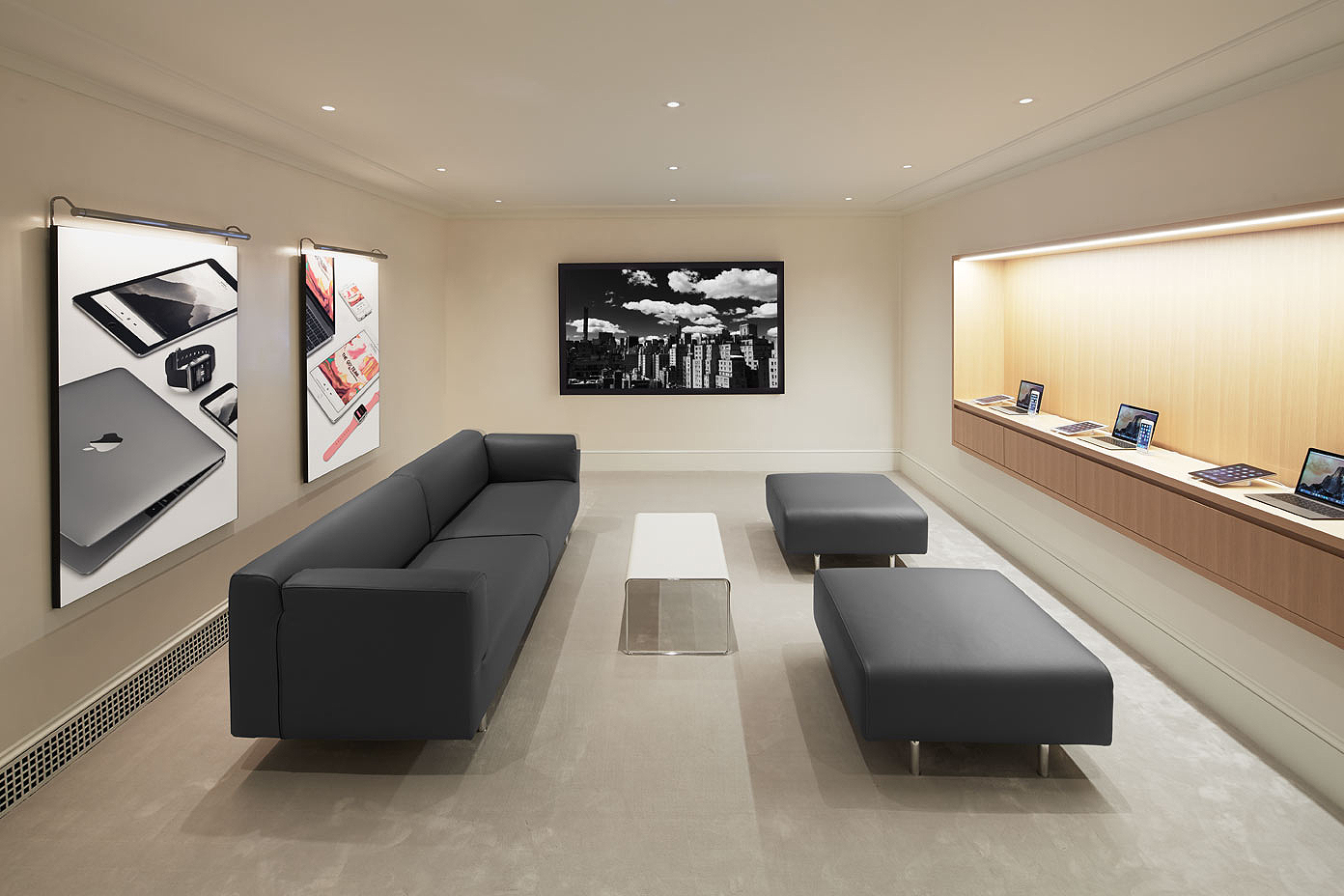 One of the most unique rooms in any Apple Store around the world is at New York City’s Apple Upper East Side. Once home to the U.S. Mortgage & Trust bank, the store still contains the original bank vault, now repurposed into a room resembling a hybrid Briefing Room, Boardroom, and Experience Room. Initially, the vault was positioned as a place for Apple Watch Edition try-ons.

The Upper East Side store opened in June 2015, just three months before Apple’s new retail design language was unveiled in Brussels, Belgium. Many of the store’s fixtures resemble prototypes of designs now common in every new store. This extends to the vault, which contains its own unique collection of furniture.

If you have additional information on any Boardroom products or suggestions of similar furniture, drop me a line. Follow 9to5Mac’s retail guide for in-depth coverage of the latest Apple Store news.