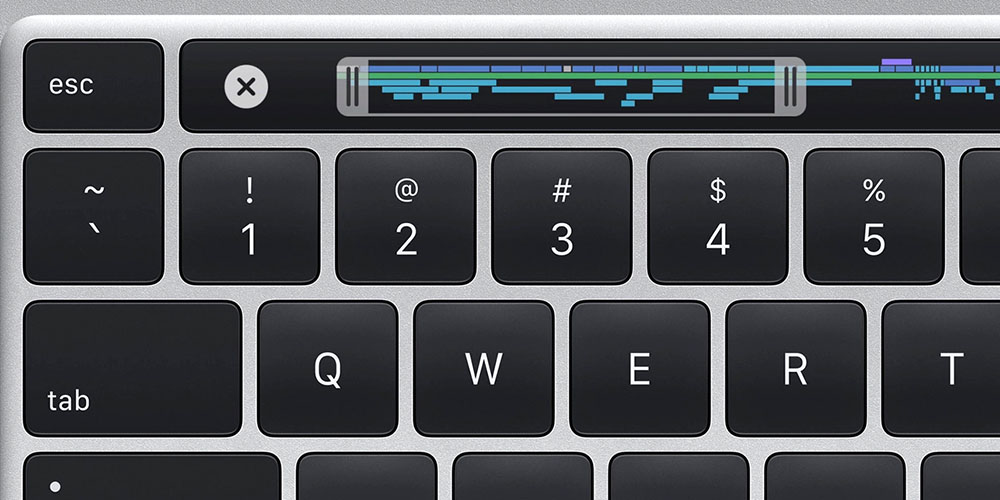 If I were writing a conventional review, my 16-inch MacBook Pro review would be a little late to the party. But my Diary pieces are all about how my impressions build over time with real-life use, so it’s less important in this case that I took delivery of mine exactly a month after it first went on sale.

I hadn’t initially planned to buy it because, on paper, it simply didn’t seem to be enough of an upgrade:

Playing with it for about half an hour in an Apple Store hadn’t really changed my mind: this was still something of a distress purchase for me…

The machine arrived shortly before I started work on Friday, so all I had time to do was the initial setup and then set in progress the migration from my clone. That all went without a hitch.

I hadn’t quite met my goal of being 100% prepared for the Catalina upgrade by the time the machine arrived, but I was 95% of the way there. I have to install the new version of Office I’ve bought, as well as a few other bits and pieces like download new software for my scanner. Not helped by the ScanSnap Home Setup app sitting there at 0% complete forever. My main pain-point in terms of Catalina will, I think, be the switch from Lightroom 3 to Lightroom CC – with its very different user-interface. We’ll see how that goes.

Having had flu last week gave me more time with the machine than expected over the weekend: while I was feeling human again, I didn’t want to pass it on to friends and was still pretty tired, so had cancelled my weekend plans in favor of an extended appointment with the sofa. I’m not much good at doing nothing, though, so ended up doing some writing and photo editing, all of which meant I had a reasonably good initial impression of the machine by the end of the weekend.

So, what are those impressions as I write chapter one of my 16-inch MacBook Pro review?

First, Apple has pulled off a good trick in terms of squeezing the slightly larger screen into a machine that has only very marginally larger dimensions. The reduced bezel size also gives it a significantly more modern look.

The screen is only a little bigger. A boost from 15.4 inches to 16 inches in the diagonal isn’t a dramatic one by any means, but to my surprise, it does feel a little more spacious.

The boost in resolution makes less difference, in my view. I mean, yes, it looks great, but so does the 15-inch one. I honestly think you have to be staring at it from an incredibly unrealistic distance to tell the two apart. 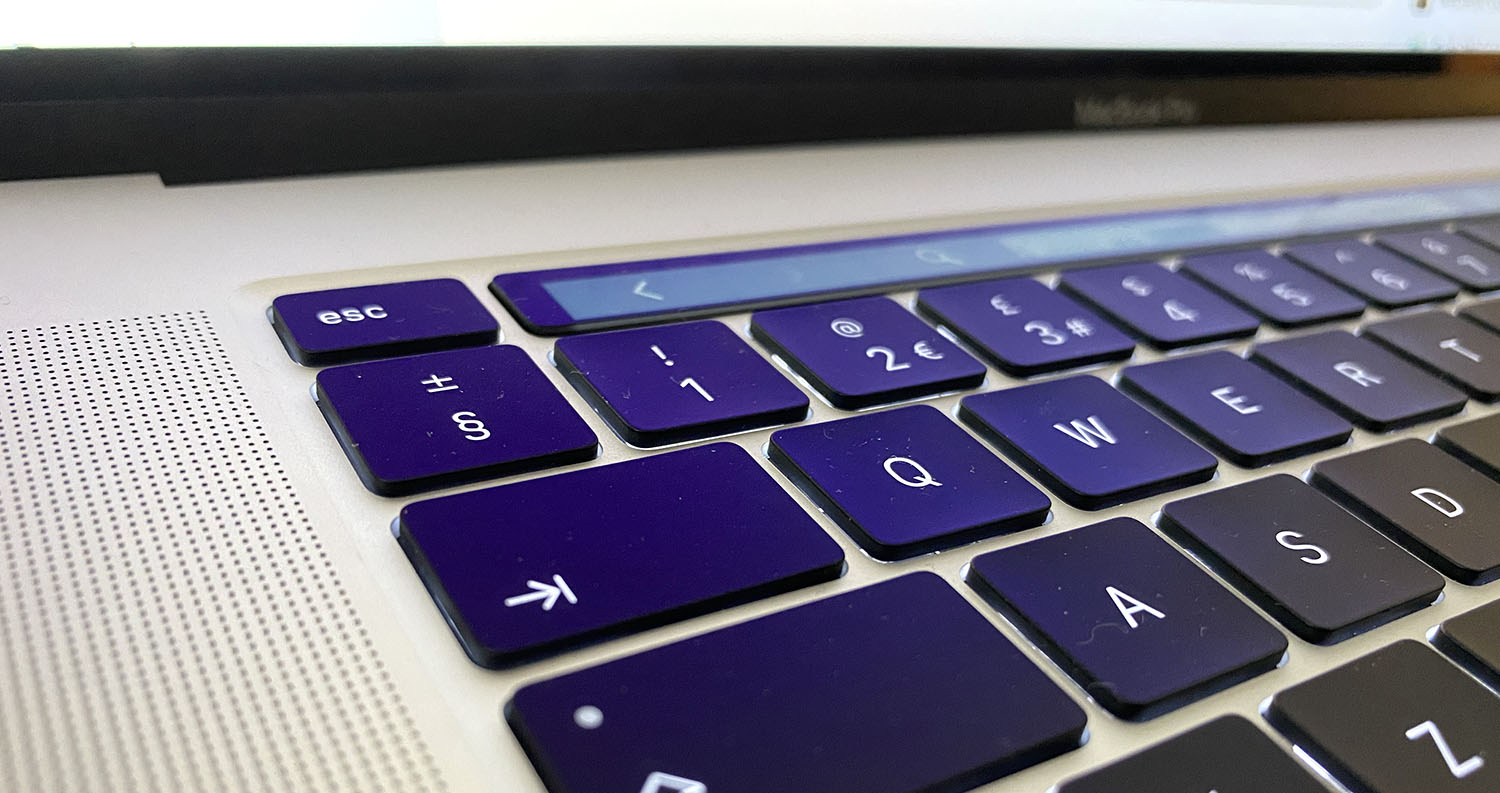 I’ve said before that I’m very adaptable where keyboards are concerned. For that reason, I didn’t expect to find typing on the machine a particularly different experience from its predecessor – this was all about reliability for me.

However, I was wrong. My fingertips appreciate the more cushioned movement, and I think my girlfriend appreciates the reduced typing noise when she’s sat next to me on the sofa. Even without the reliability issue, the keyboard is in fact a worthwhile upgrade.

The physical escape key also surprised me. While I know it’s a huge deal for developers, I didn’t expect to really notice it, but it’s surprising how often you use the escape key in everyday usage, and it is much more pleasant now your finger can find it.

It’s the same with the standalone power/Touch ID key. Authenticating is a much smoother experience when you can more easily place your finger on the button. Apple has also switched from a capacitive reader to an optical one, and fingerprint reading now works better too. With the previous model, I would sometimes experience fingerprint ‘bouncing,’ where it reads the fingerprint the first time but then prompts me to do so again. I haven’t experienced that once with the new machine.

The slightly larger gap between the physical keys and Touch Bar doesn’t look like much of a difference, but it seems enough of one to do the job. I did used to accidentally activate Siri relatively often when reaching for the backspace key on my 15-inch machine, and that so far hasn’t happened once on this one.

I don’t use the arrow keys much, so the fact that it’s easier to find them by touch makes little practical difference to me, and I’m not a fan of the aesthetics of the new gaps, but I recognize that’s a worthwhile tradeoff for those who do use them a lot. 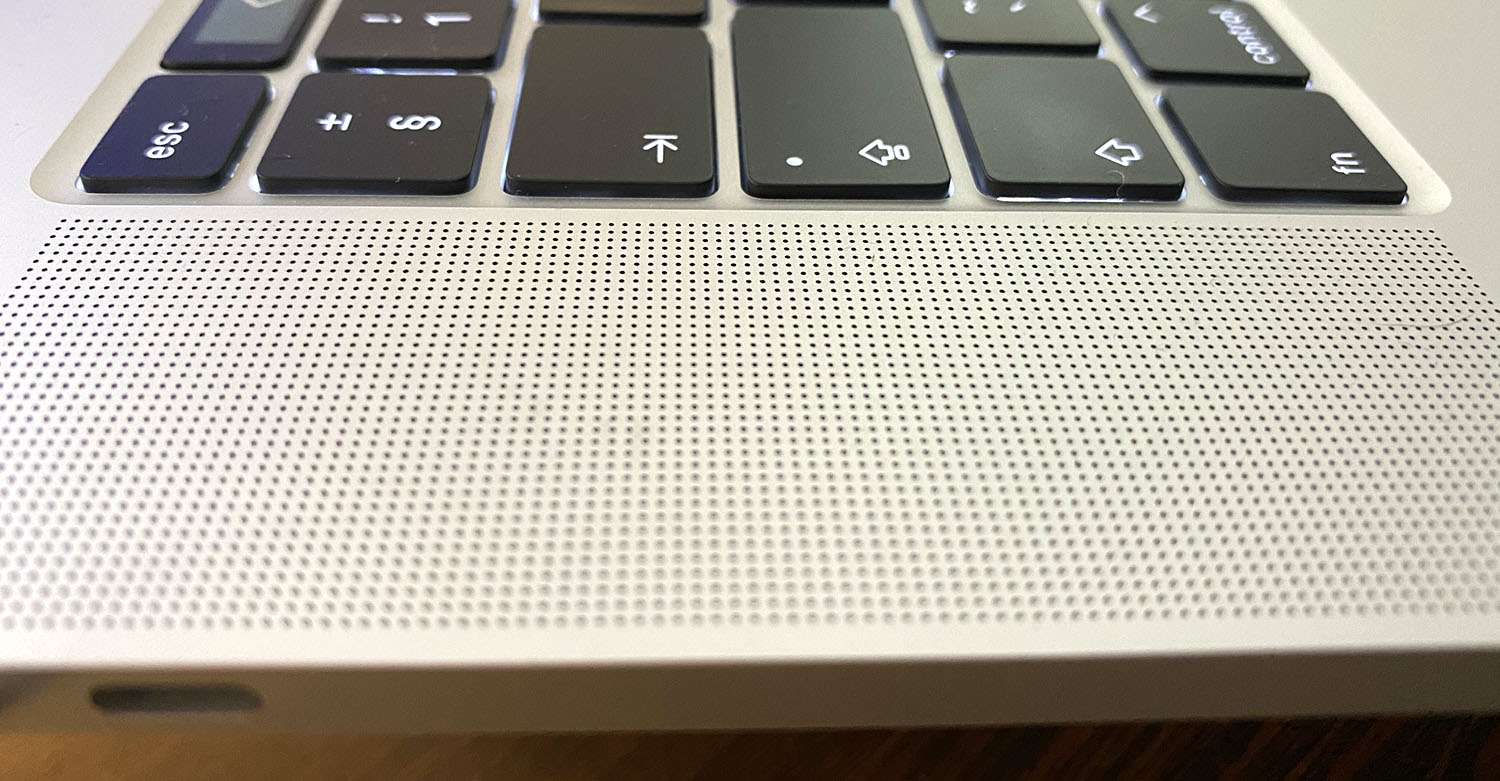 Some of the reports I’ve read about the speakers have gotten a little carried away! They are not room-filling, they are not hifi.

However, hyperbole aside, they are a substantial improvement in both volume and quality. I’ve so far taken a small Bluetooth speaker with me when travelling, but I won’t bother now: the built-in speakers are now of similar performance.

Yeah, I know some people think I’m nuts, but I explained last time why I opted for the expensive upgrade to 4TB.

First, we are a very long way still from an always-connected world. Coffee shop WiFi, plane and train journeys, and just the general annoyance of having to wait for stuff to download. For that reason, I like to carry a lot of stuff on-board my laptop, including all my photos.

I find I can just never predict what I might need. For example, as part of my planned upgrade to Catalina, I decided to shift my travel blog from my own website to a WordPress site. Once I began that process, I realised I wasn’t happy with my photo editing efforts from many years ago, so I’ve been reprocessing the photos as I do it. Which means I’m regularly accessing photos from ten or more years ago. Thanks to having everything on board, I was able to get some of that done on a recent flight.

I find the only predictable thing about what I might want to access is, if it’s not on my built-in storage, at some point I’m going to wish that it was!

Second, I want to feel like I’m getting some concrete value from the upgrade. Doubling my storage from 2TB to 4TB is that very concrete value. For example, I can now put back all the video footage I offloaded, some of which I’m again going to want to re-edit at some stage. Again, it just means I can put unexpected free time to good use when travelling. I appreciate that kind of flexibility even though I absolutely acknowledge that it’s a relatively expensive luxury.

I’m definitely not regretting it! I’m currently at 1.7TB used, having put back the archived video footage. Mostly I just luxuriate in the knowledge that I’m never going to need to even think about storage during the anticipated three-year life of the machine.

I don’t yet have any idea of the real-life battery usage – I’ll report back on that once I have enough experience of it. In general, I got about half Apple’s claimed 10-hour life from my old machine, so I’m expecting the extra hour of claimed life here to be worth 30 mins in real-life use.

In theory, the 96W power brick is a pain. I’m lazy where chargers are concerned, so have one each in the office, living room, and winter garden, and wouldn’t be impressed if I had to replace the two 87W spares from the 15-inch model with beefier new ones. However, the machine happily charges at a decent rate while I’m using it from any of my existing chargers, so that’s not an issue in practice.

I will need to test it with the OneAdaptr Evri I use when travelling, but as 87W works fine, I’d be surprised if 80W didn’t do the same.

So far, my initial view hasn’t really changed in essence. I still think this is a hard upgrade to justify over its 15-inch predecessor, and it does remain one I probably wouldn’t have made otherwise.

But there is that ‘probably’ addition to the statement now. The keyboard does make a bigger difference than I expected. The speakers are enough of an upgrade that it’s knocked an item off my travel checklist. That additional storage means I’ve been able to restore my archived video footage. Maybe I’ll get an extra 30 mins battery-life, which will be handy in a few situations.

So none of it is groundbreaking, but it’s a list of small improvements that add up to something I’m glad to have, even if I’d otherwise likely not have spent the money. It’ll be interesting to see whether that changes over time.

If you want a more detailed initial 16-inch MacBook Pro review, check out Jeff’s video (below). If you too have made the switch, or are thinking of doing so, please share your own thoughts in the comments.