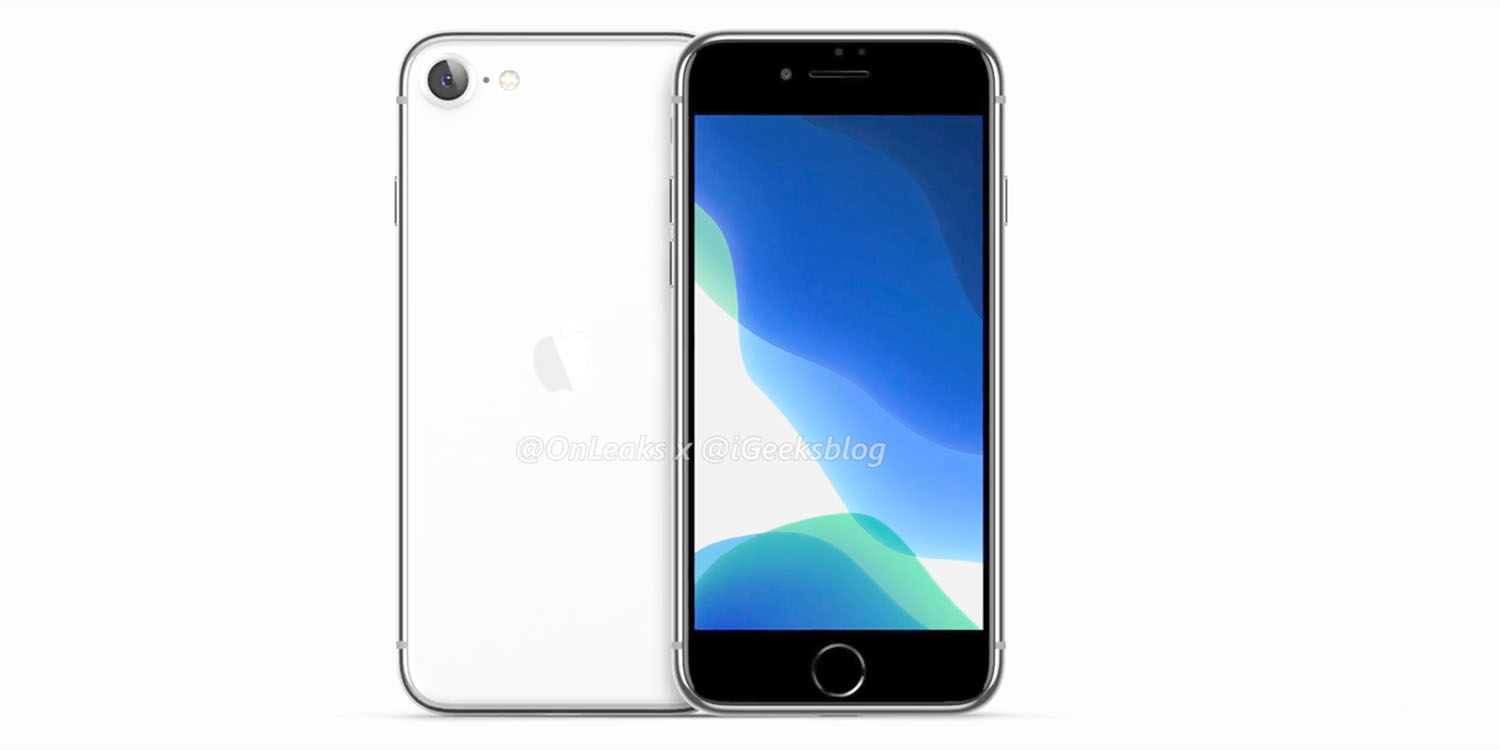 Instead of a glossy glass back, there is a frosted glass one, like the iPhone 11 Pro finish. The Apple logo is also vertically centred as per all three iPhone 11 models…

In all other respects, the renders show something identical in form factor to the iPhone 8, matching reports that the new entry-level iPhone will essentially be an iPhone 8 with A13 chip — and without 3D Touch, as Apple has now abandoned this tech in favor of a long press.

This is the new budget iPhone expected to belatedly replace the iPhone SE in Apple’s lineup. It has commonly been referred to as the iPhone SE 2, but with a very different design, this may not be the name Apple uses. Perhaps what’s more likely is that Apple brands the model as the iPhone 9, as it would logically sit between the iPhone 8 and iPhone X: more advanced internals than the iPhone 8, but lacking the near-bezel-free design of the iPhone X and later models.

It was reliable Apple analyst Ming-Chi Kuo who first suggested that the device would effectively be the same design as the iPhone 8. He also said that it would have a $399 starting price, would be available in 64 GB and 128 GB versions, and would have a red color option.

In the TF Securities report, Ming-Chi Kuo says that he expects the iPhone SE 2 pricing will start at $399. It is particularly targeted at incentivizing owners of iPhone 6 and iPhone 6 Plus, who cannot update to iOS 13 this year. Currently, Apple sells the 64 GB iPhone 8 new for $449. Presumably, the iPhone SE 2 would at least match that pricing.

The original iPhone SE debuted back in 2016 at $399 for a 16 GB configuration. When Apple discontinued the SE in 2017, the entry price had dropped to $349 and the base storage capacity had been doubled to 32 GB.

We’re expecting the iPhone 9/SE 2 to be announced in the spring. One sketchy report suggested that there would be two entirely different models, not just color and storage options. It’s possible that this instead refers to a rumored Plus model in 2021. Kuo has suggested this could be a significantly different design, as a halfway house between old-school Home button models and current Face ID ones.

The 2021 followup to the iPhone SE 2, which Kuo refers to as the ‘iPhone SE 2 Plus,’ will reportedly feature an all-screen design without a Home button. Kuo predicts this device will have a screen size of either 5.5 inches or 6.1 inches.

Interestingly, Kuo says the iPhone SE 2 Plus still won’t include Face ID authentication. Instead, Apple is reportedly planning to integrate Touch ID into the power button on the side of the device.

Check out the iPhone 9 video renders created by iGeeksBlog below.