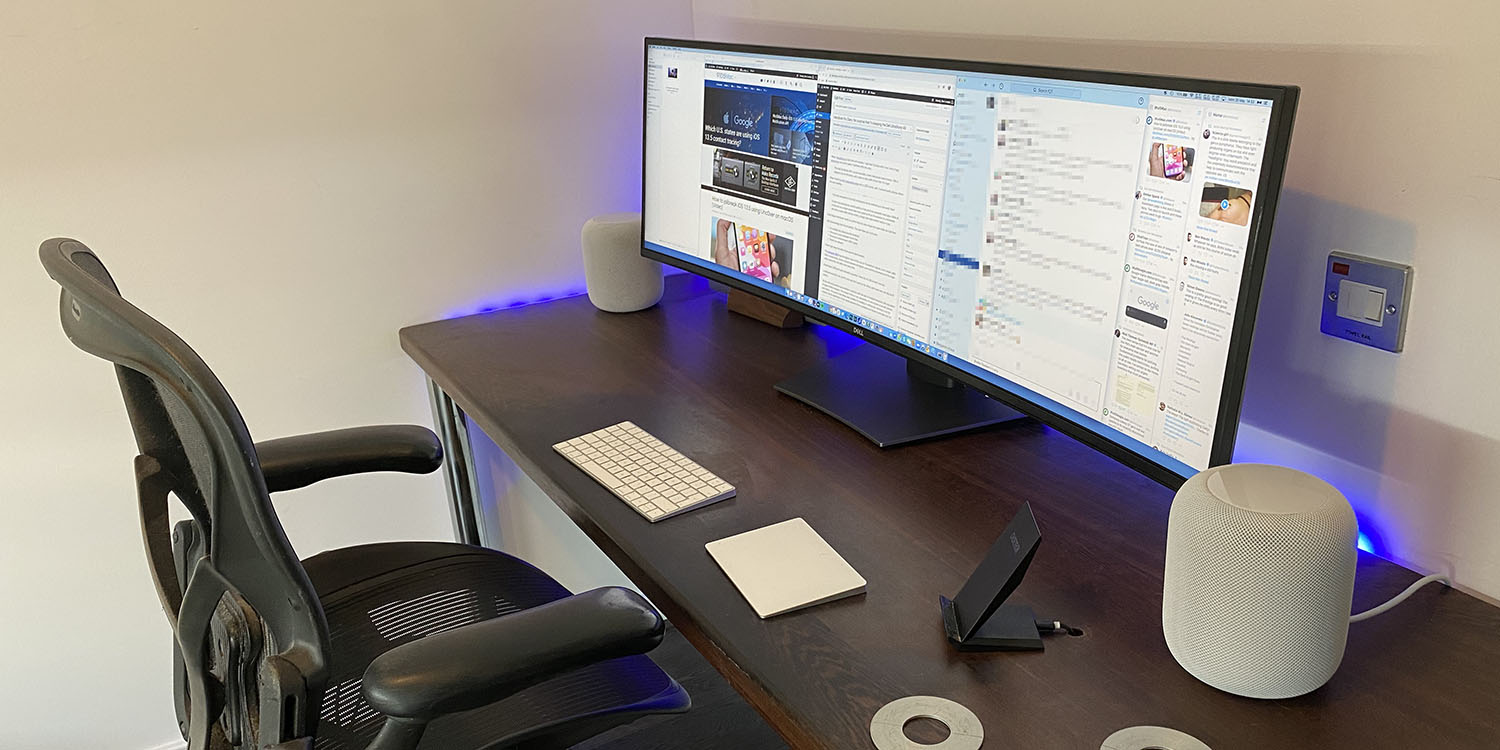 Ten days later, it’s time for my Dell UltraSharp 49 verdict – which will come as no surprise to anyone, I think.

When I decided to try Dell’s 49-inch monitor, I said that I’d lusted after it ever since it was announced, but all the same, it did feel a little bit crazy …

The Dell UltraSharp 49 is, by any standard, a fairly ridiculously-sized monitor. With a diagonal size of 49 inches, and a side-to-side width of four feet, it’s huge!

When my first impressions piece turned out to run to 2,000 words, it seemed pretty obvious where this was heading.

The most important of my initial conclusions can be summed up in one word: Wow!

It looks truly spectacular, and the ability to have all of my constantly-used apps visible all of the time on a single screen feels every good as bit as I’d expected. As a minimalist who likes a clean desk without clutter, a single ultra-wide monitor setup is a joy.

It will require a lot fewer words to confirm that my view remains the same today as it did then.

I did acknowledge that it’s not perfect. The main flaws are, in my view:

I knew right away the latter three weren’t deal-breakers.

Downstream USB ports are irrelevant in practice: I have lots of USB-A ones I can use.

A webcam would be nice, but it’s very rare that I use it in the office, and I have one I can dig out if I need it.

So the only real question was whether I could live with the lack of doubled resolution (the equivalent of Apple’s Retina display). The answer to this is: yes, absolutely. It’s not a factor at all with photos and videos – it’s purely a text thing. And, whether I’m reading or writing text, my focus is on the content, not the aesthetics. It has simply proven to be a complete non-issue in everyday use; I’m only aware of it when I look for it.

The less-than-optimum curve has meant that I do scoot my chair from side-to-side a little when working with the windows at the extreme edges of the monitor. But that hasn’t in any way felt like a problem. When I worked with the Apple Thunderbolt Display and MacBook Pro display off to the left, I would turn somewhat to face the laptop when I was using that window; this feels no different.

I’ll be the first to admit that some of my usage of the full width of the monitor is ‘because I can.’ Keeping a Finder window open for the Downloads folder (which I use as my all-purpose intermediate file-storage area) is an extremely trivial convenience over a single-click of the Finder icon in the dock to open it. But I do use it for every piece I write (for the accompanying image), so given I have the space for it, why wouldn’t I?

I was of the same view with the four messaging apps constantly visible on my Home desktop. But actually, this has proven more useful than I expected: it’s nice to just see immediately that I don’t need to respond to a message.

I haven’t yet actually used it as a movie screen, and remain doubtful that I will do so on any kind of regular basis. But we have been enjoying all the streaming theatre performances available during the lockdown, so once we’ve completed the living room revamp with a couple of more portable chairs, I could see us using it once a week or so until theatres re-open.

My Dell UltraSharp 49 verdict is: I absolutely love it. It gives me the productivity I want, combined with the minimalist look I crave. For the first few days, I got pleasure from it every time I sat down in front of it. But perhaps the biggest compliment I can pay it is, it now feels totally normal. This is how a monitor setup should be. I couldn’t imagine sending it back.