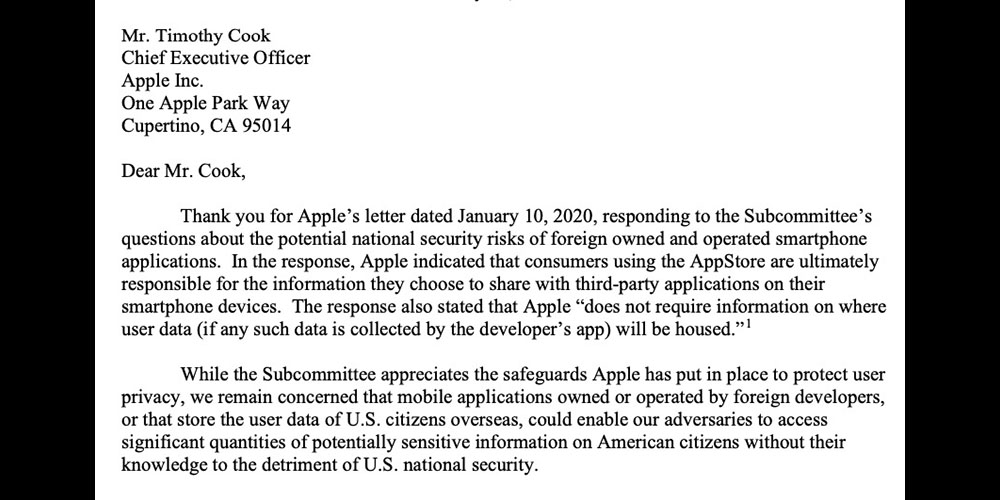 Apple and Google should warn users about the ‘national security risks’ of apps developed by foreign entities, says the chairman of the congressional Subcommittee on National Security, Rep. Stephen Lynch.

The letter seems carefully worded to refer to China and Russia without ever explicitly saying so.

While the Subcommittee appreciates the safeguards Apple has put in place to protect user privacy, we remain concerned that mobile applications owned or operated by foreign developers, or that store the user data of U.S. citizens overseas, could enable our adversaries to access significant quantities of potentially sensitive information on American citizens without their knowledge to the detriment of U.S. national security […]

Mobile applications developed, operated or owned by foreign entities present a potential national security risk because developers can deliberately code kill switches, backdoors or vulnerable data streams into mobile applications that allow access to the application’s software, application-generated data, or even—in some cases—the device itself, and because application owners/operators can filter, censor, corrupt, intercept, and illegitimately divert or share data generated by applications.

Lynch says that it would not be reasonable to go as far as banning foreign apps, or to require them to store user data on US servers, but Apple should alert users of the App Store to potential privacy risks.

As an industry leader, Apple can and must do more to ensure that smartphone applications made available to U.S. citizens on the AppStore protect stored data from unlawful foreign exploitation, and do not compromise U.S. national security. At a minimum, Apple should take steps to ensure that users are aware of the potential privacy and national security risks of sharing sensitive information with applications that store data in countries adversarial to the United States, or whose developers are subsidiaries of overseas companies.

The letter calls on Apple to answer four multi-part questions by the end of the month.

The letter to Google is identical, simply substituting the company name.

Popular video-sharing app TikTok has come under increasing fire, Secretary of State Mike Pompeo going so far as to say the White House was considering banning the app from the US. It is also being investigated by the Justice Department to see whether it broke promises made last year to address child privacy concerns. TikTok insists that all data for US users is stored on US servers.