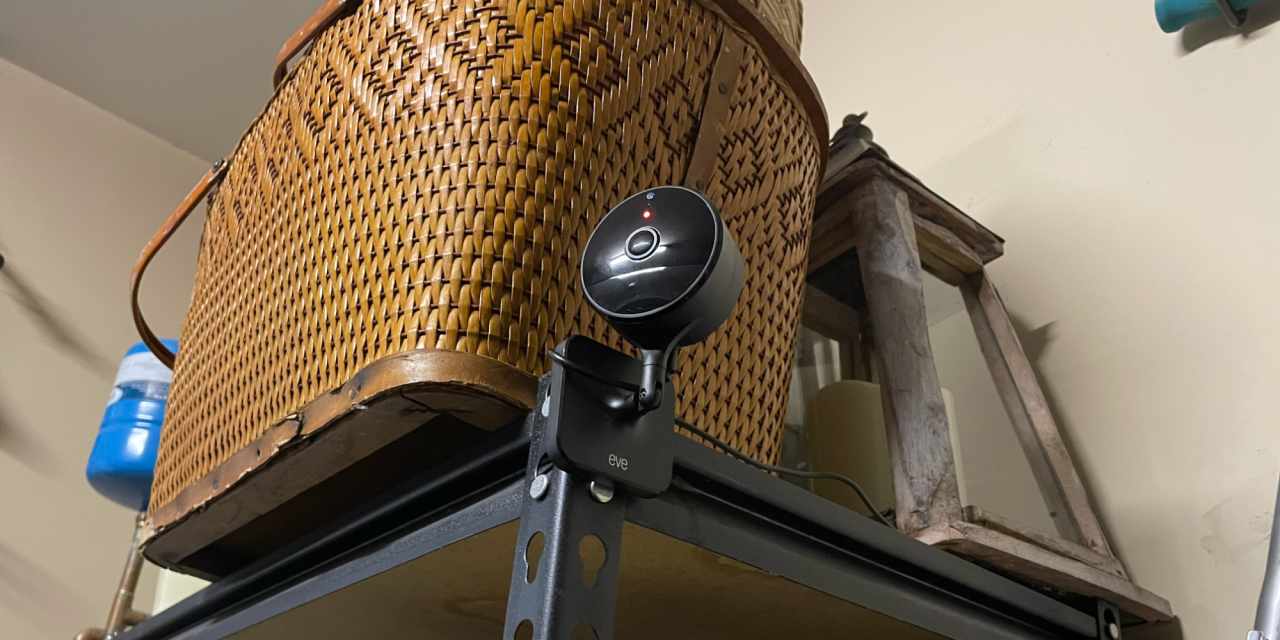 As I mentioned a few weeks ago, my wife and I purchased some land that I am starting to think through what some of the HomeKit setup I will end up having as I’ll install everything during construction instead of having to retrofit it. One of the things I am thinking through is cameras. There are several ways I could go. Part of me thinks I should stick with the eufyCam setup I have now, but then part of me wants to look at something hardwired to power like the Logi Circle View. To better prepare my decision-making, I am attempting to test all of the HomeKit cameras on the market to see what I want to include in our new house. This week, I am taking a look at the Eve Cam.

I’ve mentioned in the past that Eve is one of my favorite HomeKit vendors. I own almost everything they sell, so if you’re looking for a top-notch HomeKit enabled surge protector, door sensor, light strip, or water detector, Eve is a great vendor to start with when researching products.

The Eve cam is a similar build to the Logitech Circle View that I reviewed back in January, but it doesn’t include as robust of housing because it’s only meant for indoor usage. Unboxing the camera will take just a minute, but there are a few pieces you’ll need to assemble. The camera is a separate piece, so you’ll need to pick your country-specific AC adaptor and connect the included USB cord. Having the USB cord detached from the camera is a convenient feature because you can swap it out in the future to use a longer (or shorter) cord or replace it if the end becomes damaged.

Like other Eve products, it’s purpose-built for HomeKit, so you don’t need another app when setting the camera up. The only step you need to take to configure the camera is to scan the included QR code inside the Home app, add it to a room, and then set your recording preferences. All cameras with HomeKit Secure Video support have recording options to meet all levels of desired security. When you are home or away, they can be set to:

For the cameras inside my house, I have them set for sensor only when we are home, but I am putting the Eve cam inside my garage, so I will always stream and record it. The Eve cam includes a magnetic base, so you can easily stack it on something that’s metal and it’s holding itself in place. Last summer, Eve updated the Eve app to allow for flipped orientation that will reverse it inside the Home app as well. This feature is helpful if you want to mount the camera under a shelf or on the ceiling.

Automations in the garage

Now that I’ve got a camera in the garage, I will experiment with HomeKit automations when it detects motion during the day. I will create one that turns on specific lights in our living room when it detects motion indicating someone is coming home. If you don’t have a HomeKit compatible garage door opener, putting a camera in your garage will also be a handy way to verify if your garage door is shut or if you left it open.

The Eve cam is a strong option for one of the best indoor HomeKit cameras. Eve has continued to make top-tier HomeKit products. While there are less expensive options, I like the camera’s build quality and the opportunity to use a different USB cord if you wanted to change it out in the future. Since the camera is HomeKit only, be sure to use an app like HomePass to store a backup version of the HomeKit code.