Early Tuesday morning, Google Reader finally closed its doors, but not without a plethora of alternatives launching. We’ve covered all sorts of them before, including Feedly, Digg Reader, AOL Reader, and much more. One of the most popular RSS apps for iOS is Reeder, and it has been updated to support some of those alternatives.

After launching a private beta of its new Google Reader replacement, Digg announced today that it is now rolling out the beta to all users signed up to test the new app. Digg just sent out the first batch of invites to the new web app, but promises it will be “adding users in increasingly larger batches.”

The app is still a work in progress and won’t get you every feature you might have had with Google Reader, but for now you can easily import your Google Reader content, use Google Reader-like shortcuts, and save and share to all the usual third-party services.

iOS versions of Digg Reader land for iPhone and iPad in the App Store sometime today, and Digg says an Android app will be available before the end of July.

Digg warns that the app is still very much in beta, but reminds us of a few features it plans to add in the coming months:

Following Google’s announcement that its RSS Reader product would be retired on July 1st, apps like Feedly that relied on the Google Reader backend announced big plans to help itself and other apps through the transition. Feedly has been preparing its move to its own “feedly cloud” back end since the announcement, and earlier this month transitioned its own iOS client to the platform. Today, Feedly is officially launching the new back end and API, as well as a brand new web interface and the first apps to integrate the feedly cloud platform:

As of today, feedly cloud is now live, providing a fast and scalable infrastructure that serves as the backbone to feedly, as well as a number of connected applications. Feedly cloud is open today to all users visiting http://feedly.com, providing a simple one-click migration path from Google Reader.  And thanks to the great developer community that has gathered around it, providing multiple safe and sound alternatives to Google Reader.  With the release of feedly cloud, feedly today transitions from a product to a platform. We are also today delivering a new, completely stand-alone Web version of feedly.

On top of the new API and feedly cloud back end, the company is also delivering on one of the most requested features for the service: a standalone new web interface that doesn’t require any plugins or browser extensions.

While there are many others trying to provide an alternative for Google Reader, Feedly tells us it’s had significant traction since Google’s announcement and hit 12 million users at the end of May. That’s up 8 million from the 4 million users it had before Google announced Reader would be retired back in March. It’s also currently processing around 25 million feeds a day.

As part of its ‘Normandy’ project, Feedly has been building its own backend and API for third-party RSS apps and readers that also previously relied on the Google Reader API. It isn’t the only one: Earlier this week Digg teased images of its Google Reader replacement coming to the web and mobile devices on June 26th. It too is planning to offer an alternative API for third-party devs.

Today Feedly is announcing the first apps to integrate with its new backend but promises more will be added in the coming weeks as more than 200 developer have shown interest:

Developers and users interested in learning more about the new and improved Feedly can do so here.

Feedly offers one-click migration from Reader to its service to ensure an easy transition and reminds us just 10 days remain before Google Reader officially shuts down.

A big update today for the Flipboard app for iPhone and iPad brings new profile pages that will allow content creators to get info on their “readership and curation activity,” a new Friends category in the Content Guide, improved sharing options including SMS, and the ability to save to your camera roll by tapping on an image.

The updated app, version 2.0.2, also includes “Improved navigation for Google Reader RSS folder,” making it easier for those making the switch from Google Reader to find their content.

-Get a window onto your readership and curation activity with new profile pages. -Discover magazines by friends quickly in new Friends category in the Content Guide. -Select a social network and access options more easily in the improved share menu. -Share magazines and stories with friends and family via SMS text messaging. -Save images directly to your device. Tap item’s share icon, then “Save to Camera Roll.” -Improved navigation for Google Reader RSS folders

Review: Feed Wrangler for iOS, RSS for the modern world 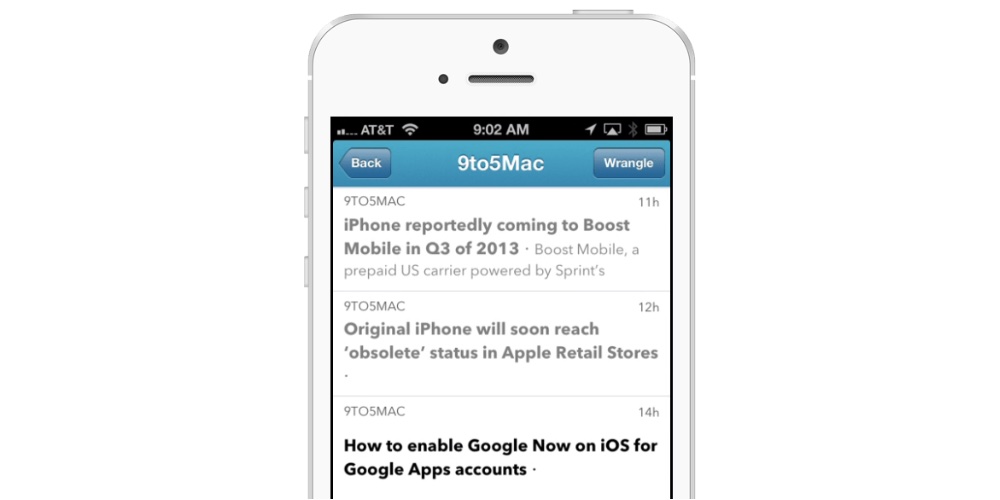 Google Reader is dead. We know this for certain as Google announced earlier in March that it plans to pull the plug on its RSS service on July 1, 2013.

Google’s announcement caught the good people of the Internet by surprise and left us wondering, “What next?”

David Smith, developer of Check the Weather and My Recipe Book, believes his new app Feed Wrangler for iOS has answered that question in a way that fixes the problem that led to Reader’s demise.

END_OF_DOCUMENT_TOKEN_TO_BE_REPLACED

Google announced on the Official Google Blog earlier this month that it will retire Google Reader on July 1, 2013, but the brains behind Reeder, a Google Reader client, clarified that development of its apps will continue after July 1. Moreover, since explaining what’s in store for Reeder, both the Mac and iPad apps are now free starting April 1.

This doesn’t seem to be an April Fool’s joke, either, as Apple’s App Store and Mac App Store currently reflect the price drops.

Feedly for iOS, another Google Reader client, updated to version 14 today and brought a new and improved Feed Search and Discovery function, as well as a Title Only View, Must Read section, and more control over layouts.

The update also enhanced Sharing & Save for Later and allows customization of Favorite Sharing Tool to social networks and Favorite Save for Later Tool to Pocket. Version 14 even added a “mark as read” card at the end of each sections, a pull-to-refresh ability in the home selector, and fixes for a logout bug.